You are here: Home / Featured / One year later: health care by the numbers

Exactly a year ago, the Halifax Examiner reported on a rally in downtown Halifax that attracted about 75 people concerned about overcrowded emergency rooms, inadequate mental health services, and too few places for seniors requiring long-term care.

The rally was advertised through a Facebook group called “Nova Scotia Healthcare Crisis.” Among those in the crowd were three outspoken Emergency Room physicians from the Valley Regional Hospital. To relieve congestion in the hallways of the publicly funded ER, they had taken the unusual and controversial step of starting a GoFundMe campaign to find alternative placements for patients who were seniors.

One of the speakers was Paula Minnikin, a business management consultant whose former jobs included leadership positions at Xwave (a former BellAliant company) and the environmental science, engineering, and consulting firm, Jacques Whitford. 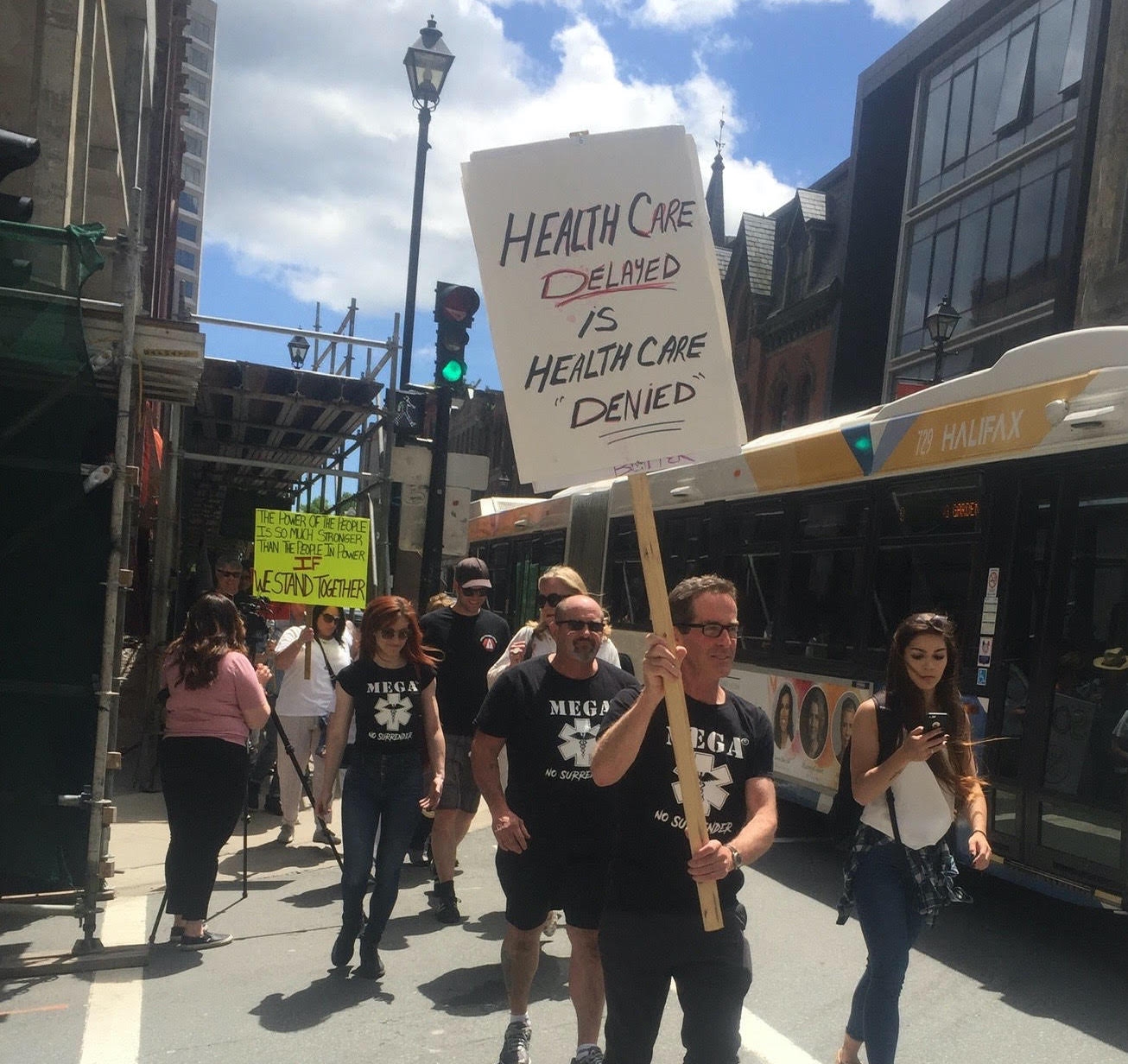 Minnikin, who bills herself as “a numbers person,” believes health care won’t improve until certain numbers do. She presented her most important numbers to the crowd that day, and later submitted the list to the Health Committee of the Nova Scotia Legislature.

One year later, the Health Committee is no longer meeting — first due to COVID-19 and then because the McNeil government decided not to recall it. But Paula Minnikin is still speaking up. We’ll get to her “By the Numbers, 2020” update in a moment.

But first, it’s worth knowing the outcome of a meeting between Health Minister Randy Delorey, Seniors’ Minister Leo Glavine, and the Nova Scotia Healthcare Crisis group.

According to Minnikin, the group met last September. “We outlined the significant risk to the health care system and to Long Term Care if there was a ‘bad flu’ in the winter of 2020. We shared that there were troubling signs coming from Australia. We mapped out a plan that would see 1,000 temporary Long-Term Care beds set up in communities in existing spaces for the winter, including hotels and unused overnight addiction treatment beds. Caregivers would be hired from privately-run homecare agencies. The costs were reasonable, considering the average hospital stay costs about $6,082 in Nova Scotia. We did not know COVID was coming. But if the minister had listened, we can reasonably assume that there would not have been nearly as many deaths in Nova Scotia.”

Minnikin says the group was told “health care is very complex” and its proposal was “too simplistic.”

The following is her update. 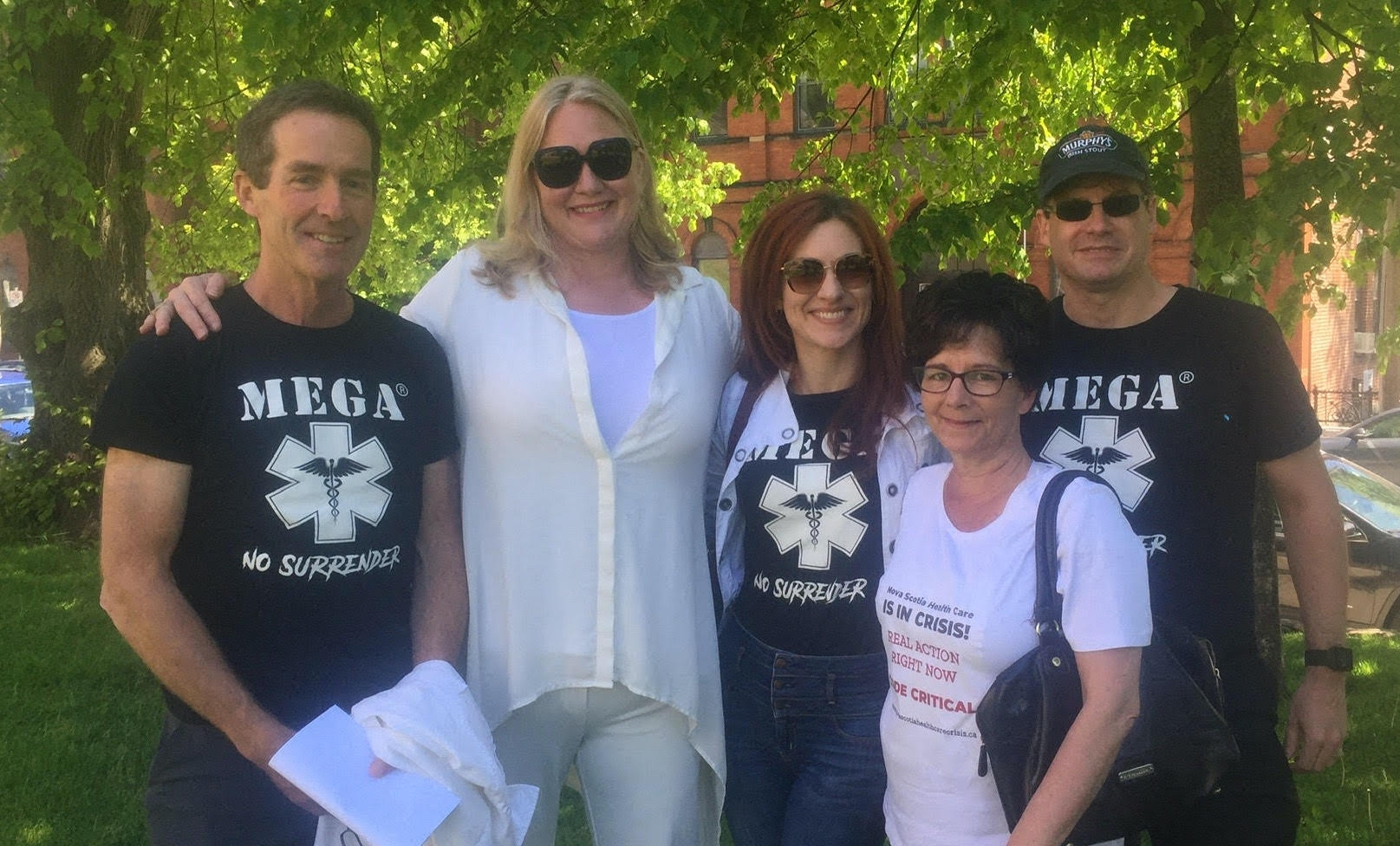 Minus 2 (-2): Dr. Rob Miller and Dr. Keith MacCormick are no longer working as ER physicians at the Valley Regional Hospital. Miller and MacCormick are working as replacements for ER doctors in other provinces. MacCormick is also working in another part of Nova Scotia. Dr. Rebecca Brewer fills in for vacationing doctors at other hospitals and still works part-time at Valley.

Zero: Zero is how many Black, Indigenous, people of colour, and differently-abled Nova Scotians are included on the Nova Scotia Health Authority (NSHA) Board of Directors.

One: We’re number one or number two when it comes to how much we spend administering the health care system — the bureaucracy. Only Ontario spends more of its total health care budget (5.8%) on administration. The Canadian average is 4.5% and Nova Scotia spends 4.7%, according to numbers provided by the Canadian Institute for Health Information (CIHI) for 2018-2019.

But Ontario has a much larger population than Nova Scotia, which means that on a per person basis, our costs may be the highest (CIHI is working on that calculation now). Meanwhile, a spokesperson for the Nova Scotia Health Authority told the Halifax Examiner, “When we responded a year ago regarding administrative expense per capita (including both NSHA and IWK), our data showed administrative expenses of $125.18 per capita, which is 26% higher than the national average.”

That’s a decrease of less than 1% (0.9%). What is unclear is the “net” number of new hires after you’ve subtracted the number of family doctors who retired or left the province. At this rate of less than 1%, Minnikin projects it could take 12 years before the Nova Scotians on the wait list get a family care provider — and that’s before the peak of the Baby Boom hits their 70s.

Let’s skip ahead to the bottom of Minnikin’s “by the numbers”.

Seven: Last year Nova Scotia Healthcare Crisis reported our doctors were paid about seventy percent of the average Doctor’s pay across the country.  Minnikin says, “We have seen some improvement in this area. Our doctors are now third last in Canada and earn 78% of the national average.”

Eight …representing $800 million. That’s roughly the amount the Nova Scotia Healthcare Crisis group claims the Department of Health is asking Treasury Board to approve for the implementation of an electronic health record system known as “One Person One Record.”.

Last year, that number stood at $500 million. “Can you imagine any other government investment of that much money going forward with this little transparency or this little public discussion?”, asks Minnikin.

Yes, actually. How about the rationale for choosing a P3 model to replace the aging Victoria General Hospital? Those government documents remain secret.

Heather Fairbairn, a spokesperson for the Department of Health and Wellness, tells the Examiner the nature of all submissions to Treasury Board are “confidential.” Although an RFP was issued to two prequalified suppliers (Allscripts and Cerner) in 2018, a vendor has still not been chosen. “After a pause in March 2020 due to COVID-19, we expect to receive final proposals from the vendors soon,” said Fairbairn.

Nine: There were NINEteen Emergency Room closures over a single weekend by June 15 last year, which is when the Nova Scotia Healthcare Crisis rally was held. By the end of 2019, the number of temporary, unscheduled ER closures had doubled from the previous year. The province’s emergency departments were closed for a total of 48,783 hours, or 9% of the time.

This year, the ER at the Musquodoboit Valley Memorial Hospital has been closed 1-2 days a week due to what the NSHA describes as, “physician resourcing changes” over the past number of months. The 2020 numbers will be completely skewed by ER closures related to the pandemic.

Ten: Last June, Minnikin stated she found, “10 to 14 layers of unaccountable and muddled management” within the NSHA. One year later, she claims, “There has been a shuffling of chairs, but no actual reductions in administration have occurred.”

Minnikin’s statement in June 2019 was disputed last August by the former Health Authority CEO, Janet Knox, on her way out the door. In an Opinion piece in the Chronicle Herald, Knox said, “Our organizational structure includes 5 levels of management on average, not ‘10 to 14.’ The average number of employees reporting to a direct supervisor is 29, not 3.25.”