You are here: Home / Featured / Nova Scotia health care by the numbers 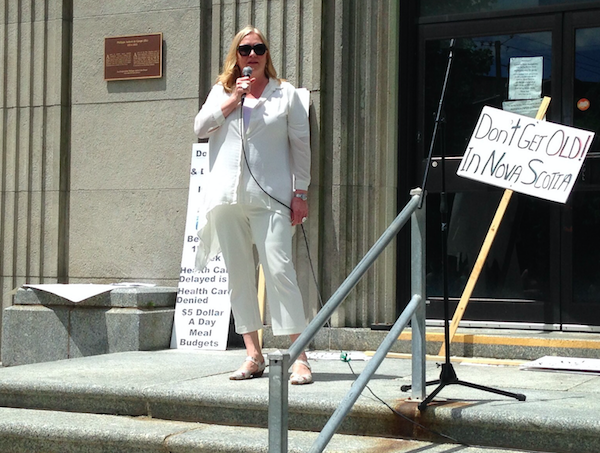 A rally organized by a citizen who started a Facebook group called “Nova Scotia Health Care Crisis” attracted about 75 people in front of the former library on Spring Garden Road Saturday afternoon. They included three frustrated emergency room doctors from Valley Regional Hospital who began a GoFundMe campaign to raise money for new long-term care beds. ER doctors Robert Miller, Keith MacCormick, and Rebecca Brewer told the audience overcrowded ERs and “hallway medicine” will continue to be the norm as long as 20% of hospital beds are occupied by people who are waiting for a place in a nursing home. They wore black T-shirts that say “Make Emergency Great Again.”

The rally also attracted citizens concerned about inadequate mental health services and long-term care for seniors. But the most interesting speech and loudest ovation was for Paula Minnikin, a former vice-president with xwave (an IT spinoff from Bell Aliant) and former Chief Technology Officer with engineering firm Jacques Whitford.

Minnikin, not unlike the broadcaster character in the film Network, is “mad as hell and not going to take it anymore.” Here is an abridged version of the speech she gave to the rally for health care:

Good afternoon, I’m Paula Minnikin. I’m not a doctor, I don’t work in health care. I work in corporate governance and technology which means I work with numbers for public and private corporations within Canada and internationally. So, yes, I am pretty good with numbers. Today I am here to share some numbers however but I am not okay with these numbers.

1. We’re number one. We lead Canada in the cost of Health Care Administration, per person. We spend 35% more than the Canadian average managing how we deliver health care.

2. Retiring family doctors have two or sometimes three times the patient case-loads of new family doctors. The Nova Scotia Health Authority allows for a one-to-one replacement. This makes zero sense. Officially, there are 90 family physician vacancies in Nova Scotia. And for every day the NSHA drags their feet on hiring them? We get sicker and they save money.

3. Patients waiting — in pain — for a knee replacement in Halifax wait almost three years, or 897 days. That number is from the NSHA website today.

4. Four-week slowdowns. Yes, in the middle of this health care crisis, there are planned and deliberate reductions in service. There is a “March Break slow down,” a “summer simmer,” and a “Christmas Quiet.” In what other business, with this kind of backlog, would you schedule slowdowns to reduce capacity? Because the NSHA can then congratulate themselves on meeting their budget.

5. We are fifth. Nova Scotia is smack dab in the middle of the pack in healthcare spending. We spend 40% of the provincial budget on health care. In Canada that is average so we need to push back when we are told we expect too much. We just spend it on the wrong things, like administration.

6. Six is the number of solutions offered by Dr. Jeannie McGillivray in Antigonish. A surgeon who practiced without one complaint in more than 20 years. She was attacked by a nameless, faceless administration. There were zero consequences for them. But not for her 300 patients with scheduled surgeries who were stranded. And not for the doctor herself.

7. Seven-ty percent. Doctors in Nova Scotia are paid about 70% of the average compensation across the country. We are dead last in terms of pay received by medical doctors.

8. About 800. That’s how many salaries employees of the Nova Scotia Health Authority who make more than $100,000 a year. I’d have no trouble with these salary levels (and more) if we had results. But the results just aren’t there, consider we are paying 35% more than the rest of the country for last place results. Are you okay with this? I’m not!

9. NINEteen. 19. That’s how many Emergency Room closures are listed on the NSHA  “Temporary Closures page” for today. NINEteen.

10. Ten to 14. Depending on who you ask and how it is calculated, that’s the number of layers of management at the Nova Scotia Health Authority. The best practices of successful healthcare administrations suggest there should be no more than five levels. “Best practice” worker-to-supervisor ratio is eight-14 workers per manager. At the NSHA, it’s closer to 3.25 workers per manager. The problem is not on the front lines.

And just one more number…it’s a big number: half a billion, with a B. That’s how much we are spending right now on the electronic medical health record project called OPOR for “One Patient One Record.” Can you imagine any other government investment of half a billion dollars going forward with so little transparency or public discussion? Do you trust this health care administration to manage it? This same administration that has had so many privacy breaches I can’t actually count them?

I said I’m good with numbers. But I am not “good” with these numbers. I hope you aren’t either. When the rally changed to this location in front of the former public library, I was pleased. We should listen to that man over there. “Never Give In.” The real Winston Churchill (not the statue), shared those words during a speech he gave in 1941. We should heed them.