You are here: Home / Featured / PRICED OUT

The images of baton-wielding and pepper-spraying police violently moving protestors from city workers’ path so that people living in tents could be evicted from the Memorial Library lawn and so that shelters could be torn apart with a chain saw is perhaps the most stark recent example of just how dire Nova Scotia’s housing crisis has become — but it’s not the only example.

Rising housing prices have been making a material difference in people’s lives for years. As rent increases by $100, $200, $500, and more a month, people are moving to lower quality apartments, moving farther from their jobs and schools and grocery stores, living with roommates or family, and often, couch surfing or sleeping rough. The percentage of their income going to rent increases, so the percentage going to quality food and medication and their kids’ clothes goes down.

When housing prices increase, quality of life goes down. People work more and longer hours. Their commuting time increases. Stress and mental anguish build. Time with loved ones is shortened or eliminated.

A tiny silver lining in the pandemic was the imposition of rent control, which supposedly prevented landlords from increasing rents by more than 2% annually — albeit plenty of landlords have found they can exceed the limit through renovictions and other work-arounds.

And now, as Nova Scotia heads into Phase 5 of the reopening plan, short-term rent control is set to expire. In his first televised press conference since the election, Premier-Designate Tim Houston said in no uncertain terms that rent control will be lifted as the state of emergency ends. 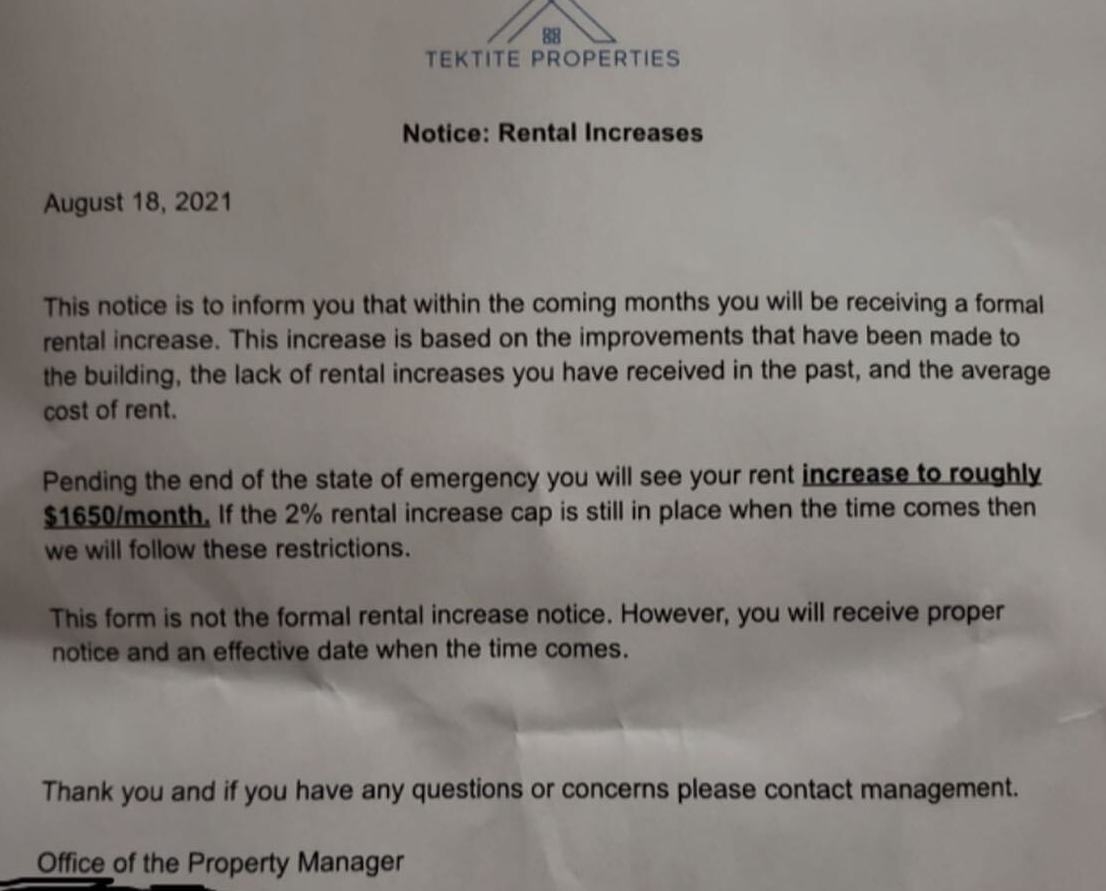 A typical example of recent letters from landlords to tenants, this one advising of a planned 109% increase in monthly rent (from $790 to $1650) as soon as the state of emergency is lifted. Photo contributed

In anticipation, landlords are sending letter to tenants, advising that when rent control is lifted they can expect to see monthly rent increase by many hundreds of dollars, and sometimes over $1,000. Just as COVID is winding down, the housing crisis will become even more of a widespread emergency, affecting people across the income spectrum.

The Halifax Examiner is therefore focusing its entire reporting team on these issues, with a investigative series we’re calling PRICED OUT: Addressing the Housing Crisis.

Given the breadth of this crisis, we’re asking for your help in deciding what we should report on, and from what perspective. That’s why we have an ongoing series of reader engagement sessions hosted by Examiner editor Suzanne Rent; we’ve already assigned reporters to stories based on what we’ve heard from readers, but there’s still plenty of time to be heard. You can call or text our housing reporting project message line at 1-819-803-6215, and tell us your story or your concerns.

Our work so far: 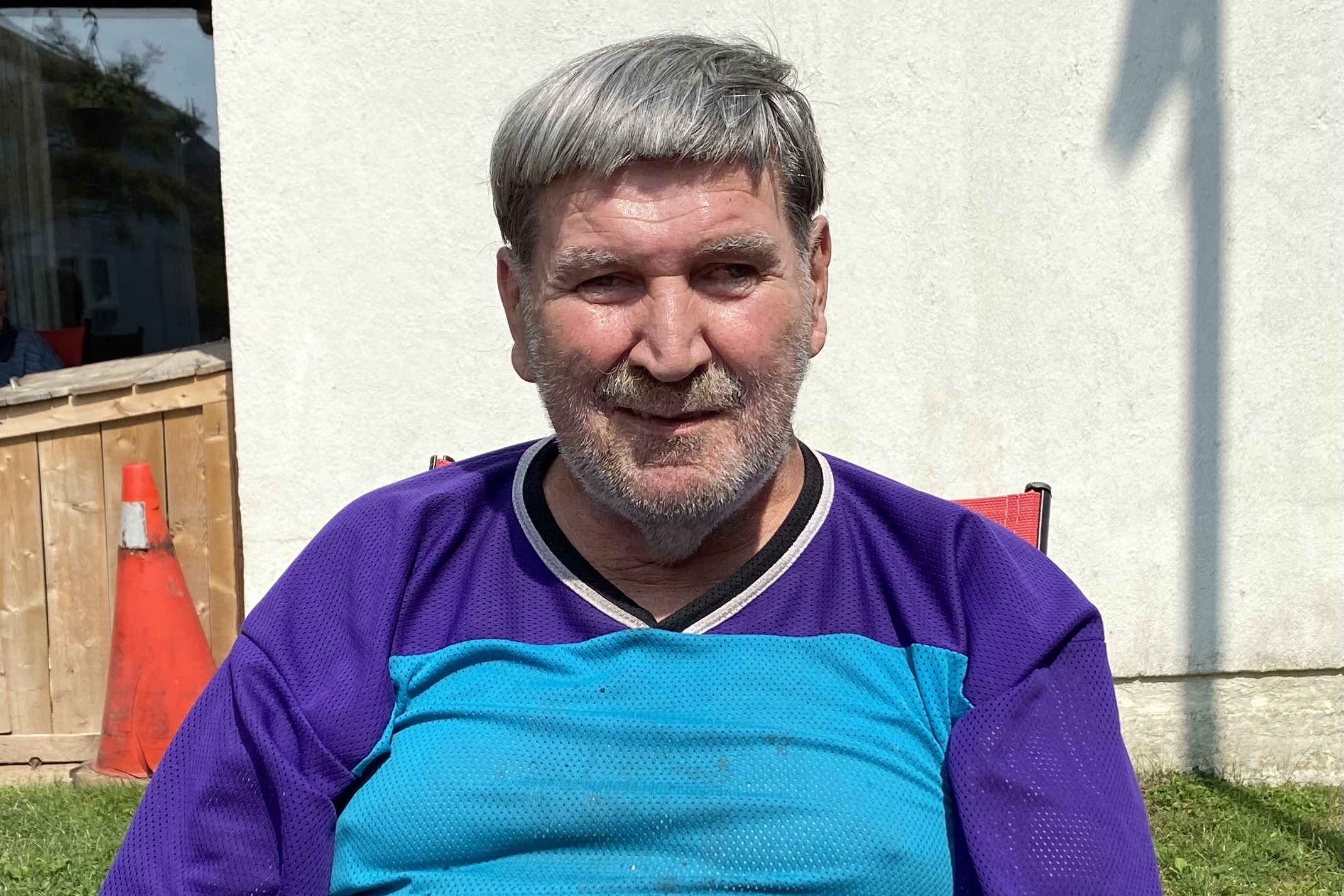 72. Women and gender diverse people are disproportionately affected by the housing crisis. Are we doing enough? (June 23, 2022, by Suzanne Rent)

59. Municipal staff recommend allowing tents at a handful of Halifax-area parks (May 2, 2022, by Zane Woodford)

54. Tenants still holding out hope for Highfield, but concerns about trash, repairs, and staffing remain (April 14, 2022, by Suzanne Rent)

53. Renovictions spike, but let’s not forget the plight of landlords (Morning file, April 12, 2022, by Philip Moscovitch)

43. Province moves to speed up development approvals for 22,600 housing units in Halifax, but none of them are guaranteed affordable (March 25, 2022, by Tim Bousquet)

36. Tenants could be living in ‘trailblazing’ Dartmouth housing project by mid-March (January 27, 2022, by Zane Woodford)

32. Staff and advocates rally to save emergency shelter set to close this month (December 17, 2021, by Ethan Lycan-Lang and Leslie Amminson)

30. “Call back the house until everybody’s got one:” Protestors demand province call emergency session of legislature to deal with housing crisis (November 28, 2021, by Ethan Lycan-Lang and Leslie Amminson)

27. As winter approaches, residents of People’s Park, volunteers, and neighbours wait for a better housing solution (November 12, 2021, by Ethan Lycan-Lang)

25. Environmentalists: climate change bill is good, but not good enough; Landlords: the rent cap hurts us and tenants (November 2, 2021, by Tim Bousquet and Jennifer Henderson)

20. Halifax police board seeks second opinion on its authority to review response to homeless evictions protest (October 18, 2021, by Zane Woodford)

18. City setting up trailers in Halifax and Dartmouth for people currently living in parks (September 29, 2021, by Zane Woodford)

14. Nickel and dimed: How landlords skirt the law to hang onto damage deposits (September 9, 2021, by Philip Moscovitch)

12. How 27 units of affordable co-op housing in Halifax were sold off for cheap (September 1, 2021, by Zane Woodford) 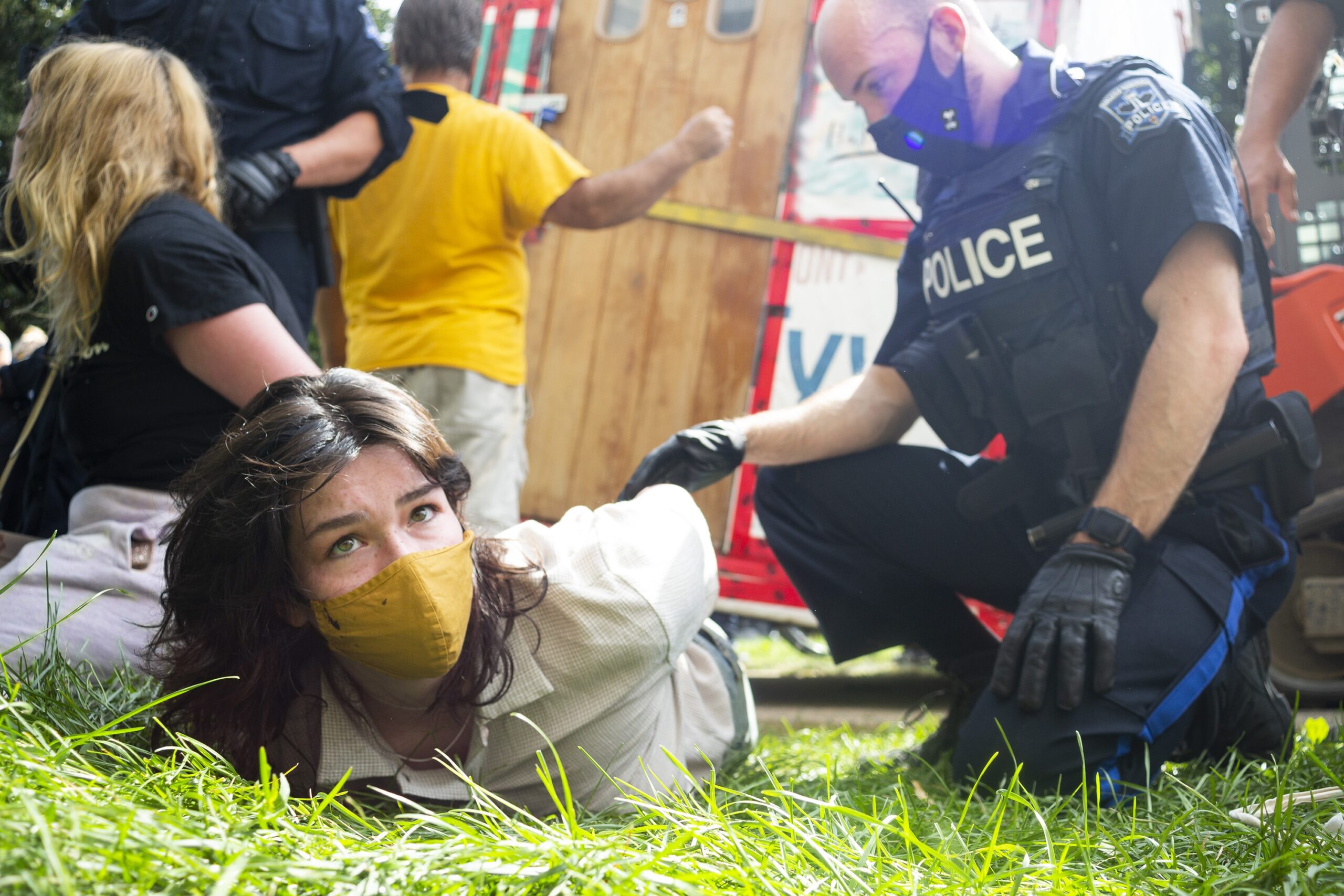 A protester under arrest lies on the ground in front of the shelter being removed from the Halifax Memorial Library property on August 18, 2021. — Photo: Zane Woodford

5. The Halifax Examiner has a telephone line dedicated to hearing your housing stories and concerns (Morning File, July 19, 2021, by Tim Bousquet)

1. Halifax threatens to remove temporary shelters if they’re still on city land in a week (July 6, 2021, by Zane Woodford)

7. Jen Powley: For a real smackdown on slumlords, demand that landlords be licensed (February 28, 2022, by Jen Powley)

3. Gaslighting Halifax: how the mayor, a councillor, and the chief of police created a false narrative about the violent eviction of rough sleepers from city parks (Morning File, August 20, 2021, by Tim Bousquet)

1. PRICED OUT, burned out, policed out: the deepening divide between the have-nots and the have-somes (Morning File, August 25, 2021, by Tim Bousquet)

Here’s what we’re working on:

We’ll compile a list of legal resources, organizations that can help, and otherwise help you work through your situation. What do you do when you’re faced with a landlord who won’t maintain the property or rental increases you can’t afford, and what can you do if you’re renovicted?

We’ll be putting human faces to the housing crisis by profiling everyday people facing real-world challenges in finding and maintaining housing they can afford.

Just how big is the crisis?

We’ll be using our skills at data journalism and court reporting to define the crisis: What are rental costs in terms of a percentage of income, and how has that changed over time? Who is being enriched by high rents? How much money is leaving the community as a result of out-of-town REITs buying up apartments?

We’ll be asking experts to weigh in on the rhetoric around rent control, and to what degree it can help take the edge off the crisis.

We’ve assigned African Nova Scotian reporter Matthew Byard to examine issues specific to the ANS community. What is the future of Uniacke Square? What does the housing situation in North Preston look like? How is Upper Hammonds Plains affected by white exurbia? How is a new sprawling development affecting the character of historic Beechwood?

We recognize that the housing crisis is not limited to the urban area, but is instead spread throughout the province. In fact, in some rural areas the crisis is even worse than in Halifax, as increased rents translate into much longer commutes and are pricing some people out of communities entirely. We’ll be assigning reporters to look specifically at the housing crisis in communities across the province.

Why aren’t non-market and public housing approaches much of a help in the crisis? We’ll be looking at Nova Scotia’s long and proud history of cooperative housing, and asking why governments haven’t supported that workable solution to affordability. And, we’ll look at one specific housing organization in Halifax that has been working quietly behind the scenes for decades to provide affordable housing for young families and asking if that effort can be duplicated and expanded.

In 2013, newly elected Halifax mayor Mike Savage joined a coalition of government and nonprofit agencies called the Housing and Homelessness Partnership, which promised to embrace the Housing First approach to homelessness — simply providing housing for people immediately and helping them deal with their life problems afterwards. The ambitious aim, said Savage, was to eliminate homelessness in Halifax in five years. Five years came and went, and now, rather ending the problem by providing housing, Savage is overseeing a city government that is siccing cops on the homeless. What happened? Why did the high idealism of the Housing and Homelessness Partnership fail? And, might it be resurrected and succeed?

The economics of housing

We’ll be asking: Does it have to be this way? Is it necessary that most housing should be at the whims of private landlords and the fickle market, or is there a better approach to housing generally? And, in the moment, we’ll be looking to document the effect of the increased financialization of the housing stock on renters’ lives.

But the list above is not exhaustive. Our reporting will grow and change depending on what we learn from readers. We really do want to hear from you!

Check back on this page often. We’ll update it with newly published articles, notices of community engagement sessions, and more.

We’d also like your help in another way. Because the housing crisis is affecting everyone, from all sorts of income levels, this reporting will be made free for everyone to read, whether they are subscribers or not. But of course, it costs money to do the work, to file the freedom of information requests, in some instances to pay for legal review, and to pay the reporters. If you are able, we ask that you please subscribe to the Halifax Examiner, or donate specifically to help fund PRICED OUT.