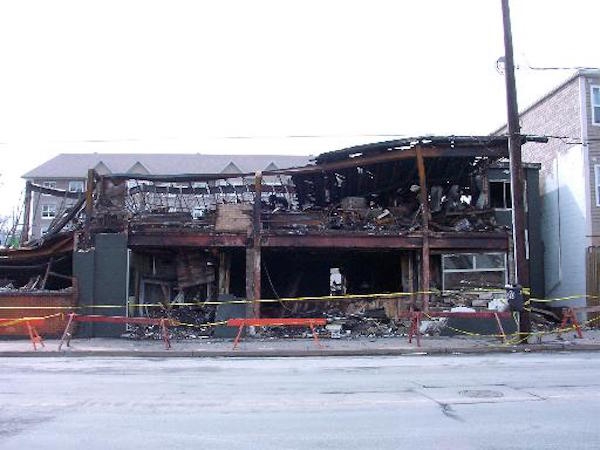 What remained of the North End Pub after it burned down in 2007. Photo: halifaxhistory.ca

A fire destroyed the North End Pub on March 7, 2007, but the insurance fight continues.

Local lore has it that the day of the fire there was a guy on a winning streak on the VLT machines who refused to leave on his own accord when the fire engines showed up, and so he had to be physically picked up and carried out of the burning structure. Later, the gambler tried to make a claim against the fire department for his supposed lost winnings. I’ve never been able to verify that story, but true or not, it captures the spirit of the pub.

Now, a cookie-cutter apartment building as uninspired as the rest of the dreck recently built in the neighbourhood is under construction on the site.

According to a recent court filing, the fire led to a “protracted insurance claim and ensuing litigation” involving Beaufort, Grafton-Connor Property Incorporated, and the insurance firms Marsh Canada and Lloyds of London. That litigation resulted in a 18-day trial in 2014; Justice Arthur LeBlanc ruled in favour of Beaufort, and ordered Marsh to pay Beaufort about $1.9 million.

Marsh made that payment, but also appealed the decision.

The issues involved were detailed in a decision written by Justice David Farrar for a three-judge appeal panel, as follows:

After an 18-day trial in the summer and fall of 2014, Justice Arthur J. LeBlanc, found that the policy was void as a result of material misrepresentations on the part of the insured.  He dismissed the claim of Grafton Connor against Lloyd’s, allowed the counterclaim by Lloyd’s against Grafton Connor, and dismissed the cross-claim of Marsh against Lloyd’s.  He found that Marsh was 50% contributorily negligent to Grafton Connor for the losses suffered in the fire (reported 2015 NSSC 195).

Farrar’s narrative goes on for some pages more, and provides an excellent background for the history of the Grafton-Connor group and for how business works in Nova Scotia.

Regardless, the court of appeals set aside the 2014 ruling, which meant that Beaufort, and therefore Grafton-Connor Property Limited, had to pay back the $1.9 million it had received from Marsh, plus the costs related to the appeal, plus interest.

Marsh now says it is owed $3,134,909.18, and Grafton-Connor hasn’t paid. Marsh is therefore asking the court to declare Grafton-Connor bankrupt and to force the company into bankruptcy proceedings.

That is, to put it mildly, remarkable.

“Correspondence recently received from the Debtor’s [Grafton-Connor Property] counsel which was issued to both Marsh and another creditor, a Halifax area discovery transcription service, clearly indicates that the Debtor is an ‘insolvent person,’ pursuant to the definition of that term,” writes Mark Cooper, Marsh’s lawyer, in the application to the court.

The Debtor’s representative has acknowledged that the Debtor is incapable of meeting even the most modest claims for payments due.

The circumstances leading up to the Debtor’s sudden insolvency, after decades of solvent operation, are worthy of investigation by a Trustee in Bankruptcy.

Cooper clearly is implying that some financial shenanigans have taken place.

The allegations contained in Marsh’s application have not been tested in court.

Should a bankruptcy be ordered, we will undoubtedly learn much more about the relationship between the Grafton-Connor Group and Grafton-Connor Property, as well as about Gary Hurst’s money and business practices. 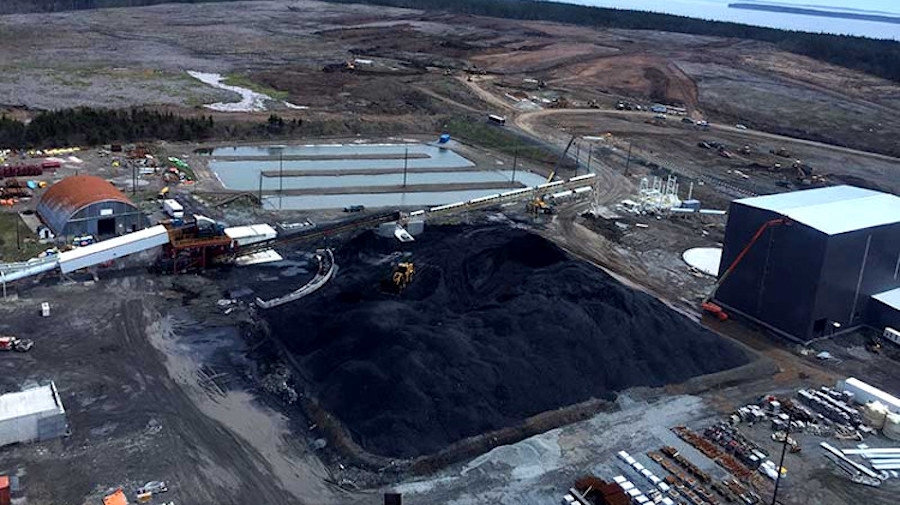 “Local experts say they aren’t surprised the roof of Cape Breton’s Donkin mine is subject to rock falls given the area’s geology, a week after the province shut down the operation following a collapse,” reports Tom Ayers for the CBC:

The area surrounding the mine near Glace Bay is considered geologically diverse with rock layers that vary from hard sandstone to soft clay.

Ayers goes on to interview three people about the geology of the mine area.

I’m also wondering why we only learned about the December 28 roof collapse on January 3.

There appears to be a non-permitted salt and snow removal depot operating at the former Ben’s Bakery site on Quinpool Road, and the noise of the trucks is upsetting nearby residents, reports Alexa MacLean for Global.

“A WestJet flight en route to Newfoundland returned to Halifax Thursday morning after declaring an emergency because of a possible problem with its landing gear,” reports the Canadian Press:

The airline says crew aboard WestJet Encore Flight 3428 got an indication of a potential issue with the nose landing gear shortly after takeoff at about 8 a.m.

Morgan Bell, a media adviser for the airline, says the flight landed safely after circling the airport to burn fuel and reduce landing weight.

The 82 crew and passengers were taken off the Q400 aircraft, which was to be inspected by the airline’s maintenance team.

This sort of thing happens quite often. All of such incidents are reported publicly by Transport Canada, but only a small number get additional press releases from the airlines or the airport.

Just as I look at a million other things on a regular or semi-regular basis, I still look at the incident reports on a regular basis, but it seems to piss a lot of people off when I actually write about them. To pick just one random incident as an example, last Thursday Jazz Flight 8998 didn’t take off from Halifax because it had a flat tire. That’s a good thing, and the system is working as it’s supposed to. But jeesh, make a joke about it and people start throwing statistics at me and calling me irrational and so forth. People seem invested in making the air travel industry off limits for curious eyes; no one gives me such shit for reporting on habeas corpus applications or tender offers.

You can learn a lot of stuff by reading reports carefully. For instance, because the pilot made a minor mistake on takeoff that was a reportable incident, I know that the corporate jet that usually carries Andy Cecere, the president and CEO of U.S. Bank, was in Halifax a couple of weeks ago. I don’t know why he was here, but I’m guessing we’ll soon be shelling out a few million dollars in public money so Cecere can bring us prosperity forever, amen.

Anyway, if anyone cares, there was a fox running around the taxiway the other day. I’m glad there’s still a healthy ecosystem out at the airport.

No public events this week.

I’ve got an early morning appointment and will be out of touch most of the day. I ran out of time to write about a couple of other things; I’ll return to them Monday.