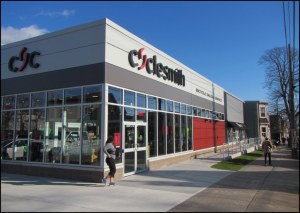 Cyclesmith, a bicycle sales and repair shop on Agricola Street in Halifax, announced on Thursday afternoon it now has a living wage policy for its staff.

Owner Andrew Feenstra spoke with the Halifax Examiner on Thursday evening, a few hours after Cyclesmith announced the policy via its Twitter account. Staff learned about the new policy on Wednesday night during a meeting (Cyclesmith also posted this new release on its website).

“Most people were in disbelief,” Feenstra said. “Some people ended up getting a $7/hr raise. Everyone in the room got a raise last night.

Cyclesmith has 20 full-time staff. Feentra said the policy is retroactive to Sept. 1. Part-time employees and summer/seasonal staff will receive at least 75% of the current living wage in Halifax. Any new employees will receive the living wage after the three-month probationary period. 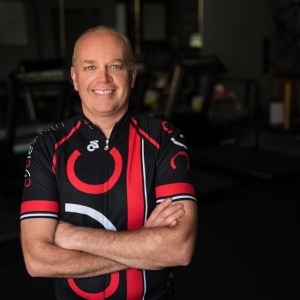 Feenstra said he’d been thinking about the policy for months now. Wages in retail are often low, so Feenstra said staff often move onto school or better paying jobs. He said they’d been working for the last number of years on increasing professionalism in the cycling industry.

“I use the auto industry as benchmark,” Feenstra said. “I don’t use other bike shops as a benchmark. I use the car business. I look at that and go, ‘what’s the difference between someone selling a bicycle and selling a car? What’s the difference between someone repairing a bicycle and repairing a car? There’s nothing that except we in the bike industry devalue what we’re worth.”

The recent boom in bicycle sales also helped Feenstra with the decision.

“The employees have done a boatload of work under ridiculous amounts of stress and it only makes sense to pay properly,” he said. “The staff are more committed so they don’t have to move around. Now I will have employees who are invested in what’s going on. I’ll get more professional people and I can retain the very good employees.

But Feenstra said when homeless people were evicted from their shelters that was the catalyst to finally implement the policy.

“I have people I am paying who could be [in that situation],” Feenstra said. “You make one mistake in your life and you’re living on the street. There’s no savings, no nothing. I have a lot of staff like that. It came close to home three weeks ago when everything that happened in Halifax.”

As for research, Feenstra said he looked at the living wages calculated by the Canadian Centre for Policy Alternatives. As Zane Woodford reported in September 2020, the centre released a report that calcualtd living wage in Halifax increased to $21.80/hr from $19.30/hr. As Woodford reported then:

The living wage is calculated based on what two adults with two young children, both working full time, need to earn “to pay for necessities and provide a cushion above the poverty line,” although the authors note, “the research has shown that there are not significant differences in the hourly living wage rate needed to sufficiently meet the needs of a single adult or a lone parent with one child.” It also factors in deductions like taxes and transfers like child benefits.

Feenstra said the policy will cost the company a lot of money upfront, but said that is minimal to the costs of finding new staff and retraining them, He said his employees are the “lifeblood” of the business and that’s how they have to be treated.

“At some point when you’re an entrepreneur, you take risks,” he said. “This is a huge risk. This is a quarter-of-a-million-dollar risk that I’m taking. But it’s a very calculated risk and it has very varying results that can be completely attributed to [the living wage policy.] It’s the risk you take, but it will pay off in spades. You just have to do it. It’s the  right thing to do.”

“I’d like everyone in the city and the city to take a look at this, have a serious look, and maybe if they can’t go that high, just go higher than what they currently are because it’s good for everybody.”

Greg Smith opened Cyclesmith in 1986. Feenstra started working for the company in 1994. In 1999, Feenstra briefly left the business and returned to become one of the partners. He became the sole owner in 2016.