The US Department of Commerce has issued a preliminary ruling that the Port Hawkesbury Paper mill is being subsidized, reported the CBC yesterday morning:

The investigation sets the way to levy duties on supercalendered paper, glossy paper used for magazines and catalogues.

The ruling says the Port Hawkesbury plant’s exports to the U.S. are being subsidized at 20.3 per cent. That rate could be used to determine the level of duties.

By mid-morning, Premier Stephen McNeil was squawking about the injustices of the ruling and vowing to fight it.

Yea? You and what army?

Despite protestations to the contrary by Nova Scotians performing all sorts of verbal gymnastics, any rational observer will admit that the former NDP government’s $124 million bailout of the mill was a subsidy — news reports called it a subsidy at the time — and the ongoing discounted price for electricity for the mill is an ongoing subsidy.

It amazes me that Nova Scotian politicians thought they could subsidize mill operations and suffer no consequences for it. The subsidies resulted in the closure of a paper mill in Maine, and explain Governor Paul LePage’s refusal to come through with $5 million in financing he promised for the Yarmouth ferry. And of course American paper mill operators have filed unfair competition complaints, and so here we are.

Moira Donavan attended the panel discussion on environmental racism in Nova Scotia, and reports back.

Halifax Regional Police is investigating a vehicle/pedestrian collision that occurred this morning in Dartmouth.

At 10:34 a.m., police responded to a vehicle/pedestrian collision in the parking lot of Scotia Tire Service at 217 Wyse Road. A 70-year-old man walking in the parking lot at that location was struck by a vehicle driven by a 37-year-old man backing out of a service bay. The pedestrian was transported to hospital by EHS with what are believed to be non-life threatening injuries.

The investigation into this collision is ongoing and no charges have been laid.

Judy MacIsaac-Davis is the woman who was killed last year when she was struck by a pickup truck as she crossed the intersection of Thistle and Victoria Streets in Dartmouth in her motorized chair. I heard the collision and saw MacIsaac-Davis in her last moments.

MacIsaac-Davis’s family has sued the driver of the truck, and there is the inevitable and sad court wrangling. Lawyers do what they have to do, so I’m not going to criticize the blunt language used by the defence.

I do, however, want to call attention to this part of the article by the Chronicle Herald’s Sherri Borden Colley:

The defence goes on to say that MacIsaac-Davis attempted to cross the road on her motorized scooter while travelling at an excessive rate of speed; did not properly look for traffic on the road before attempting to cross; and failed to obey a traffic signal for pedestrians located at the intersection.

MacIsaac-Davis, who worked at the provincial Labour Department, had been a partial quadriplegic since she was six months old.

There are a lot of problems with this arrangement. It’s confusing; the green-light right-of-way is one thing in one situation and another thing in another situation. It’s an abrupt change to pedestrian expectations that have been in place for nearly a century. Moreover, at this intersection in particular, there are a lot of schoolchildren who may or may not understand the nuances of right-of-way law.

The buttons often don’t work at all when the temperature is below minus 20. And there’s the simple issue of whether it’s even possible for pedestrians to push the button. Though this past winter, the buttons were for many weeks surrounded by snowbanks and ice, making pushing them extremely dangerous, if not impossible. During the melt and in rainy weather, one corner in particular doesn’t drain properly, and pushing the button necessarily means getting soaked up to your shins and possibly completely, as passing cars spray water on the hapless pedestrian.

MacIsaac-Davis’s case brings up another issue. I don’t know what her exact physical limitations were, but the article suggests that she may not have been physically able to push the button. If so, what was she supposed to do? Stay home? Legally, she would’ve been required to sit on the corner forever, or at least until some passerby decided to help her out by pushing the button for her. This is of course degrading and insulting.

The buttons presume a lot of things. It’s time to do away with them, and give the default right-of-way back to pedestrians.

Yesterday, the city announced changes in the street closures at the construction site for the Cogswell/North Park/Ahern/Trollope/Rainnie roundabout, effective next Monday, August 3. Spokesperson Jennifer Stairs tells me that despite all the recent rain the project is still on-schedule to meet the projected August 24 completion date.

I’m a big fan of roundabouts, and especially this one, which will rationalize the most bizarrely complex intersection on the peninsula and make things much safer for pedestrians.

“The Cogswell/North Park/Ahern/Trollope/Rainnie roundabout” is a mouthful, and the city has sensibly taken to calling it the Cogswell Roundabout, while the one two blocks north is the Cunard Roundabout. Works for me.

But I’m disappointed that there’s no art in the Cunard Roundabout, and if any is planned for the Cogswell Roundabout, I’m not aware of it. Aren’t we supposed to be devoting one per cent of capital project costs to public art? And besides, roundabouts call out for art pieces in the middle of them.

I’ve taken the bus across the Spanish countryside a couple of times, and as the bus whipped around roundabouts at every major intersection, I’d keep my eyes peeled for the art. Sometimes it’d just be a statue of some boring dead guy, sometimes a historic allusion, sometimes a naturalistic piece, sometimes a po-mo thing. I noticed that special attention was given to the roundabout at the entrance to each town, creating a statement of what the town felt about itself.

The Cogswell Roundabout is the entranceway to the North End. It cries out for a special piece of art that announces what the North End is, what the residents think about the place. Done right, such a piece can be a defining element, creating a bit of community.

Speaking of the North End, Unfiltered Brewing has opened.

Tim Tanner, developer of the renovation project, said his workers were demolishing an original ceiling within the building Wednesday afternoon when something resembling a human skull fell down on them.

He said the object looked adult size. Workers also located an eagle’s head and snakes in jars in the attic.

His company immediately called the New Glasgow Regional Police Service to investigate. Tanner said there is access to the attic by a staircase.

Const. Ken MacDonald with New Glasgow Regional Police Services said police won’t say whether the object is a skull, but they are treating the discovery as possible human remains. The major crime unit and forensics unit are investigating.

Tanner is converting the former school into apartments. None of the news articles I’ve read say when the school was built or speculate about when the found material may have been placed in the attic.

There’s something spooky about the place. This video shows chimney swifts flying into the old school: 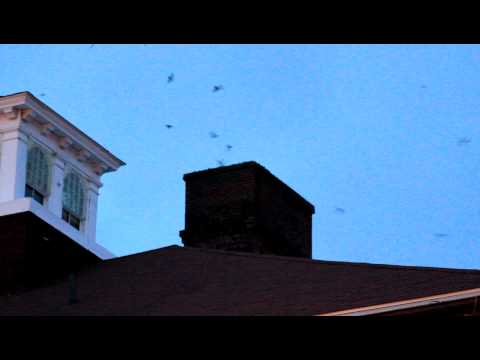 Yesterday on Twitter, Lewis Rendell put into words what many of us have been thinking:

I saw that tweet, nodded in agreement, and went on with my dreary day. Stephen Archibald saw it, and broke out his collection of suns. Most of them are upbeat, colourful affairs like this sun he found while bumming around Spain in 1971:

But my favourite from Archibald’s collection is a “sad-eyed sun” he found on a Yarmouth County gravestone:

To the Kings County News:

Not very long ago, our illustrious premier dictated to us taxpayers to prepare to be in for hard times and tighten your belts. Too bad the premier wouldn’t practice what he preaches. The old saying, ‘do as I say, and not as I do,’ has become nothing but a political joke with no laughter involved. The taxpayers of Nova Scotia have to tighten their belts, while the premier adds another overpaid and underworked minister to his cabinet.

The shuffling of some of his cabinet members, in my opinion, is to try and cover up the never-ending blunders made by these individuals while holding their previous positions as decision-making ministers. It is my belief that being appointed to a new post won’t improve their abilities to make any wiser decisions. In my opinion, stupid is as stupid was.

I see Younger came back to once again try his hand at making political mistakes again. I guess it is difficult to stay away from that rich lifestyle of being a well-paid politician with a never-ending expense account. I feel, as a tax-paying citizen of this great province, the people of Nova Scotia deserve better political representation than what we are getting. We need a good, honest government, but where do you go to find one that doesn’t lie, cheat, or tries to pull the wool over your eyes? Oh, by the way, I am living well below my means now, I don’t think I can go any lower.

At 6:30pm today at the new library, author Philip Slayton will be discussing his new book, “Mayors Gone Bad.” I was interviewed for and am quoted in the book.