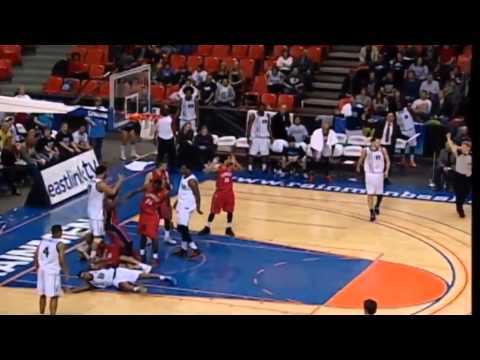 Vice reporter Nathaniel Janowitz details of the collapse of the Halifax Rainmen basketball franchise in a damning article headlined  “How a brawl and sleazy owner killed the Halifax Rainmen.” The “sleazy owner” was Andre Levingston, who Janowitz says had “a reputation for poor treatment of players,” paying low wages, and putting the players in substandard housing.

Janowitz then goes on to explain how the franchise has been resurrected:

After Levingston declared bankruptcy, rumours of a new franchise coming to Halifax began nearly immediately. At a press conference in late August, Don Mills — CEO of Corporate Research Associates Inc.—explained how a group of 25 shareholders would be bringing a new team to Halifax for the 2015-2016 season.

When Levingston declared bankruptcy, the advisory group took it upon themselves to bring a team back to Halifax. Mills announced at a press conference that the 25-person ownership group did not include Levingston, but that he would be hired as the GM of basketball operations—an announcement that angered many Rainmen fans who believed Levingston was to blame for much of the team’s failures.

In a conversation with Mills five days after the press conference, however, he admitted that a 26th shareholder had been added: Andre Levingston. This news had not been reported previously in the media even though Mark Lever, president and CEO of Halifax’s largest newspaper, the Chronicle Herald, is also a shareholder in the new team.

On this last point, this is not the first time that someone at Chronicle Herald with insider information about a controversial local business withheld that information from the paper’s readers. As I’ve reported, after he promoted Unique Solutions in the “Entrevestor” column that runs in the paper, Peter Moreira had inside knowledge  of the near-collapse of the company (he’s an investor with access to company financial information) but failed to tell his readers.

At 7:04 p.m., police responded to a vehicle/pedestrian collision that occurred at the intersection of Wyse and Boland Roads. A vehicle travelling southbound on Wyse Road turned left onto Boland Road and struck a man as he was crossing the street in a marked crosswalk. The man was transported to hospital for treatment of non-life threatening injuries.

The 31-year-old male driver was issued a summary offence ticket under Section 125(1)(a) of the Motor Vehicle Act for failing to yield to a pedestrian in a crosswalk.

Halifax Regional Police is currently at the scene of a bus/pedestrian collision in Clayton Park.

At approximately 11:40 a.m., a male pedestrian was walking in a marked crosswalk in the intersection of Radcliffe and Lacewood Drives when he was struck by a Halifax Transit bus. The pedestrian has been taken to hospital by EHS with non-life threatening injuries to his legs.

Traffic is currently being directed from Lacewood Drive onto Radcliffe Drive towards Bayers Lake Business Park as officers investigate.

This incident remains under investigation at this time.

The 51-year-old male driver was issued a summary offence ticket under Section 93(2)(h) of the Motor Vehicle Act for failing to yield to a pedestrian at a walk light.

The incident took place just after 7 p.m. at the crosswalk at the intersection of Beaverbank Road and Glendale Drive.

RCMP say a 27-year old male was crossing the road and had the right of way when a 26-year-old male made a left turn and hit him.

Police say the driver admitted he was distracted, and he did not have time to stop when he saw the pedestrian.

The man struck has minor injuries, but did not want to go to a hospital.

1. The year in politics

“The teachers’ vote [against the proposed wage contract] was, for my money, the top Nova Scotia political story of the year,” writes Graham Steele. “Instead of handing McNeil a victory at the negotiating table, the teachers forced him to spend more political capital by legislating the wage pattern.”

My friends and I have visted Cape Breton Highlands National Park on numerous occassions and the one thing we all enjoyed is the rugged coastline.

Now we hear there is a possibility of a statue being erected on the coast between Neil’s Harbour and Ingonish. If I’m right this is in the national park.

Do people realize the natural beauty you have? I can see a statue when I look out my kitchen window here in Calais, Maine.

I would give my right arm to be able to drive along the Cape Breton coast and see nothing but nature at its finest any time I wanted.

We live nine to 10 hours away and would drive and have driven many times to see the park, not to see a statue.

As the old saying goes: you don’t know what you have until its gone.

Please leave the park in its natural state.

On December 23, 1944, the German submarine U-806, torpedoed the HMCS Clayoquot at the mouth of Halifax Harbour, killing four officers and four sailors.

The torpedo struck without warning. HMCS Clayoquot was returning from an anti-submarine sweep in the approaches to Halifax harbour when its stern rose into the air, mangled by the detonation of a German T-5 acoustic homing torpedo. The men aboard felt two concussions, the second likely being depth charges stored on Clayoquot’s stern set off by the torpedo. Whatever the details, the explosions were devastating for the small Bangor class minesweeper. A grainy photograph of the doomed ship shows the stern blasted vertical, the ship listing to starboard. Clayoquot lasted barely ten minutes after being hit, just long enough for all but eight of her crew to escape. The worst fate befell two young officers trapped in the port forward cabin. These men called out through a port hole for axes to chop their way to freedom, but all the axes were underwater. The merciless sea closed around them as the ship vanished.

A German U-boat lying a few short miles off Canada’s coast claimed Clayoquot. Though the war was drawing to an end in late 1944, these dangerous predators still roamed the seas in significant numbers. The Canadian warship became another victim in a what was known as the U-boat’s inshore offensive. This had started modestly during the late summer and fall of 1944, and one of the U- boat’s operating areas was off Canada’s east coast. The renewed onslaught did not raise shipping losses to the levels experienced in the dark days of 1942, but the unexpected success ofU-boats after their crushing defeat in 1943 nonetheless caused concern. German submarines exercised their deadly craft with initially modest success in Canada’s coastal waters in late 1944.

The encounter between HMCS Clayoquot and U-806 well illustrates a typical naval engagement during this period of the shipping war. The action occurred in shallow waters, in daylight, and in a focal point where shipping had to pass. The approaches to the port of Halifax were seldom targeted by U-boats in the early part of the war, and even when the inshore offensive began U-boats generally steered clear of the RCN’s main base. This changed dramatically on 21 December, when a U-boat revealed its presence close off Halifax harbour by torpedoing and damaging the Liberty ship SS Samtucky. Although the Operational Intelligence Centre at NSHQ had correctly reported that several U-boats were operating in the Canadian coastal zone, none were considered to be off Halifax. Indeed, naval authorities initially believed that the damage to Samtucky came from a mine.

Once off the -port [U-806 Commander Klaus] Hornbostel spent over a week lurking, becoming familiar with the area before attempting to strike at a convoy entering the port. The numerous navigational aids found off Halifax, especially the anchored Sambro lightship, greatly assisted German submariners in getting their bearings, but the difficulty of operating submerged, restricted to slow speeds made their task formidably difficult. Despite patient preparation, U-806’s first effort achieved only marginal success…

The U-boat’s persistence and growing familiarity with the shipping routes in the Halifax approaches were finally rewarded two days later. On 24 December Hornbostel found himself well positioned to intercept the Boston bound convoy XB 139 as it left Halifax during the forenoon. A complex situation developed as this action began, which resulted in HMCS Clayoquot presenting, unintentionally, a threat which U-806 could not ignore. Two convoys were leaving Halifax at about the same time, XB 139 of 12 merchant ships, and HJF 36, consisting of the troop transport Lady Rodney escorted by the corvette HMCS Fennel and the minesweeper HMCS Burlington… The log of U-806 indicates that the U-boat never saw the troop transport, but sighted one of her escorts. Hornbostel spotted the long column of merchantmen in convoy XB-139 threading its way out of Halifax harbour, though, and proceeded northwest to intercept…

McLean went into great detail about the attack here. He continued:

U-806 also decided that discretion was in order with escorts apparently everywhere and, continuing on its course to the northwest, came to rest on the bottom in 68 metres of water in the vicinity of Buoy 1.29

While Hornbostel and his crew crossed their fingers, the men of Clayoquot did their best to survive the harsh Atlantic. Two clear thinking seaman used axes to chop the falls of Clayoquot’s whaler, allowing its use. All of the ship’s carley floats were also released. In addition, most of the crew were able to don lifejackets during the brief minutes before Clayoquot took her final plunge. The result was that, except for those unfortunate few trapped or killed in the initial explosions, everyone was able to scramble into the cold water. HMCS Fennel, appreciating that men exposed to the frigid waters could not last long, rushed to pick up survivors. Launching her own whaler, she was able to pick up 3 officers and 72 sailors in short order. This episode was the high point of the day, and demonstrated a good standard ofseamanship. The result was that the death toll was kept to eight men, when the cold waters might well have been expected to claim more.

Tomorrow, Christmas Day, the Examiner is drinking eggnog and such. El Jones is taking this Saturday, Boxing Day, off but will return on Saturday, January 2 as usual. Next week I will write Morning File as usual, but will have three guest writers for the rest of the week: Erica Butler on Tuesday, followed by Natalie Chavarie on Wednesday, and Russell Gragg on Thursday with the last Morning File of the year.