You are here: Home / Featured / Yarmouth ferry may not sail this year 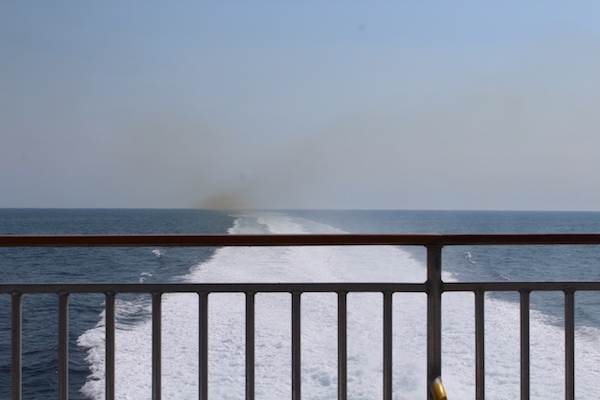 Nova Scotia Business Minister Geoff MacLellan admitted under questioning from reporters following a Cabinet meeting Thursday that the province has no idea if or when the Yarmouth ferry will operate this summer.

“Certainly we are worried about this season and our tourism operators,” said Minister MacLellan. “All we can say is we have done everything we can. This is something that is out of our hands at this point.”

Bay Ferries is the operator of the seasonal service whose U.S. terminus was to move from Portland to Bar Harbor, Maine after renovations were complete on the ferry terminal in Bar Harbor. The decision to move to Bar Harbor was made last October after the town received permission to buy the terminal property. However, the bulk of those $8.5 million renovations (paid for by N.S. taxpayers) cannot begin until the U.S. Customs Border Protection service approves the layout and design of the changes, a process that can take up to a year.

MacLellan says the green light “could come at any time” but meanwhile Bay Ferries has not been given a specific date and there is still “a runway of work to do” before the ferry can sail. MacLellan says the province does not understand what information (if any) the Border Protection Service needs to approve the changes.

That is the reason taxpayers are now shelling out US$10,000 a month to David Wilkins, the United States’ former ambassador to Canada. Wilkins has been hired by the province to sort out the mess and find out what Customs Border Protection requires to let the renovations proceed. Wilkins was hired on or about June 7 when Bay Ferries announced the start of season would be delayed until at least June 21. Now it looks as if there may not be a season but the minister responsible was careful not to point any fingers or burn any bridges with the Big Guy to the south.

“There is no one on any side suggesting this is being done intentionally or that it is unnecessary work,” said MacLellan referring to the due diligence Customs Border Protection is doing before approving construction on the terminal. “This is Homeland Security; it’s a big thing. The government shutdown (in January due to Trump’s refusal to sign a bill) just added days to the clock. It wasn’t the reason.”

Previous to MacLellan making himself available, Premier Stephen MacNeil had said he was “hopeful” there would still be a ferry this summer. McNeil had suggested the shutdown of the American bureaucracy in January may have played a part in the delay of the summer season.

Reporters were anxious to know how much of this year’s $22.3 million budget for the  Yarmouth ferry will be spent if the boat doesn’t float. MacLellan wasn’t immediately able to say. He noted there are certain “fixed costs” as part of the contract. We know $8.5 million will be spent in Bar Harbor for the terminal renovations. The remaining $13.8 million operating subsidy for 2019 includes money for fuel, salaries, insurance, and an undisclosed management fee that is the subject of a Freedom of Information court case initiated by Progressive Conservative leader Tim Houston. A news release issued by PC leader Tim Houston reads:

The contract between the Liberal government and the ferry operator says there is no breach of the contract if the ferry service is interrupted on account of “weather and sea conditions, or technical or mechanical issues.” It’s not clear if failure to secure a port of entry would constitute a breach or not. Minister Hines must tell Nova Scotians today if taxpayers are on the hook for a ferry that goes nowhere this summer.

MacLellan told reporters the province intends to pay Bay Ferries the agreed upon management fee. “The subsidy rates are tied to passenger numbers as well as the performance targets,” explained MacLellan. (The subsidy should be lower if the ferry doesn’t operate.) “But there is still a file to be managed here. Bay Ferries isn’t sitting dormant waiting for U.S. Customs Border Protection. The complexities around moving a service from Portland to Bar Harbor are extensive. The company has been doing work around the Yarmouth ferry nonstop. They are still performing in terms of managing this service and because the boat is not in the water at this point, I don’t think it signals that they haven’t been doing any work.”

Maybe not. Maybe the ferry should have sailed out of Portland one more year. Maybe the McNeil government shouldn’t have signed a 10-year contract for a service that costs taxpayers about $1,150 per passenger. Maybe there should have been more public disclosure sooner so tourism operators across the province wouldn’t be scrambling on the first day of summer.