You are here: Home / City Hall / Why isn’t the province buying transit passes for our poorest residents? 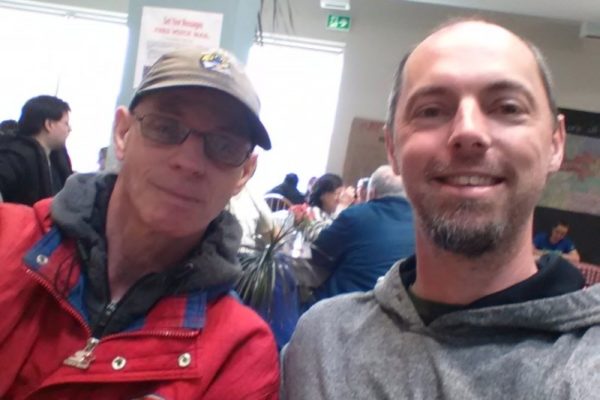 Terry Wilson and Matt Spurway, as pictured in an online fundraising campaign for transit passes.

Last week, in about 24 hours, Matt Spurway raised enough money to buy a year’s worth of bus passes for his friend Terry. The Go Fund Me campaign pitch outlined Terry’s situation:

At some point this year, 500 people with low incomes may have improved access to transit as part of a pilot project testing out a low-income transit pass, an idea first put on the table back in 2013 by Councillor Jennifer Watts.

In the coming weeks, city councillors are expected to see a transit fare bylaw come across their desks, which will at last make way for the pilot project.

It’s something that Matt Spurway has been waiting for. When Spurway ran in a January byelection to fill a vacant seat in Harbourview-Burnside-Dartmouth East, he campaigned on affordable transit.

“It seems transit has always been focussed on the 9-5 commuter and trying to convince them to leave the car in the driveway, and doesn’t give much consideration to the people for whom transit is their only option,” says Spurway. “The health of our citizenry, social engagement, access to employment, to training, to volunteerism — getting out and about is incredibly healthy for individuals and communities.”

According to a March 26, 2014 report to council’s Committee of the Whole, the low-income transit pilot project would give 500 HRM residents whose household income is less than $31,000 (according to their federal Notice of Assessment) a letter allowing them to buy half-price transit passes for six months.

One of the main problems with the pilot is that it excludes the poorest among us. If I am receiving income assistance in Nova Scotia and qualify for their transportation allowance (usually about $78, the price of a monthly bus pass), I won’t be able to purchase the city’s low income transit pass. The reason? Fear of jurisdictional creep.

“If HRM establishes a permanent low income transit pass program that recipients of ESIA are eligible for, the Department of Community Services would have the ability to dramatically reduce the funding they provide to residents for transit passes… This would shift the responsibility of providing a social assistance benefit from the Province to the Municipality,” states the staff report.

In January 2014, DCS allotted at least $500,000 in transportation allowances for about half of its Halifax clients. (The half that successfully jumped through the right hoops in order to get the allowance.) But what if DCS could have spent half of that funding in a bulk purchase of transit passes that could serve twice as many Halifax clients?  What if we put an end to the arduous qualifying process for access to transit, and replaced it with automatic access to transit?

We are already doing bulk purchases with universities. Almost all post-secondary students in Halifax buy their transit in bulk. And because they pay up front for eight months of transit, they get an amazing rate: about $18.75 per month, per student. At this same rate, DCS could buy all 13,000 of its clients annual bus passes, and still have roughly half of its transportation funding available for clients with other transportation needs, beyond transit.

All it would take, of course, is for two levels of elected governments and their staff to sit down and hammer out a deal.

“There’s a huge missed opportunity right now,” says Spurway. “The municipality and the provincial government should be getting together and sitting down and working something out. There’s no need to be charging someone like Terry $78 a month.”

Of course, switching bus pass funding from a cash allowance in the amount of a monthly transit pass to an actual monthly transit pass does have the undesirable side effect of robbing people of control over their personal budget. Under the current system of transportation allowances, some might choose to buy a transit pass, but others may choose to spend the money on bus tickets, gas, taxi fares, or even supplements for paltry food and shelter budgets.

Based on current figures, and if a deal similar to U-Pass could be reached with Halifax Transit, we know that DCS would be able to offer all of its HRM clients an annual pass while still supplementing their transportation allowance with additional cash. It’s just a matter of having them commit to doing so.

“I think the two [levels of government] need to sit down, at a leadership level, not at a staff level, and say this is clearly something that has to happen and surely to goodness we can come up with a system that works well for both parties,” says Matt Spurway. “If transit can actually increase revenue and ridership, and the city benefits from our citizens getting around more, being more employed, and community services benefits because their clients are that much healthier or better fed or finding employment, then maybe they both take a cut off the top of what they were hoping to spend or save and see how it works out.”

Here’s hoping our elected officials will wake up soon and smell the win-win situation.