You are here: Home / City Hall / Where do Nova Scotia’s political parties stand on proposed changes to the Otter Lake dump? 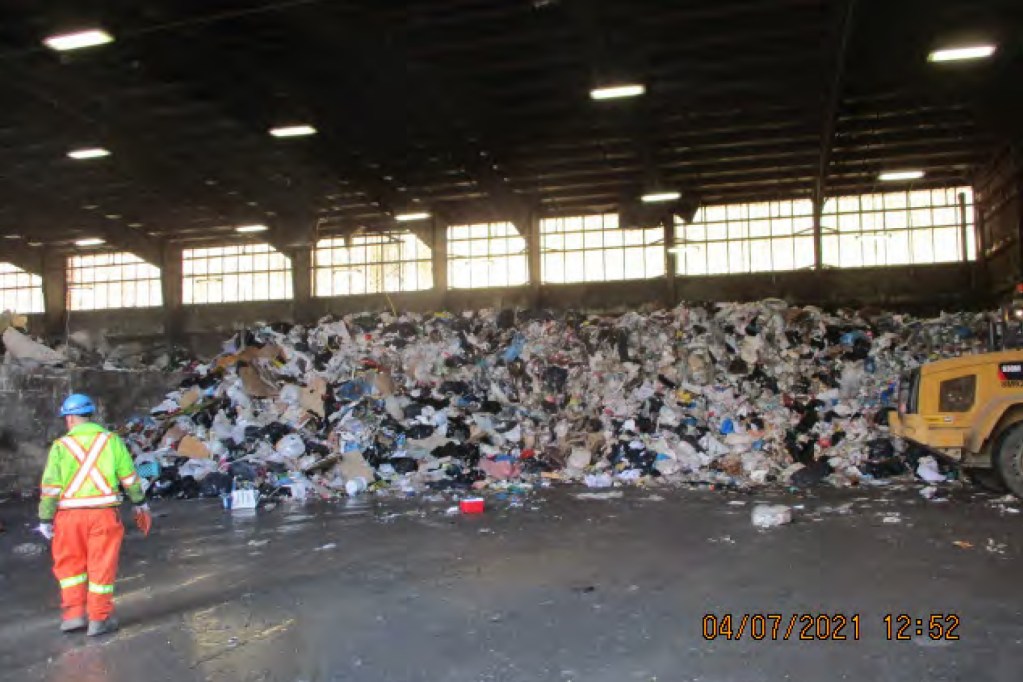 Garbage on the tipping room floor in the front end processor at Otter Lake in a photo in a slide deck included in a staff report to council. — Photo: HRM

The Liberals say they wouldn’t approve proposed changes to the city dump, while the other parties are vowing to implement new environmental assessment processes and consult the community.

Last week, Halifax regional council voted to apply to the provincial government to deactivate the Front End Processor (FEP) and Waste Stabilization Facility (WSF) at its Otter Lake landfill. As the Halifax Examiner reported earlier this month, it’s a controversial change that the municipality has been trying to make for years.

When garbage trucks pull up to Otter Lake, they dump their loads onto the floor of the FEP. The waste then goes through stages of sorting. First, big bulky items, recyclables, and things like gas cylinders and batteries are sorted out, and then the larger material goes directly to the landfill and smaller material goes to the WSF for stabilization. In the WSF, the smaller waste is aerated and turned for 15 days, and then sent out to the landfill as low-grade compost.

The process came from the 1995 Integrated Waste/Resource Management Strategy, adopted by the municipalities that later became HRM — Halifax, Dartmouth, Bedford, and Halifax County. That strategy was focused on composting, and led to HRM’s green cart program in 1999 — one of the first in North America. It also set the parameters for a new landfill in response to the community concerns from the last dump, along Highway 101 in Sackville.

In a report to council last [month], Andrew Philopoulos, HRM’s director of solid waste resources, made the case for shutting down the FEP and WSF. Philopoulos cited a report by Dillon Consulting, which analyzed the use of the FEP and WSF in 2018, and then updated its report in 2020

“Based on the results of this analysis, there does not appear to be any significant benefit to the continued operations of the FEP/WSF,” the Dillon report concluded.

“Further, there does not appear to be any increased risk to public health and the environment if the FEP/WSF operations are terminated. Therefore, it is recommended that operations at the FEP and WSF be discontinued.”

While a string of consultants and the municipality’s solid waste staff say it would make little to no difference, the local community monitoring committee remains opposed to the idea.

Council voted in favour of the plan to apply, in concert with its contractor Mirror Nova Scotia, to the provincial Department of Environment and Climate Change to deactivate the facilities. Councillors Iona Stoddard, David Hendsbee, and Trish Purdy voted no.

Halifax has yet to actually file the application, according to municipal spokesperson Klara Needler.

Tracy Barron, a spokesperson with the Department of Environment and Climate Change, said a regional administrator will have 60 days to make a decision once the application is submitted and deemed complete.

How would each party handle the proposal?

Liberal leader Iain Rankin’s father, former councillor Reg Rankin, is the executive director of the Community Monitoring Committee, and the dump is in Rankin’s riding, so it’s perhaps not surprising that the party gave the most direct answer to the question.

“A re-elected Liberal government would stand by commitments made to Timberlea-Prospect and surrounding areas,” the party said in a statement attributed to Rankin.

“We will not approve any changes that relax environmental standards at the Otter Lake Landfill.”

Rankin also brought forward a private members bill in 2016 titled, “An Act to Maintain the Current Footprint and Certain Requirements of the Otter Lake Landfill.”

The NDP took a broader approach to the question, vowing to create a new process for these kinds of decisions, and ensuring consultation:

The NDP would create an environmental bill of rights to ensure that community voices are at the centre of decisions that impact the environment. The community has indicated that it is opposed to changes to the dump’s operation and an NDP government would work to make sure the community is heard in any decision to do with the dump’s future.

The Progressive Conservatives made no commitments specific to Otter Lake:

We have seen some of the most polarizing debates in our communities, pitting neighbour against neighbour, in the argument of economy versus the environment.

One reason for this polarization is because people are afraid that the government won’t properly assess the projects that come before it with the environmental rigour they feel is needed.

Our communities need confidence the Minister of Environment will show that government is serious about doing its job in protecting Nova Scotians, and will properly, thoroughly and fairly scrutinize and assess any projects that come before it.

As a result, a PC government will establish blue ribbon panels of subject matter experts to assess complex applications to ensure our environment is protected with the highest level of scrutiny for complex projects.

A PC government will also update its environmental impact assessment process to consider the cumulative impacts of any development that would potentially affect wetlands, rivers, lakes or other aquatic environments.

The Green Party’s statement addressed Otter Lake specifically, and argued in favour of more consultation before any changes:

This is a complicated situation with many factors to consider. There are reports of environmental racism, and speculation that if the front end processes are not stopped at Otter Lake Dump that the operating company will raise dumping fees drastically. The report justifying the process changes states that organic waste is “down to 44,000 tonnes” but that is still a significant amount of odorous organic waste for the local community to deal with the ramifications of. As the local council stated a need for more time, so too would the Green Party of Nova Scotia require more time and consultation to be sure the most vulnerable parties involved are protected, and the benefits to this change are tangible and not just financial.