You are here: Home / City Hall / When a “climate emergency” means more roads

On Friday, school kids will walk out of their classes and head out for another march around Halifax, visiting the various levels of government along the way, pleading for someone, anyone in a position of power to take seriously the realities of climate change. 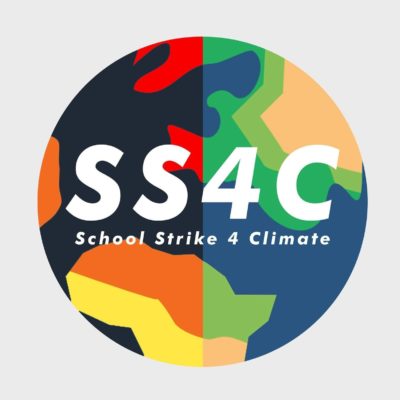 Their timing is great.

Sometime this coming month, Halifax City Council will discuss the 10-year capital plan for the municipality. After the frustrating back and forth over transit and active transportation funding in recent budget discussions, this will be councillors’ first chance to tell Halifax senior staff clearly what their priorities are (by which I mean, of course, what our priorities are, since councillors are there representing us). Let’s hope councillors will be taking a cue from Friday’s marchers.

About one-quarter of Canada’s emissions, according to Environment Canada, are from the transportation sector. In the municipal region of Halifax, about 77% of the trips we take are in private vehicles, the least GHG-efficient mode of urban transport. Even worse, that number has been trending upward in the past decade, despite the declared intention in our Regional Plan that it do just the opposite. Accept it or not, Haligonians are, with each fossil-fuel powered trip, filling the atmosphere with more CO2, and further changing the climate. 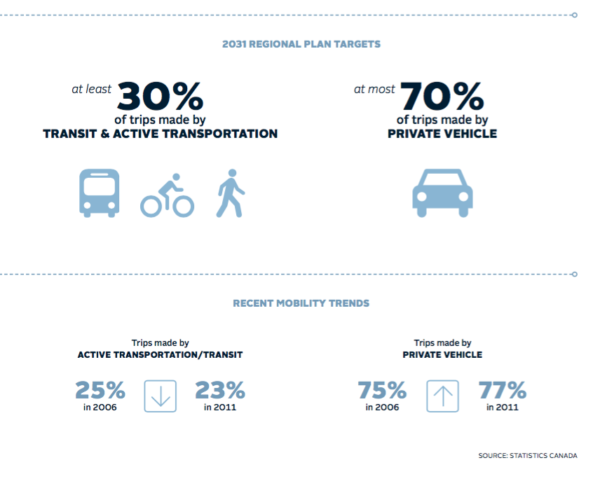 2031 targets mode share targets from HRM’s Regional Plan, also adopted by the Integrated Mobility Plan, and our recent trends in mode share, based on work trips.

That is a sorry state of affairs, but the good news is, we have a plan to help turn it around. The city spent over a year working on it, bringing in a consultant who worked with at least 21 city staffers on the project. In December 2017, HRM council unanimously passed the Integrated Mobility Plan, an outline of actions to take over the next 15 years that would help us turn our transportation system around, from one growing our fossil fuel use, to one actively reducing it, simply by giving us better options to get around.

It’s not a radical plan, by international standards. And it’s not perfect, either. But it could help us stop digging the GHG hole we are digging, and start to grow a city that can survive the transition to a post-carbon world.

The authors of the Integrated Mobility Plan (IMP) estimated that it might cost $190 million in capital costs to fund the plan. Since day one, this number has been tossed around as if it’s the obstacle that will prevent us from succeeding in transforming the transportation patterns of the city.

He’s not the only city councillor to take this attitude, but councillor Bill Karsten perfectly distilled the mindset when he commented at council, “we could pave the streets with gold, too” in reference to efforts to improve standards of winter sidewalk clearing.

We are all susceptible to it, this psychological trick that we play on ourselves with money.

Here’s a personal example: When I spend $20 on food at my local food co-op, The Grainery, I walk out thinking, “whoa, I just spent a lot at the Grainery.” When I spend the same money on food at Sobey’s, I walk out thinking, “phew, I got away with only spending $20 at Sobey’s.” My spending history at these two stores is very different, so much so that spending the same amount in each on roughly the same thing (food) feels radically different.

I’m suggesting we are playing this same trick on ourselves when it comes to spending our collective money on transportation: $190 million sounds like a lot simply because it’s being spent somewhere we are not accustomed to spending vast amounts of money — on buses and active transportation. Were $190 million the suggested price tag for a number of other, more historically typical transportation projects, we would not have sticker-shock, but rather simply resign ourselves to paying.

Don’t believe me? Here’s a little test. Was there ever an ounce of doubt that we, as a society, would be able to afford the Macdonald Bridge redecking project?  That thing cost us $207 million dollars! It was astronomical, especially when you consider it is essentially a single roadway connection, and one that still prioritizes private vehicle trips. The IMP, by comparison, will deliver a network of transit prioritized streets, and a protected bike network, albeit a minimum one. The IMP costs less, delivers more, and will help us stop digging deeper into the climate-altering, GHG-infused hole we are in.

(I should acknowledge here that the bridges are our only 100% user-funded piece of infrastructure. However, the upfront money was loaned at a low interest rate by the province, so in the short term at least, we are all paying.) 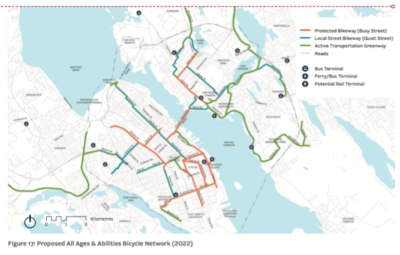 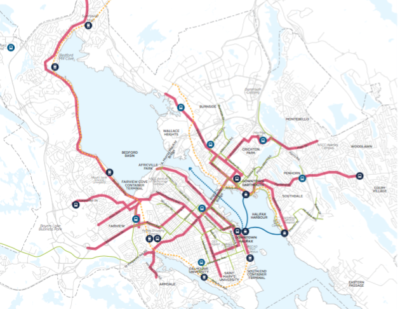 The IMP-proposed transit priority network (above) and all-ages and abilities bike network (below).

Then there’s the Burnside Connector. The provincial government has announced $110 million towards building a new, nine-kilometre long, twinned highway connecting Burnside to Sackville. The federal government has announced $86.5 million towards the project. That’s a combined $196.5 million of public money paying for a single nine-kilometre connection — that is, about the same cost as the entire Integrated Mobility Plan.

Has there been an outcry over this cost of the Burnside Connector? No. There have been debates about the road, sure. Like, will this be the time that we finally learn about induced demand? (Probably not, alas.) But the one thing you don’t hear on either side of the debate is a voice saying, “Come on guys, this would be great, but, we just can’t afford it.” (Or, sarcastic Karsten-style, “sure, and we can pave our streets in gold, too.”)

That sort of talk is reserved for transit and active transportation, not highways or bridges. Both are designed to get people from A to B, but each has a very different spending history. And it shows.

Here’s hoping that hundreds of high school students walking out of their classes, repeatedly, will help give us the collective head shake that we need here. We can afford to implement this action plan. What we can’t afford is not implementing it.

The investments in the IMP will save us money in the long run. It’s estimated that by changing course in transportation and development patterns, we can avert about $300 million in net costs over the next 20 years. And that does not include the impacts of carbon taxes or other market-correction schemes, or the costs of whatever impacts can be averted by mitigating climate change.

Sure, but we still need $190 million to invest before we recoup the investment. Ideally, this should be cost-shared among the various levels of government, but this is the city’s plan, and the city has to take the lead here.

Right now, even if the federal and provincial governments came through with $85 million apiece, city staff would more than likely issue a report saying, that’s great, but we still won’t be able to get this stuff done, because we don’t have the capacity. It so happens that is exactly what they said when council voted to include IMP projects in this year’s capital budget. I’m not sure whether to call that bad planning or planning to fail, but either way, it’s not okay.

As has been demonstrated in this year’s budget discussions, capital money is not really the problem. Not only can both citizens and council exert political pressure to have other levels of government contribute, but there are already funding mechanisms that could be financing this transformation which are not. HRM currently gets about $25 million a year in gas tax transfers from the federal government via the province. In March, the federal government announced a one-time doubling of the transfer. If HRM council decided to fund the IMP from the gas tax fund, the $190 million plan would be paid for in less than seven years.

And of course, in the short term, HRM can borrow to cover these investments. Despite its steady source of income, even the Bridge Commission borrowed to repair the Macdonald Bridge. The city has options for low interest borrowing through the provincially-run Municipal Finance Corporation, and the federal government is happy to let us borrow against future gas tax transfers.

The IMP should be cost-shared, definitely. But the city should commit to borrowing the funds to pay for the IMP no matter what. In order to prepare to actually do this, to make sure we have the capacity that we currently don’t, we need a long-term commitment. We need something more than a promise that the federal government might come through in some future budget year with, say, as much as they are pledging to help build the Burnside Connector.

It’s great that the climate strikers will be marching to and stopping at Andy Fillmore’s office on Friday. As an urban planner, he knows better than anyone what it takes to transform the transportation sector, and I sincerely hope he can convince his party to continue to provide funding for municipalities to transform themselves, and maybe even divert some of the money they have committed to growing fossil fuel use.

It’s also great that the climate strikers will stop at Province House, where the government continues to spend hundreds of millions of dollars growing our twinned highway network, and a mere pittance on public transit ($5.8 million in 2018-19.)

But it’s also very important that they will visit City Hall, because more than anyone, city politicians are ready for this. They just unanimously declared a climate emergency in Halifax. They have a unanimously-approved transportation transformation plan, and the potential means to execute it. This month, as they come up with their plan for the next 10 years of big ticket spending in the municipality, they will decide if they can resign themselves to actually implementing it.

The IMP may be “radical” by HRM standards, but it’s not radical. The ideas in this plan are tried and tested in cities around the world. They include bus lanes, bike lanes, bump outs and protections to make walking safer and more comfortable. This is — excuse the vernacular — some basic shit. And if the collective willpower of council, and the collective brain power of our senior city staff, cannot make this happen, then we are sorely deficient in one or the other.