You are here: Home / Commentary / What the Mounties don’t want you to know? Everything 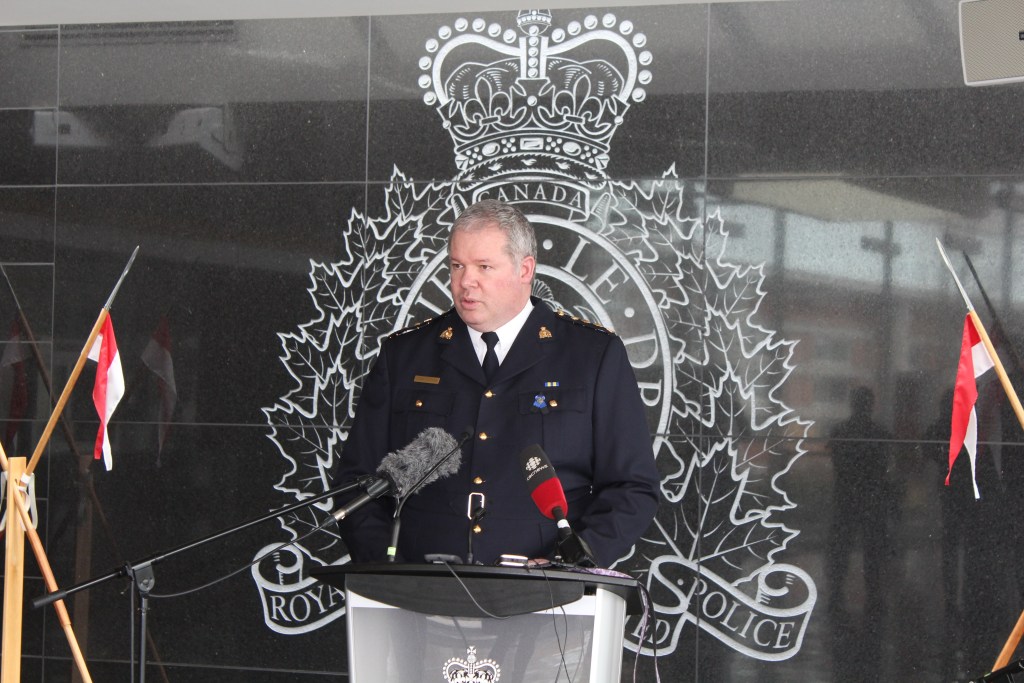 [Canadian Press:] Canadians would very much like to know how many people have died?

[Chief Superintendent Supt. Chris Leather:] I can tell you that in excess of 10 people have been killed, but the investigation is still ongoing, and I expect to have more details in that regard in the coming days.

[Canadian Press:] Thank you very much, and can you please explain what you mean by “in excess of”?

[C/Supt. Leather:] I’m afraid at this time I can’t expand on that any further.

[Canadian Press:] You mean that you don’t know?

[C/Supt. Leather:] Correct. We don’t have a complete, uh… we’re not fully aware of what that total may be because, as we’re standing, here the investigation continues into areas that we’ve not yet explored across the province.

That wasn’t completely true, of course.

So, by the time of that press briefing, the RCMP already knew that “at least” 17 people had been killed in a horrific mass shooting.

Mass Casualty Commissioner Investigator Krista SMITH: How did you decide on 10?

RCMP Director of H-Division Strategic Communications Unit Lia SCANLAN: Well, because at a certain point you have to call your information final … because we do have to [have] it translated, and we send it to translation. And we have to prepare [RCMP Superintendent] Darren [Campbell] for remarks. So, in those early days, the body count would change, and you just have to land on a number go to with for the press conference, knowing you’re going to be providing an update the next day. So that’s why 10 was decided upon. [My emphasis]

It isn’t rocket science. A few keystrokes, a soupçon of Google Translate and you’ve got it. Seventeen in English becomes dix-sept in French, complete with handy dandy pronouncer.

Unfortunately, the RCMP’s congenital inability to be transparent about even how many people it already knew were dead that day was just one among its far too many sins of omission and commission in the aftermath of Canada’s worst mass shooting.

You may recall that that infamous press briefing began with a statement by Lee Bergerman, the RCMP’s commanding officer in Nova Scotia, that was beyond tone-deaf.

For two minutes and 40 seconds, she spoke only about the loss of Cst. Heidi Stevenson, “one of our own,” and the non-life-threatening injuries suffered by another of their own. Only then — with all of Canada watching and waiting — did she think to mention: “This tragic incident has also resulted in many victims outside of the RCMP.”

She was followed at the podium by Leather who began his own statement with another tribute to the fallen officer. It took a Canadian Press reporter to finally ask Leather the question the country was asking.

And to be consciously deceived by him.

Meanwhile, national RCMP Commissioner Brenda Lucki, adopted a different tack. That evening, she granted interviews to various media outlets and told reporters what she knew at the moment — based on what she’d learned from the Mounties in Nova Scotia.

At 11:00 p.m., the Nova Scotia RCMP’s investigative decision log stated: “Based on the information gathered from the scenes we believe that there are potentially 23 people deceased including the suspect and Cst. Stevenson. [But] the Nova Scotia RCMP did not share an updated victim number with the public until the next press briefing, at 2:00 p.m. on April 20, at which time they said there were “in excess of 19 victims.”

Rather than welcoming the commissioner’s ongoing updates, RCMP Nova Scotia communications staff seemed beside themselves with frustration that someone would betray their silence-is-golden strategy by releasing the facts as they were actually known.

At 9:27pm, Jolene Bradley, the director of strategic communications at RCMP national headquarters, sent an email to Scanlan commiserating about their boss’s unhelpful honesty. “Doesn’t help you the Commr keeps giving the number!!!!” she wrote. “Am really trying to get that back in the box for you.”

Scanlan replied with thanks. “I’ve had to ask my entire team to turn their phones off as a result.”

Turn their phones off?! Her communications team? In the immediate aftermath of a terrible mass shooting?

Less than an hour later, Scanlan wrote a frustrated email to other national communications staff:

Can I make a request that we stop changing numbers on victims? Please allow us to lead the release of information. It looks fragmented and inconsistent. The release of 10 was decided upon for good reason… We knew at the time of the press event that it was more than 10 but that is what we came to ground on for the event.

Don’t forget that that “good reason” seems to mostly have had to do with the need for translation.

And, of course, control.

In its 130-page June 13 “foundational document” on the RCMP’s public communications, the Mass Casualty Commission dissected and eviscerated many of the other “good reasons” Mounties offered up for their misstatements and unwillingness to make statements.

Just to give you a flavour of all that officials weren’t saying: By the second-day briefing, Leather already knew one of the victims, Emily Tuck, was a teenager and that available next of kin had been notified. Still, he told reporters that all the victims were “adults.” When another Mountie emailed to ask if Leather was aware of Tuck’s age, Sgt. Laura Seeley from the major crime unit emailed back:

C/Supt. Leather is aware of all the victims and ages. He released what he felt comfortable confirming at the time. Thanks for following up though.

Even before the Mass Casualty Commission released this most recent foundational document, it had acknowledged it was investigating another of Leather’s communications command decisions.

In a May 17 foundational document, reported on by my colleague, Jennifer Henderson, the commission said “investigation is ongoing into the role of Chief Supt. Chris Leather, as H-Division Criminal Operations officer, in relation to the release of information about the replica police cruiser.”

Interestingly, on June 2, just a few weeks after that news became public, the province’s Lieutenant Governor, Arthur LeBlanc, announced the names of the first 70 provincial recipients of the Queen’s Platinum Jubilee Medal “honouring significant contributions and achievements made by residents.”

And so it goes.

What has been particularly intriguing to me about the media and political response to the commission’s latest foundational document is just how much attention was focused on one aspect of it: what the Mounties said — and didn’t say — about the killer’s weapons. And why.

During an April 28th press briefing, Supt. Darren Campbell repeatedly deflected questions concerning specifics about the weapons the killer had in his possession. That information, he told one reporter, is “part of the active and ongoing investigation and it’s a piece that right now, unfortunately, I can’t share with you.”

That same day, senior Halifax Mounties Campbell, Leather, Bergerman and Scanlan had a conference call with Commissioner Lucki and members of the national communications team.

According to Supt. Campbell’s notes, Commr. Lucki stated that “she had promised the Minister of Public Safety and the Prime Minister’s Office that the RCMP, (we) would release this information.” Supt. Campbell’s notes indicate that when he attempted to explain the reasoning for not releasing this information, Commr. Lucki stated that “we [the Nova Scotia RCMP] didn’t understand, that this was tied to pending gun control legislation that would make officers and public safer by or through this legislation.”

Was Lucki was responding to undue political pressure from Prime Minister Trudeau and Public Safety Minister Bill Blair to provide them with confidential information about the killer’s weapons simply to support their proposed gun control legislation? That’s a legitimate question. It dominated Question Period in the House of Commons last week. And it deserves follow-up. As does the Mass Casualty Commission’s demand to know “to know why the federal government withheld information alleging that RCMP Commissioner Brenda Lucki acted on political direction to interfere in the criminal investigation.”

But it’s just one of many questions and, in many ways, far from the most interesting. Especially given that boots-on-the-ground Mounties like Campbell continued to ignore her instructions and those of her political masters, if indeed they were instructions. (The details about the weapons didn’t finally surface until November 2020, seven months after the murders, when the National Post got a copy of a briefing report prepared for Trudeau that it had obtained through access for information.)

So, let’s ask some of those other questions not being asked in Ottawa:

As Michael MacDonald, one of the Canadian Press team covering the mass casualty inquiry, noted in an excellent follow-up report on June 23: “Lost in the partisan bickering was any discussion over the public’s right to know about the firearms in question.”

MacDonald interviewed A.J. Somerset, the author of a 2015 book on the gun culture:

When the shooter is identified, then anybody who had any information about how those guns were obtained would immediately want to avoid talking to police. I don’t see how the identification of the weapons actually leads to that person becoming aware of something they weren’t already aware of.

MacDonald also interviewed Blake Brown, a Saint Mary’s University history professor and author of Arming and Disarming: A History of Gun Control in Canada, who made the point that Canadian police have actually stopped sharing information that previously was routinely made public. When a man murdered 14 women at Montreal’s Ecole Polytechnique on December 6, 1989, for example, the public was quickly informed the weapon he used was a Ruger Mini-14 (which also happened to be one of the weapons of choice for Nova Scotia’s mass killer, and one of two weapons that the Nova Scotia killer used, which later became subject to the new gun control legislation). Noted Brown:

At some point, police stopped [sharing that information]. I don’t understand why that information can’t be released faster by police. One of the themes of the Mass Casualty Commission has been highlighting the tendency of the RCMP to hand out very little information and to treat the public like they don’t need to know much.

Treating the public like they don’t need to know much… Or anything at all.