According to folklore (and Wikipedia) a werewolf is a human with the ability to shapeshift into a wolf-like creature after being placed under a curse or affliction. So “Werewolf” is the fitting title for Cape Breton director Ashley McKenzie’s much-acclaimed and gritty feature film about two young adults struggling to stay on methadone and break from their drug addiction. Blaise and Vanessa attempt to support themselves in a rural area going door-to-door offering to mow lawns with a machine as broken down as they are.

Check out the free public screening and discussion this Monday night at the Central Library in Halifax (6:30-9 pm) to find out whether the couple makes it and to learn more about addiction.

Werewolf — which has drawn stellar reviews from the New York Times and the Toronto International Film Festival — is the opening act for a timely panel discussion around opioid abuse and harm reduction.

In Nova Scotia, the number of overdose deaths each year from opioids (painkillers) such as morphine, dilaudid, and methadone has hovered steadily around 60 each year. Sad as those numbers are, the number of Nova Scotian fatalities has not spiked the way numbers have in western Canada and Ontario. There were 62 confirmed opioid deaths in Nova Scotia last year, and three other deaths that are suspected to be related to opioids.

Until 2016, Dr. Strang says most overdoses resulted from using prescribed painkillers in combination with alcohol, or street drugs like crack and heroin, or benzodiazepines. He says that over the last 18 months, that profile has started to change. At least half a dozen overdoses have been attributed to the emergence of fentanyl, a synthetic illegal opioid that Strang says is “even more concerning because it moves the issue beyond people knowingly taking opioids in a risky manner to anybody using street drugs who can potentially overdose and die.”

Fentanyl (a tasteless, odourless powder 50-100 times more potent than morphine) killed four Nova Scotians in 2016 and another two or three last year (the cause in one death is unconfirmed).

Fentanyl is a man-made opioid that was the subject of an investigative article in Mother Jones magazine about the sleazy tactics employed by one American manufacturer to market it for general consumption when the drug had been approved only for the most extreme cancer pain. 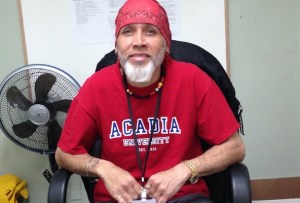 The nasty thing about this drug, says Chris Clayton, a peer support worker at the Mainline Needle Exchange, is that any recreational drug user is vulnerable. Just a couple of salt-sized grains of fentanyl slipped into cocaine or ecstasy or even weed (yes, weed according to Clayton, although Dr. Strang believes that’s an urban myth) can kill you. And there is no label or sniff test to act as a warning.

Clayton, a recovered drug addict, was hired in November as part of a federal-provincial “harm reduction” strategy to prevent fentanyl from claiming lives here. A large part of the province’s $1 million expenditure has been the delivery of naloxone kits to every municipal police force and most pharmacies across the province. A public education campaign to reduce stigma around “opioid abuse disorder” as it is now being called, arrives this summer.

Meanwhile, Clayton is one of a team of 20 peer support workers hired through the Mainline Needle Exchange to deliver clean needles and sterile paraphernalia to prevent infection and the transmission of diseases like HIV and Hepatitis C among people who use.

The emergence of black market, non-prescription opioids means Clayton is also on the front lines advising users “never do drugs alone” and to stick with a regular supplier who might be more interested in keeping their “repeat customers” than an unknown dealer. His opinion.

Clayton says it was easy for him to start using drugs to fill “a void” in his life but once his body became dependent on the high or euphoria, “a sickness worse than any flu” followed. He says the pain of withdrawal made him a victim of “the disease” (or addiction) looking for his next fix for relief. His dependency sent him to prison where he upgraded his education and learned a trade. He credits the support of his family for leading him to embrace methadone and now, at age 48, he says he has job he loves “keeping people alive” until they’re in a place to make better choices.

Sociologist Karen Foster says studies show poverty and class are huge predictors for whether an individual will be drawn to substance abuse. If you are poor and struggling to get through the day, it’s tough to make decisions that can affect your long-term health, she says. A quick fix is tempting.

“People start to use for the fun of it,” says Chris Clayton. “You don’t intend to have to have it.”

Foster says there isn’t enough information to show whether drug use is any more prevalent in rural than urban Nova Scotia. She’s not convinced it is and would like to see an anonymous study designed to explore that question.

Last weekend, RCMP were called to an apartment in Shelburne where a young woman who was having seizures told them she believed she may have injested fentanyl. She was given naloxone (the antidote). RCMP spokesperson Cpl. Jennifer Clarke says the woman and several others in the room admitted to doing cocaine. (There were seven adults between the ages of 18 and 28 and a toddler in the apartment). No drug-related charges were laid because no drugs were found. The woman and another person were taken to hospital in Bridgewater. The two-year-old child was taken to a relative.

This was the first time Shelburne police had been called to deal with a suspected fentanyl overdose. It’s unclear whether it was actually present in the drug being used. RCMP referred the question to the Nova Scotia Health Authority. Senior Communications advisor Carla Adams checked with Poison Control and Emergency doctors before confirming that emergency departments don’t single out or screen for fentanyl because it doesn’t affect the medical treatment a patient receives. Adams did provide figures from the Canadian Health Information Institute that show the number of admissions to Nova Scotia hospitals from “significant opioid poisonings” is rising over time. 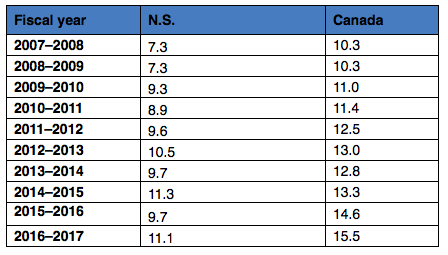 The province’s Chief Medical Health Officer identifies what he calls “troubling signals.” He notes an increasing number of police seizures of street drugs such as heroin and crack or “fake” oxycontin pills that have been contaminated with illegal opioids such as fentanyl. And the first death this past March attributed to carfentanil, a synthetic opioid many times stronger than fentanyl used to tranquilize elephants.

“I think what we need at this point is a frank pubic discussion about not just responding to opioid use disorder but why do people end up using drugs in the first place?” says Dr. Strang. “How do we create models for safer consumption — treating this as a health and social issue and not a criminal justice issue?  We are looking at the possibility of allowing some supervised sites in some places and we’re handing out  clean needles. Instead of blaming people, we are trying to treat them with compassion.”