You are here: Home / Environment / “We are down to our last month’s rent”: naturalists say clearcutting is accelerating

“I worked at the Bowater-Mersey mill for 38 years, and our provincial government makes Bowater look like an environmentalist!” said Brian Muise.

Muise, a member of the Queens County Fish and Game Association, made his comment at the annual meeting of the Nova Scotia Federation of Anglers and Hunters in Truro on Saturday. Muise is frustrated by the amount of cutting he sees taking place in southwestern Nova Scotia “to beat the clock” before the government implements revised forest practice regulations on Crown land recommended by the Lahey Report.

“There are seven contractors working full-time in Queens County right now,” said Muise, who also attended a planning session last week where Jonathan Porter, executive director for renewable resources at the Department of Lands and Forestry, was present. “The companies want to cut 3200 hectares [7907 acres] before the end of the year. And, the Province says only 3% is going to biomass. But I’ve seen logs at the Brooklyn Energy plant that are between 16 feet and 40 feet long.”

Although the Lahey report was issued last August, Lands and Forestry Minister Iain Rankin told journalists in December it would take “up to a full year” to change the rules that govern how and where Crown land gets harvested.

The Federation of Anglers and Hunters invited retired wildlife biologist Bob Bancroft to give a presentation on Saturday entitled “The State of Nova Scotia Forests and Their Wildlife.” Bancroft said “greed” is the only word to describe what is taking place today, and that clearcutting has gone on so long and so fast that if you compare the area of forest cover in Nova Scotia to a bank account, “we are down to our last month’s rent.”

Fewer trees means a loss of habitat for the fish, birds, and game these hunters and anglers say they want to conserve. “How do we get more people engaged in protecting the forests,” asked Nova Scotia Federation of Anglers & Hunters president Travis McLeod, “when most people only see the 20-metre strip of trees along the highway? They don’t walk in the woods the way we do and encounter large clearcut areas everywhere.”

“I know contractors,” Bancroft told his audience, “who have cut the same property twice in their lifetime. These trees are only 30 years of age.”

Bancroft compared satellite photos of Nova Scotia (provided by Global Forest Watch) taken in 2001 and 2014. The photos are annotated to show large areas of Crown and private land in the Liscomb area that reflect changes to forest land: 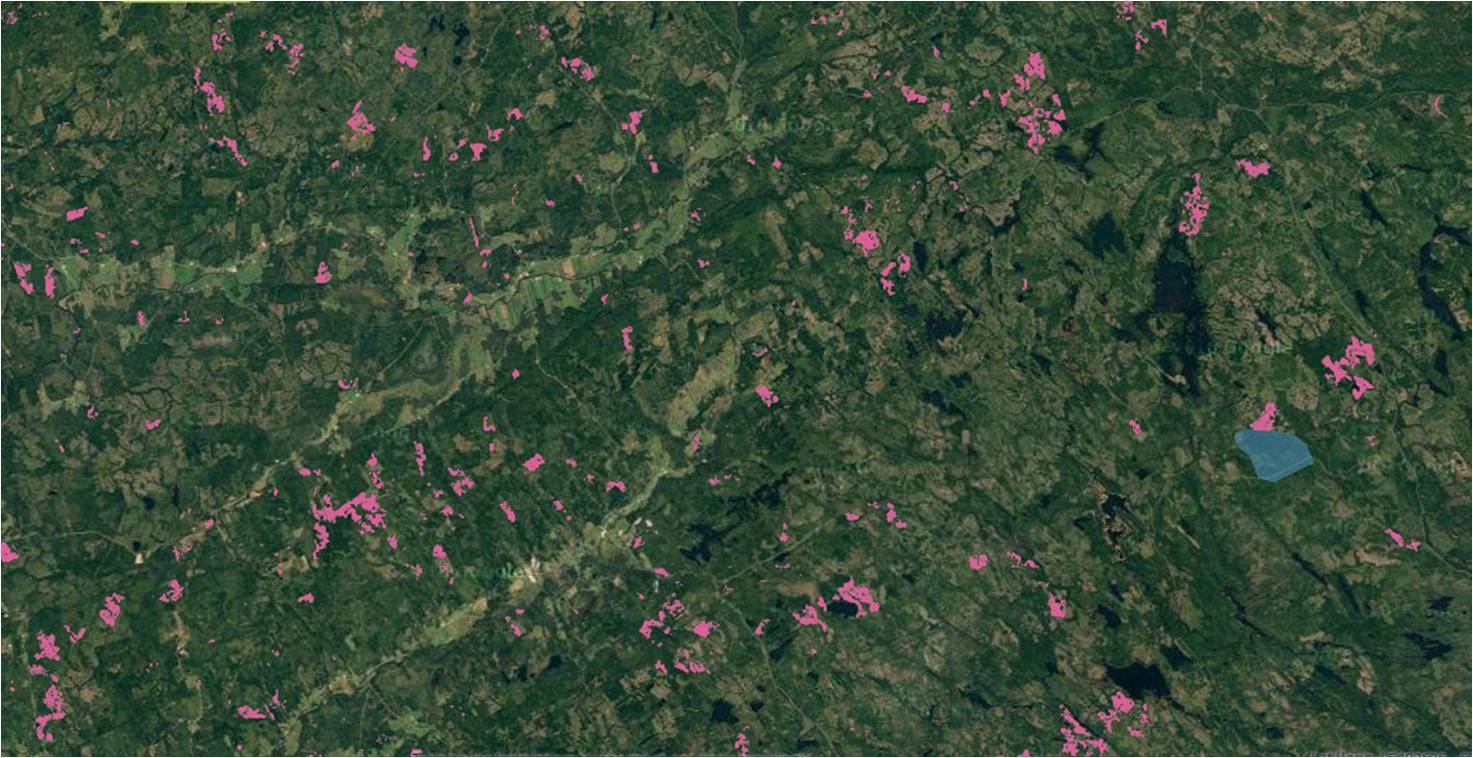 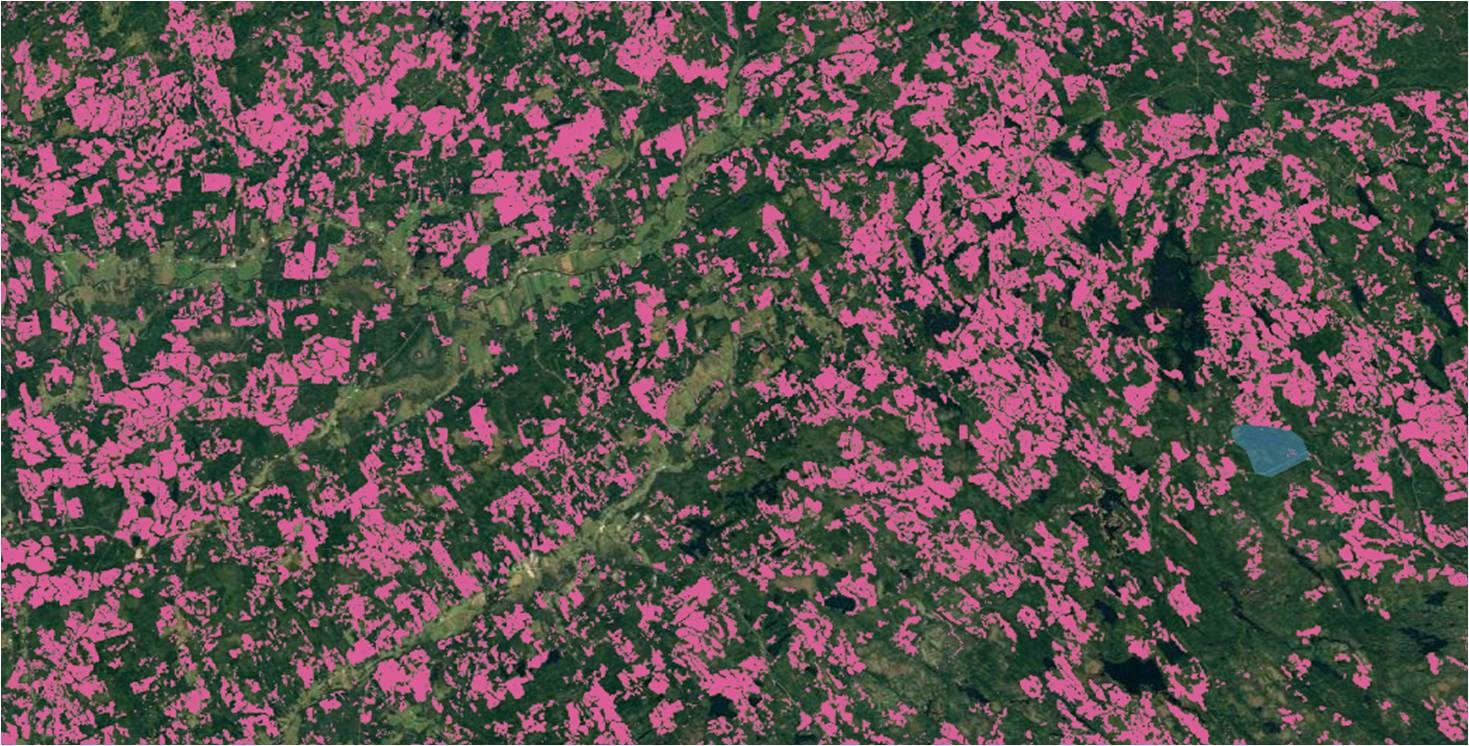 The blue blotch in both photos represents the Abraham Lake Nature Reserve, a 634-acre protected area owned by the Nature Conservancy. That Reserve is in Halifax County, but most of the area depicted in the images is in Guysborough County. The pink colour is used to show the accumulated forest cover loss by 2014.

Bancroft also obtained data from scientists who worked for Ron Colman’s Genuine Progress Index on Forestry. He says that those data, as well as the satellite images of the Liscomb area in northeastern Nova Scotia near Governor’s Lake, indicate that in the 25 years prior to 2014, an estimated 42% of total forested areas in the province (including both Crown and private land) were clearcut.

Bancroft believes if you add biomass tonnage for the past five years and extrapolate the earlier average rate of consumptive harvest (to 2019 — 30 years in total), it’s reasonable (and “disgraceful” in Bancroft’s words) to estimate that as much as 50% of the forest has been cut over the past three decades.

That’s a claim the Department of Lands & Forestry would undoubtedly dispute.

Bancroft worked for the Department of Natural Resources for much of his career, before a very public falling out with his former employer when the Department refused to adopt recommendations which he and scientist Donna Crossland made as part of a consultation panel back in 2010. Bowater-Mersey’s Jonathan Porter (yes, the current executive director for renewable resources at the Department of Lands and Forestry) represented the forest industry on the same panel and issued a dissenting report.

Sadly, Bancroft told the hunters and fishermen that even though the Lahey report endorses the same “paradigm shift” toward more ecological forestry which he and Crossland promoted 10 years ago, a whole decade of unchanged harvesting practices has disrupted habitat for wildlife.

For instance, Mainland Moose are now an endangered species in Nova Scotia. “The forestry contractors leave little clumps of trees for the moose,” said Bancroft. “Moose need mature softwood for shelter in the winter and shade in the summer. To eat, they need 25% or more hardwoods. You get rid of moose food by using herbicides, and that’s the main point where I disagree with Lahey. I think using herbicides is outrageous. If moose are going to use a river, you need to allow for a 60-metre buffer zone from the water. In Nova Scotia, we stick with 20 meters.”

The Nova Scotia Federation of Anglers & Hunters has written a letter in support of a lawsuit spearheaded by Bancroft and several Nova Scotia naturalists’ groups which argue the Province has failed to live up to its legal obligations under the Endangered Species Act. Since the legal challenge began, the McNeil government has introduced a new piece of legislation called the Biodiversity Act which  includes measures to protect wildlife.