You are here: Home / Featured / Union leader pleads for better wages for paramedics 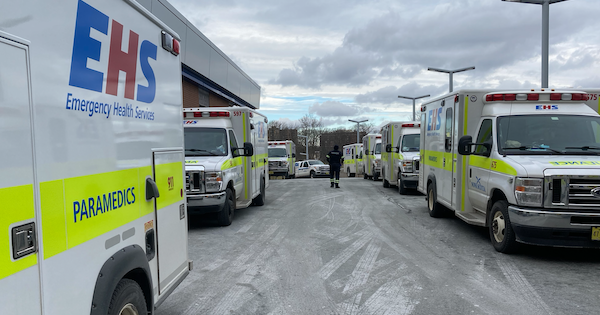 On Monday, Jan. 10, 16 ambulances were lined up outside the Queen Elizabeth II hospital. Photo: Tim Bousquet

Nova Scotia’s paramedics are struggling under an overwhelmed system, recruitment and retention challenges are significant, and without better wages the problem will get worse.

That’s the message the union representing the province’s paramedics delivered Tuesday to the Standing Committee on Health where the discussion focused on government initiatives to address ambulance availability and offload delays.

“Our paramedics are struggling and it’s only getting worse. How much longer are we going to leave our pre-hospital care system to crumble? The time for action is now,” International Union of Operating Engineers (IUOE) Local 727’s business manager Kevin MacMullin said.

“We’re dealing with a system that has been left to rot and our paramedics are the ones left to pick up the pieces. They deserve respect, dignity, and better wages.”

MacMullin said while the union has been told wage increases aren’t being considered because they’re competitive within the Atlantic region, Nova Scotia is no longer competing with other Atlantic provinces.

He said Nova Scotia’s paramedics are among the highest skilled and trained in North America. In the face of a nationwide paramedic shortage, they’re highly sought after and are being lost to better paying jurisdictions like Ontario and Alberta.

“For many, with cost of living at an all time high and wages at a despicable low, leaving is the only option,” MacMullin said. “Wage increases are possible and they make a difference.”

There are currently 29 permanent paramedic vacancies to be filled. Since January, MacMullin said the province has lost 30 paramedics. Of those, 13 have left just in the last month. All 13 were experienced paramedics.

While some are leaving Nova Scotia for better wages, others are changing careers while others are opting for early retirement.

On a daily basis, MacMullin estimated that at any given time, 200 to 250 paramedics might be off work due to sick leave, short or long-term disability.

‘A system in tatters’

IUOE Local 727 business agent Michael Nickerson told the committee he was a paramedic for almost 19 years. Although things were “bad” when he was working, he said it’s much worse now. He appeared emotional as he shared some of the stories he’s heard from the province’s paramedics.

The stories our paramedics share with us are heartbreaking. Imagine logging on for your shift in Bridgewater just to be immediately told to head to Halifax then finding out that the community you left, your community, your loved ones, has three pending calls with crews responding from over an hour away or longer.

Unfortunately, this isn’t a rare occurrence. Imagine being so distraught and devastated that after a day’s work, you go home and vomit. Imagine going to school, working hard and dedicating years of your life to help your community just to go home at the end of every day feeling like you just can’t take it anymore.

Imagine being the paramedic crew who has to respond to call after call where a patient has died because you couldn’t get there in time, not because of anything you did, but because of a system in tatters. This is what our paramedics are facing every day.

Nickerson pointed to numerous media articles about Nova Scotians forced to wait for an ambulance to arrive while their family member struggled in front of them. He asked how it was acceptable, and how committee members would feel if it was their own family member whose life was at stake.

“It affects our paramedics who are out there now on a night shift. It might be driving anywhere from 500 to 700 kilometres, answering calls, covering areas off, responding to transfers. It’s impacting them all and that gets tiring on a person,” MacMullin said.

Already fatigued and tired, MacMullin said some Nova Scotia paramedics face a drive of one, sometimes two hours, to get to their home base after a shift.

“They have to report off sick in order to get back home and try and get some rest because they’re going home, it’s early in the morning, and they’ve got to be back out on night shift that night,” he said.

MacMullin pointed to the Progressive Conservative government’s decision in February to provide a 23% wage increase to continuing care assistants (CCAs). Noting it was a commendable action, MacMullin said it’s now time to do the same for the province’s paramedics.

“The conditions that paramedics are working under are deplorable, and they are leaving because not only the high wages, but the conditions to work in other jurisdictions sometimes are a lot better,” he said.

“So they’re leaving for that. They need a break. We need to get them back. Wages are going to solve it.”

‘Status quo is not an option’

Department of Health and Wellness associate deputy minister Craig Beaton said while there are complex and long-standing issues that can’t be fixed with a new ambulance or the best technology, they are working on the many challenges that exist.

“Often the challenges we encounter are unforeseen and sometimes out of our direct control. However, as a health care system we strive to do better,” Beaton said.

“We cannot continue to fix gaps in the system as they appear. That’s not the answer. The status quo is not an option. Instead, we need to look at system-wide solutions.”

Beaton pointed to the $3.5 million investment announced in February to outfit ambulances with power loaders and power stretchers and to the government’s recently released Action for Health strategic plan.

Beaton also said there is a focus on recruitment and retention of paramedics.

“We are working quickly to make changes and put solutions in place, but we also acknowledge the change cannot be achieved overnight,” Beaton said.

“Some changes will take time and the collective efforts of all of us, the regulator, the employer, employees, and the union.”

Charbel Daniel, executive director of provincial operations for Emergency Medical Care Inc., said as the employer of more than 1,200 paramedics in the province, they’re aware just how the EHS system, along with the entire health care system, is strained.

“A concerted recruitment push is one part of our strategy. Retention of employees is also a top priority. And with that in mind, we’ve created an employee advisory council, in addition to other communication pathways, to solicit feedback from frontline staff on ways to make further improvements to the system and to recruit and retain more paramedics,” Daniel said.

“Through this collaboration and with our health care, government and union partners, we will continue working to alleviate the pressure on the team and allow EMC employees to take the time they need to recharge, especially after the last two years of responding to a pandemic.”

Daniel also told the committee that on June 1, they’re releasing a number of policies and updates that will help keep more ambulances in individual communities and that will also help teams get home on time.

MacMullin noted that this was his third time appearing before a legislative committee since 2019. When he appeared before the Public Accounts committee in February (reported here), he said the system is “nearing the point of failure.”

He again pleaded for better wages for the province’s paramedics.

“However, that takes time and we’re out of time.”

Holding up a pamphlet highlighting the “faces of paramedicine” theme for Paramedic Services Week (taking place May 22-28), MacMullin said one face is missing — the broken face he gets calls from daily, the face representing the paramedics begging for help on the front lines and asking someone to solve the issues plaguing the system.

“There’s only one thing that’s going to solve this right away, and that’s called money and we have to spend that money. How are you going to keep people if you don’t pay them appropriately? You’re not ,” MacMullin said in his concluding remarks.

“How are you going to attract people if you don’t pay them appropriately? You are not. You people all have in your hands the ability right now as MLAs to make a difference in this province. I ask you, please listen to our pleas, and do something about this now.”