You are here: Home / Featured / Twinning study looks at how we can pay, not whether we should

The province has released the first phase of their privately contracted feasibility study into the further twinning of highways in Nova Scotia. The gist: twinning is enormously expensive, and way out of our financial reach unless we change the way we fund roads, probably by introducing more tolls.

Just have a look at this infographic from the province’s presentation on the study: 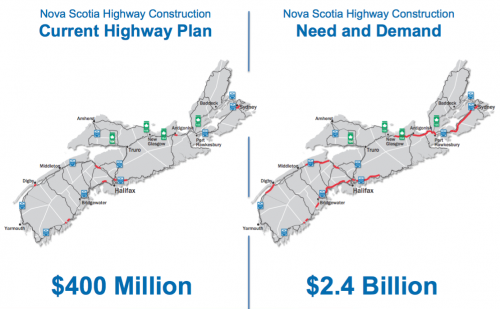 Comparing the NS government’s current highway spending plan with the perceived “need and demand” for highway twinning. Part of the provincial presentation at the release of the highway twinning feasibility study.

Twinning these highways will cost 12 times more than we currently plan to spend on building new highways (about half the $400 million per year), putting it way out of whack with the realities of the Nova Scotia economy.

Strangely enough, unlike other feasibility studies on major infrastructure projects, this highway twinning study did not undertake an economic cost-benefit analysis.

Remember the last commuter rail study for Halifax? The report authors and many of the media reports pronounced commuter rail infeasible, not based on whether Halifax wanted it or could figure out a way to afford it, but based on an economic cost-benefit analysis. There’s no such analysis applied in this provincially commissioned report, even though roughly 50-80 times more public money is at stake.

Instead of investigating economic feasibility, the premise seems to be that twinning is feasible, and the report simply lays out how much it might cost and the possible ways we might pay for it.

“Nova Scotia already has far more asphalt than can reasonably be justified in a province our size,” says Ashley Morton, vice-president of Transport Action Atlantic (TAA), a group that’s been active in regional transportation issues since the 70s.

Morton points out that even with the focus on tolls, the financial projections in the report actually assume the federal and provincial governments will pay for half of the construction. “We would be taxed for 50 per cent of the project costs, and then pay tolls to use the finished product,” says Morton.

Instead, he says, “let’s improve safety by using the infrastructure we already have better, not by paving more of our land and thinning all of our pocketbooks to do it.”

TAA have long been advocates of keeping and improving what little rail service Atlantic Canada has left. Morton suggests that by upgrading our Cape Breton railway, we could divert Newfoundland-bound truck traffic off the 104, thereby reducing risks and improving safety. The necessary upgrades would cost in the neighbourhood of $30 million, says Morton, 38 times less than the $1.2 billion that CBCL estimates it would cost twin/improve the 4 sections of the 104 mentioned in the report. 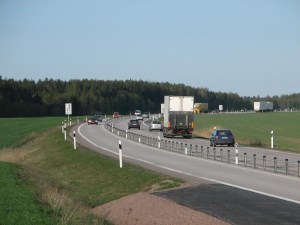 A cable barrier on a three lane road (with alternating passing lane, called a 2+1) in Sweden. Photo: Wikipedia.

Morton also took note of the mention of cable barriers in the report, as an alternative to twinning. Cable barriers mounted along highway medians are designed to redirect errant traffic back into the right lane. “They’re relatively low cost, and have many of the same significant safety advantages (in separating multi-tonne vehicles travelling in opposing directions from each other) as twinning does,” says Morton.

Another way to get more vehicles off the road, says Morton, would be a “reliable, large-capacity bus service” for the South Shore. “You could offer one bus to each of Lunenburg and Bridgewater every 90 minutes, every day, 24 hours a day, for the next 30 years for the price tag that is mentioned for twinning the 103 between exits 5 & 12,” says Morton.

“If we’re talking about infrastructure, what we really need is a dedicated network of small and medium sized, long distance transit buses that serve the main routes around the whole province,” says Groszko.

He points to the Saskatchewan Transportation Company, a provincial crown corporation that provides passenger and parcel bus service across Saskatchewan, all with an annual subsidy in the neighbourhood of $13 million, about half of what it would cost annually just to maintain the roads listed in the twinning report. 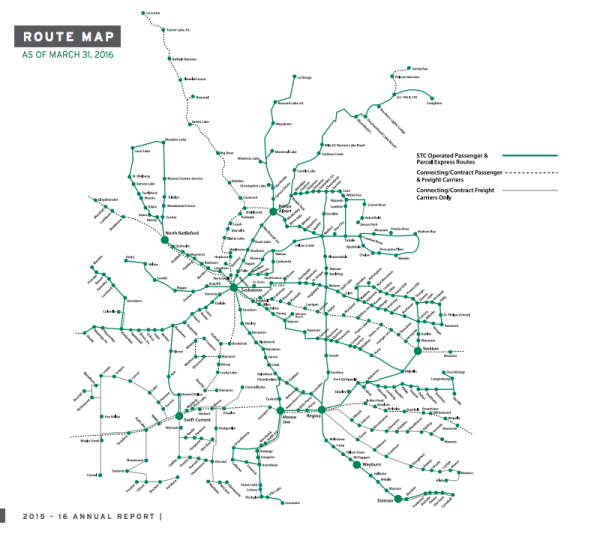 Route map of the Saskatchewan Transportation Company for 2016, from their annual report.

“To me that’s an affordable way to have a huge improvement in social, financial, and health-related sustainability,” says Groszko.

Such a bus service, coupled with increased service on the rail lines we have left, could mean enormous benefits, says Groszko.

Of course, based on past experience, any potential future studies into a provincially supported bus service will likely face a more arduous test of feasibility than did the twinning concept in this recent provincial report.

That’s because public transit is largely not regarded as public infrastructure in the same way that roads are. While we constantly question the economic feasibility of public rail and bus systems, we just don’t apply the same scrutiny to the dollars we spend on building streets and highways. Grozsko thinks that attitude could be costing us.

Perhaps instead of spending $900,000 to look at how we should pay to twin our highways, the Nova Scotia government should take a page from Halifax’s current city management and look into creating a mobility plan for the province. There’s only so many dollars to spend, and in the end we need to find a way to get everyone from a to b that is safe and affordable.