You are here: Home / Commentary / Truth Be Told: Nova Scotia’s forest department hires a PR firm with forest industry ties to help it with transparency

The Nova Scotia Department of Lands and Forestry (DLF) recently hired DG Communications, a public relations firm, to assess the department’s progress in meeting the recommendations of William Lahey’s Independent Review of Forest Practices, specifically in terms of Lahey’s calls for increased transparency and engagement with the public.

Jarrett says that in order for it to do so it “requires a broad new strategic approach for how the department engages with stakeholders and other external audiences to ensure relevant information is provided, and that two-way communication and engagement is fostered.”

The government is paying Davidson $20,160 for four to six weeks of work to “develop a strategy for engagement and communication” that involves conducting a survey of “external stakeholders as a key input to the development of this plan,” including “a broad scope of organizations with whom the department interacts, including municipalities, academics, professional groups, industry representatives, ecology, landowner and conservation representatives.”

Mike Lancaster was one of the people on that list. He’s the Stewardship Coordinator with the St. Margaret’s Bay Stewardship Association. He tells me that his in-person interview with Davidson lasted about 45 minutes and he was asked a number of questions about transparency, how adequate it is and how it could be improved. He was asked, specifically, about where the DLF was falling short in terms of public consultation.

Lancaster’s answer focused on the Harvest Plans Map Viewer — a tool the government introduced in the spring of 2016  to “improve public engagement on planned fibre harvests.” People who are signed up to the mapping system receive emails with links to the map when a new harvest on crown land is announced, and have the ability to comment on it within a set time period, recently increased from 20 to 40 days. 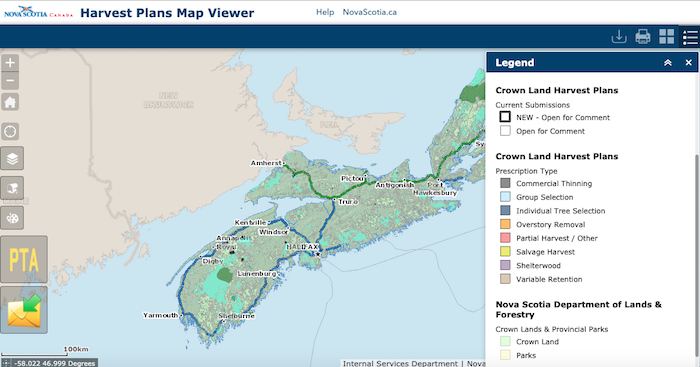 A screenshot of the Harvest Plans Map Viewer – currently the only official means the public has to comment on approved forest harvests.

As I reported here, at the end of January the DLF made what it called “enhancements” to the system. Lancaster says some of these changes are regressive when it comes to transparency.

One of the issues Lancaster raised with Davidson was the removal of the word “clearcut” from the legend. Lancaster says the word was removed “under the guise of it not being a forestry term [but] it is,” he says. Instead, it was replaced with industry-speak — terms such as overstory removal, variable retention harvests, shelterwood, and seed tree — all of which, like clearcutting, are forms of even-aged management, and for the sake of simplicity could just be called clearcutting. Lancaster says labelling treatments as uneven- or even-aged would also increase transparency.

Another of these “enhancements” was that cuts that were no longer open for comment were no longer visible, making it impossible to see the cumulative amount of harvesting taking place in a location over time. But public outcry resulted in a reversal on this, to a degree. Jarrett tells me that “reposting older harvest plans that are no longer open to comments was a result of public feedback.”

The older harvest plans — depicted by yellow polygons — are no longer visible in the default setting of the map, but have to be accessed intentionally through the “archive” layer through a two-step process, that Jarrett sends me: 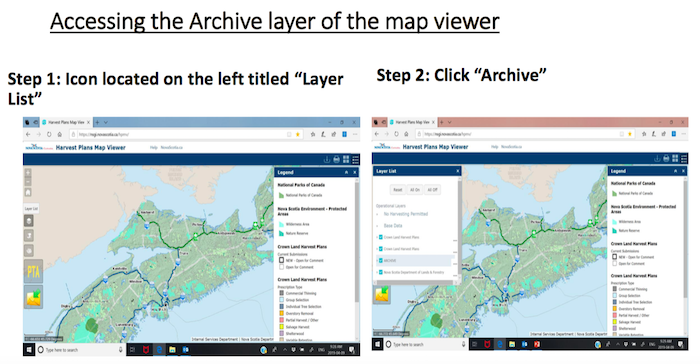 Instructions sent to me by DLF on how to access the “archive” layer of the map viewer.

To illustrate the difference between the default setting and the setting with the archive layer, I’ve chosen an area of land located between Kejimkujik National Park and Lake Rossignol. The first shows how this area appears in the HPMV in the default setting, without the archive layer turned on. The dark green is Kejimkujik, light green is crown land (here it’s the former Bowater Mersey lands), the blue is the lake, and the river is the Mersey. 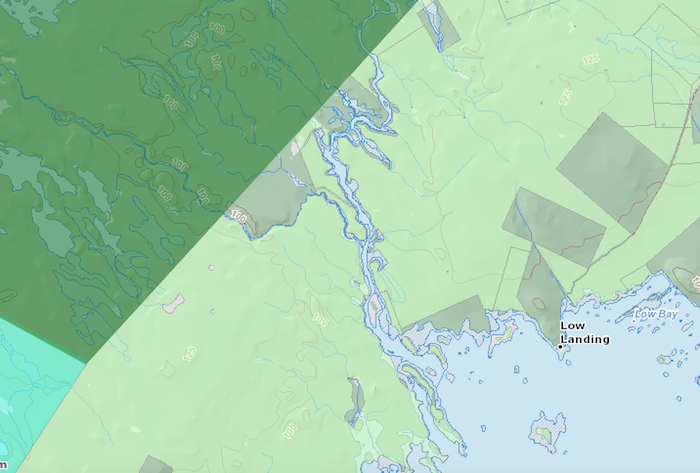 In the next screenshot you will see the same area, only this time with the “archive” layer turned on. The light yellow lines are the harvest plans that have been approved since 2016. 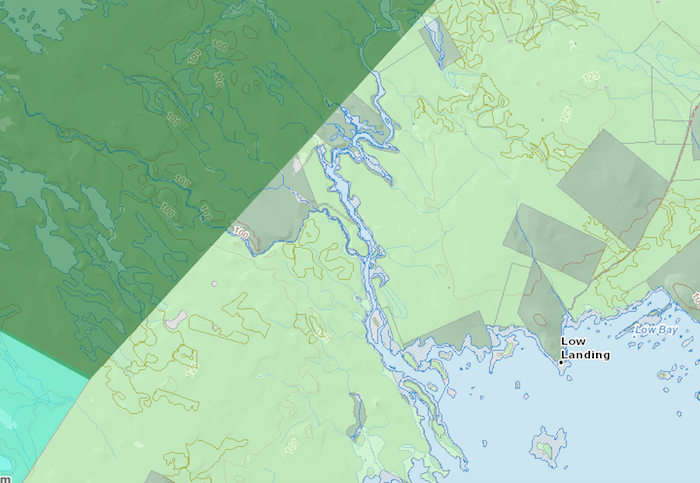 This is where the accuracy of the map gets very murky.

In the next screenshot I’ve turned off the light green layer called “NS Department of Lands and Forestry” — which shows crown land — because it makes it difficult to see through to the ground level. Then I’ve turned on the “NS Imagery” layer, accessed from above the legend on the right hand side of the map. This provides what looks like a satellite image of the province, but turns out to be aerial photographs. 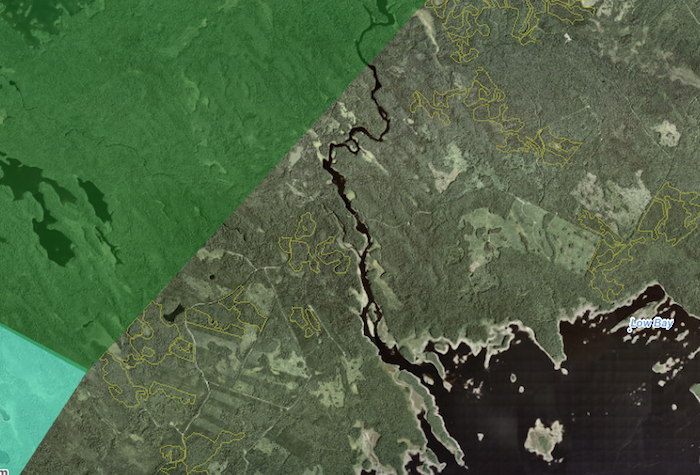 As I said, the yellow outlined polygons represent the approved harvest plans starting in 2016 when the HPMV was launched. There are two problems here: first, the map is incomplete, because it does not include any harvests that were approved prior to 2016 that still haven’t been executed. Secondly, take a look at the polygons that are included. Most of these look like they are still intact and forested. This is because the aerial photos used for the map are old.

Jarrett of DLF tells me that the “NS Imagery” layer, which was provided by the Internal Services Department contains aerial photos captured by the DNR/ DLF and other sources across the province over various time periods. She sends me the following index map showing the years the photos were taken: 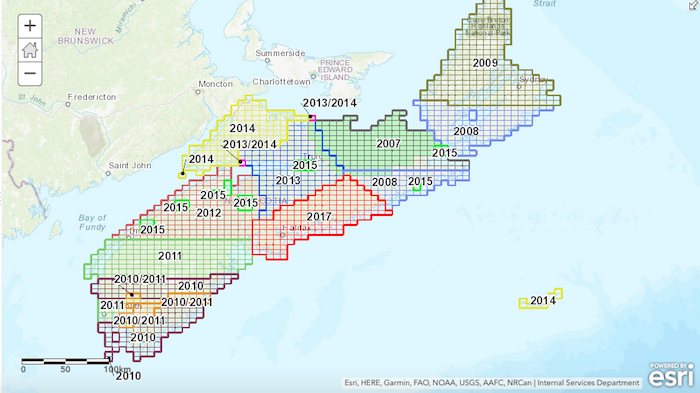 Screen shot of the “index map” showing the time periods when aerial photos that are used in the HPMV “NS Imagery” layer were taken.

In the area of Kejimkujik National Park, the base photos look to be from 2010 or 2011, nearly a decade old, which explains why the forests in the HPMV — ones that have actually been cut down — still appear intact.

For comparison purposes, here’s a screen shot of the same area — between Keji and Lake Rossignol — from an actual satellite photo from Planet Explorer from April 2019. Take note of the clearcutting that’s visible here. 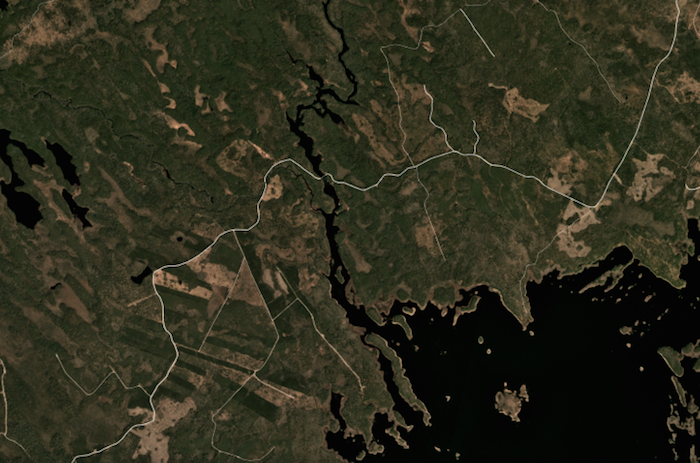 To illustrate this point further, here is a drone photo of a recent clearcut that took place between Kejimkujik and Lake Rossignol: 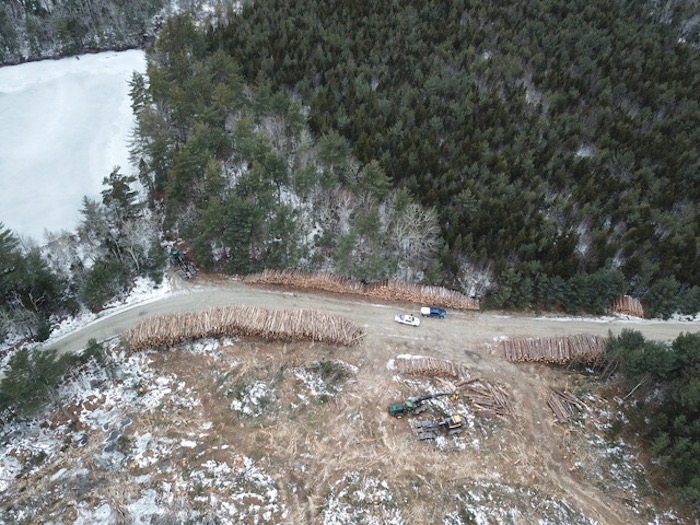 When you look at the HPMV of this area, the polygons indicating approved cuts are visible, but the forest is intact: 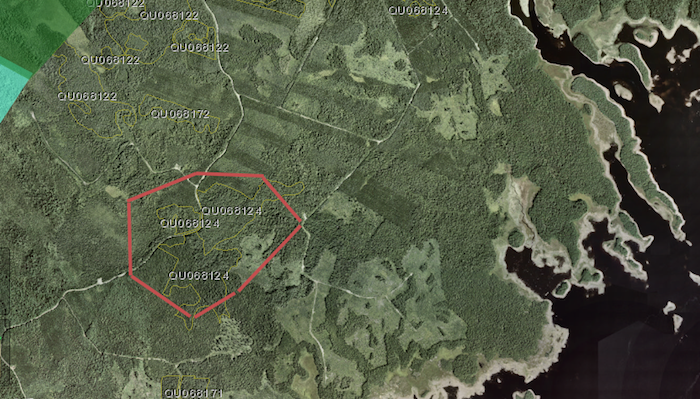 I pointed out to Jarrett that with most of the aerial photos not being current — some dating back a decade — there are harvests that have taken place in the interim that are not captured by the HPMV. This creates a gap in terms of accuracy and transparency. “For the sake of both, shouldn’t the aerial maps at least be current, within a year or so?” I asked.

Jarrett’s response was very telling: “The intent of the Harvest Plans Map Viewer (HPMV) is to solicit information from the public not previously known to the Department of Lands and Forestry or the Licensee, so that comments and feedback from the public can be considered in the approval process. Additionally, the HPMV is the mechanism that allows the department to show the proposed boundaries for each harvest plan.”

In other words, from the government’s perspective, the exercise of posting the harvest plans has never been about gauging the public’s opinion about what is already essentially an approved harvest. It has been to find out if there’s any previously unknown information about a proposed harvest area, such as wildlife sightings, historical land usage, or old property line markers, Jarrett explains.

And this all brings us back to the summer of 2016, just a few months after the HPMV was launched. As I reported here, it was the fifth anniversary of the 2011 Natural Resources Strategy, a document that was grounded in months of public consultation and lauded for being the first time the advice of citizens was used to shape resource policy in the province. But when it came time in 2016 to report on progress towards meeting these citizen-led targets, including a significant reduction in clearcutting and prohibiting whole tree biomass harvesting, the governing Liberals instead abandoned them.

Ray Plourde is the wilderness coordinator at the Ecology Action Centre in Halifax. He was also interviewed by Davidson and told her that the HPMV “is a poor substitute for what was promised in the Natural Resource Strategy. It’s a way of keeping the public at arms-length and not a way of genuinely engaging with them.”

Plourde says he directed Davidson to pages 13 and 14 of the 2011 Strategy, which outlines the “new approach” to natural resources management the government had committed to nearly a decade ago, one that is “collaborative, far-sighted, and holistic.” The Strategy makes clear that in its new approach “interested groups” would be “included in planning and decision making about natural resources,” and the department would “develop and share best practices to engage citizens and interested groups in meaningful ways.”

In fact, this idea of collaboration was such a crucial and all-encompassing commitment on the part of the government that it bears repeating here:

This marks a fundamental change — a transition from the limited partnerships that government and industry relied on in the past, to a broadly inclusive and collaborative way of working. The pressures of competing interests and limited resources made it tempting to favour control over collaboration and to withhold rather than share information. But those approaches have severely limited the ability to solve complex problems and find new opportunities. All Nova Scotians with an interest in our natural resources need to strengthen their resolve and collaborate in good faith.

With promises like this, the public can be forgiven for expecting a lot more from the HPMV. With hopes of meaningful collaboration dashed, and no other official means of registering dissent, the public is using the online map tool to protest the overwhelming use of clearcutting as a harvest practice.

As well, with faith and trust in the department likely at an all-time low, a growing number of people, many of them naturalists or biologists with expertise in ecology and forestry, have begun “ground-truthing” parcels, travelling to some of the areas posted on the HPMV to see if the harvest prescriptions are scientifically justified or if the forest slated to be cut has any old growth or species at risk. Some, I suspect, just want to bear witness to what is about to be lost.

No matter how you look at the HPMV, the public deserves an accurate, up-to-date, and easy to understand map. That’s just a given.