You are here: Home / City Hall / Transit passes coming for 16,800 people on income assistance, but for some, this means already paltry incomes will go down 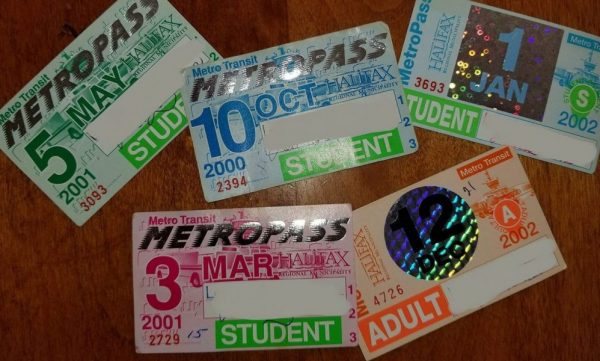 UPDATE (May 15, 2018):  No passes have yet been issued to income assistance recipients, though they are still expected for “late spring”.  Some Examiner readers wrote in to express concerns over the fact that the passes, which will feature a photo identification, would violate people’s privacy by revealing their status as income assistance recipients.  The E-Pass currently features personal information by listing the passholder’s employer.  City spokesperson Nick Ritcey assures that the new income assistance passes will be indistinguishable from current photo ID passes issued by the city, such as the E-Pass.  “It may be a redesign of both passes if necessary to ensure it’s not distinguishable,” says Ritcey.  “A final design hasn’t been chosen yet.”

The province and the city are cooperating on a plan that will put transit passes into the hands of 16,800 people with some of the lowest incomes in Halifax. That’s great news.

The potential deal includes everyone within range of a bus stop receiving income assistance, including those currently disqualified from the city’s Low Income Transit Pass program.

Additionally, besides giving thousands of people new, unlimited access to the bus system, the plan will also give Halifax Transit a revenue boost and an opportunity to get bus service up to snuff in lower income neighbourhoods, just as service around Dalhousie and Saint Mary’s Universities received a bump when a similar system for university students was created over a decade ago.

But there’s a potential downside. All indications are that the Department of Community Services is looking at this new transit pass system for income assistance recipients (for brevity’s sake let’s call it the I-Pass, after its cousins the U-Pass and the E-Pass) as a replacement for its current transportation allowance program. That means the roughly 5,900 people currently receiving a monthly transportation stipend of up to $78, which in many cases is used to cover basic needs other than transportation, will lose it.

As activist and writer Kendall Worth explained recently in the Nova Scotia Advocate, when your shelter allowance is only $535 per month, you find yourself dipping into other budgets to help pay your rent.

“You do what you can to survive,” writes Worth. “You can argue that bus pass money is for bus passes. But it is a fact of life that people on income assistance have been using their bus pass money to pay for things like rent, groceries, power and phone bills, and other necessities.”

So the big question is, how will Community Services handle these facts of life? Unfortunately, it seems it will simply ignore them.

Asked if income assistance recipients getting the new I-Pass would continue to receive any part of their existing transportation allowance, provincial spokesperson Heather Fairbairn answered that the new program will “remove the administrative burden currently involved in getting a bus allowance, such as a doctor’s note indicating that a client has a certain number of doctor’s appointment each month.”

It’s fair to say that along with removing the “administrative burden” of the cash allowance for transportation, Community Services will be removing the cash allowance itself. So while there are approximately 10,900 people gaining newly subsidized access to transit passes, there are 5,900 people trading cash income for transit passes. And for those folks, the introduction of the I-Pass is less than ideal.

Income assistance is notoriously low in Nova Scotia, and basic needs like transportation are treated as special needs. You need to demonstrate your particular need, usually in the form of copious medical appointments (12 or more a month), before an allowance will be approved. And in the past three to four years, social workers and income assistance recipients have been reporting that people have been losing their transportation allowances, and that it is becoming more difficult to get them in the first place.

The I-Pass program, at least in theory, flips the script on Community Services’ increasingly stingy attitude toward access to public transit.

Thankfully, the department now seems to be acknowledging that everyone needs to get around, and for reasons reaching far beyond medical appointments. And so every person receiving income assistance who also lives within 500 metres of a bus stop will get the I-Pass. Community Services has also included dependent children in the equation, meaning about 3,000 children and young adults will get passes along with their parents and guardians. “Clients outside of the Metro Transit service area and/or those with specialized needs will continue to have access to supports through the existing program,” says Fairbairn.

However, this change of attitude when it comes to public transit doesn’t fix the larger problem of below-subsistence-level rates for income assistance. And for some 5,900 people, the loss of a cash allowance will actually exacerbate it.

How the I-Pass will work

Though the program was announced in December and was meant for launch this spring, the Department of Community Services has not released any further details on how it will be structured. What we know, we know from a declassified council report which council approved in camera in December, just before the DCS announcement.

The I-Pass will work like the U-Pass, in that it will be a bulk purchase scenario, with the province paying $21 per person per month.

Unlike the U-Pass, which comes in the form of a sticker attached to a university student ID card, the I-Pass comes with the risk of passes going up for resale, something that happens in similar scenarios in other jurisdictions, and even occasionally with current Halifax Transit monthly passes. 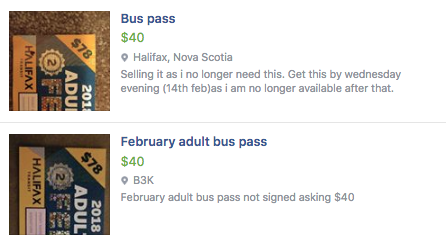 Transit passes available for sale on a social media group.

The solution proposed by city staff in the December report is to require the use of photo ID cards. This could mean something akin to the current E-Pass system. With E-Pass, workers get a 25 per cent discount on the monthly pass rate by signing up for annual passes. They are then issued photo ID passes, which prevents them from reselling and profiting off the discount. 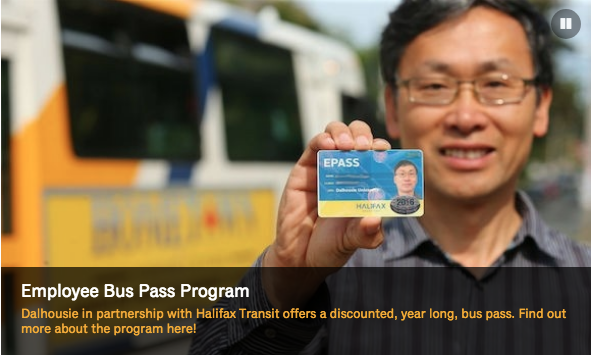 Dalhousie University is one of the few employers currently making the E-Pass available to its workers.

If Halifax Transit wanted to really class up its act, it would simply offer the same annual pass, with photo ID included, to both E-Pass and I-Pass riders. (Since the fraud issue has already been solved for E-Pass, why bother creating a separate solution for I-Pass?)

Twenty-one dollars may seem like a hefty discount on the regular adult pass cost of $78, but it will not be hardship for the city. In fact, the December staff report predicts a revenue boost for Halifax Transit “of between $0 and approximately $4.2 million annually.” (Maybe it can use some of that to help cover the imaginarily large losses from the Low Income Transit Pass program.)

The plan gives Halifax Transit a reliable new stream of income with which it will be able to adjust routes and schedules to accommodate the new pass-holders. At least that’s what they did for new U-Pass holders when they came on stream. For I-Pass, it remains to be seen what Halifax Transit will do, though the December staff report indicates a wait-and-see attitude towards system adjustments.

“It is anticipated that much of the demand generated by this new program will result in trips taking place outside of the rush hour period during the day when there is adequate capacity available within the existing level of service,” reads the report.

With some aggregated data passed along from Community Services (say, the first three digits of postal codes for 16,800 new pass holders), Halifax Transit might not have to wait and see, but could actually ensure that its new riders are getting a boost to their service as the passes come online.

There are plenty of details to be ironed out before the I-Pass, or whatever it ends up being called, will be a reality. Both the province and the city have the opportunity to do well by the 16,800 people who will be involved. Though for the 5,900 current recipients of transportation allowances, it’s hard to see how anything but an upward adjustments to income assistance rates will mitigate their loss.