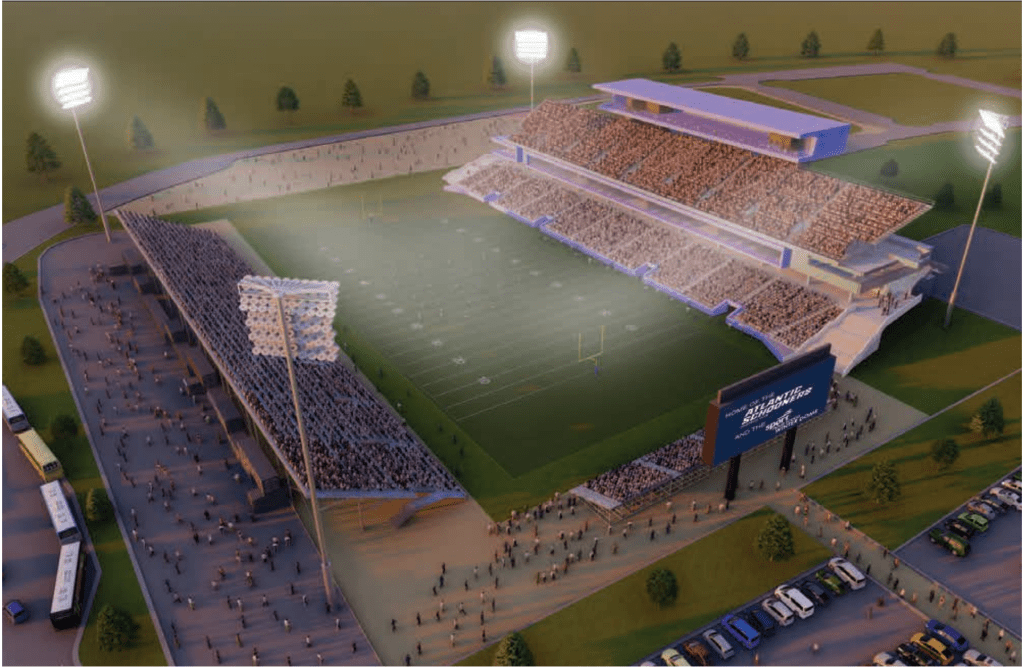 The group that represents hundreds of tourism operators in the province is urging the McNeil government to reject a proposal to build a $110 million football stadium on the former Shannon Park military base in Dartmouth.

A private consortium called Schooner Sports and Entertainment (SSE) wants the province to slap visitors with a new tax on car rentals and a two to four percentage point increase in the surtax on hotel accommodations.

“Like most Nova Scotians, the Tourism Industry Association of Nova Scotia (TIANS) was shocked at the suggestion that the private sector consortium, Schooner Sports and Entertainment, would suggest increasing the visitor levy on accommodations and car rentals in order to fund the proposed Sports Stadium as outlined in their proposal to HRM,” says a statement released this afternoon by TIANS president Darlene Grant Fiander. “The fact that no communication or outreach was made to the tourism industry on this issue speaks for itself. Tourism is incredibly important to the Nova Scotia economy and requires strategic investments to ensure we reach our economic goals. The indiscriminate suggestion that we should increase tax on all visitors using accommodation and car rentals to fund a private sector venture is completely inappropriate.”

Nova Scotia residents would also pay those fees. SSE is asking the province to direct that new revenue — estimated at $3-4 million a year — toward payments on a $30 million commercial loan it plans to take out to build a 24,000 seat stadium to house a Canadian Football League franchise.

The president of the tourism industry association worries that if the province agrees to new and additional levies on car rentals and overnight accommodations, that could result in fewer visitors to the province and fewer jobs in a business that is the largest employer outside government itself.

“The discussion on Visitor Levies is contentious at the best of times,” continues the written statement from TIANS. “Currently there are three regions of Nova Scotia that collect a visitor levy on the accommodation sector and these funds are to be used for regional marketing, not infrastructure.”

During Question Period in the Legislature a week ago, Dartmouth North MLA Susan Leblanc asked the premier if he was prepared to collect and pay the $3-4 million a year SSE is requesting.

“I’ve said before no General Revenue will go toward the stadium,” Premier McNeil reiterated. “But if there are other revenue sources, we would look at those in the totality of the economic footprint.”

McNeil said he himself has not yet looked at the 435-page proposal from SSE. But he’s prepared to entertain the idea.

Meanwhile, there are signs the tourism industry may have plateaued despite aspirations set out in the Nova Scotia Commission on Building A New Economy (also known as the Ivany Report). The report set a goal to double revenues from tourism to $4 billion a year by 2024. That’s only five years from now.

The latest “Year to Date” numbers available to the end of July, 2019 show the number of people visiting the province declined by 2% from 2018. So did the number of room nights sold, down 2% in Halifax and averaging 3% in the rest of the province (22% in the Yarmouth area). Nova Scotia also received 19,500 fewer visitors in 2018 than in 2017. Despite that modest decline, revenues from tourism still hit a record $2.61 billion, on par with $2.6 billion the previous year.

If you look farther back to 2010, revenues from tourism stood at $2.02 billion. Today they are hovering around $2.6 billion, a significant increase but nowhere near the potential growth projected by the $4 billion target set in the Ivany Report.

Tourism Nova Scotia statistics say since 2013, the number of visitors to the province has grown by 27%. It’s worth considering how much faster those numbers might have grown if Nova Scotia were a lower-cost destination for food, drink, and accommodation. Instead the provincial tourism strategy has shifted to chasing high-end visitors with more disposable income to spend.

Will the premier fumble the ball by making Canada’s Ocean Playground an even more expensive place to visit?