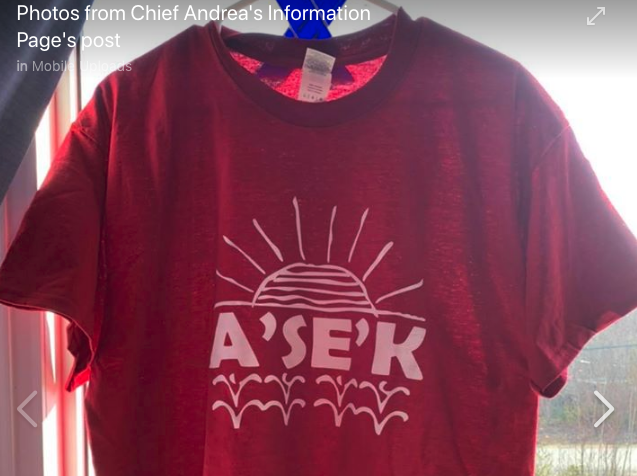 Although the COVID-19 pandemic has prevented PLFN and allies from gathering to celebrate the occasion, it is a momentous one.

A January 29 ministerial order from Environment Minister Gordon Wilson stipulated that by April 30, 2020 the Northern Pulp mill on Abercrombie Point “shall cease discharge of all wastewater” through its effluent pipeline to Boat Harbour. That’s today.

This puts an end to nearly 53 years of pulp pollution flowing into the water body known by the Mi’kmaq as A’se’K, or “the other room.”

The same directive stipulated that the pipeline itself be sealed by May 1, 2020 — tomorrow.

Once the Boat Harbour Remediation Project has received environmental approval from the federal government, the long process of removing contaminants and restoring A’se’K as a precious tidal estuary for PLFN can finally begin.

Earlier this week, PLFN Chief Andrea Paul visited what is known as “Point A,” where the rancid-smelling brown pulp effluent used to gush out of the pipeline into a channel, which carried it to settling and aeration ponds, and then into the large stabilization basin of Boat Harbour. 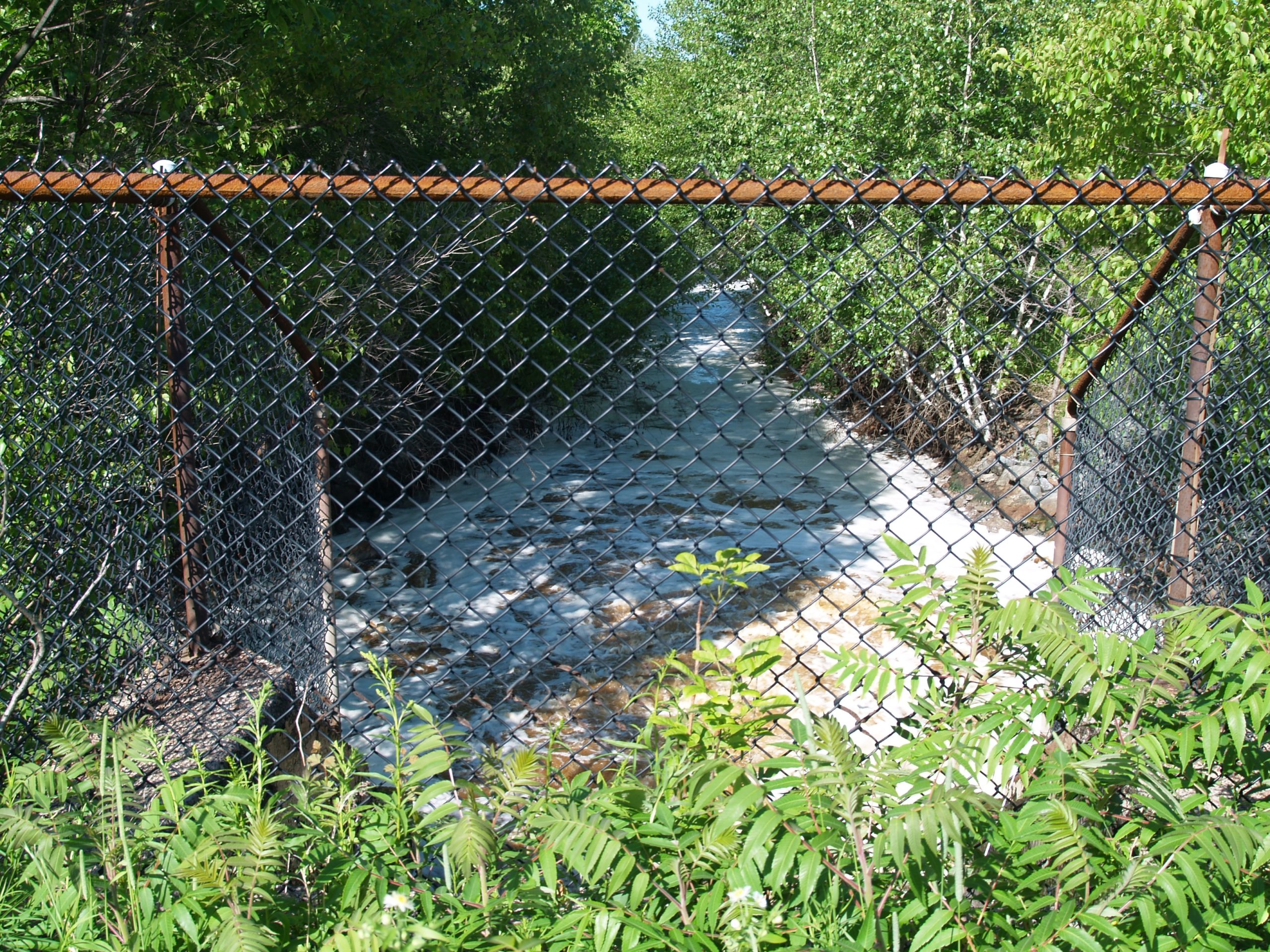 Effluent currently flows thru a pipe from the mill to Boat Harbour. Photo: Joan Baxter.

In a live Facebook post, an ebullient and exuberant Chief Paul exclaimed at the absence of reeking effluent that once filled the channel as she filmed its rocky bottom. She said it looked “great,” she could hear the birds, it was “beautiful,” and that she was happy. 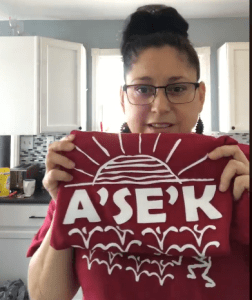 In preparation for A’se’K Day, Michelle Francis-Denny, Community Liaison Co-ordinator for the remediation project, also took to Facebook. She let the PLFN community know that a package was being delivered to each home on the reserve. The packages were hung on doors in respect of COVID-19 restrictions. They contained tobacco ties and new red “A’se’K” t-shirts.

In a Twitter message, Francis-Denny told the Halifax Examiner that the dark red colour of the new A’se’K shirt is “more traditional,” and that is was chosen because it “signifies our strength and resilience and the new designs were chosen to reconnect us to the land and water.”

She said A’se’K Day means an enormous amount to PLFN:

It really is a great day and it’s difficult to capture all the emotions we all feel. It is our hope that hanging our shirts in our windows today will bring us a sense of accomplishment and peace, safely from our homes. I’m encouraging everyone near and far to share this special day with us, if you have a shirt [with A’se’K on it], hang it for people to see. If not, just take some time to reflect on our journey and say a prayer for our future.

Asked what it was like on the PLFN reserve with no more pulp mill emissions fouling the air and stinking effluent polluting the water, Francis-Denny replied:

I remember a day last month … when the community awoke to a very thick fog. And they were all so amazed and in awe that there was no smell in the air … the shock that most of the community have never experienced this [natural fog] in their whole lifetime was so overwhelming. It was [like a] baby learning how to walk. Discovering something new … it really meant a lot to people. You could tell by their surprise.

Even as the people of PLFN — and throughout Pictou County and elsewhere that the pulp mill’s emissions travelled in northern Nova Scotia and across the Northumberland Strait to PEI — are getting used to the absence of the stench in the air, Northern Pulp has apparently not given up hope of re-opening the mill one day.

Last year, the company said it would have to close the mill for good if the province didn’t amend the Boat Harbour Act so that it could continue to use Boat Harbour for its effluent after the deadline of January 31, 2020, until such time as a new effluent treatment facility was approved and constructed.

After Environment Minister Gordon Wilson decided on December 17, 2019 that Northern Pulp would have to submit an environmental assessment report “to address deficiencies in the information” it had provided in its earlier Focus Report and environmental registration documents, Northern Pulp announced it would cease operations at the mill.

In an apparent about-face, on January 2, 2020, Northern Pulp then informed Nova Scotia Environment that it intended to continue with the Environmental Assessment (EA) process for a new effluent treatment and disposal facility.

On January 8, the province released the draft terms of reference (TOR) for the environmental assessment report, and the public had 30 days to review and comment on them.

Twenty-four sets of comments were submitted by the February 7 deadline. They came from five federal government departments, eight provincial ones, PLFN, 19 “anonymous” sources, the Pictou County Watershed Coalition, the Gulf of Nova Scotia Fleet Planning Board, Prince Edward Island Fishermen’s Association and the Maritime Fishermen’s Union, Ecology Action Centre, Friends of the Northumberland Strait, and the United Association of Journeymen and Apprentices of the Plumbing and Pipe Fitting Industry of the United States and Canada Local 244.

All these were provided to Northern Pulp, which then submitted its own comments on the draft TOR on March 30, including its reactions to the comments submitted by others.

A week after that, at closing time on the eve of the Easter long weekend, and during the worst health crisis this planet has seen in a century, Northern Pulp decided to send out a media release. The Halifax Examiner reported on the off-base and tone-deaf statement here, noting that:

Rather than wait for the government to finalize the TOR … Northern Pulp decided to issue a statement to the media, listing in no uncertain terms the way Nova Scotia Environment should implement “specific environmental assessment report processes and guidelines” for the mill’s new effluent treatment facility.

Although the statement says Northern Pulp is “requesting” these terms, it reads very much like a thinly-veiled ultimatum.

A “roadmap” for Northern Pulp?

Late in the day on April 28, at 5:48pm, the province released the final terms of reference for the environmental assessment report. The Nova Scotia Environment press release stated:

Northern Pulp now has up to two years to submit the report on its proposed new effluent treatment plant.

Although the final TOR are not dramatically different from the draft, there are indications that Northern Pulp’s comments did influence the wording and content of the final version.

…environmental record, including any enforcement actions taken under federal or provincial environmental legislation, is not relevant to the [effluent treatment facility] Project and should not be required in the EA [environmental assessment] Report.

Nova Scotia Environment appears to have complied with this; there is no requirement to include in the report any mention of the mill’s environmental record, which includes pipeline breaks and emissions exceedances. (The Halifax Examiner has asked for an analysis of the final TOR from legal experts who also provided comments on the draft terms, and will report on these when they are received.)

Two hours after the province released the final TOR on April 28, Northern Pulp issued its own media statement:

“We will take the necessary time to thoroughly review, understand, and seek clarity from Nova Scotia Environment where needed, and determine if the terms of reference provide a workable path forward,” said Graham Kissack, Vice President of Environment, Health and Safety at Paper Excellence Canada.

For now, and especially today, PLFN and its allies are focused not on what Northern Pulp may be up to, but on the official and much-anticipated end to the pulp pollution in Boat Harbour.

We’re trying to figure out how people can start to heal. The Boat Harbour legacy … it’s impacted us through generation and generations. There isn’t a timeline for healing … whenever you feel ready, whatever your journey looks like, we just hope you can draw strength from this and positive vibes for the future.

We’re very glad to be able to celebrate, and we’re looking forward to coming together some time in the future to have some ceremony and to go to A’se’K and pray. For some, that’s when our healing journey’s going to happen.

And on Twitter, Chief Andrea Paul had this to say:

Today is a great day! A’SE’K Day! No more effluent. No more pollution. What a beautiful way to end the month. NEW BEGINNINGS.