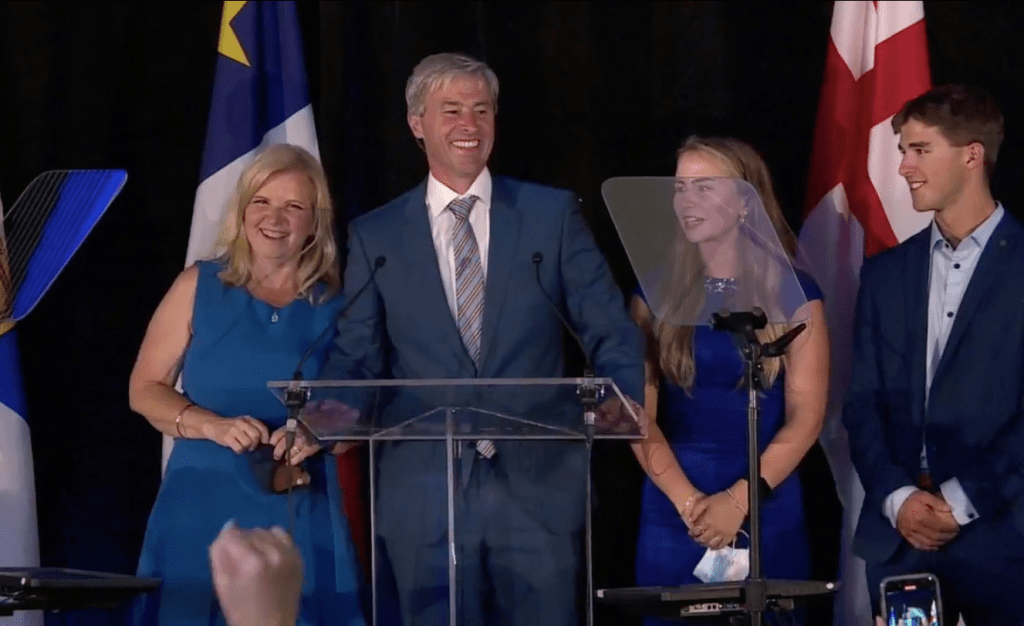 Tim Houston’s health care-focused campaign resonated with voters across the province, if the results are any indication, with the the Progressive Conservative Party trouncing the Liberals on the way to a majority government.

“We made history in this election. And not just here in Nova Scotia, but in all of Canada. We proved that just because there is a pandemic, doesn’t mean government gets a free pass,” Houston told supporters gathered at the Pictou Wellness Centre on Tuesday night.

“We proved tonight that accountability still matters, that ideas still matter, that solutions still matter because politics is not a sport. It’s serious business, and everywhere in Nova Scotia real people have real issues, and they are counting on us to solve them, like a doctor shortage, an ambulance crisis, and underinvestment in our seniors.”

Houston promised to fix Nova Scotia’s health care system with his new mandate, the first for the PCs since 2009.

Liberal leader Iain Rankin conceded to Houston in a speech from the Halifax Convention Centre, congratulating his opponent.

“I have said that it is such a privilege to be a premier, and I know that you will feel the same way too,” he said.

“You asked me on July 17 why we called this election. We called it because we believe that we’re in a pivotal moment in our province’s history, and we wanted to have a clear direction. Tonight, the voters provided it and they’ve chosen our future path.”

Rankin vowed to remain on as Liberal Party leader.

When vote counting was suspended in six ridings early Wednesday morning, Houston’s PCs had 31 of the 55 seats in the Nova Scotia Legislature. The Liberal count was knocked down to 17 and the NDP were on the verge of gaining one seat to end the night with six.

Three of the lost Liberal seats were held by cabinet ministers — Randy Delorey, Lloyd Hines, and Suzanne Lohnes-Croft — and another was trailing, Labi Kousoulis.

PC MLA-elect Michelle Thompson beat Delorey in Antigonish by 1,608 votes. She told the Halifax Examiner that it was the party’s health care-focused platform that brought voters to the PCs’ side.

“I’ve been a registered nurse for 30 years and I talked a lot with people about health care on the doorsteps,” Thompson said.

“I had great conversations with people and I feel that that that message resonated with the people of Antigonish and the platform that we put forward was something that folks are willing to change to.”

Thompson, who was celebrating her win with family and friends in an old barn converted to an event space, said she was looking forward to working with her fellow MLAs and with local governments in the area to address issues like the condition of rural roads.

“I want to be a fair and determined advocate for my community,” she said.

Next door in Guysborough-Tracadie, broadcaster and now PC MLA-elect Greg Morrow beat Hines by 1,710 ballots, taking more than 63% of the vote. (Jennifer Henderson profiled the riding in a recent Morning File.)

“And we were honest with people we said, ‘We’re not going to fix it overnight, and it’s going to be expensive, but we’re willing to invest because Nova Scotians are worth it,” Morrow said in an interview.

Morrow, who was celebrating at home with family, friends and his campaign team, said rural internet is another issue he’ll be bringing to the legislature.

While the NDP didn’t make the kind of gains the party may have hoped for, it was on its way to picking up one new seat, and dominated the urban centre of HRM.

Party leader Gary Burrill was first to speak, before the networks cut him off to carry Rankin’s speech. He said his party ran a campaign that didn’t follow the script, one focused largely on affordable housing and rent control.

“It was supposed to be a pretty sleepy, dozy affair where everybody kind of had their minds on nothing except the summer,” Burrill told supports gathered in Dartmouth. “And instead, we found that all those people that we have met on all those tens of thousands of doorsteps have been so engaged and and so interested and and so concerned.”

The NDP was poised to pull off an upset in Halifax Citadel-Sable Island, with Lisa Lachance ahead of Kousoulis, finance minister and Liberal leadership contender, when the vote count was suspended with seven polls left to count.

In that riding and five others — Argyle, Cumberland North, Dartmouth South, Halifax Atlantic, and Halifax-Chebucto — the count was suspended after midnight “due to an outstanding volume of votes and limited staffing.”

In Argyle, there were still two polls to count, but PC candidate Colton LeBlanc was up 2,000 votes.

There was still one poll left to count in Cumberland North, but it looked like independent candidate Elizabeth Smith-McCrossin would win, ending the night nearly 1,000 votes ahead of Liberal Bill Casey. Smith-McCrossin was booted from the PC caucus after the border blockade in June.

Liberal Brendan Maguire had secured the win in Halifax Atlantic with one poll left to count.

The count was expected to resume at 10am on Wednesday.