You are here: Home / Commentary / Tim Houston says Mark Furey has a conflict of interest in the mass murder inquiry 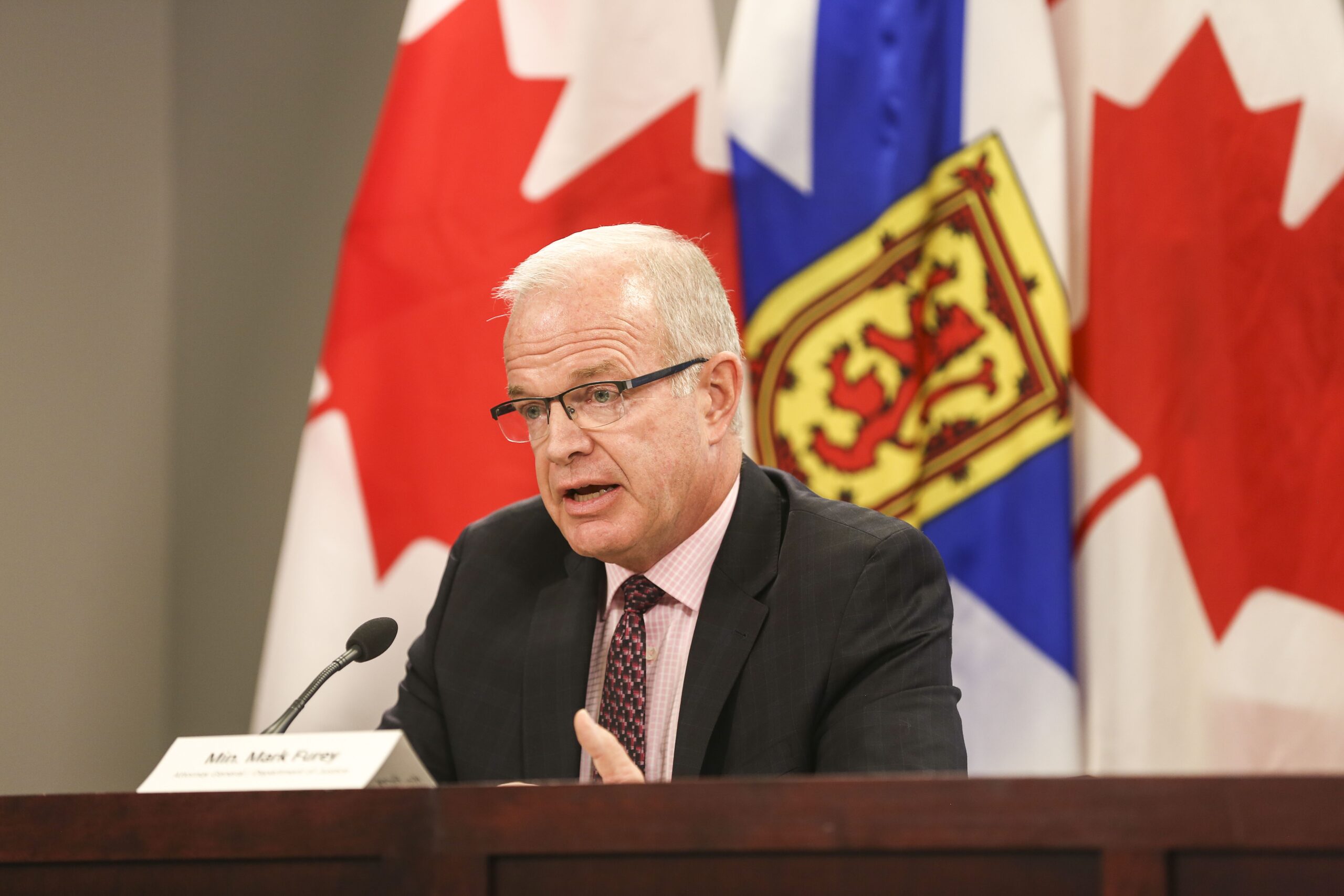 On Tuesday, PC Leader Tim Houston submitted an affidavit to the Conflicts Commissioner of Nova Scotia stating that he believes Justice Minister Mark Furey has a conflict of interest in regards to the inquiry into the mass murders of April 18/19.

You can read Houston’s affidavit here.

Houston notes that Furey worked for the RCMP for over 30 years, including a year-and-a-half stint (from May 2007 to August 2008) as a “Policing Consultant (Advisor to the Minister and Deputy Minister)” and then from August 2008 to July 2010 as the District Commander in Lunenburg, which Houston characterizes as a rural district.

…there have been suggestions of a practice in rural policing called “risk it out” in which officers are left to work with no or insufficient back up, which I verily believe. The RCMP was allegedly forced to call in additional support from as far away as New Brunswick on April 19 and 19 and yet there was apparently no contact with the closest local police force [i.e., Truro’s]. As this aspect of the investigation is discussed, RCMP policy, that Minister Furey may have been involved in during his prior career and currently likely overseeing, as Minister, could be a key element of an inquiry.

Houston attached a copy of the Halifax Examiner article “Nova Scotia massacre: Did the RCMP ‘risk it out’ one time too many?”

I believe it is reasonable to assume that in a more in-depth inquiry, policies on staffing that led to the standard scheduling arrangement, along with the scheduling on the days of the Portapique tragedy, would be examined.

[I]f the RCMP were understaffed during the Portapique tragedy, the question of “why” would have to be answered at a fully inquiry, which could lead to discuss on the “risk it out” policy. A policy that Minister Furey, as a former District Commander, and as current Minister of Justice, is most likely, not only aware of, but may have also practiced or potentially currently oversees.

[I]n the event Minister Furey was involved in implementing “risk it out” or to the extent that he was aware of its existence, he would likely have an awareness of the safety concerns over which he presided and potentially failed to correct, as the Minister responsible to the people of Nova Scotia for the functioning of the RCMP.

[B]ased on the role of the Minister of Justice and Minister Furey’s prior role with the RCMP, it stands to reason that it would be appropriate for an individual who may have participated in the very practice likely to be at issue, to have any sort of decision-making authority over what would and would not be considered in relation to examining and investigating the Portapique tragedy.

It’s impossible to argue the point. Even if one were to take the position that staffing levels were not an issue on April 18 and 19, you’d have to defend that position, which would necessarily involve Furey taking a stand on the issue, which would again involve his past actions as District Commander, Consultant, and now Justice Minister. It’s inherently a conflict.

Houston also notes that Furey is relying on the Conflict Commissioner Joe Kennedy’s earlier ruling that Furey had no conflict in the Glen Assoun matter.

Consider: before he was appointed Conflict Commissioner, and before he was Chief Justice, Kennedy was a judge in Lunenburg, and Furey himself, as well as the RCMP officers Furey oversaw, would appear in Kennedy’s courtroom. Arguably, Kennedy himself had a conflict in deciding whether Furey had a conflict.

In a small province like Nova Scotia, where professional careers will cross many times through the years, that may be a stretch, but why should a finding that Furey did not have a conflict in one specific instance be used as a blanket exemption from all other potential conflicts?

At the very least, Kennedy should make a finding specific to the issues raised by Houston with regard to the mass murder inquiry.