You are here: Home / Environment / The Lahey Review of Forest Practices is published; what does it mean? 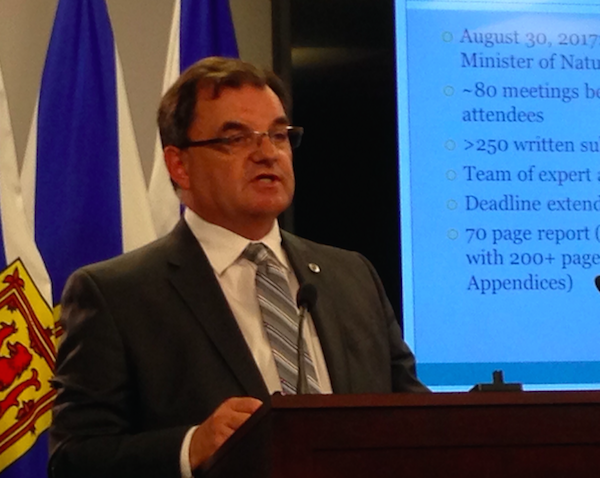 Bill Lahey’s prescription was sweeping: “We need a new paradigm to manage our forests.”

That’s what the University of King’s College president told journalists after handing the McNeil government the results of a year-long review of forestry practices in Nova Scotia. McNeil appointed Lahey last August after choosing not to implement key recommendations of the 2011 Natural Resources Strategy: reduce clearcutting by 50 per cent and ban the practice of full-tree harvesting.

Lahey, a lawyer and a former deputy Environment minister, said that even if his 45 recommendations result “in the contraction of the industry” and the closure of a mill because wood supply drops, his top priority must be to “protect ecosystems and biodiversity.”

“I believe if we continue on the path we are on, we are headed toward a significantly degraded forest,” said Lahey. “In the long term, that’s not in our best interest economically. Having a more mixed forest will also provide a better defense against climate change.”

Based on the advice of 21 experts he hired, Lahey says, “There is too much clearcutting going on in areas where it shouldn’t be.” He’s recommending the government adopt a three-pronged, ecological approach that would see:

Iain Rankin, who — after more than a year as Minister of Environment —became Minister of Lands and Forests a month ago, said he thinks Lahey’s “core recommendation to take an ecological approach is a good one.” In the media briefing he stated, “We are committed to change.” But the Minister refused to be more specific about what “change” would look like until he has had a chance to read the entire report.

One controversial recommendation in the Lahey Report would require a process equivalent to an environmental assessment by an independent third party before granting or renewing harvesting allocations on Crown lands for forestry companies. The report says the purpose is to “ensure that forestry on Crown land will adhere to the principles of ecological forestry.”

Jeff Bishop says the prospect of such a change “scares” him. He’s executive director of Forest Nova Scotia, which represents 600 industry participants from the biggest pulp mills and sawmills to Christmas tree growers and some woodlot owners. Bishop says that change would “increase red tape.”

While Lahey’s approach may sound like a victory for environmentalists opposed to clearcutting on both Crown and private lands, paradoxically, the report’s executive summary notes the ecological model could actually increase clearcutting in the short term:

My recommendations for Crown land, if implemented, are likely to increase demand for wood from private land, including woodlot owners, a benefit for those who want to sell their wood. These recommendations will, however, create supply complications for mills and other buyers. A shift in harvesting on private land will also, at least in the short term, likely mean more clearcutting overall, since roughly 90 per cent of the harvesting that happens on private land is by clearcutting.

The unsettling prediction of more clearcutting is partly the result of who owns forest land in Nova Scotia. The majority of the forest (about 55 per cent) is owned and controlled by private woodlot owners upon whom Lahey chose not to impose regulations, but rather to respect their property rights to make their own decisions.

Approximately 15 per cent of forest land is owned by large forestry companies. The remaining 30 per cent is Crown Land, owned by the public and managed by the Province, which leases much of it to companies such as Northern Pulp, Port Hawkesbury Paper, and the WestFor consortium on the former Bowater Mersey lands.

Environmentalist Raymond Plourde, Wilderness Coordinator with the Ecology Action Center (EAC), struggled with mixed feelings after the release of the Lahey report. While Plourde applauds its thrust to reduce clearcutting on Crown Lands and to protect old-growth forests (which EAC and newer groups such as the Healthy Forest Coalition have publicly campaigned for through petitions and mock Forest Funerals), he was disappointed with other recommendations.

“No regulations on private lands?” questioned Plourde. “That’s something Mr. Lahey acknowledged government has the authority to do but they are not going to do, and it’s disappointing because it can shift the (clearcutting) damage more greatly to private landowners”.

But while that was a disappointment, Plourde said he was, “absolutely gobsmacked — shocked — that he is recommending to allow spraying on Crown lands again after the last review basically stopped that.” Plourde predicted that this recommendation will not go over well with Nova Scotians, “who are sick of glyphosate spraying in this province.”

And we could be paying for it, literally, if the government agrees.

Recommendation 14 of the Lahey report says, “to ensure the productivity of plantations and high-production forestry where it is conducted in accordance with ecological forestry, licensees on Crown lands should have access to public funds for the use of herbicides to control competing species and as a density control measure within plantations.”

Get ready for another fight. That controversial recommendation appears to back up Bill Lahey’s assertion his report is “not anti-forestry.”

And the report also completely side-stepped the controversial question of biomass production — whether truckloads of trees should be chopped, chipped, and burned daily to produce electricity. Questioned about that, Lahey said he chose to review harvesting methods rather than the final use for the resource.

And, a blast from the past — first recommended in 2009 by the expert panel of Bancroft, Crossland, and Porter to what was then called the Department of Natural Resources — is back. In 2018, Lahey recommends banning full-tree harvesting as part of clearcutting on Crown and private lands, “with limited exceptions, if any, such as to permit use in salvage operations.”

The devil, as we are repeatedly reminded in this contentious area, is in the details and definitions of what constitutes “sustainable” forestry practices.

The Lahey report says, “the Department of Natural Resources (recently renamed Lands and Forests) must deeply and pervasively embrace a culture of transparency and accountability. It must dramatically increase its reliance on science…that is needed to move Nova Scotia in the direction of ecological forestry with healthy forests and thriving forest-based industries.”

Bill Lahey says he believes his report has “a fighting chance” to be implemented by politicians.

After two major forestry reports in the past decade, it’s time for Nova Scotians to find out.