You are here: Home / Featured / The Yarmouth ferry is going to Bar Harbor — a little late, and at some unknown cost… 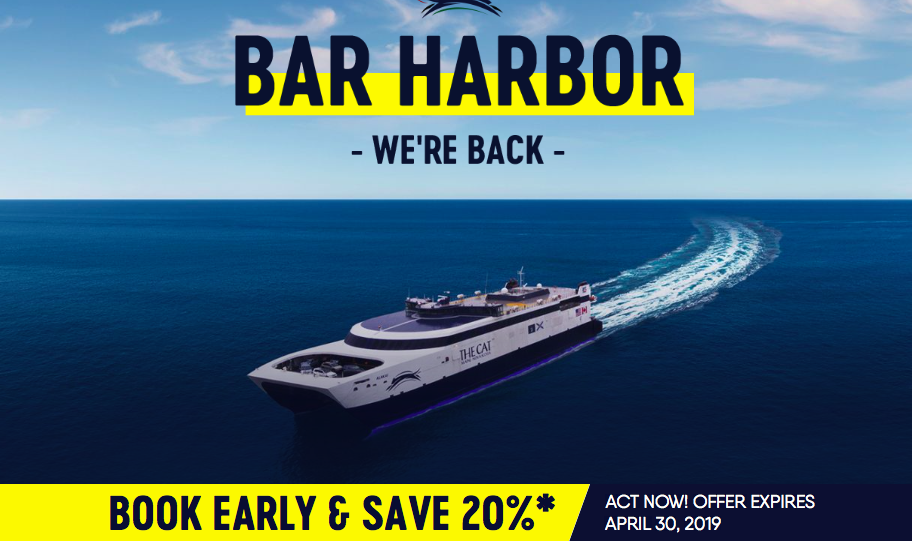 Bay Ferries has announced that the Alakai ferry — dubbed “The Cat” — will begin sailing between Yarmouth and Bar Harbor, Maine starting June 21. On its website, the company says that date is “subject to change” because of the renovations required to the ferry terminal in Maine.

Documents filed with the town’s Planning Department estimate the renovations will cost between $3.25 and $3.75 million USD, (approaching $5 million CDN). The proposed renovations include a new loading dock, repairs to the pier and the demolition and rebuild of the Customs area to accommodate modern screening and security procedures. Nova Scotia’s Minister of Transportation, Infrastructure and Renewal, Lloyd Hines, has confirmed the province will pay for the renovations and has engaged consultant Bruce Tuck as a monitor.

Hines has also confirmed Nova Scotia taxpayers will pay the salaries of US Border and Customs agents “as a cost of doing business” but neither the province nor the company have been willing to provide an estimate of that cost.

At the time of this writing, neither Bay Ferries nor the Bar Harbor Town Manager has returned calls from the Halifax Examiner seeking confirmation and clarification regarding the terms of the lease for the ferry terminal. A five-year lease was signed yesterday between the town, which recently bought the building, and Atlantic Fleet Services (a Bay Ferries’ affiliate), reports a Maine weekly newspaper called the Mount Desert Islander.

The Islander newspaper quotes a Feb.19 statement from Bay Ferries saying “the base term of the lease is five years with guaranteed minimum annual rent of $264,000 CDN (based on a $1.32 exchange rate).”

Last year the ferry carried more than 50,000 passengers between Yarmouth and Portland, Maine — an increase over previous summers. Bay Ferries was paid $13,964,393 to operate the service. How much was paid as a management fee is undisclosed and the subject of a recent court case initiated by PC leader Tim Houston. The operating subsidy in the previous year was $10,248,421.

The move to Bar Harbor will reduce the ferry travel time (and hopefully the fuel costs) by two hours. It will be a 3.5 hour trip with the boat leaving Yarmouth at 9:30 am. The season will be at least two weeks shorter due to the renovations. As an incentive to travellers, Bay Ferries is offering a 20 per cent discount for those who book reservations before April 30. The round trip fare quoted today for two Nova Scotia adult residents, with a vehicle, including the 20% discount is $403.20 USD (US dollars).

Don’t let the fact you have already paid for some of the ride spoil the trip.