You are here: Home / Commentary / The Yarmouth ferry: a review

I took the ferry from Yarmouth to Portland Wednesday.

The boat departs at 8:30am, but you’re required to be there by 7:30am, so realistically that means overnighting in Yarmouth. I had hoped to explore Yarmouth a bit Tuesday, but didn’t arrive until 7:30pm, so after checking in at the Lakelawn Hotel, I only had time to walk Main Street and have dinner and drinks at Rudder’s Brewpub on the waterfront (recommended!).

After arriving at the ferry terminal Wednesday morning, I was queued up with 80 or 90 other cars and was slowly marshalled onto the ferry. Almost all of the other cars had American licence plates. 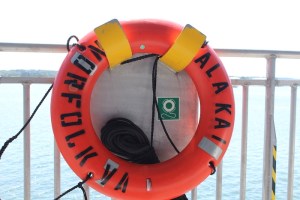 The boat is the Alakai, built for a Hawaiian ferry service that went belly-up and was subsequently bought by the US Navy, which ran it as a troop and evacuee transport in Haiti and elsewhere in Latin America. Later, it sat tied up for a couple of years at a dock at Lambert’s Point in Norfolk, Virginia. The Navy is now leasing it to Bay Ferries for the Yarmouth–Portland run. Weirdly, officially the boat maintains the “Alakai” name and home port of Norfolk.

About 200 passengers were on the ferry Wednesday, most of whom were older than my 53 years, but also including a few dozen younger people and families. The boat seemed at about one-third capacity. 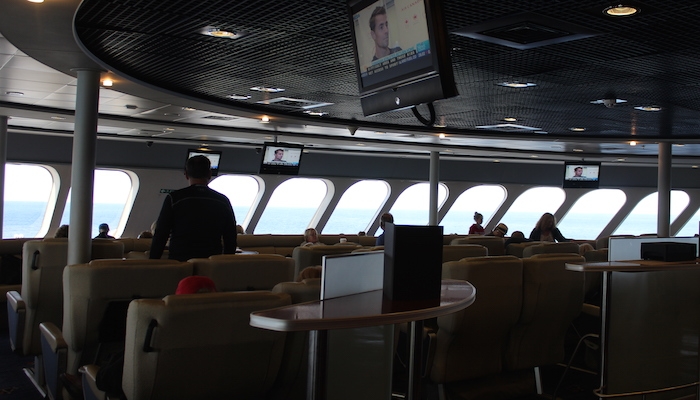 The foredeck of the Alakai. Photo: Halifax Examiner

The foredeck is completely enclosed, and every table and seat was occupied. The Forchu Lounge sells only Nova Scotian beer (Boxing Rock, Hell Bay, Garrison, and Propeller; US$6 for a 16oz draft or US$7 for a bottle) and wine (selections from Jost, Avondale, Gaspereau, L’Acadie, Sainte Famille, and Meréchal Foch;  most at US$10/ glass). Cocktails are more expensive, ranging up to $15 for a White Russian, and $7 for a single one ounce shot of anything. 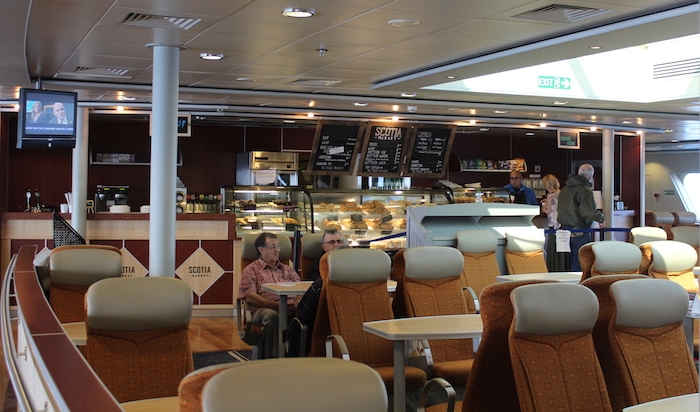 The mid deck is dubbed the “Scotia Market,” which consists of a snack bar on one side and souvenir shop on the other. In between are seats and tables, and screaming TVs hanging from the ceiling. One side is dedicated to children; besides animated children’s movies, I didn’t see any programming specifically dedicated to children, but I was thankful they were contained in one easily avoided section of the boat.

The snack bar looked decent enough. A panini or wrap is US$8, bagel US$6, cheesecake US$4, drip coffee US$2. 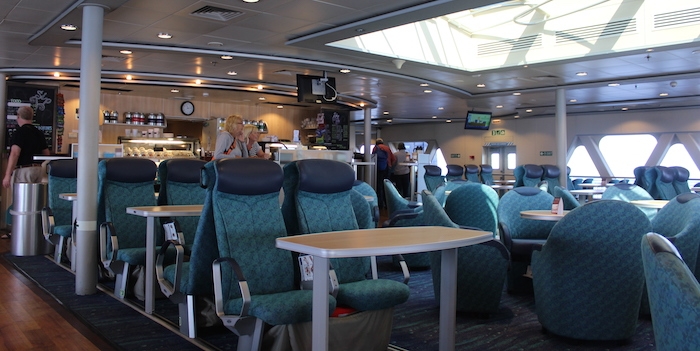 The aft deck on the Alakai. Photo: Halifax Examiner

The aft deck is quiet and comfortable. This is where I spent the bulk of the trip. There’s an espresso bar that also sells teas, muffins, salads, and gelato. I asked the gregarious young woman working at the espresso bar how she liked her job. “I love it!” she said. “My last job was just in a drug store. Now I get to look at the ocean all day, and I meet lots of interesting people.” She told me she lives in Yarmouth, and this was her last day on the job, as she’s going to Acadia University in the fall. She seemed sad to be leaving.

Weirdly, there’s no wifi available to passengers on the Alakai, but passengers can access the internet at three computers on the foredeck for no cost. Reception via Yarmouth’s cell towers lasted a surprising distance out to sea (about a half-hour); after that, nothing. I was grateful, actually; this was the beginning of my vacation, and it was nice to be forced to unplug. I sat and read and talked, took a nap, enjoyed the gentle rocking of the boat on the sea. It was relaxing.

The boat was meticulously clean and well-staffed, and that staff was efficient and helpful. While clean, the washrooms were a bit cramped, and I wondered if they could handle a full capacity passenger complement. 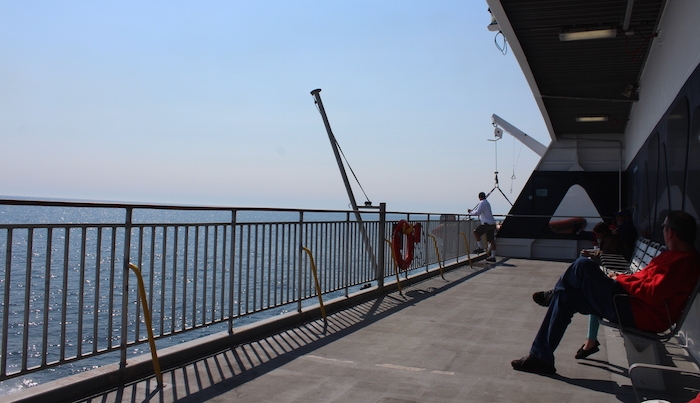 The rear deck of the Alakai. Photo: Halifax Examiner

Smokers are limited to a small side deck with no seating. There’s a second side deck, also without seating, and a larger rear deck, with a single row of chairs. The boat travels at a steady 35 knots, and so there’s quite a wake. 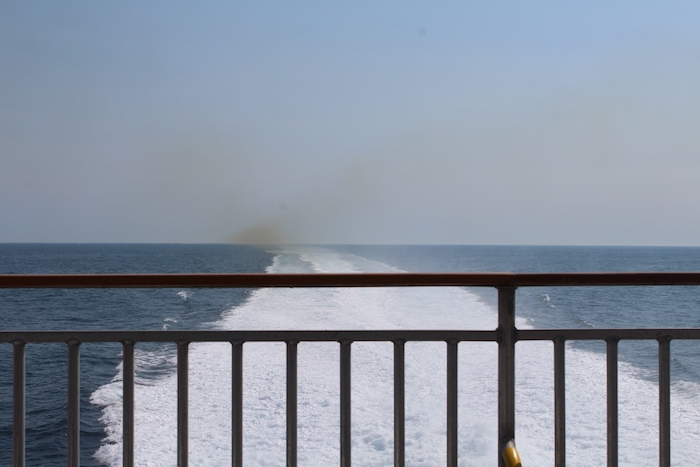 The Alakai is an environmental disaster; diesel exhaust is belched out from two giant pipes and collects to the rear of the boat, a black cloud following all along for the entire six hours of the passage. Undoubtedly, there’d be far less carbon released into the atmosphere if all the cars simply drove around. (I know, we’re not supposed to talk about the climate change effects of tourism; my bad.) 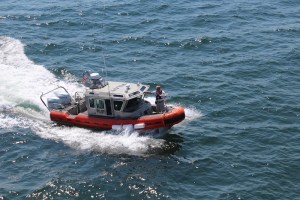 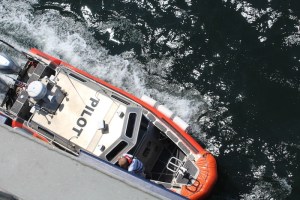 A pilot prepares to board the Yarmouth ferry in order to navigate the boat into Portland Harbor. Photo: Halifax Examiner 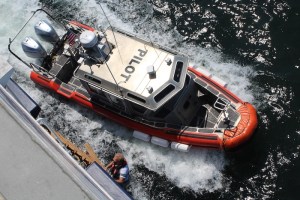 Pulling into Portland was interesting. A half hour out from port, the pilot boat pulled alongside the Alakai and the pilot jumped on a rope ladder extended for him.

Through Portland Harbor, we passed a lighthouse and various old military fortifications. There seems to be far more small craft activity than in Halifax.

Exiting the ferry and passing through customs took about half an hour.

The question we are all wrangling with is: Is the ferry worth it?

From a simple transportation perspective, the answer is an emphatic No.

In terms of time, it took three hours or so to drive from Halifax to Yarmouth, an hour waiting to board, six hours for the ferry ride, and a half-hour to disembark, for a total of 10-and-a-half hours in transit. Realistically, however, one must overnight in Yarmouth (that’d also be true for the Portland–Yarmouth journey), so add in another eight hours at least; call the total 19 hours. Simply driving from Halifax to Portland through New Brunswick and northern Maine takes about nine hours, if you factor in a half-hour or so at the international crossing in Calais.

Same goes financially. The mid-week ferry reservation for two travelling with a small car with Nova Scotia plates cost CN$548.21 (including taxes, at the exchange rate the day I booked), and a night at the Lakelawn was CN$173.55 (taxes included). I could’ve driven around for the cost of two tanks of gas, maybe 60 dollars.

Of course, there’s an additional travel element that is immeasurable: Taking the ferry across the Gulf of Maine is relaxing, and a cool thing to do.

The ferry service, however, isn’t intended as a mode of transport for Haligonians travelling to the States. Rather, the justification of the public subsidy to the ferry is that it will encourage Americans to travel to Nova Scotia as tourists, and that they’ll spend so much money that the economic impact of the tourism will more than outweigh the subsidy. Arguably, from one perspective the ferry doesn’t even have to do that: the economy in southern Nova Scotia is struggling, and a public subsidy for the ferry with the idea that it will help buoy those communities can be justified whether or not the economic impact numbers surpass the subsidy.

So how is the ferry as a tourism experience?

I was impressed with the quality of offerings and service on the Alakai — Bay Ferries has close to the best product it can possibly provide, given the constraints of time and passenger profile. I really can’t fault the company.

But besides the ferry ride itself — besides the relaxing and cool journey across the Gulf of Maine, and the quality service and relaxation on the boat — is the experience on either side of the journey. And I don’t know how well this translates into a positive tourist experience or even much help for the struggling communities.

The Lakelawn was booked solid, and the fellow at the desk said all the other hotels in town were full as well — this at mid-week, so obviously the hotel business is profiting from the ferry. I wonder what happens on the weekends. And there were a lot of people walking around downtown Yarmouth Tuesday night. Maybe before I arrived they were spending a lot of money in shops, but by 8pm or so, all the tourists seemed to be in bed, looking in closed shop windows, or at Rudder’s, where the hostess told us the wait for a table was an hour (we had a drink on the patio and the wait turned out to be just a half-hour).

Wednesday morning, there were a few shops open — I wondered aloud if tourists actually stop by the open ceramics store on their way to a 7:30am ferry lineup, but maybe they do. I know that we stopped in a bakery two blocks from the ferry dock, and were the first customers at 7am. Two more people came in at 7:15, but that was it. No way did four customers buy enough to cover the server’s pay.

For Americans coming into Yarmouth, that means getting to a hotel around 10:30pm or so (Tuesday’s night ferry was an hour late, so it was more like 11:30pm). I don’t pretend to be representative of American tourists, but for myself, that’s just too late to go trinket shopping, although I might get a nightcap before heading to bed.

The view of Shelburne Harbour from the deck of The Sea Dog restaurant/ bar. Photo: Halifax Examiner

I don’t know what tourists do after they land in Yarmouth. Maybe they stay there another night  — there seems to be new energy to the town, and there’s reason to stick around. Or maybe the tourists explore Shelburne or the French shore.

My limited observation, however, is that besides in Yarmouth itself, there’s not much to keep tourists around the area. A few weeks ago I spent the night in Shelburne, and The Sea Dog —the one and only waterfront restaurant/bar — closed at 9pm on a Saturday night; I felt like I was rushing the staff. Walking around town afterwards was like walking through a ghost town, albeit a ghost town with lots of dog walkers. The waterfront coffee shop wasn’t open when I left town at 9am Sunday. I have no desire to return to Shelburne.

Tuesday, I found the French shore fascinatingly beautiful, but likewise (with a few exceptions) it seemed woefully slim of restaurants or even places to stop and walk along the Bay of Fundy.

I may be entirely wrong. Like I said, I don’t think I’m representative of anyone except cynical journalists from Halifax. It’d be nice to get some solid information about the real habits of American tourists who take the Alakai, where they stay, what they do, how they spend their money. It astounds me that we’ve made a 10-year, $100-million commitment to the ferry without having this basic data.

I don’t have a knee-jerk reaction against funding the ferry. Maybe it can be part of an overall tourism development plan for southern Nova Scotia, but it is not a silver bullet. Attracting, and more important, retaining tourists will require collecting real data on their habits, and focusing the industry around their desires.

I wonder, though, if there aren’t ways of spending the same amount of money that might result in better return for the people we’re trying to help. I’ve mentioned before that providing low-cost or even free high-speed internet for residents of Yarmouth could result in the much-vaunted entrepreneurship and better-paying jobs for more people than tourism can provide. No doubt there are other ways to spend the money with similar positive results.

Why limit the discussion to funding a ferry?