You are here: Home / Featured / The Unique Solution: Nearly the entire $5.6 million invested by Nova Scotia Business, Inc. has evaporated 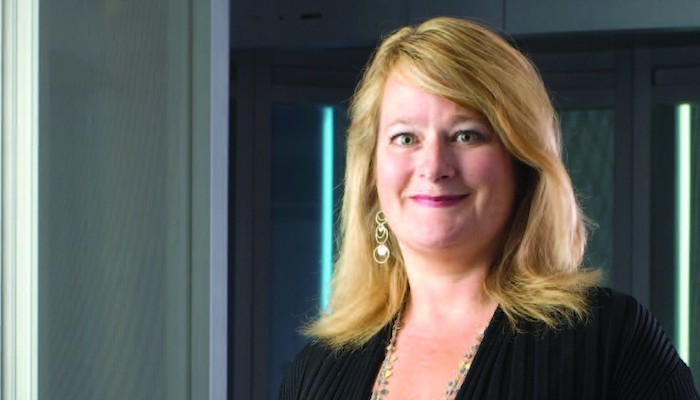 Soon Shaw was being recognized for her business accuum. In 2000, the accounting firm Ernst & Young named her the “Young Entrepreneur of the Year” in Atlantic Canada. In 2003, she had 33 employees and was a recipient of Canada’s Top 40 Under 40 award. The following year, the Canadian Advanced Technology Alliance recognized Shaw as the Top Canadian Woman in Hi-Tech.

With that recognition came access to government money—taxpayer money. Shaw had created a number of interconnected companies—including Unique Solutions Design, Unique Systems Design, Virtually Yours, Unique Patterns Design, and Softwear Design—which were attracting the attention of ACOA, the federal economic development agency. Between 2000 and 2004, ACOA extended a million dollars in loans to help the company expand and gave the company one outright grant of $99,900, to hire a technical consultant. 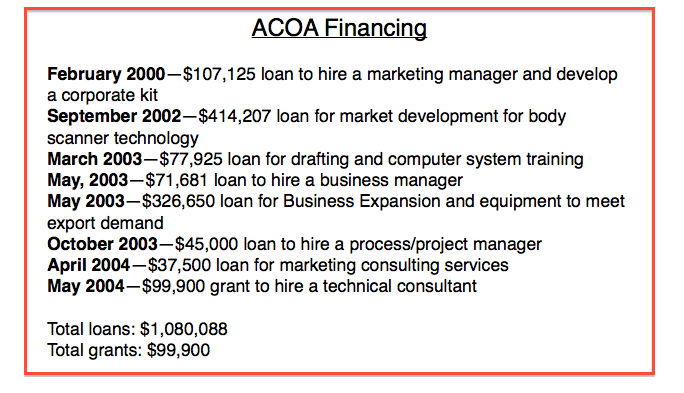 That expansion was related to a new technology the company had developed. As Shaw explained, “In 2002, Unique Solutions introduced the proprietary UniqueScan body scanning system (known as the Intellifit® Plus) using white light technology. In addition to over 200,000 points of body measurement, the Intellifit Plus can report BMI, height, weight, and health risk factors.”

The idea was that with specific body measurements, Unique Solutions customers could find clothing best suited to their body size and dimensions, and Unique Solutions hoped to develop a secondary market for people concerned about their health.

NSBI gets on board

To that end, Unique Solutions went looking for still more government financing and in September 2003 received a term loan of $347,000 from NSBI. Two years later, in May, 2005, Unique Solutions’ relationship with NSBI was ratcheted up when NSBI converted the 2003 loan into a convertible debenture—an interest-bearing loan that could at a later date be converted to an equity stake in the company—and extended a second convertible debenture of $350,000.

As is typical when NSBI owns a potential equity stake in a company, NSBI acquired a seat on Unique Solutions’ board of directors. A year later, in July of 2006, NSBI invested a cool $2 million in Unique Solutions, again in the form of a convertible debenture. Another $280,000 convertible debenture came in 2008, and then a second $2 million in March of 2009. That June, all the financial instruments were converted to stock.

In total, NSBI had invested $5.6 million into the company.

Unique Solutions did not respond to a request for comment for this article. 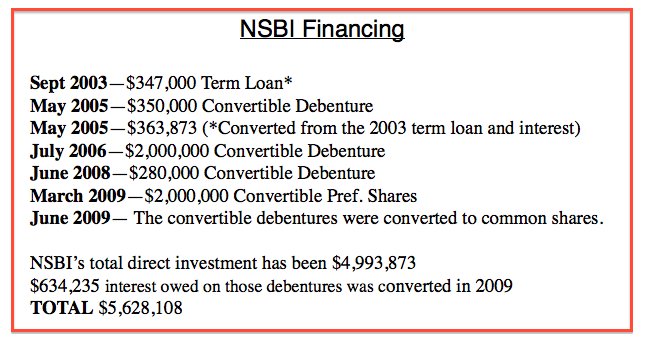 Unique CEDC was the most successful CEDIF to date, raising nearly $2 million from 142 investors in its first offering.

Unique CEDC was so successful that in 2008 Shaw was invited to address the CEDIF Annual General Meeting at the Museum of Industry in Stellarton. Shaw, explained a recap of the meeting, “discussed how Unique CEDC came to raise almost $2 million (2006) which it invested in Unique Solutions Design Ltd. She also outlined how the Company has evolved from a custom pattern maker into a ‘tech company,’ using software and the 3D body scanner to collect personalized data and body measurement information that translates into customized products and services.”

At one time, the PowerPoint presentation Shaw delivered at the meeting was publicized on the provincial government’s website, but that presentation has since been deleted at the request of Unique Solutions, says Chris Payne, the government employee tasked with overseeing CEDIFs.

As outlined in the presentation, the financial plan showed the company had already raised over $14 million in investment. A quarter of that investment—$3.6 million from NSBI—was taxpayer money. (Another $2 million would come from NSBI a few months later.)

Shaw told the group that she hoped Unique Solutions would generate $18 million in revenue by 2008. 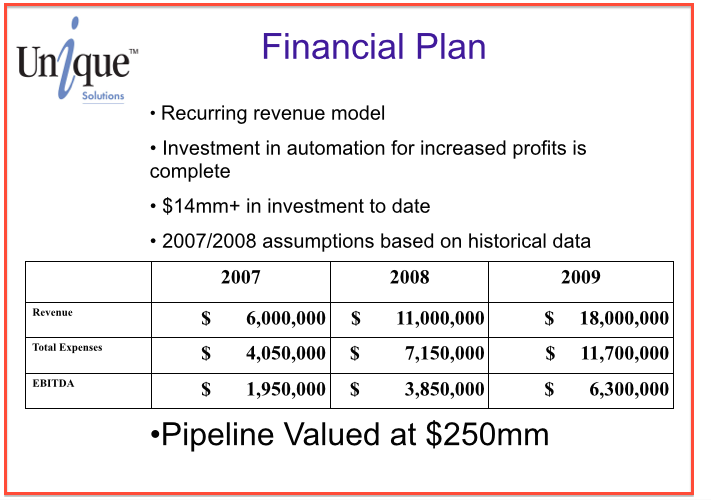 But after Shaw celebrated the success of her CEDIF in Stellarton, Unique CEDC failed to comply with regulations of the Nova Scotia Security Commission. Specifically, Unique CEDC failed to file its 2008 year-end financial statement, its 2009 semi-annual statement, and its 2009 year-end statement with the regulator by the legal deadlines. In July 2010, the NSSC granted Unique CEDC an extension to the already-passed filing deadlines, allowing Unique CEDC to submit the required documents by September 1, 2010. But Unique CEDC missed that extended deadline as well, and the documents were not filed until November 21, 2011, over a year late.

Last Friday, Michael Deturbide, chair of the Securities Commission, assessed Unique CEDC a $2,500 administrative penalty and $750 in costs for its failure.

“Disclosure is the cornerstone of the securities regulatory regime,” said Securities Commission lawyer Stephanie Atkinson after the ruling.

“Whether they’re a CEDIF or not, frankly, companies who are either publicly traded or publicly offered and are not filing their disclosure—from our perspective, that’s a huge transgression,” added NSSC’s Heidi Schedler.

But despite the lackadaisical reporting of its CEDIF fundraising arm, Unique Solutions was moving forward with its expansion plans.

Unique Solutions had raised $2 million through Unique CEDC, and in March 2009, NSBI made its final $2 million investment. With that money, Unique Solutions bought Intellifit, a Pennsylvania company that used a different technology for its body scans—low-power radio waves, such as is used in airport body scanners. This would allow people to have a body scan while fully clothed.

The company was poised to enter the US market in a big way.

With the new Intelilift technology in hand, in 2010 Unique Solutions opened its first kiosk, dubbed “My Best Fit,” in the King of Prussia Mall, the largest mall in the United States, not far from Intellifit’s office in Pennsylvania. 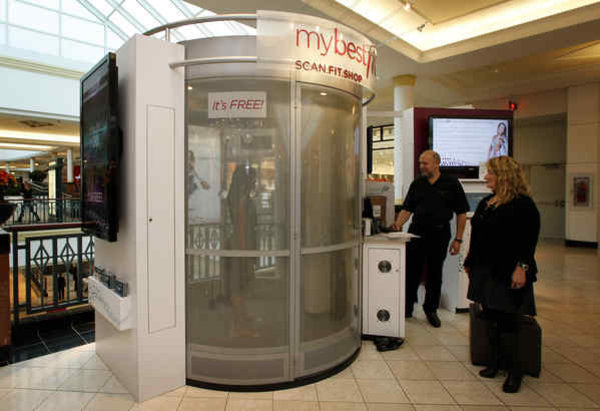 And still more money was on the way.

Economic and Rural Development and Tourism Minister Percy Paris congratulated a company with an office in Dartmouth today, July 27, on attracting $30 million in new funding.

The Northwater investment would allow Unique Solutions to open 70 more kiosks in malls across the US, the first stage towards an expected 300 malls. The kiosks were rebranded as Me-Ality.

The Unique Solutions–Northwater release didn’t specify the dollar value of the “first tranche” of the investment but, unlike Paris’ letter, it made clear that the entire $30 million was not being delivered at that time.

Regardless, through 2012 and into 2013, Unique went on to open Me-Ality kiosks in dozens of malls.

But then, suddenly, the kiosks disappeared.

Most if not all of the Me-Ality kiosks were placed in malls owned by the Simon Property Group, which owns hundreds of malls in the US. The Examiner has been unable to find a single Me-Ality mall kiosk still in operation.

Contacted by the Examiner, a spokesperson for the King of Prussia Mall said the MeAlity kiosk “left over a year ago.” The woman who answered the phone at the information desk in the South Shore Plaza in Boston said that Me-Ality “left a while ago, a long while ago.” Similarly, Me-Ality phones have been disconnected at the Chesterfield Mall in Missouri, Westfield MainPlace Mall in Santa Ana, California, and Walt Whitman Shops in Huntington, New York. The phone number for two Me-Ality mall kiosks in New Jersey have been reassigned to people.

Several commenters on the glassdoor.com site, where employees and former employees can anonymously review their employers, say that the Me-Ality kiosks were abruptly closed.

“Called an hour before work and said station is closed,” wrote one commenter. “Over 75 stations closed and hundreds of people out of work. Then a week later had segment on [Good Morning America] in Bloomingdales about how great they are.”

“They laid me and my whole team and 10 other stores off with no notice,” said another.

Neither Simon Property Group nor Northwater Capital have responded to requests for comment. But by all appearances, Northwater has declined to further finance Unique Solutions—the “first tranche” of the investment was also the last, and the rest of the $30 million never arrived.

In a bid to survive, the company has had to repurpose its kiosks. In April, 2013, five Me-Ality kiosks were opened in Bloomingdales stores—including “the 59th Street flagship in Manhattan, Roosevelt Field Mall (N.Y.), Chevy Chase (Md.), Santa Monica Place (Calif.) and South Coast Plaza (Calif.).”

On its FAQ page, Unique Solutions still lists Me-Ality kiosks at the two California Bloomingdales stores. However, the phone number the page lists for the Santa Monica location has been disconnected. There has been no answer or voice mail option at the number given for there South Coast Plaza kiosk.

The search was not exhaustive, but the Examiner has been unable to find even one Me-Ality kiosk still in operation.

With the apparent closure of all the Me-Ality kiosks, where does that leave Unique Solutions?

An indication of the financial health of the company is revealed in a document filed at the Nova Scotia Securities Commission and reviewed by the Examiner. 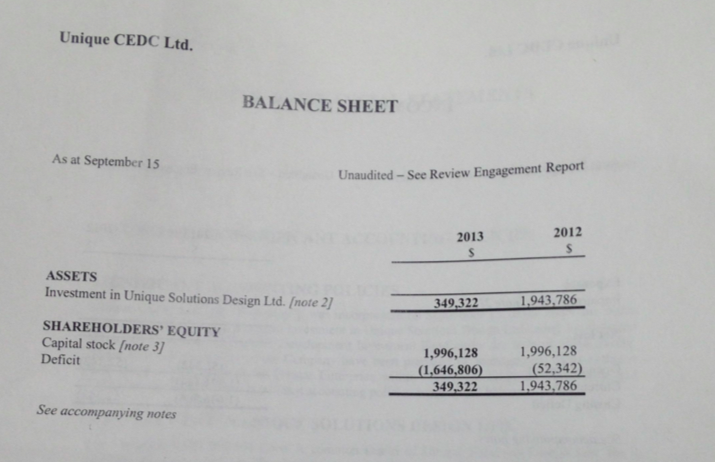 This page of the 2013 financial report filed with the Nova Scotia Security Commission shows that its investment in Unique Solutions has been devalued by over $1.6 million.

What about NSBI’s investment? What is the $5.6 million in taxpayer money invested in Unique Solutions between 2005 and 2009 worth today?

The $2 million NSBI invested in Unique Solutions in March 2009 was in the form of preferred shares, which have priority over common commons. The other $3.6 million in NSBI’s investment was converted to common shares in June 2009.

NSBI reviews its equity portfolio twice a year and regularly writes down investments that have lost value. But, citing company confidentiality, NSBI won’t reveal the current value of any of its particular equity investments, including the value of the $5.6 million it invested in Unique Solutions.

“Despite the priority, the preferred shares could and should have been written down by some factor as they are still equity,” said an investment counsellor contacted by the Examiner. “The bottom line is NSBI should have written down their total investment by something equivalent to the write-down taken by the CEDIF.”

Taxpayers appear to have lost about $4.6 million, and no one told them.