Wednesday afternoon at 3:59 PM an email landed in my inbox. It was from Nova Scotia Environment and it was short, even terse:

Environment Minister Gordon Wilson has issued a ministerial order to govern how Northern Pulp must conduct its orderly shutdown of the mill, today, Jan. 29. The ministerial order and terms and conditions are available at novascotia.ca/nse/issues/northern-pulp.asp.

The 38-page ministerial order was issued just hours before Northern Pulp’s current industrial approval was to expire, after which it would have become illegal for the pulp mill in Pictou County to operate any part of the facility.

In a telephone interview, NSE spokesperson Rachel Boomer told the Halifax Examiner that the order was issued to replace the expiring industrial approval. Without it, the mill would have been operating illegally and contravening the Environment Act as it winterizes and goes into hibernation in coming months.

In a press release issued Thursday, Northern Pulp acknowledged the ministerial order, which allows it a “short-term extension” to use Boat Harbour “to ensure safe and environmentally sound hibernation:”

The ministerial order contains 102 directives, but makes no mention of the Boat Harbour Act, which comes into effect today and legislates that Northern Pulp must stop sending effluent into Boat Harbour.

However, as the Halifax Examiner reported here, on January 21, Premier Stephen McNeil told journalists that Paper Excellence / Northern Pulp had asked Nova Scotia Environment for permission to run the mill’s power boiler until the end of April, so that it would be able to restart the mill if it eventually receives environmental approval to build a new effluent treatment facility.

The premier stated that the liquid flowing from the mill after January 31 would not constitute “new effluent” and thus not contravene the Boat Harbour Act.

But at the time, Pictou Landing First Nation legal counsel Brian Hebert said that wastewater from the power boiler and leachate that would be flowing from the mill were both included in the definition of “effluent” within the Boat Harbour Act. Said Hebert:

… the province has in effect decided that it is not going to fully enforce the Boat Harbour Act. There will be partial enforcement of the Boat Harbour Act from February 1, 2020 to April 30, 2020. During that time there will be no pulping in the mill (this has already stopped) and so no waste from the pulping process will be entering Boat Harbour after January 31, 2020, only leachate from the runoff water at the mill site and wastewater from the power boiler. After April 30, 2020 we understand that the Act will be fully enforced — no pulp waste, no leachate, and no power boiler water.

Wednesday’s ministerial order confirms Hebert’s analysis of the partial enforcement of the Boat Harbour Act, stating that the mill “shall cease discharge of all wastewater to the Boat Harbour Effluent Treatment Facility (BHETF) by no later than April 30th, 2020.”

The ministerial order makes it clear that Nova Scotia Environment isn’t letting Northern Pulp off the hook on its reporting obligations, just because the mill is going into hibernation. It also demands information so basic and important, one might think the government wouldn’t need to issue directives to obtain it.

Northern Pulp is expected to “measure or estimate annual emissions for 2019 and 2020 (for the days the mill was operated) of total particulate matter and sulphur dioxide” from the power boiler, recovery boiler, smelt dissolving tank and lime kiln, and submit annual emissions reports for these periods to NSE by May 30, 2020.

By May 29, 2020, Northern Pulp is to mark and secure the area where it has disposed of asbestos.

At its own expense, Northern Pulp is also to take out a hefty insurance policy from “financially sound insurers licensed to carry on business in Canada” to provide “coverage for all environmental risks associated with the operation of the Facility.”

The insurance policy is to have “a limit of liability of not less than $10 million per occurrence” and make provisions for “gradual and sudden pollution coverage for all insured perils” and “government-ordered clean up expenses coverage.”

The ministerial order also strictly limits what Northern Pulp can discharge through its pipe after today, stating that it:

… is strictly prohibited from discharging any domestic sewage from the office buildings or any other part of the Facility (with the exception of showers and handwashing required for Occupational Health and Safety), any process water, dangerous good or waste dangerous good to the BHETF, including but not limited to black liquor, white liquor and/or green liquor…

An industry insider who wishes to remain anonymous suggested to the Examiner that the strict conditions on what the mill can discharge in the pipeline may be a government attempt “to appease some of the Pictou Landing First Nation concerns about what deleterious substances could find their way into Boat Harbour after January 31st.”

Northern Pulp is instructed to maintain the “Mi’kmaq Communication Plan” for sharing information with PLFN “on environmental or any other issues.” 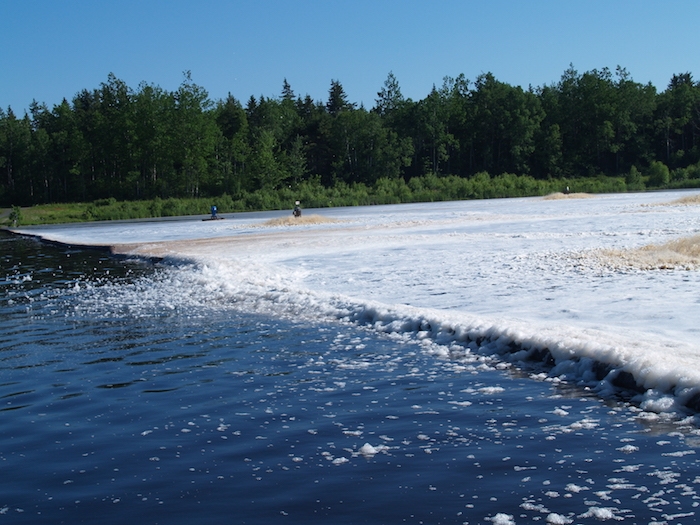 Mill effluent goes from aeration pond into Boat Harbour lagoon, where it spends another 20 or 30 days stabilizing before going into the Northumberland Strait. Photo: Joan Baxter

Wastewater quantities are also to be reduced and closely monitored. The flow of wastewater at Point C, which is where the effluent flows from the aeration basin into the Boat Harbour lagoon, is to be restricted to a “maximum of 35,000 cubic metres [35 million litres] per day.” 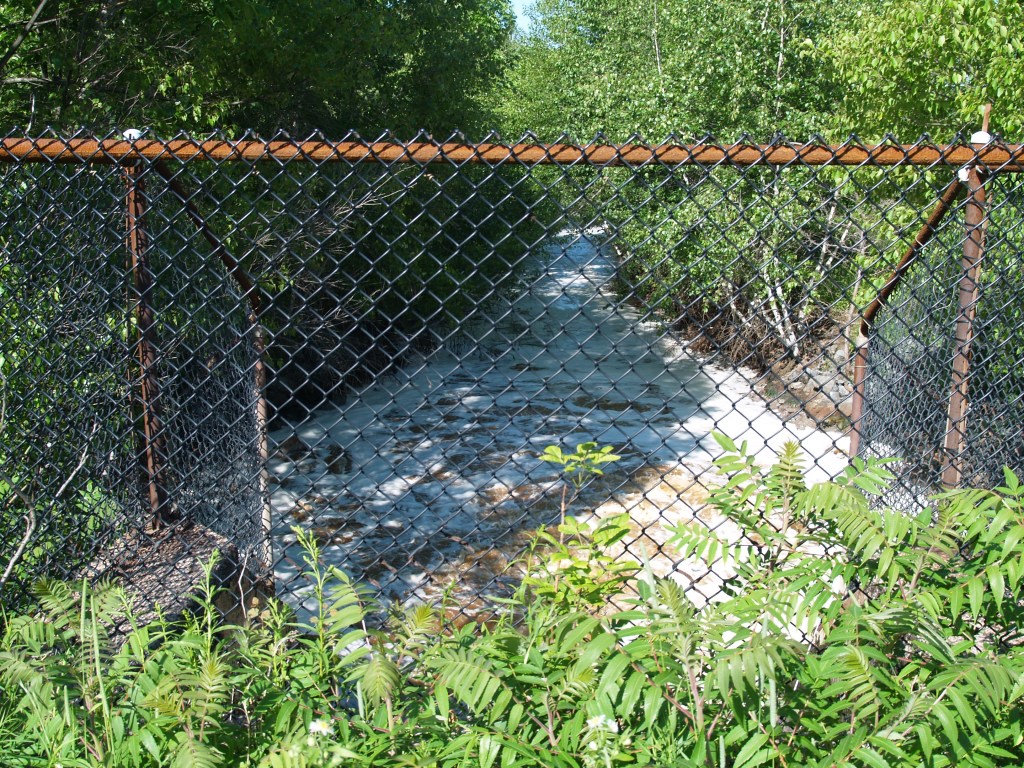 The end of the effluent pipeline at Point A. Photo: Joan Baxter

The 2015 -2020 industrial approval imposed rules about effluent monitoring and reporting at Point A, where the mill effluent flows into a concrete channel at the end of the actual pipe, which carries effluent under the mouth of the East River to Indian Cross Point, and then underground for another kilometre or so before entering a concrete channel. It said that:

The Approval Holder shall monitor flow at Point A, the end of the effluent transmission pipe, on a continuous basis. This data shall be recorded daily and tabulated monthly.

The Approval Holder shall operate and maintain real time flow monitoring equipment at the end of the effluent transmission pipeline which is designed to immediately notify the Approval Holder in the event of a total loss of flow or a reduction of flow below normal operating conditions.

If Northern Pulp had been obeying these rules, then it seems odd that the ministerial order now states that it must come up with a plan to measure the wastewater at Point A, and install a system to accomplish this. But it does just that, stating that Northern Pulp:

… shall submit to the Department [of Environment], for review and approval, by no later than February 15, 2020, a plan for measurement of flow at Point A.

…shall install or confirm wastewater flow measuring is in place at Point A by no later than February 29, 2020.

There have certainly been indications that Northern Pulp wasn’t always doing the “real time flow monitoring” at the end of its effluent pipe, which was required by its industrial approval. 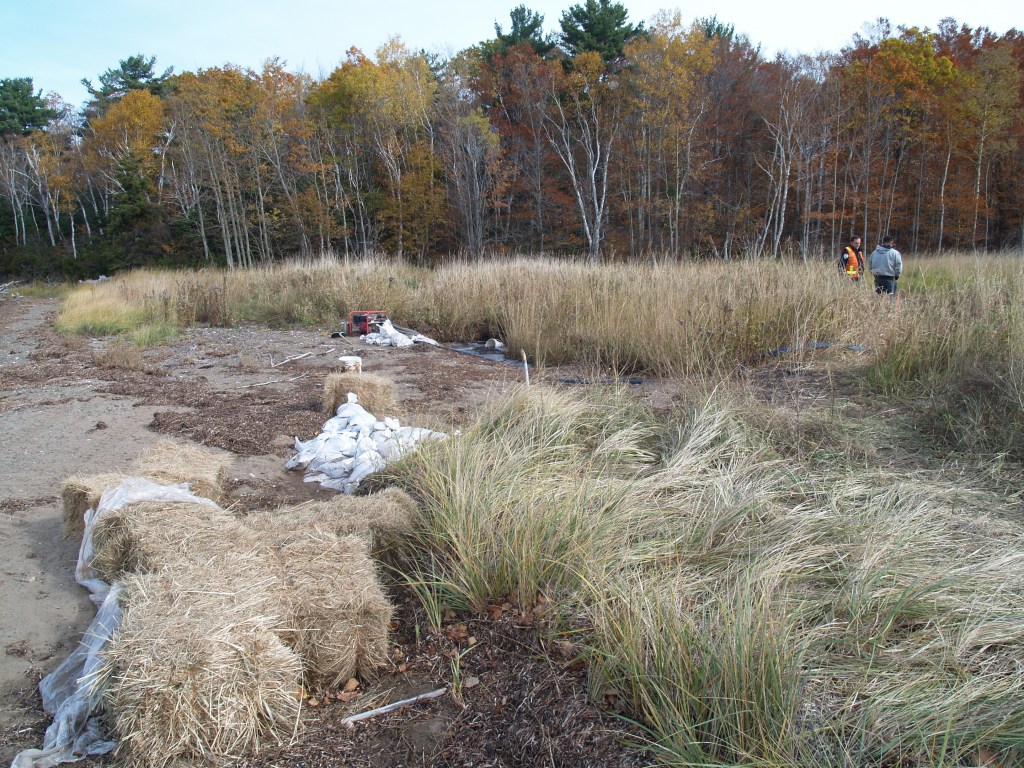 Pipeline leaks into a swamp were being pumped out and overseen by a Nova Scotia Department of Environment compliance officer in this October 2018 photo. Photo: Joan Baxter

As the Halifax Examine reported here, in October 2018, the pipeline sprung a large leak near where it comes ashore at the mouth of the East River. The leak was discovered, as were several previous leaks – including the massive one in 2014 that spewed 47 million litres of toxic effluent onto the sacred Mi’kmaq burial grounds at Indian Cross Point – by William Palmer, a nearby resident who walks his dog in the area.

If Northern Pulp had had “real time flow monitoring equipment at the end of the effluent transmission pipeline,” why did mill staff learn of the leak from Palmer, hours after it happened?

We don’t yet know what caused the 2018 pipeline leak; NSE spokesperson Rachel Boomer said in an email that the investigation is still ongoing.

At the rate that investigation is going, it could be that by the time it’s finally completed, there will be no more pipeline.

The ministerial order states that Northern Pipe has to submit to the Nova Scotia Department of Environment a decommissioning plan and schedule for the effluent pipeline – as well as the open ditches, settling basin and aeration basin – by August 2, 2020.

The ministerial order doesn’t foresee or make provision for any part of the mill to operate after that date.

The pulp industry insider (who requests anonymity) today sent the Halifax Examiner some additional observations about the ministerial order. In his email, he said he was concerned about Section 29 of the order, which states that Northern Pulp:

He points out that Premier McNeil is saying this pipe sealing will be done May 1, 2020. This appears to contradict the deadline in the ministerial order. Writes the industry insider:

[The] August 1st deadline is only for the plan [for the pipe decommissioning] and all surface runoff still goes to the pipeline, so potentially millions of litres a day of runoff and leachate will still be entering Boat Harbour after May 1st, and indefinitely as well, as August 1st is only for the plan, not cessation of flow? They would need a large lagoon built on site, as well as a treatment plant to handle this runoff in the future until the complete site is remediated to the bedrock basically, as capping will not really work effectively for mercury.

He is referring to the mercury in “secure landfills” adjacent to the Canso Chemicals site beside the pulp mill, and in the bedrock underneath the former chlor-alkali plant, on which the Halifax Examiner reported here and here.

The industry expert also has concerns about how runoff from the site will be treated or discharged after the pipe is gone, writing:

Without onsite containment and treatment [at the mill site on Abercrombie Point] there is no other place for surface runoff to go other than Pictou Harbour… part of any industrial approval involves surface runoff, so even though they aren’t running they still need a treatment plant built for that unless they just let it go into the harbour untreated.

This is much larger than anyone is letting on, as Pictou Harbour would be taking the runoff without a treatment plant in place, or the Boat Harbour pipeline stays in place and yet another promise is broken. I can see government extending the use of Boat Harbour again, as the options are again limited in this short time frame. They should have been on this years ago.