You are here: Home / Featured / The Northwood board has been expressing “grave concern” about double occupancy rooms for years 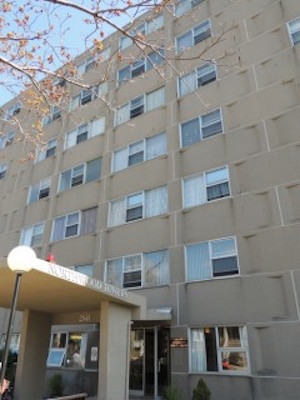 Northwood Tower is a separate facility from Northwood Centre. There are no cases of COVID-19 among tenants in the tower. Photo: Northwood website

Carolyn Van Gurp is a tenant with her own apartment in Northwood Towers at 2641 Northwood Terrace. Her 66-unit building is next door — and not connected to — Northwood Centre, which provides long-term nursing care to hundreds of frail elderly residents.

One of the Centre’s nursing homes residents is Carolyn’s 93-year old mother. Carolyn’s mum has Alzheimer’s and recently tested positive for COVID-19 after two previous tests came back negative. She has no apparent symptoms.

“Knowing that my mom is in familiar surroundings, with her own artwork on the walls, and cared for by loving and competent staff gives me a sense of optimism in a time of grief,” says Van Gurp. “Anxiety and grief on all levels, caused by circumstances beyond the control of anyone.”

Carolyn (and others) have not been allowed to visit the Centre since the outbreak began there eight weeks ago. Out of more than 300 cases diagnosed, 49 people have died. Although it fluctuates (one was added yesterday), the number of active cases at Northwood Centre has been decreasing, and now sits at 34, and Carolyn’s mother has been moved from a shared room — a configuration which exacerbated the spread of the virus — to a private room.

“From day one I have racked my brain thinking of ways to protect my mother from the virus,” continues Van Gurp. “The high level of care my mother requires means that it is not possible to move her to my apartment or offsite. Northwood sought government funding before the pandemic to reconfigure from shared to single rooms. I can think of nothing doable beyond what Northwood has already done to protect our loved ones.”

Both the Chief Medical Officer of Health, Dr. Robert Strang, and Northwood CEO Janet Simm, have identified shared rooms as one reason COVID-19 spread like wildfire after unsuspecting, asymptomatic workers introduced the virus into the Centre building. Van Gurp says her reference to Northwood seeking government funding to convert shared rooms prior to the pandemic is based on a letter sent by NDP leader Gary Burrill. It reads:

The government’s failure to have opened a single new long-term-care facility in the last seven years is a crack that COVID-19 has widened.

Every decision not to proceed with building a new nursing home or updating an older facility has also been a decision not to replace older, shared-room facilities with the contemporary single-occupancy standard.

Lisa Roberts, the MLA for Northwood Manor, drew attention in the Legislature to Northwood’s recent unsuccessful attempts to seek government funding for this kind of room reconfiguration, just prior to the pandemic.

On February 28, during a debate over the provincial budget estimates,  Halifax Needham MLA Lisa Roberts asked Health Minister Randy Delorey why — for three consecutive years — the government did not support a capital funding request from Northwood to build new floors above to eliminate some of  the  “double and triple-bunking” of residents in the Centre.

“The Board of Northwood has determined they are not meeting the standard of care required, in terms of infection control, in rooms that have double and even triple occupancy,” said Roberts. “The initial proposal was for 13-million-dollars and would permit Northwood to maintain the same number of beds but in single occupancy rooms that would meet the standard  we now require given the increased medical needs of long-term care residents.”

Delorey characterized the Northwood proposal as “a complete replacement” and said discussions with the Department of Health were continuing. He noted the province had allocated $15 million more for new long-term care facilities and had announced a total of 162 new beds for Cape Breton, Meteghan, and Halifax.

“There is no provincial standard that requires licensed homes to have single-occupancy rooms,” said Delorey. “We do have preferences for single rooms and that’s why most new-builds have more single rooms. But we still need the bed capacity we have.”

Fast forward a few months to the 49 deaths resulting from a rapidly spreading, deadly virus inside the largest nursing home in the region. During a briefing with journalists two weeks ago, Simm said Northwood is, “in discussions with the government” about how to reconfigure the facility to prevent outbreaks in the future. She has also said she would welcome a public inquiry, as both the Nova Scotia Government Employees Union and NDP have urged. Premier Stephen McNeil has said the role of shared rooms will be “reviewed” once the virus has gone.

It is true that most residents of long-term care homes in Nova Scotia share a room, and often a bathroom, with another resident. What is different about Northwood is the fact it was built during the 1960s. Its shared rooms are generally smaller than those found in nursing homes built in the past 30 years, which provide additional space for family visitors and equipment such as walkers. An upgrade at Northwood Centre appears to have been overdue well before COVID-19 struck.

Carolyn Van Gurp says she is very satisfied with the care her mother is receiving at Northwood Centre.  But she complains she and her neighbours who are tenants at Northwood Towers are now being stigmatized. Last week, the property manager of the building where Carolyn’s daughter lives — in another part of Halifax — told Carolyn she could no longer visit, apparently because of the association between the word “Northwood” and COVID-19.

“Unfortunately, the grief and anxiety of the Northwood community is now compounded by sometimes inaccurate media coverage and some community shunning of Northwood tenants and staff, despite the fact that there are no COVID cases among the tenants,” writes Van Gurp in a message posted on Facebook and sent to the Halifax Examiner. When interviewed, she cited TV reports which have shown pictures of Northwood Towers when the story is about the COVID-19 outbreak in Northwood Centre.

Van Gurp acknowledges the layout of the Northwood campus (comprised of the Centre, the Towers, and the Manor) can create confusion among journalists and the public. The problematic Centre is home to 485 long-term care residents; a total of a few hundred tenants live in Northwood Towers and the adjoining Northwood Manor. The Manor includes a section with apartments for tenants in “supportive” or “assisted living,” because of such matters as mobility issues. It also includes a physically separate section with rooms for residents who need various levels of nursing care, similar to residents in Northwood Centre.

Last week, the smoking room used by Manor residents was closed after one of them tested positive for COVID-19. Van Gurp says this did not affect tenants at the Manor who are not permitted to smoke in their apartments and who use a smoking area outdoors on Gottingen Street. So far, notes Van Gurp, there have been no COVID-19 cases among Northwood tenants and no reason to shun them.