You are here: Home / City Hall / The new convention centre is already a financial disaster for the city 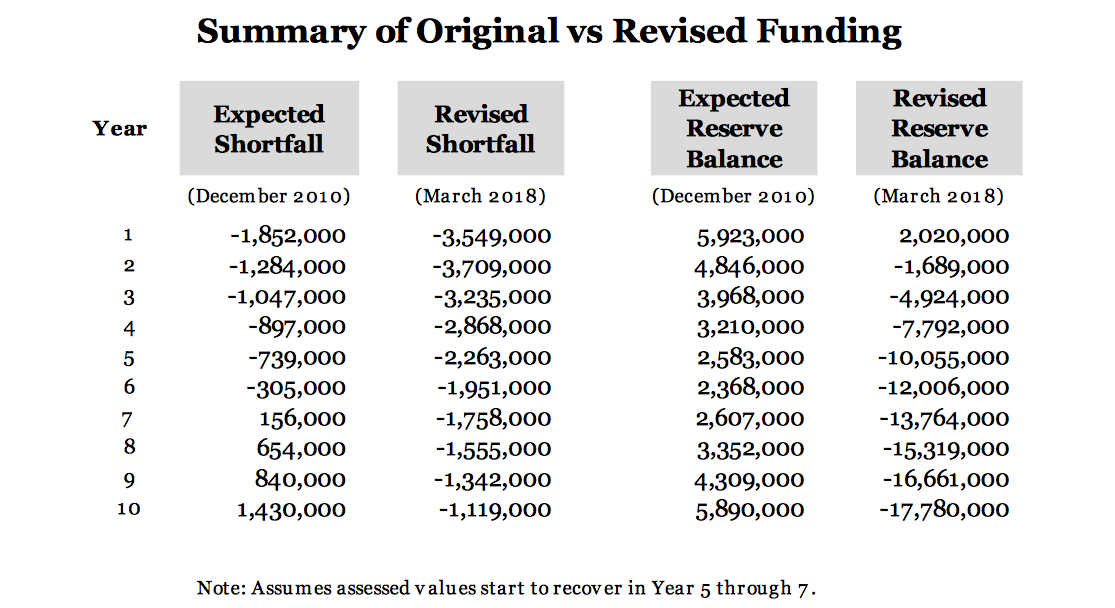 The city’s Convention Centre account, from a report prepared by Bruce Fisher, the city’s Manager of Financial Policy and Planning.

The city expected to have a $1.8 million deficit on its Halifax Convention Centre account this year, but that figure has nearly doubled — to $3.5 million. And a revised analysis of the account (above) shows that what had been a projected $5.89 million surplus after 10 years is now a $17.78 million deficit. That’s a swing of $23.67 million.

The revised figures are found in a city staff report to Halifax councillors; the report will be discussed at next Tuesday’s meeting of regional council.

In practice, here’s how it worked. A convention centre account (called Q521) was created, and funded with property taxes collected on the Nova Centre site as the development was being constructed. The details of the funding of the account and expenditures from it were first spelled out in a staff report from July 12, 2012:

While there has been considerable change in the economic environment since December 2010, the business case for a new convention centre remains strong. The funding strategy for the Municipality’s share of the costs is to direct taxes from the entire convention centre site to a reserve, and to pay for HRM’s share of the lease and operating costs from this reserve. As HRM is committed to its share of the costs, this strategy is dependent on the projections for tax revenue from the site.

Financially, there is expected to be solid potential for the property tax streams from the site to pay for the annual lease costs of the facility. There is also potential growth in assessed values for surrounding properties. From staff’s analysis, the project can likely be financed without impacting existing programs and tax rates. However, as with any major project of this size and scope, there are risks. This is inevitable when considering that the facility will not be fully built for several years to come. Accordingly, HRM staff have undertaken due diligence and included a number of points in the Memorandum of Agreement to ensure those risks are mitigated:

Tax Revenue. The assessed value of the convention centre site, as set by the PVSC, will not be established until after the building is complete and operational. It will also be partially dependent on the occupancy rate. To be conservative, HRM staff has based the projected assessment on existing similar commercial space, and used a 70% occupancy rate in the early years growing to 85% over time. Assessment growth was projected at 75% of the trend for the past 5 years.

Payment Deferral. To address the risk that the entire project is not substantially completed by the time the convention centre opens, the agreement with the province allows HRM to defer up to 25% of its annual payment for up to 10 years.

Alternate Funding Reserve. The projected revenue from the site over the life of the project greatly exceeds the convention centre cost to HRM, even using conservative assumptions. However, since revenues grow over time, there is a cash flow risk in the early years, as costs are relatively constant over the life of the agreement. In the unlikely event that there is a period where the accumulated revenues are not sufficient to cover accumulated costs, HRM could use funds from another reserve, such as the Strategic Growth Reserve.

So much for the “conservative assumptions.”

Those detailed assumptions have failed on all accounts.

The most dramatic failure is in expected property taxes received. As Tuesday’s staff report explains:

Since 2010 there has been considerable office construction in downtown Halifax leading to higher vacancies than expected and downward pressure on office leases. Hence, rather than assessments growing as expected, assessments in the downtown office market have declined.

Remember that when the convention centre financing plan was adopted in 2012, the city expected a continued assessment growth for the post-construction Nova Centre, calculated at 75 per cent of the annual growth rate from 2007 to 2012. This was billed as a conservative assumption. Instead, however, actual assessed values have plummeted.

I’ve asked city staff what the expected assessed value of the Nova Centre complex had been, and how that would have translated into property tax payments into the convention centre fund. I’ll update this post when I get those figures.

But the staff report says that the current assessed value of the complex is $200 million — evidently far lower than expected. Moreover, developer Joe Ramia has appealed that assessment, saying even that is too high.

The lower assessed value translates into $900,000 less in tax receipts for this year than was planned. (A 2009 economic impact assessment by Gardner Pinfold suggested that property tax receipts from the Nova Centre would be on the order of $3.3 million a year, but I don’t know if that figure was adopted into the city’s plan. Again, I’ll update this post when I learn more.)

And it doesn’t look good for future years either. Explains the staff report:

Tax revenues for the Nova Centre will increase as the office tower is leased up and as the hotel is finished and occupied. However, there is considerably more office space downtown than in past years, leading to lower office rents and hence lower assessed values than would exist otherwise. While the economy remains strong, it is extremely difficult to ascertain when assessments for the downtown office market will again start to rise. This broader downtown trend will continue to affect the HCC reserve with the reserve balance being negative into the medium term…

The next few years are even more dire. The 2012 plan expected a “70% occupancy rate [for the Nova Centre] in the early years growing to 85% over time.” The actual occupancy rate this year is 30 per cent. But property taxes are based on assessments from two years previous; that is, taxes that are due in 2020 are based on assessments made this year. The low vacancy rate at the Nova Centre means lower assessments, and therefore the low vacancy rate is already cascading into future-year deficits in the city’s convention centre fund.

Staff’s suggested approach to dealing with the budget shortfall — now predicted to be up to $8 million in the next four years alone — is twofold:

First, any city receipts gained from property sales within the Nova Centre complex — that is, money collected through the deed transfer tax — will be placed into the convention centre fund along with the dedicated property tax stream. Again, this is philosophically dishonest, and treats the Nova Centre differently than every other property in the city. (And it’s interesting that city staff seem to predict a sale of one or more of the buildings.)

Second, suggests staff, “a portion of the 2017- 18 projected surplus may need to be directed into the HCC reserve.” That $12 million budget surplus came mostly from deed transfer receipts from large commercial property sales in Highfield Park and elsewhere across the city. As I noted last month:

It’s anyone’s guess how much revenue staff’s suggested approach to the budget shortfall will generate, but it’s extremely unlikely that it will make a significant dent in the total long-term convention centre account deficit.

But that’s not all.

The bulk of that, however, is a provincial responsibility. Notably, that includes $1 million in “incentives for conference participants disadvantaged by the delayed opening of the facility” — that it, those organizations that had booked conventions in the new convention centre only to find the conventions had to be cancelled because construction was delayed were flat out paid (I’m guessing with free booking) to reschedule the conventions after the building was finished.

Another $4 million in provincial costs are for unspecified “ongoing operating costs.” I’m guessing that most of those costs relate to collapsed revenues in the old convention centre, but I believe some of the costs are related to transitioning into the new facility, buying new software, and the like.

However… “there could be as much as $1.5 [million] in capital and smallware costs to be paid by HRM once final information becomes available,” notes the staff report.

Additionally, the province has hit the city up for $301,500 incurred by Events East last year. This is for “two items that had not appeared in the [original agreement] (ICT Peripherals and Governance) and one that exceeded the amounts in the [agreement] (Sales and Marketing). The amounts requested are legitimate expenditures that were made by Events East.”

One last note: the $17.78 million deficit in the convention centre fund forecast for Year 10 is itself dependent on the rosy assumption that “assessed values start to recover in Year 5 through 7,” meaning that both downtown commercial assessments increase and that the Nova Centre occupancy will eventually reach 85 per cent. There is no clear reason to think either is inevitable or even likely.

Things could get a whole lot worse.