You are here: Home / Commentary / The candidates’ debate, take two 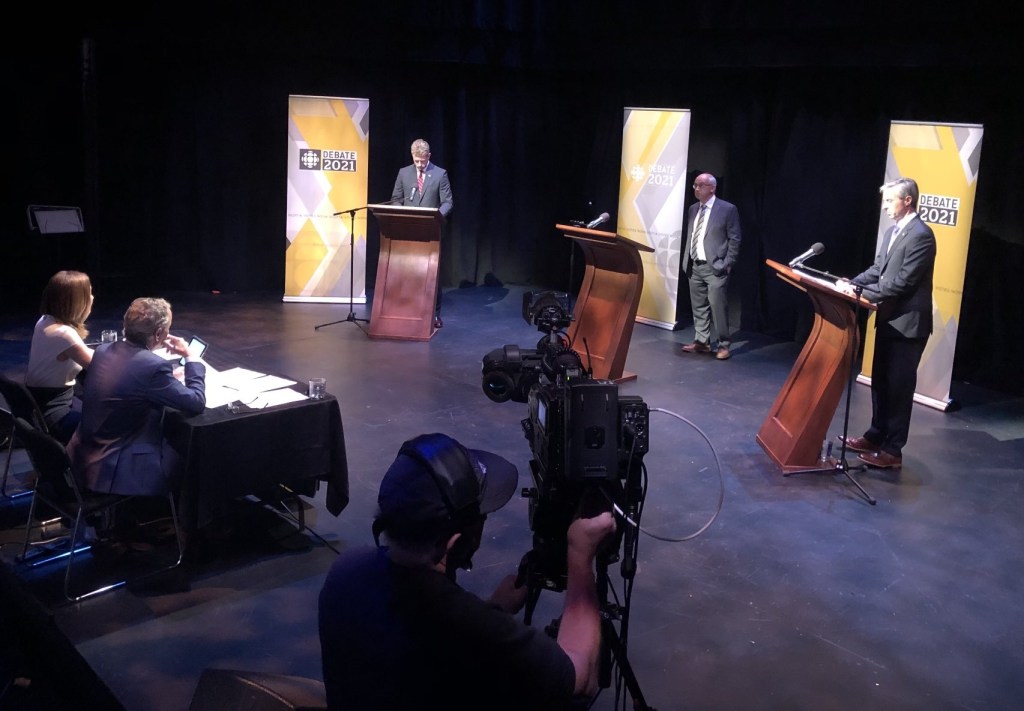 Last week’s skeptical — some might call it cynical — column about the provincial election leaders’ debate prompted a number of more thoughtful-than-I-deserved responses.

Richard Starr, for example, agreed with my point there were “ideas buried in the [leaders’] talking points that are worthy of debate.” But, he continued…

I assume you mean informed debate and in that regard the news media have a responsibility to do some digging. Otherwise, the talking points just keep coming and people accept stuff like the PC pay cheque guarantee, the notion that our economy is on the “right track,” that rent controls will stop development, or that we can solve the mental health crisis by giving everybody $1,000 worth of coverage for a private practitioner. So far, the mainstream media haven’t been doing much of a job of digging.

Brian Gifford also noted “some value in hearing the ‘talking points’ since they show some real differences in policy that viewers/listeners may not know if the debate is their main source of information. There was at least some opportunity to expose the flaws in some of them.”

There would be a lot to be gained by digging deeper, exposing the unexamined flaws and weaknesses behind the talking points.

I’m curious how you would recommend the debate be structured better, Stephen?

Mr. Kimber, I think that your media report is as predictable as the political talking points! Is this all you have to offer?

Okay…. I have my assignment.

Where to begin? Not with the debates themselves. The debates seem to me to be just one more symptom of a broken-down electoral system.

Let’s start with fixed election dates. We are the only jurisdiction in the country where the leader of the party in power gets to choose the timing of the next election based entirely on partisan self-interest. Can you offer another better explanation for the fact we are trooping to the polls this month, deep in the heat and heart of BBQ and vacation season?

That’s not to suggest fixed election dates would be a cure-all for what ails our body politic. Otherwise, all those other fixed-election-date jurisdictions would have better governments.

But it would be a start, and an opportunity to re-think how we think about how we do election campaigns.

What if political parties that wanted to participate in the electoral process were required to make public their full platforms a month in advance of the start of that fixed-date campaign?

The purpose of this time delay would be to allow an independent body — a sort of parliamentary budget office for elections — to analyze and cost out each party’s package of promises and economic assumptions. The office wouldn’t make value judgments about which party’s platforms make the best fiscal, political, and social sense. It would be up to the party leaders to make the case for their own approach and priorities, and for us to decide. But we, as voters, would at least have a common understanding of the price tag for each platform.

Does Iain Rankin’s promise to keep all the many and various promises he’s made while balancing the budget in four years make sense? Is Tim Houston really a smart accountant, or does he just play one in Tory TV ads? And what about Gary Burrill’s oft-repeated warning that the Liberals’ other pre-election promise — to cut $209 million in programs and services next year — will “cause harm to communities, to hospitals, schools?” True or false?

It’s almost impossible for reporters in mostly under-staffed newsrooms — all desperately trying to keep up with the daily campaign firehose of new promises, re-packaged old promises, and inevitable off-the-campaign-trail-cuff promises to fix this local road or build that bridge — to have time to circle back in the midst of a 30-day campaign to see how all the promise-pieces fit together.

Some journalists do try. Brian Flinn, for example, allnovascotia.com’s veteran legislative reporter, recently fact-checked Burrill’s argument that Liberal plans to chop that $209 million next year will lead to cuts in services, and Rankin’s counter-claim that it won’t.

Given Flinn’s clear-headed analysis of recent government spending and its own spring fiscal plan, his perhaps too cautious, fair-reporter conclusion was that Rankin’s we-can-do-this-and-have-that promise “won’t be easy” to keep.

But that raises the next problem.

When Flinn put his fact-checked points to Rankin, the Liberal leader did his best slither, suggesting he couldn’t really comment on the potential impact of his election promises on his fiscal plan until the government publishes its next fiscal update — after the election!

Really? That used to be the traditional bait-and-switch argument employed only by new governments.

Soon after Darrell Dexter’s New Democrats won the 2009 provincial election, for example, they pronounced themselves shocked and appalled to discover the Tories had left the cupboards barer than bare, meaning they could no longer keep their no new taxes/no program cuts promise. Sorry about that. As if they couldn’t have guessed the province’s awful financial situation before they got the keys to the premier’s washroom.

Now, we have the spectacle of the premier of a party in power for eight years essentially making the same claim that he can’t know the real fiscal state of the government he leads, setting the table for him to renege on his promises as soon as the voters have left their voting booths.

No wonder voters are cynical.

Providing all parties and the public with a pre-election snapshot of the province’s current fiscal state should be another key job for that new independent legislative budget office I mentioned.

With the current fiscal state thus stated and the party platforms already public, the campaign itself could focus on key issues, perhaps as determined by public opinion polling: healthcare, the economic recovery, the environment, affordable housing, education…

Each week, there could be a debate that would centre on one of those designated issues. That would make a fuller discussion of each possible, and allow voters to compare and contrast the parties’ positions on key issues.

The last week of the campaign could then be a free-for-all, allowing for some much-needed serendipity and surprise.

Since we ultimately choose leaders who have to make decisions about issues we can’t anticipate — can you say pandemic? — I’d also supplement those current-issue-centric debates with probing personal televised interview-conversations with each individual leader to get a better gauge of who they are and the values they would bring to the job. (An election campaign, after all, is ultimately a leader’s job interview.)

Finally, in my rose-tinted electoral world, the eventual electoral results would be calculated based on some form of proportional representation, meaning all our votes would matter in ways they don’t in the current first-past-the-post system.

Pie in the sky? Of course. More complicated than this column suggests? Absolutely. (For starters, we would need to find ways to accommodate the minority governments proportional representation would likely create to a system with fixed election dates.)

But no one — certainly not me — is suggesting this should end the discussion. What would you do to make our electoral system fairer, more responsive, more meaningful?