You are here: Home / Environment / The ban on uranium exploration and mining is safe – for now

After yesterday’s meeting of the Standing Committee on Natural Resources and Economic Development, Nova Scotia’s Uranium Exploration and Mining Prohibition Act seems to be safe.

At least for now.

The agenda for the meeting, chosen by the Progressive Conservative caucus, was “uranium exploration in Nova Scotia.” There has been a moratorium on the practice since 1981, and a legislated ban since 2009.

Witnesses were Department of Energy and Mines deputy minister, Simon d’Entremont, Mines Branch Executive Director Don James, and the mining industry’s cheerleader-in-chief Sean Kirby, who heads the Mining Association of Nova Scotia (MANS). (More on MANS membership and activities can be found in the fourth article in the “Fool’s Gold” series in the Halifax Examiner and Cape Breton Spectator).

Also at the table were geologist Rick Horne, president of the MANS board of directors, and Peter Oram, an environmental specialist who is also on the MANS board.

So no shortage of MANS-men, who outnumbered the government officials on the all-male panel.

At the end of the meeting, NDP Dartmouth South MLA Claudia Chender put forward a motion to have the committee re-affirm its support for the ban on uranium mining, citing “significant public concern about the risks of uranium mining, resulting in recommendations by the 1985 inquiry to issue a moratorium on the industry and subsequent legislation by the NDP government in 2009.”

The motion was carried, with Liberal and NDP committee members voting for it. Only the two Progressive Conservative members, Cumberland North MLA Elizabeth Smith-McCrossin and Pictou Centre MLA Pat Dunn, voted against it.

But did a vote against the motion to keep the ban in place mean the PC members were voting to lift it? Asked that question, Pat Dunn came up with a tortured answer that didn’t answer much of anything.

He said that the session was a “fact-finding mission” and that the PCs were not “promoting for that” [having the ban lifted], just “wanting to get more information.”

Asked if a PC government elected in the future would lift the ban, he replied, “Right at this moment, no.”

“But voting no against a motion to keep the ban in place is the same as saying you want to lift the ban, isn’t it?” I asked him.

“It could be interpreted that way, yes,” Dunn replied.

Reporters then asked him how they should interpret the PC vote against the motion to retain the ban, and he said, “We did vote against it, yes,” because he and his PC colleague Smith-McCrossin were thinking it might close the door for more information to come forward. 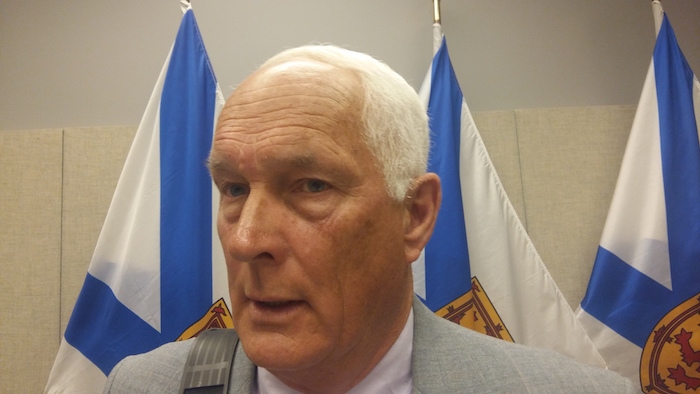 Why was uranium on the agenda?

There are lots of questions to be asked about why the opposition PCs decided that September 2019 was an opportune time for the Standing Committee on Natural Resources and Economic Development to spend two hours talking uranium.

As Deputy Minister d’Entremont pointed out, uranium has hardly been a hot topic in the province in recent years. There haven’t been any serious requests from exploration companies to review the Act for “quite a long time.” He said no communities had stepped forward to ask if their area could benefit economically from uranium exploration. And, he added, Nova Scotia can meet its own energy needs now and into the future with the current mix of energy sources, and there is no plan to include nuclear energy, which would require uranium.

Further, according to d’Entremont:

The current state of global market for uranium is that there’s a lot of supply, and certainly enough to meet current demands of the nuclear power industry. Prices have fallen dramatically from $65 in 2011 to about $26 a pound today. Saskatchewan is Canada’s uranium mining hub and they’ve seen layoffs of late. It’s a challenging time, to say the least, for [the] uranium mining industry.

So if exploration companies and communities have not been clamouring to get uranium exploration back on the government’s agenda and pushing to get the ban lifted, who has? 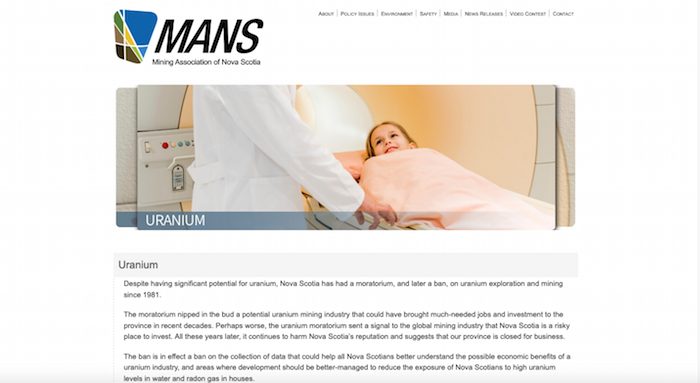 Screenshot of the MANS webpage on uranium, September 24, 2019.

On its website, the Mining Association of Nova Scotia devotes an entire page to uranium, extolling the virtues of the radioactive metal and chastising the province for nipping “in the bud a potential uranium mining industry” when it imposed the moratorium in 1981.

So it’s no surprise that MANS executive director Sean Kirby was front and centre at yesterday’s Standing Committee meeting, rehashing those industry talking points, as he is paid to do.

He said the moratorium that was placed on uranium exploration in 1981 happened in the lead-up to a provincial election, it was politically motivated, and “had no basis in scientific evidence.”

According to Kirby, “Jobs and investment were lost, and a signal was sent that Nova Scotia is closed for business.”

“Modern uranium mining is safe and environmentally responsible,” he stated.

While most uranium is used to produce nuclear energy, some is also used in medicine, smoke detectors, and in food preservation. Thus, said Kirby, uranium “literally saves lives.”

He said that because we benefit from uranium mined in other jurisdictions there is no reason not to allow it in Nova Scotia.

He was later challenged by NDP MLA Claudia Chender, who pointed out that the International Atomic Energy Agency has said the world has more than enough uranium for all its needs for many years to come, even for scenarios of high demand, so there seemed to be no motivation “apart from profit” to consider lifting the ban.

The ban is bad for our health

At one point, Kirby veered off into the realm of hyperbole.

He told the committee that “we are exacerbating health risks” of uranium in Nova Scotia because we are not exploring for it. In his view, it is because companies are not allowed to explore for or mine uranium in Nova Scotia that people are building homes in areas with elevated uranium levels. And this “potentially exposes Nova Scotians to higher levels of uranium in well water” and to radon gas, which is created by the decay of uranium that is widespread in the province’s underground.

In response to questions about this, particularly from the credulous MLA from Cumberland North, Smith-McCrossin, Kirby continued to weave his tale that there is a lack of knowledge about uranium in the province and it is a public health risk.

This contradicted what Deputy Minister d’Entremont told the committee. He said that while Nova Scotia does have naturally occurring uranium in its rock formations that bring “challenges” that need to be addressed, much of the work that government geologists do in this area is to “identify the risks of naturally occurring radioactivity.”

The deputy minister said the government works to educate the public on those risks, and pointed out that his department has maps online that show risks of both radon and uranium throughout the province. 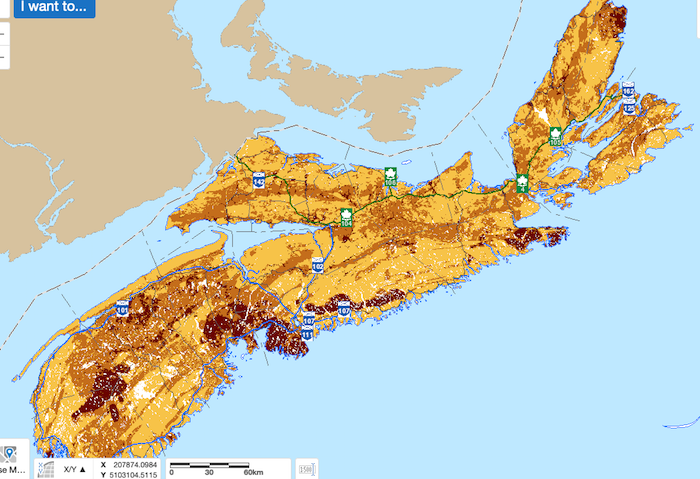 D’Entremont said uranium exploration is “not a priority” for the province, adding:

Things work right now. We don’t have a huge demand for uranium from companies and the current policy environment works and gives companies certainty about what they can and can’t do. They’re looking for certainty and in this case, you can’t. And companies are not going to be here spending their resources on something that’s not going to be fruitful for them in the long term.

This is definitely not the message that Kirby tried to convey to the committee.

This seems a stretch, to say the least. At least two of the large energy companies that were exploring for uranium in Nova Scotia in the 1970s — Gulf Minerals (a subsidiary of Gulf Oil) and Esso, had already discontinued their exploration before the 1981 moratorium.

And if the ban did harm to the province’s reputation as a destination for mineral exploration, how does Kirby explain the latest gold rush? Today, gold exploration and mining companies are flocking to Nova Scotia, and describing the province to potential investors as “mining-friendly” and the tax structure as “favourable.” (Not to mention the millions of dollars that Nova Scotian citizens have handed out to prospectors and mining companies in recent years, tallied here, and also to MANS, which in the fiscal year ending March 31, 2019 received $110,684.69.)

Kirby also zeroed in on uranium mining in Saskatchewan, which produces 22% of the global supply.

“Saskatchewan has been one of the top suppliers of uranium globally since the 1950s,” he said. “If uranium caused problems that some allege, the people of Saskatchewan would tell us so.”

Perhaps he has not been listening very carefully; indigenous people in Saskatchewan have been trying to tell government and industry about the negative effects that uranium mining has had on them and their land.

Nor did Kirby mention that uranium mining is prohibited not just in Nova Scotia, but also in the provinces of Quebec and British Columbia, as it is in many other jurisdictions around the world.

Raymond Plourde, Wilderness Coordinator at the Ecology Action Centre, which pushed hard for the 1981 moratorium and uranium inquiry, said he was, “heartened to see the vote by the members of the current government and the NDP to maintain and reinforce the ban on uranium mining and exploration. It was something he said was “hard-fought and won by thousands of Nova Scotians many years ago.”

So for now, it looks as if the uranium issue has been once again laid to rest – or at least to sleep.

In an email, Graham Steele, who was finance minister in Dexter’s NDP government that passed the legislative ban and who, while in opposition in 2007 introduced a private member’s bill trying to get a ban, had this to say about discussions on uranium mining:

… this debate tends to follow the world price of uranium. When the price is high, Nova Scotia’s uranium deposits look more attractive, and the debate re-opens.  When the price is low, there is nobody to argue against the moratorium because our uranium would stay in the ground anyway.

Nobody, that is, except Sean Kirby and the Mining Association of Nova Scotia.

MANS doesn’t show any signs that it’s ready to give up on its efforts to get the ban lifted, and with the Progressive Conservatives apparently leaning in that direction, it is unlikely this is the last we’ll be hearing on the issue.

And just one more thing. I wanted also to mention how many times Kirby spoke about all the jobs to be had, if only we would lift the ban on uranium mining and send a signal to the global mining industry that we want to “create jobs in the province,” because that is important if we want to “keep growing the economy.”

I lived for a time in Niger in West Africa and had a chance to visit one of its large uranium mines, which was one of the most hellish, depressing places I’ve been in my life, rife with social inequities, environmental devastation, and environmental racism. Uranium has been mined in Niger since 1971 and the country produces 5% of the world supply. Nevertheless, in 2018, Niger ranked dead last — 189th of 189 countries evaluated — on the United Nations human development index.