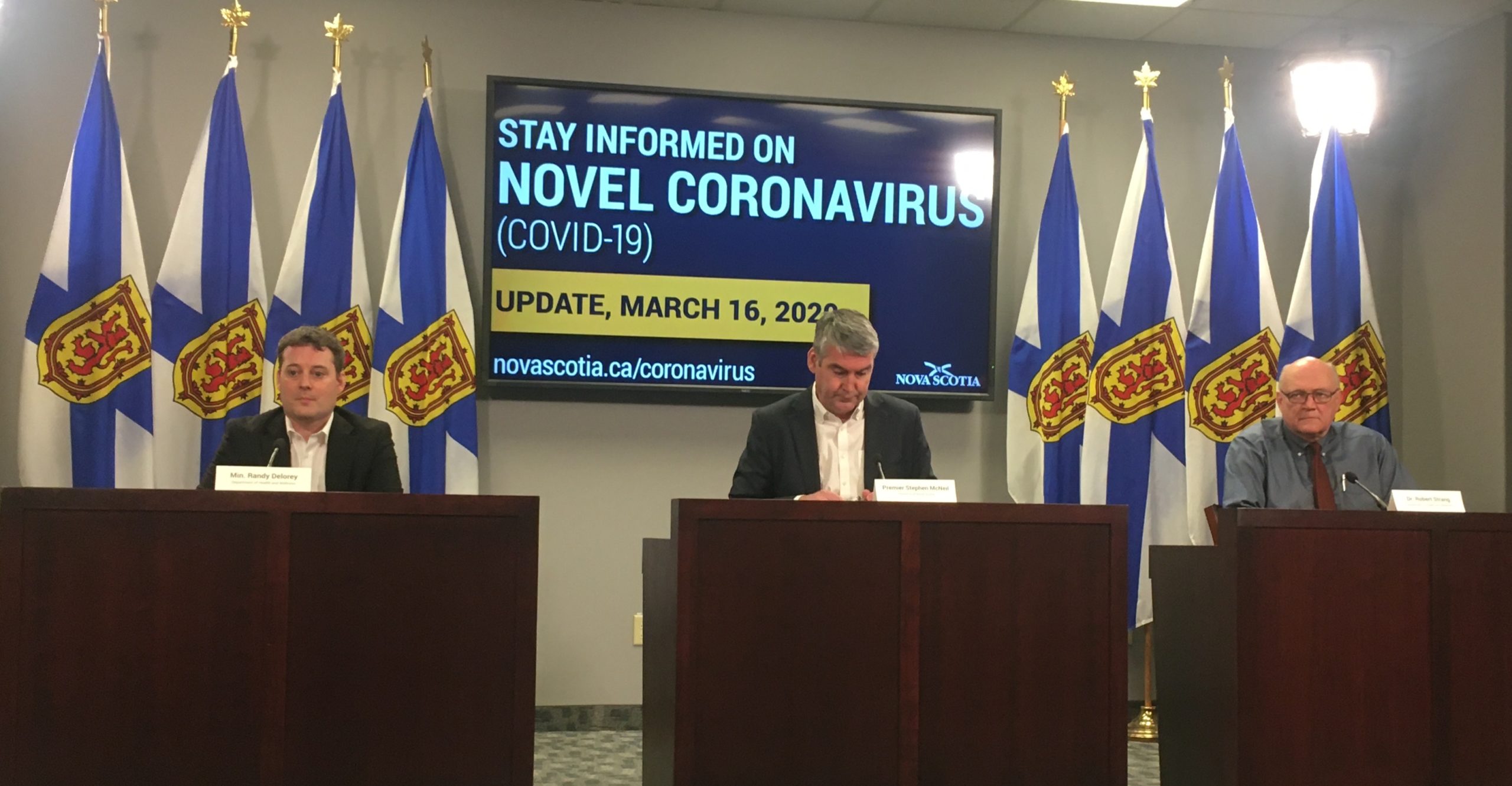 The two are a Halifax area couple (a man and a woman) in their 50s who have not travelled outside of Nova Scotia. They are presumed to have contradicted the disease at an event at which people who had recently travelled out of the country attended.

The two are self-isolating at home, as are two other members of the household.

Strang said the couple were at “events where there were people from out of the country.” He said health officials are “working with those event organizers to get individual information on people and who was there from Nova Scotia and the timelines of when that happened — could people still be at risk of coming down ill now? — and how we’re going to communicate that.”

Strang said the investigation of who attended the events and who might be infected is “kind of like a police investigation. We’ve got a lot of detective work called. It’s called shoe leather epidemiology, people getting on the ground, talking to people, getting all the information to put all the pieces together.”

“We don’t have any evidence of community spread at all in Nova Scotia,” he reiterated.

Still, Strang said “we’re at the beginning of this. I’m not surprised at all that we announced three cases yesterday, two today. We will see more. And we will at some time see ones that are spread within the community.”

Yesterday, McNeil told me that the province had 240 ventilators, and has ordered 140 more. Today, I asked McNeil if the number was sufficient.

“Through the health advice we are receiving, yes, we believe it is,” answered McNeil.

“What the number one thing is,” he continued, “we need to make sure that as this virus comes in, we need put in the appropriate protocols to prevent the spread. And recognizing that less than 20% of the people with this disease will find themselves actually requiring medical care in a hospital. Many of them treated at home.”

I asked McNeil if the province had gamed out a worst-case scenario.

“Yeah, the Health Authority would have gamed it out,” he replied. “And that’s what we’re working towards, the worst case scenario — that’s why there are additional ventilators that will come in… we’re now hardening our health care system to ensure that we’ve built in the ability to respond to citizens who are impacted by it.”

“But I go back to what I’ve always said,” continued McNeil. “If we get Nova Scotians to self-isolate, we’ve made a major step in protecting Nova Scotians from this virus.

“This is the single biggest thing we can do to protect our system. Because if we end up getting more of the virus going into either a long-term care facility or one of our health care facilities, it’s much more difficult to control it. It’s — literally 80% of this is in the hands of each of us. By cleaning your hands and doing the proper protocol of self-isolating, that’s the gift we have about this virus: everyone of us, everyone one of us, can take the appropriate steps to protect the people we love, and to protect the people around us, our fellow Nova Scotians, by just doing these simple, unselfish steps of protecting our communities.”

Strang echoed McNeil. “Social separation and isolation — they’re critically important,” he said. “If we adhere to these, we can actually bring down the impact from 30 to 50% of the transmission of this virus. But we only get that if everybody is doing, and we all are working together. And that will have a huge impact on the number of people who get sick and the stresses that are put on our health care system.”