You are here: Home / Featured / Staff shortages at Northwood continued weeks after Nova Scotia Health stepped in to help 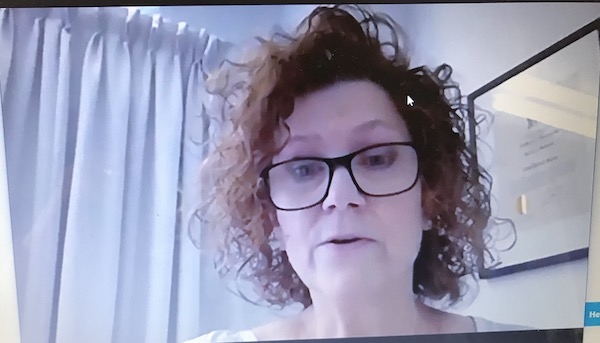 Janet Simm, CEO of Northwood, on a Zoom call this spring.

Shortages of front-line workers — primarily Continuing Care Assistants (CCAs) and nurses — continued to be a critical issue at Northwood in Halifax long after the Department of Health activated an Emergency Plan on April 19 to assist with an outbreak of COVID-19, which would eventually claim 53 lives.

That conclusion is supported in daily reports of meetings held from April 20-May 4 by the Incident Management Team, which included senior managers from Northwood, the Department of Health, and the Nova Scotia Health Authority (NSHA). The reports were requested last July under Freedom of Information and Protection of Privacy legislation by the NDP. You can read them here.

For families who lost loved ones and are participating in a proposed class action lawsuit against Northwood and the Province of Nova Scotia, the reports will be difficult reading. And for Northwood staff working overtime and other health professionals who stepped up to assist, these notes serve as a permanent reminder of a hellish stressful time.

Although the outbreak began April 5 with one positive case among staff and five more among residents two days later, it wasn’t until there were three deaths April 17-18 that a decision was made to deploy 59 staff from the Halifax Infirmary to assist the largest nursing home in the region.

The April 20 Incident Management Team Update gives an indication of the depth of the crisis:

• Total number of infected residents (as of 0945h meeting) is 111
• 59 people from 8.4 (mostly NSGEU nurses from Halifax Infirmary ) now scheduled for single shifts or assignments
• Critical staffing shortage for tonight. Need 6 more RNs
• Challenges with scheduling and coordination of all components. Includes clinical, housekeeping (22 required), procurement (delivery of PPE) and other support staff.

By April 22, Northwood was reporting nine resident deaths and 134 positive tests among staff and residents. The daily update from the Incident Management Team says “floors are staffed for tonight” but concerns remain around personnel, including Continuing Care Assistants (CCAs) who feed, hydrate, clean, and toilet residents.

On April 24, Northwood managers asked the province for updated infection control guidelines to address growing suspicion transmission may have occurred through workers who didn’t have any symptoms. Until then, staff had been permitted by Dr. Strang, the Chief Medical Officer of Health, to return to work if they tested negative before the 14 day self-isolation period had ended.

By April 26, the daily Incident Management updates show the shortage of front-line workers at Northwood was not going away. The ongoing testing of staff and residents at two large apartment buildings — Northwood Centre and Northwood Manor — was starting to reveal that “spread” was occurring as a result of asymptomatic residents infecting those with whom they shared a room or bathroom. Most rooms were doubles in a facility with 469 residents and 600 staff. Nine rooms were triple-bunked in the Centre.

CCAs had also been assigned to work at different buildings connected by passageways at the Northwood complex. Here is a note dated April 26 that appeared on a NSHA Incident Management System spreadsheet:

Trying to use physical structures as an advantage to keep patients separated, no more Manor/Centre connection. Keep positive and negative patients separate. Keeping staff separated in these areas as much as possible as well.

• we are short 3 RNs
• Two more positive staff today – 1 housekeeping, 1 CCA — total 75 staff positive now
• Need 1 LPN and 10 CCAs for tonight. Also short facility supervisor for tonight — this is a priority and will be covered.
• Families questioning why military is not being called in to assist. Communications team to develop messaging and FAQ.

Eight days after the Emergency Response team arrived at Northwood on April 19, paramedics were still on site. So were nurses from the Infirmary and personnel seconded from Health who were making phone calls to keep families of Northwood residents updated. More than 40 Northwood employees were home self-isolating.

Against that backdrop, here is a summary of the actions taken at Northwood on April 28. 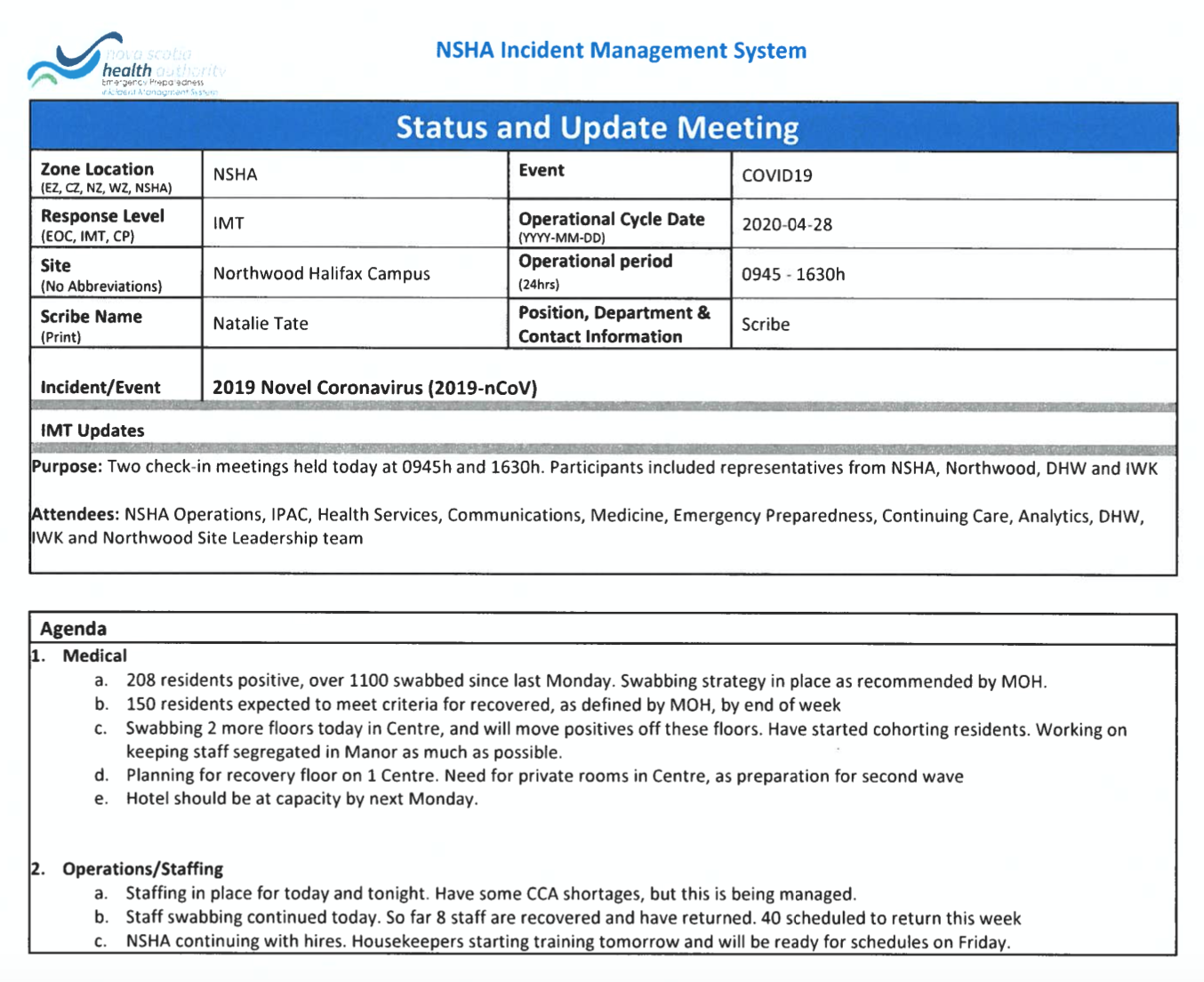 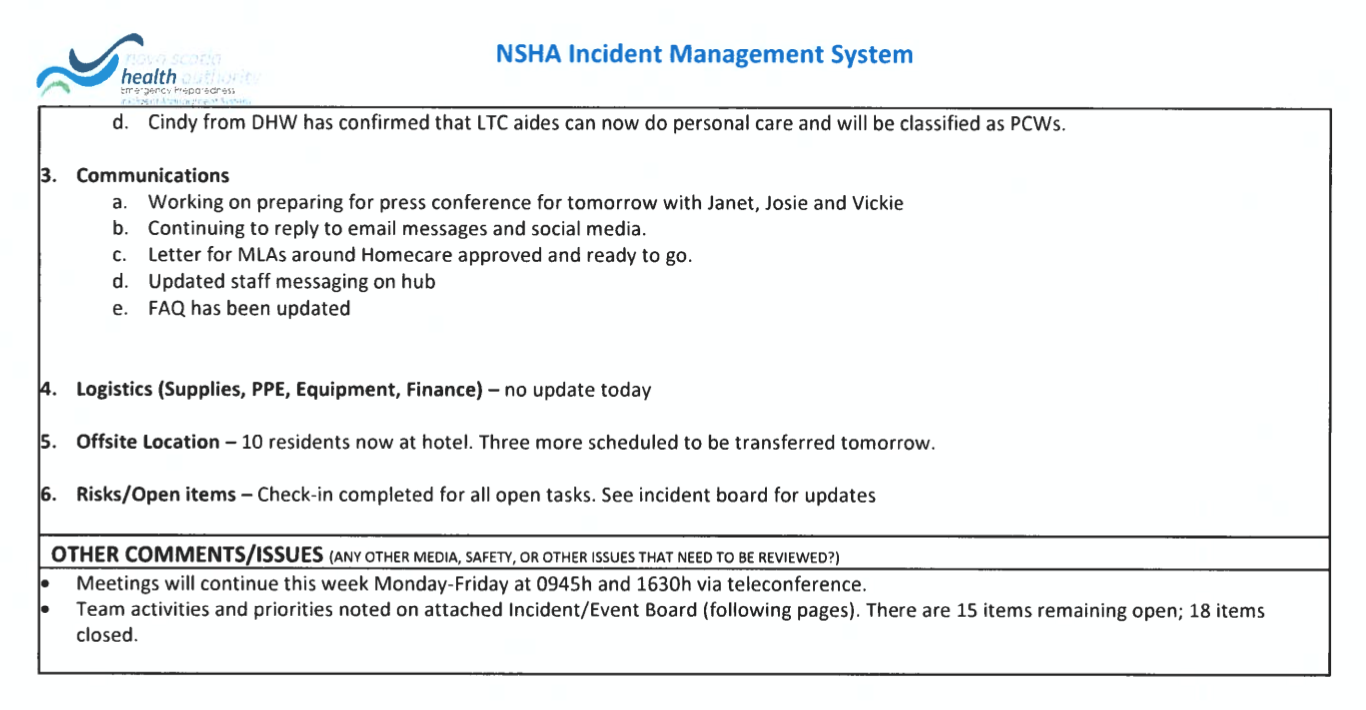 • 208 residents positive, over 1100 swabbed since last Monday. Swabbing strategy in place as recommended by Medical Officer of Health (MOH).
• Swabbing 2 more floors today in Centre, and will move positives off these floors. Have started cohorting residents. Working on keeping staff segregated in Manor as much as possible.
• Planning for recovery floor on 1 Centre. Need for private rooms in Centre, as preparation for second wave
•  Have some CCA shortages, but this is being managed.
• Dept of Health has confirmed that Long-Term Care aides can now do personal care and will be classified as Personal Care Workers.

The staff shortages continued through to at least the end of April, as shown by the Incident Management Update for April 30:

• Some shortages on staffing tonight. Currently short 11 CCAs and 4 LPNs for night shift.
• Projected weekend shortage for dietary. May be able to utilize kitchen staff for meal delivery.
• Of the 40 staff scheduled to return to work, 23 have had sick leave extended until mid next week.

The FOIPOP request for documents explaining how the Department of Health and Northwood responded to the crisis also reveals a high degree of integration in the messaging that went out to journalists and the public. 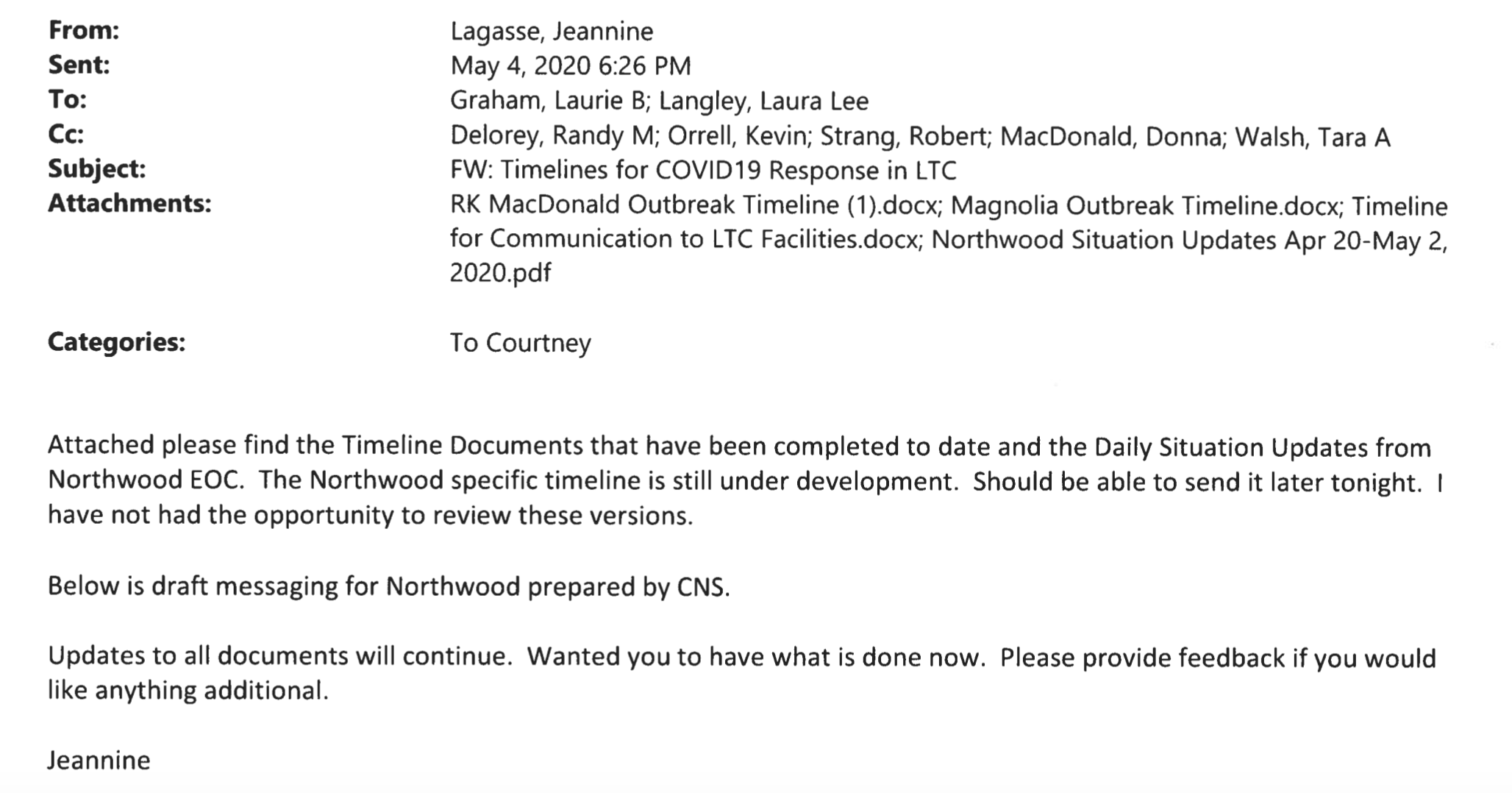 An internal email written May 4 by Jeannine Lagasse,the assistant deputy health minister, confirms that someone (unnamed) at Communications Nova Scotia had prepared “messages” and “talking points” (all entirely redacted in the documents provided to the NDP) for Northwood CEO Janet Simm to deliver during an online briefing May 6.

By then, 35 of the Province’s 41 deaths were Northwood residents.

NDP reaction to the documents

“The frightening level of incapacity these reports talk about on multiple days during this period reflects exactly what had been reported so often in the period before the pandemic,” said NDP leader Gary Burrill.

Burrill talked about the ”Broken Homes” report by the Nova Scotia Nurses Union five years ago as well as the report from the Expert Panel on Long-term Care two years ago. Both reports urged the immediate hiring of more front-line caregivers to reduce “chronic” understaffing in long-term care.

“What these FOIPOPed documents demonstrate,” claimed Burrill, “is the chickens came home to roost as a result of the government having ignored staffing concerns since they came to power.”

In Nova Scotia, many of the CCA positions are staffed by recent immigrants who earn approximately $18 an hour. Burrill said the solution to filling hundreds of vacancies is clear: increase the pay as Quebec, British Columbia, and Ontario have done to reflect that the work is difficult and there is risk of injury.

“We pay $18 an hour to CCAs in N.S. when the Workers Compensation Board data shows they are in an occupation most likely to sustain a back injury,” continued Burill. “Or get hurt on the job because there aren’t enough co-workers to help.”

What about the second wave?

By the end of the crisis, Northwood had seen 345 cases of COVID-19 affecting 246 residents and 99 staff.

As we experience a second wave of COVID-19 in HRM, there is a different set of infection prevention and control policies in place. Northwood has been permitted to reduce its capacity by 90 residents so it can offer more private rooms. The number of shared rooms in the 52-year-old Halifax facility is now below 20. Care units have been established off-site as well as on-site and mobile vans are available to carry out rapid tests on both staff and residents.

Some lessons have been learned. But the critical issue of not having enough people to do the work remains a major worry if the virus emerges again in long-term care. We’ve seen the result.