You are here: Home / Commentary / So long, Stephen, we knew you too well 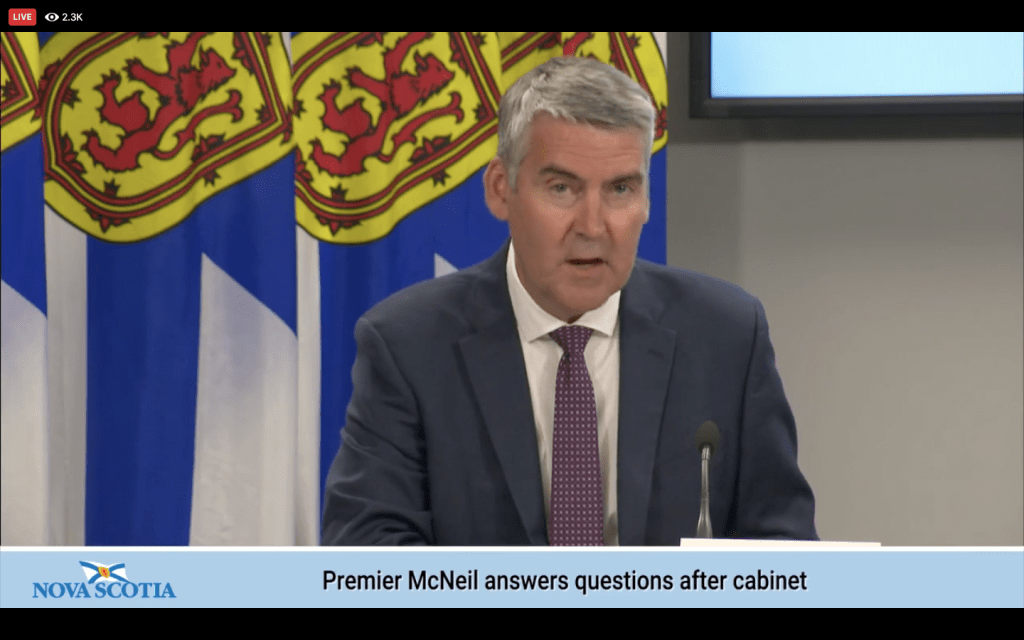 If there has been a singular defining characteristic of Stephen McNeil’s career as premier of Nova Scotia, it is his righteously self-righteous confidence in the rightness of whatever he says is right, damn the consequences, dismiss the naysayers, dump on the media.

Sometimes, that has served him — and us — well.

Start, of course, with “Stay the blazes home,” McNeil’s heart-felt meme-mantra from the early days of the coronavirus pandemic. For a brief uncertain moment in one of our own most uncertain times, we needed a sterner Father Knows Best figure to tell us exactly what to do. McNeil did. We listened. It worked.

That moment came and went. But McNeil stayed the same. As he was, is and always will be.

To be fair — we should always be fair — it wasn’t the only time McNeil’s unfailing confidence in the rightness of his own rightness resulted in a positive outcome.

Consider the Nova Scotia Home for Colored Children. For decades, governments of various stripes had looked the other way at the province’s complicity in the home’s shameful history of physical, psychological and sexual abuse of its young Black residents, and at what McNeil himself would call government’s “institutional and systemic failure to provide care, a failure to meet human needs, and how this failure reflects and contributes to the context of systemic racism.”

McNeil didn’t look the other way. In 2014, he offered a public apology to the home’s former residents. “For the trauma and neglect you endured, and their lingering effects on you and your loved ones, we are truly sorry.” He launched what would become a four-year inquiry that not only resulted in a $34-million settlement for the victims but also changes in government policies and, perhaps most important, a much-praised new vision of restorative justice.

Stephen McNeil deserves credit for that.

Just as he does for last December’s difficult, damned-if-you-do-damned-if-you-don’t decision to say no to Northern Pulp’s demand for yet another extension to clean up its 52-years-in-the-making environmental mess.

In 2015, McNeil’s government had promised the Pictou Landing First Nation he would finally confront what he acknowledged was one of the province’s worst examples of environmental racism. McNeil gave the company five years to stop dumping its pollution-spewing, life-destroying effluent into Boat Harbour. When the company failed to comply and instead played chicken with yet more requests for yet more extensions, McNeil called them on it. It was the right thing to do for Pictou Landing, for Nova Scotia, for our province’s environmental future — even though doing so put at risk more than 2,000 rural forestry jobs.

It is hard to imagine any other premier of our recent acquaintance being prepared to stand up to such a huge company holding so many jobs hostage.

So good for Stephen McNeil. Good for us.

But there have been too many more times when our premier’s prickles have not served us well at all.

Can you recall his government’s dumb-as-a-dustball 2015 decision to end — without a credible alternative — a film tax credit that had helped create a thriving movie and TV industry in the province? That penny-wise, pound-foolish decision decimated a successful industry and forced hundreds of highly skilled Nova Scotia film personnel to seek their, and their families’ futures elsewhere. Without ever acknowledging its own stupidity, his government eventually had to find a backdoor way restore funding, but not before the damage had been done.

Or how about his government’s botched 2016 attempt to increase Pharmacare premiums for seniors? That ultimately forced the premier to issue a rare — though, of course, taxpayer-funded — apology ad.

And let’s not talk about public inquiries. No, second thought, let’s.

In the aftermath of the worst mass murder in Canadian history this spring, McNeil — who has shown himself over the years to be an anti-democratic autocrat or even publicly accountable for his government’s actions — rejected public, expert and family demands for a full, open and transparent public inquiry.

Too expensive. Too slow. Too cumbersome.

But when the massive public outcry following the announcement of a much more limited federal-provincial review finally forced Ottawa and the province to back down and change direction last month, McNeil suddenly claimed he’d been for an inquiry all along. Blame it on the feds, he said.

That Trump-like inability to admit fault appears to be a corollary to McNeil’s default my-way-or-the-highway worldview.

And so — absent a change of heart from McNeil’s successor — we are unlikely to ever get more than the promised secretive, nothing-to-know-here, recommendations-without-context review of the deaths of 53 residents in the Northwood long-term care facility during the coronavirus pandemic.

That in no small measure is because the Nova Scotia Government and General Employees Union has led this call for a public inquiry and, worse, now released its own damning report highlighting problems with the government’s handling of long-term care.

Stephen McNeil, not to put too fine a point on it, doesn’t like unions.

That, of course, is another defining characteristic of our premier. He carried his own small-town, small-business, small-minded, anti-public sector bias with him in his briefcase when he became an elected official 17 years ago, and he seems to have seen nothing in the intervening years to change his mindset.

As premier, he has used up much of his political capital attacking public sector unions. In 2014, for example, he introduced constitutionally dubious legislation to pre-empt the possibility nurses could strike. In 2017, he pushed through Bill 148, which imposed a wage pattern in thousands of government employees, including nurses, healthcare works and public sector workers who’d thought they were still in the middle of bargaining for a new contract. Later that same year, he did it again, this time legislating contracts for the province’s 9,300 public school teachers. And, more recently, he took away Crown attorneys’ right to seek binding contract arbitration when it seemed they might use it.

Do we sense a pattern here?

Some will see those legislative victories as part of McNeil’s legacy, but they seem unlikely to survive ongoing court challenges long enough to serve as much more than examples of McNeil’s bullying approach to those he disagreed with and a leadership style that was always more about dividing than uniting.

Tramping on the public sector, of course, was just part of McNeil’s larger neoliberal agenda, which included tax cuts for business and a much-heralded series of balanced budgets that papered over the reality of our failure to invest in our failing infrastructure or in our own future.

How will Stephen McNeil be remembered? Three years from now? Ten? Fifty?

Crystal-balling is a fool’s game, of course, but my guess is that those who were the beneficiaries of his single-mindedness — the former residents of the Home for Colored Children, the Pictou Landing First Nation— will, rightly, remember him with gratitude for years to come. The rest of us? Not so much. He will have been just one more in the long line of he came/he served/he left (and left no trace) premiers.

We have had more than our share of those.