You are here: Home / City Hall / “Shared responsibility” is the wrong message for safer streets 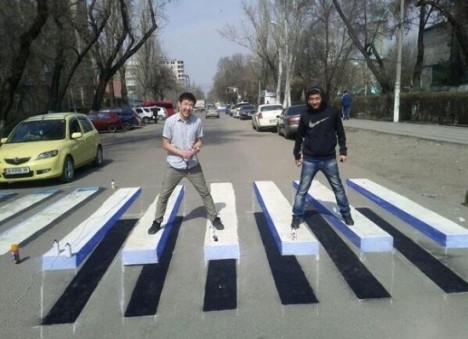 Faux roadblocks are the latest craze in crosswalk safety. This is from China, but the technique has made its way around the world. No word on whether HRM will ever paint one. (Rainbow baby steps, I guess!) From WebUrbanist

If you’re reading this on November 15, 2016, then a very happy Crosswalk Safety Awareness Day to you.

In celebration, the city has launched another round of Heads Up Halifax, its campaign to “help raise awareness about the responsibility shared by drivers, cyclists, and pedestrians when it comes to crossing the street safely.”

As a mandate for a safety campaign, it’s a poor one.

Instead of focussing on reducing causes of injuries or fatalities, it aims to help us see a “shared responsibility” for what happens on our streets.

“Shared responsibility” is not only a red herring, but it actually has the potential to reduce our safety.

But this concept of “shared responsibility” creates an over-simplified impression that there is one type of responsibility, and it’s carved up equally by everyone on the street.

But I’m also responsible to others.

In addition to my responsibility for myself on the street, I am responsible for the safety of everyone I put in harm’s way as I go about my business.

This is where the measure of responsibility between drivers and pedestrians starts to diverge.

Everyone wants it to be equal (sharing is good!), but responsibility for others is not equally shared, because different modes of transportation bring different levels of risk to our public streets.

When I leave my house on my bike, I take on responsibility for my own safety, plus the responsibility for the safety of the pedestrians whose paths I cross. A bike at a high speed, though generally not lethal, can still do damage to a pedestrian. So people on bikes are responsible for not doing this damage.

When I leave the house in my car, I’m responsible for my own safety AND the safety of those people whose paths I cross, be they on bike, in wheelchair, or on foot.

Heads Up Halifax is a safety campaign that essentially embodies the voice of that mom talking to her kid. It’s every man for himself out there, whether you’re a pedestrian or a driver. That’s the message of “shared responsibility.” And it’s not even so harmful for the message it sends to pedestrians (though some would argue it discourages the very healthy and normal act of walking around). It’s harmful for the message it sends to drivers, which is, it’s not all on you.

The scariest thing I did after I was hit by a car last fall was get behind the wheel of my own car. Suddenly I realized that my every move had the potential to do to someone else what an inattentive driver had done to me.

Drivers are the most responsible for the injuries and fatalities on our streets. It’s not only common sense, it’s supported by our own statistics. There were 41 tickets issued to drivers from January to September 2016. There were three issued to pedestrians.

Driving is a huge responsibility, much, much larger than walking around, and our safety campaigns should be hammering that message, not subverting it.

It’s not just our city officials. Our provincial government drank the “shared responsibility” Kool Aid, and that’s why they decided to “level the playing field” on fines for pedestrian and driver infractions. They decided that our responsibility for each other is shared equally, totally disregarding the extra responsibility taken on by people driving cars.

Of course, the other problem with “shared responsibility” is that it ultimately leaves out what is arguably the biggest factor in how safe our streets are: engineering.

Our intersections, sidewalks, traffic lights, and crosswalks are painstakingly crafted by city engineers. Unfortunately for Haligonians, our engineers are working from a rule book that reflects the values of a bygone era, when the car was king, and we decided it needed to move freely, everywhere, at all costs. This rule book is currently undergoing “review” by at least one city staffer, but noone is able to say what’s up for review, how long it will take, or what values will be at play in revising it.

In the meantime, let’s hope that the message of shared responsibility doesn’t embolden those drivers out there with a poor understanding of their actual responsibilities on our city streets, such as they are.