It has been fascinating — but discouraging — watching as Atlantic Gold and the RCMP try to justify the violent arrest of John Perkins at an information session on mine tailings dams and management, which the Vancouver-based mining company hosted last Thursday in the firehall in Sherbrooke on Nova Scotia’s Eastern Shore, a fiasco you can read about and watch on video here.

The first session was full to capacity, with 70 people in attendance. The questions directed at the three tailings experts and Atlantic Gold’s environment and permitting manager, James Millard, showed that many in the audience were concerned about the risks of the proposed mine, so close to St. Mary’s River.

If anything that transpired during that session can be labelled a disturbance of any kind, it would be when one woman repeatedly challenged the panel about the dangers of historic mine tailings in Nova Scotia, citing extremely high levels of arsenic and mercury at those sites.

She was visibly upset, said she had been told she was not welcome to attend, but that she had driven 2.5 hours to get there. She interrupted the tailings experts when they tried to respond to her concerns. Several people in the audience, including Scott Beaver who heads the St. Mary’s River Association (SMRA) and the No Open Pit Excavation (NOPE) campaign that opposes the proposed Cochrane Hill mine, felt her approach was wrong and told her so. She left of her own accord, and was already gone when I sought her out for an interview when the session ended.

The second uncomfortable moment occurred towards the end of the first session, when Atlantic Gold’s COO, Maryse Belanger showed up near the back of the room. Without introducing herself, she interrupted a man in the audience who was asking about acid rock drainage, a common problem with mine tailings and something to which parts of Nova Scotia are prone because of their geology. Belanger chastised the audience for asking questions about “business.” 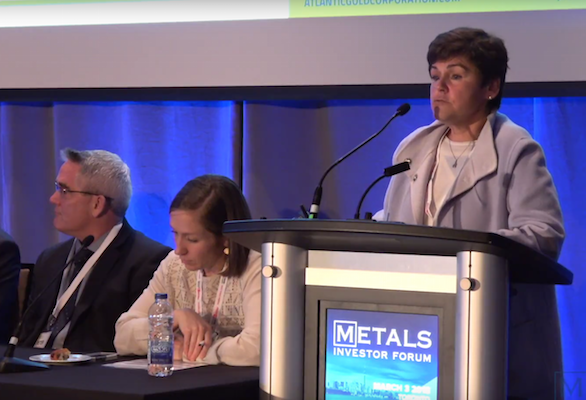 Apart from these two tense exchanges, there was nothing that even remotely resembled a disturbance during the first session, or in the half hour before the second session began. Nevertheless, just as it was about to begin at 5 o’clock, a man approached four people preparing to take their seats at the back of the room, and told them to leave.

The man wore no uniform or identification badge, and refused to say who he was and why he had told four people to leave.

The four were John Perkins and Madeline Conacher of the citizens’ group Sustainable Northern Nova Scotia (SuNNS), Scott Beaver with the NOPE campaign, and me, there to cover the event for the Halifax Examiner. All four had attended the first session, but had chosen to stay — as had others present — for the second as well.

Atlantic Gold’s communications manager, Dustin O’Leary, had said it was fine for people who had attended the first session to stick around for the second, providing there was room. There was plenty — I counted fewer than 25 people in the audience as the second session was beginning.

None of those threatened with expulsion took the unidentified man’s threat to call the police seriously. No one had caused any disturbance. Three had asked questions during the first session, but respectfully.

I had not asked any questions publicly and had spent the first session taking notes on the proceedings.

So we were caught completely off guard when, just after the second session began, the unidentified man came back with an RCMP officer in tow, and directed him to John Perkins.

The man still had not identified himself and refused to do so throughout the entire ugly scene that ensued. Perkins refused to leave, was then told he was being arrested. When he put his hands against the doorjamb, the RCMP officer told him he was resisting arrest and slammed him to the ground, violently handcuffing and taking him into custody. 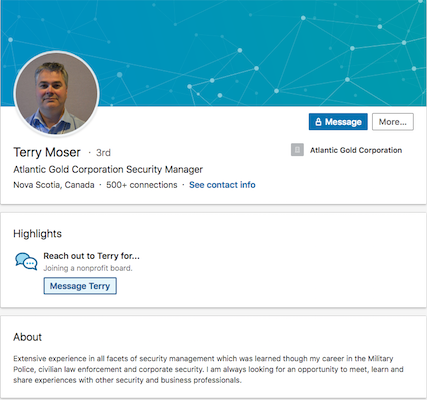 Questioned about the identity of the man who called the RCMP, Maryse Belanger, who was seated at the head table for the second session, admitted that he worked for her, but offered no details.

It was during an online search on Friday, that I learned from his LinkedIn page that he is Terry Moser, Atlantic Gold’s security manager. He describes himself as having “Extensive experience in all facets of security management which was learned though my career in the Military Police, civilian law enforcement and corporate security.”

So that’s how it all went down.

It’s not, however, how Atlantic Gold tried to spin it. Far from it.

On Friday, rather than face questions from journalists in interviews, Atlantic Gold’s communications manager, Dustin O’Leary, chose instead to issue a media statement. 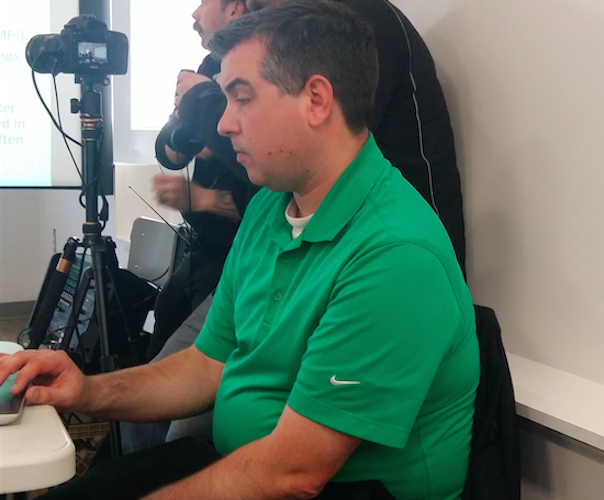 He didn’t send it to all media; although O’Leary knows my email, he neglected to send the media release to me.

The Atlantic Gold statement is not on the company’s website, where all its other press releases are posted.

So I’ve had to rely on other reports by media that did receive the Atlantic Gold statement, such as this one by Keith Doucette of Canadian Press, for the company’s version of why Perkins was told to leave the public meeting. O’Leary’s statement said Atlantic Gold:

In an article in the Chronicle Herald, Aaron Beswick provides this excerpt from Atlantic Gold’s press release:

After three polite requests to leave the meeting, the individual was informed that the RCMP would be called to escort them from the premises.

An RCMP officer then invited the individual to leave the building for a discussion, however, this person refused and became confrontational with the officers [sic] and was subsequently taken into custody and charged with trespassing and obstruction.

And in her coverage of the event, CBC’s Francis Willick used this quote from Atlantic Gold:

We respect people’s right to protest, however, they must be respectful, follow the law and avoid belligerent and disrespectful conduct. Nevertheless, the incident is unfortunate and regretful. Our company is committed to open, transparent and respectful dialogue with residents in and around our projects.

I’m going to try to count the ways that all these claims by Atlantic Gold are either highly misleading or downright inaccurate (to use a polite word): 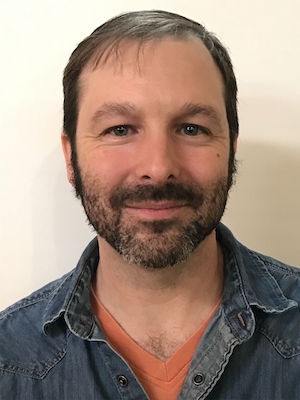 Seeking clarifications on the inaccurate claims and incomplete account of the incident in his media release, I sent Atlantic Gold’s communications manager a list of questions. O’Leary’s reply is identical to the ones I have received every time I have sent him questions:

Thank you for your inquiry. At this time, Atlantic Gold has elected not to participate in the article you are writing.

The RCMP also issued a statement on Friday:

At 5 p.m. on May 23, Sherbrooke RCMP responded to a 911 call indicating police assistance was required at a public meeting due to several persons causing a disturbance. An RCMP officer attended where a man was identified as one of the persons responsible. Despite repeated warnings to leave, the man refused and then resisted the officer’s attempt to arrest. The man was eventually controlled, handcuffed and later released without charge.

This shows that Atlantic Gold was asking for RCMP assistance at what it called a “public meeting.” Yet a very few moments after the police officer arrived and began manhandling John Perkins, Dustin O’Leary was trying to say it was now a “private meeting,” as can be heard 45 seconds into this video [a warning that it contains violence].

Questions also need to be asked about the Atlantic Gold security manager’s decision to dial 911 to summon the police, a number that is to be used strictly for emergencies. Nova Scotia’s Emergency 9-1-1 Act states that:

No person shall use or permit another person to use the telephone to place a false, frivolous or vexatious call to the number “911”.

In an email, I asked Corporal Jennifer Clarke, public information officer for the force, why the RCMP would put this erroneous claim in an official press statement, when there were clearly not “several people causing a disturbance.” She replied:

The quote I provided is based on the information the responding RCMP officer received from our dispatcher.

I also asked Corporal Clarke why the RCMP officer did not come into the firehall and first assess the situation for himself, ask the audience if there had been any disturbance, before trying to evict the person who was then arrested. Clarke’s answer:

I cannot provide comment on the reason for the actions taken by the police officer, but I can say that the individual who was arrested is welcome to make a complaint to the RCMP if he has concerns about the incident.

Clarke is referring to John Perkins, who wants to do far more than merely lodge a complaint with the RCMP. Perkins, who told me he is still feeling shaken, said he is currently exploring all his options.