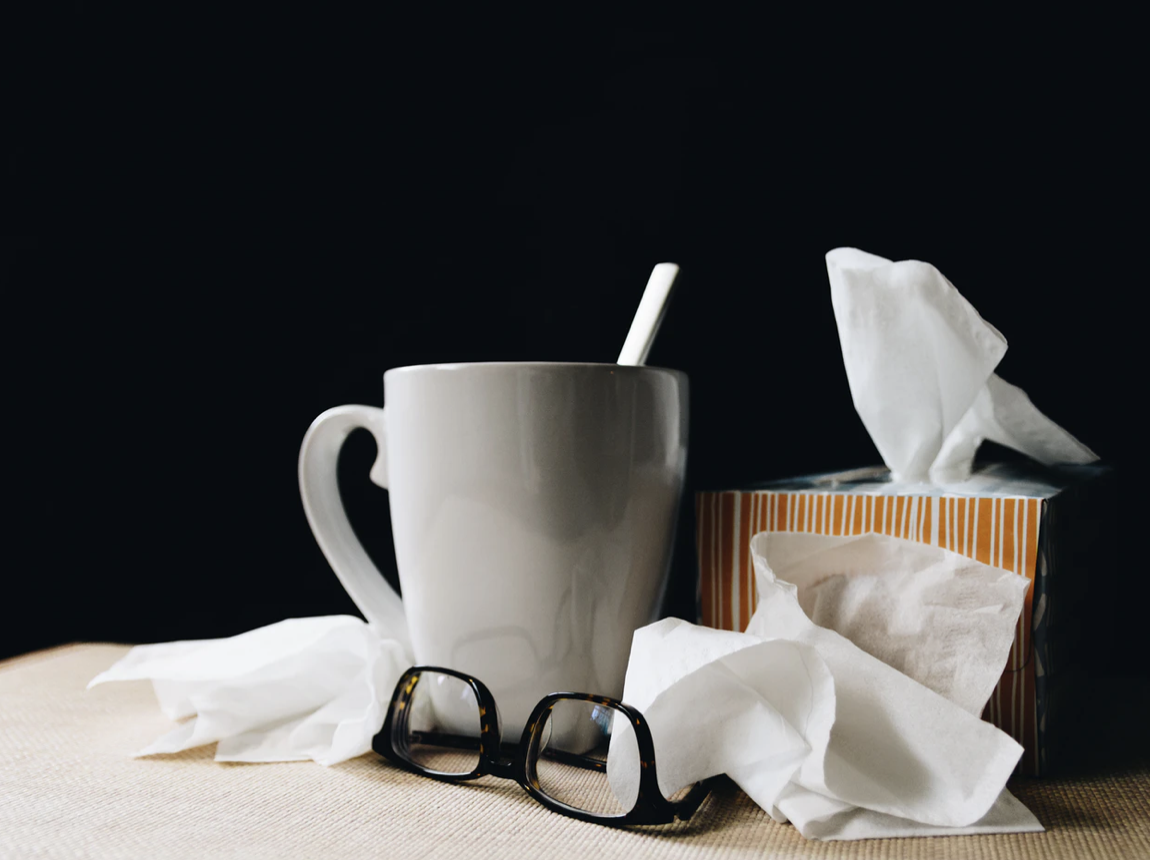 Titled ‘No Nova Scotian Should Have to Work Sick: The Urgent Need for Universal and Permanent Paid Sick Leave Legislation,’ the report was released today by the Canadian Centre for Policy Alternatives-Nova Scotia (CCPA-NS).

The authors are calling for legislation that would provide workers 10 paid sick days per year funded by employers. This would give workers time to access “preventative health services,” to recover from common illnesses like colds and flus, and to care for sick family members. The minimum number of paid sick days jumps from 10 to 14 in the event of a pandemic.

“Advocates argue that in order to improve public health, reduce gender inequality, and improve working conditions for the most precarious and marginalized, workers should have access to a minimum of seven, but ideally 10, paid sick days,” states the report.

Authored by a team of Acadia University researchers using data from official government statistics and from a study conducted at the university, the report found that before the pandemic, only 46% of Nova Scotia workers had access to paid sick leave provided by their employers.

The authors say lack of access to paid sick leave has been “a serious and longstanding problem” for Canadian workers, adding that the impact of COVID-19 has intensified calls for paid sick leave from labour unions and organizations like the Nova Scotia Federation of Labour, medical and public health professionals, and municipal governments.

“As we begin to emerge from the pandemic, there is an important opportunity to build on temporary policy gains in order to secure permanent rights for workers,” the report notes. 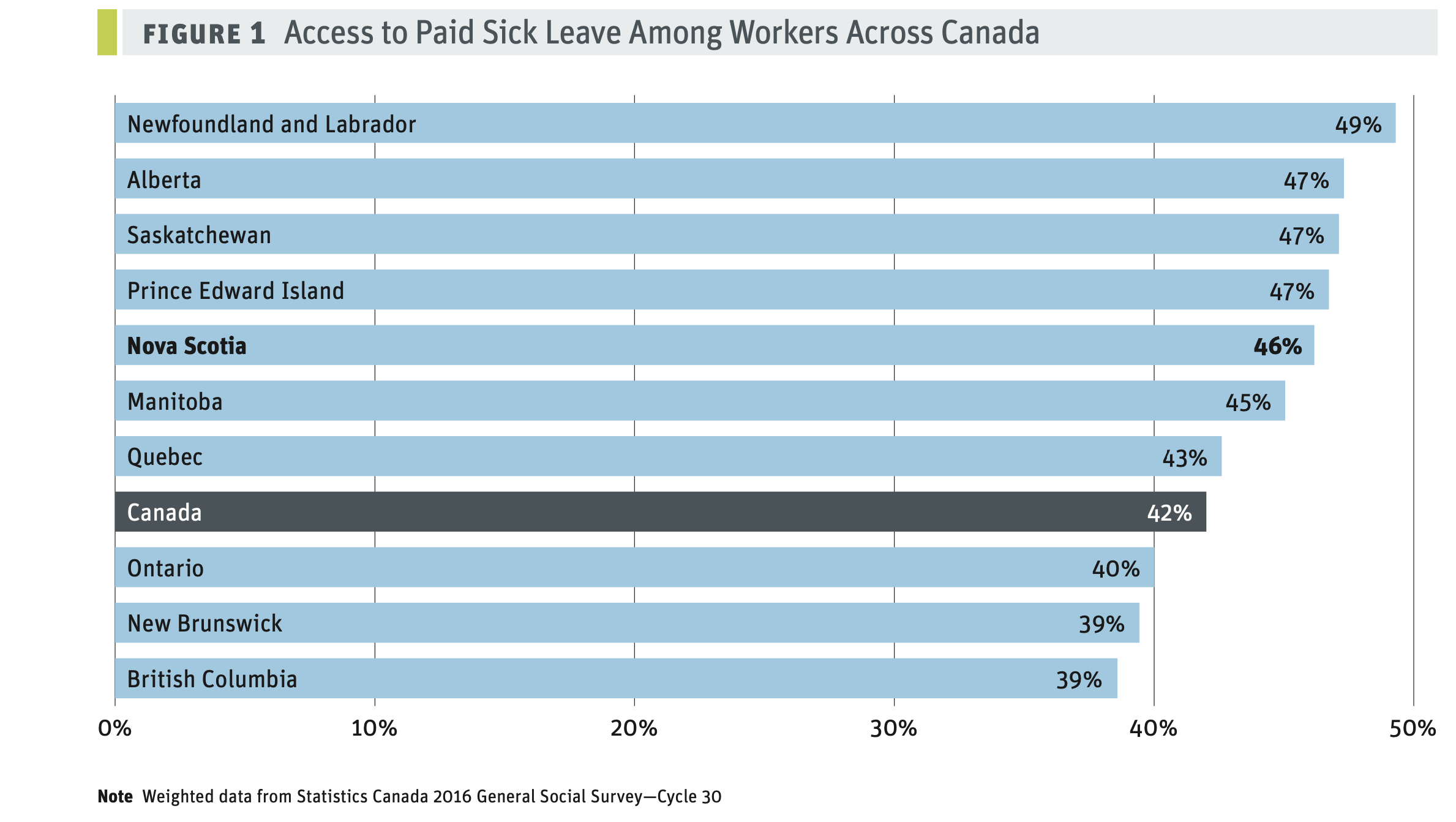 Katie (last name withheld) is in her thirties. She currently works in customer service, but recently had jobs in the retail and tourism sectors. The Halifax resident said in her experience, very few jobs provide paid sick leave.

“I have only ever worked one job — in childcare — that offered a lump sum of paid sick days for the year. Other than that, taking time off to recover has meant lost wages, and often difficult financial situations,” Katie said in an interview.

“It’s a vicious circle. You cannot afford to — or are not allowed to — take time off to get healthy, which compounds the situation. It can operate on a small scale — a never-ending cold — or on a much larger one — permanent damage to your body by your thirties.”

With the prospect of losing a shift creating more stress than the immediate pain and discomfort of an injury or illness, Katie said she’s seen people working with broken ribs and while sick with strep throat, stomach flu, and far worse.

“It’s upsetting to say the least,” she said.

Although Katie was fortunate to find a work-from-home customer service job when the retail store where she used to work closed permanently during the pandemic, she has heard “horror stories” from friends who continued to work in retail. While she doesn’t specifically get paid sick days at her new job, she does get paid time off.

She applauds the idea of legislating employers to provide 10 days paid sick leave per year.

“While it would not necessarily affect my current situation, it would be absolutely life-changing for so many working Nova Scotians,” Katie said. “With our current minimum wage in such a pathetic state, missing even a single shift can be devastating.”

Katie said she can only imagine factoring children into the mix would make things that much worse. She believes paid sick time would provide a “small but crucial” safety net for many families.

“If you can’t see why that is the case, you need to look at the world beyond your own,” she said. “There’s so much work to be done, but this small step in the right direction could make all the difference.”

‘We’re not out of the pandemic yet’

In this province, the program was implemented on May 12 and expires this Saturday, July 31. It provided four paid sick days at $20 an hour to a maximum of $160 per day and a maximum of $640 over 12 weeks.

The report’s authors note that while comparable with COVID-related paid sick leave policies implemented in other Canadian jurisdictions, the N.S. program is the shortest in duration. The other four provide coverage until the end of September, with B.C. extending it until December. 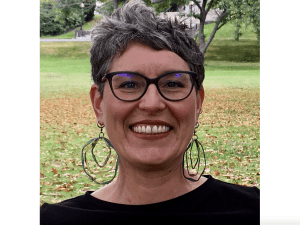 “We’re not out of the pandemic yet, and we certainly aren’t going to flip the switch and all of a sudden say, ‘Hey, now it’s OK if you’re forced to make the choice between going to work while you’re sick or getting a paycheque.’ That didn’t end just because the pandemic is hopefully winding down.”

The report highlighted that looking at the most recent available data, only 26% of workers between the ages of 15 and 24 in the province have access to paid sick leave. Only 42% of people with a high school education (or less) get paid sick leave.

When it comes to people working seasonal, casual, on-call and term jobs, only 28% can count on paid sick leave. Workers with permanent employment were more likely to have access to paid sick leave (49%).

“It’s really the people who are struggling the most, the most marginalized, in the most precarious positions who are going to be more precarious if they get sick.”

Acadia University researchers preparing the report used data collected as part of their survey examining worker health and well-being during the pandemic’s first wave in N.S.

Although it focused on three groups of essential workers — retail workers, long-term care workers, and teachers — the report’s authors believe the data provides “important insights” about access to and use of paid sick leave “that can help inform policy discussions.”

Among unionized long-term care workers, 94% had paid sick leave compared to 88% of those who were non-unionized.

“An important finding from both the government data and from our study is that unionized employees are more likely to have paid sick leave,” Brickner said.

The report found that among retail workers who didn’t have access to paid sick leave, 41% said they went to work when they were sick. Of those workers, 88% said they did so because “they needed the money.”

The report’s authors provide six recommendations/principles that should be included in a legislated paid leave policy. They said it must be universal, paid, adequate, permanent, accessible (no doctor’s notes/barriers), and employer-provided.

Although some Nova Scotia employers do provide paid sick leave, Brickner said the public should not have to absorb the cost as is currently the case with the government-subsidized pandemic paid sick leave.

“If it’s important for the worker to be able to go to work healthy and the employer benefits from that, then…the employer shouldn’t then pass that (cost) onto the public,” Brickner said.

Brickner said another interesting finding from the federal government data was that only 49% of workers in firms with more than 100 employees have access to paid sick leave.

“It’s not the case that it’s the smaller firms that are really, really struggling to offer paid sick leave while the larger firms are doing just great,” she said.

“It’s kind of across the board.”

“We’re in a moment where we can make some real choices,” she said.

“We can make a decision as a public and say, ‘No, we’re on the right track now. Let’s keep it going,’ and actually provide the kind of legislation that’s really going to protect our workers and in protecting workers also contribute to better public health.”