You are here: Home / City Hall / Province to pitch in $1.8 million over 20 years to cover deficits from Halifax’s affordable housing projects 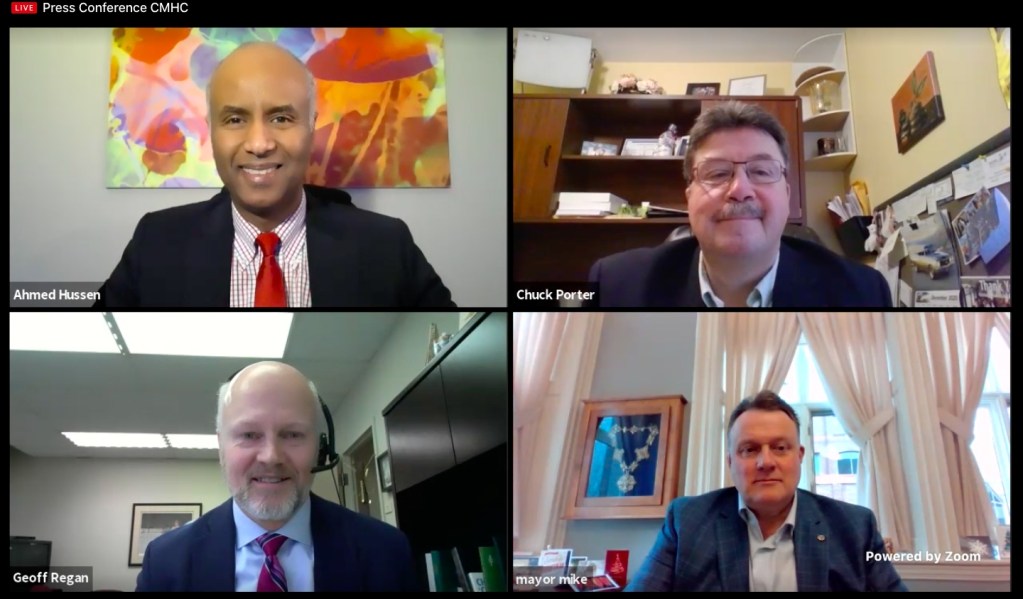 With great fanfare and little detail, the provincial government announced on Monday that it will spend $1.8 million over 20 years, supposedly to cover the municipality’s expected share of operating costs for more than 50 units of federally-funded affordable housing.

The federal government announced the $1 billion Rapid Housing Initiative in October. Half the money went directly to major cities, including Halifax, which received about $8.7 million.

Halifax regional council voted last month to direct the money to three nonprofits to create 52 units of affordable housing within the next year. The Mi’kmaw Native Friendship Centre, Adsum Women and Children, and the North End Community Health Centre will share $8,083,213 from initiative, with Halifax holding onto $576,314 for contingency.

But Porter also announced $1.8 million in new provincial funding “to help with the operations over the next number of years.” In a news release, the province said it will “contribute more than $1.8 million to help ensure three projects are sustainable over the long term.”

Savage said Porter’s “willingness to jump in and provide provincial support on this project made the project much more manageable.”

“You’ll recall that the Province of Nova Scotia committed to cover any deficits for the three projects that council supported under the major cities stream,” Dubé told councillors. “That was an estimated $1.8 million over 20 years.”

When the Halifax Examiner asked for more details during the news conference, neither Savage or Porter had them.

“One of the issues that government has always been pretty good at is giving money to build something and then not so good sometimes at taking care of it,” Savage said.

Porter said the $1.8 million would be used for operations over the next 20 years — the minimum time the three nonprofits are required to keep their units affordable under the Rapid Housing Initiative. As a comparison, the provincial government just granted two nonprofits $1.7 million to operate 40 shelter beds for one year.

“It is always the long-term maintenance of operations that cause us the most concern,” Porter said.

The Halifax Examiner asked the spokesperson for the Department of Municipal Affairs and Housing for more detail. We’ll update this post when we get it.*

But in an interview with the Examiner, Sheri Lecker, executive director of Adsum Women and Children, said the money goes to the city, not to the nonprofits. Lecker wasn’t told about the funding before Monday’s announcement, but sought details from the province afterward.

“The money that was announced by the province is to go to the city for the city to cover shortfalls or gaps over the coming 20 years if the operating expenses for all the new housing units that come online, if the rents are so low that they don’t actually cover the operating costs,” Lecker said.

Lecker said as part of its submission for the funding, Adsum built a budget based around rents, inclusive of heat and utilities, equal to 30% of provincial income assistance rates. Those rates haven’t seen a meaningful increase in more than 20 years, and they’ve actually gone down when inflation is factored in.

Adsum is building three-bedroom units as part of its project under the Rapid Housing Initiative. They’ll rent to people on income assistance for $357 — heat and utilities included.

Not all of the tenants will be on income assistance, but none of them will pay much rent. As another example, Lecker said seniors receiving their Canada Pension Plan, CPP, might get $900 a month total. Adsum would charge them $270 for rent.

All those low rates mean Adsum will be operating at a deficit — and under the Rapid Housing Initiative agreement, the municipality will have to cover it.

“We are showing a loss every year,” Lecker said. “And so you could say, will this $1.8 million, divided by three organizations, cover that loss? And I would say, ‘Yeah, but there are a ton of things that aren’t here.’ There’s no staffing … Nobody else would be expected to model their housing this way.”

In building the budget for the new housing over the next five years, Adsum wasn’t able to include the cost of its support staff and factored in a smaller than usual reserve fund.

The province could change this situation.

“The only reason the deficits exist is they will not raise the amount that people can spend to live in dignity,” Lecker said.

“They could affect the change not just for us and our projects, but for everyone else who has to struggle and try to subsist on income assistance rates.”

“$1 million is going to HRM to be used to support operations over 20 years for Adsum and the North End Community Centre RHI projects. The Mi’kmaw Native Friendship Centre will receive $832,000, via HRM, to support capital costs of their Rapid Housing Initiative project.”