You are here: Home / Featured / Province no longer paying for hotels for Halifax homeless shelter residents 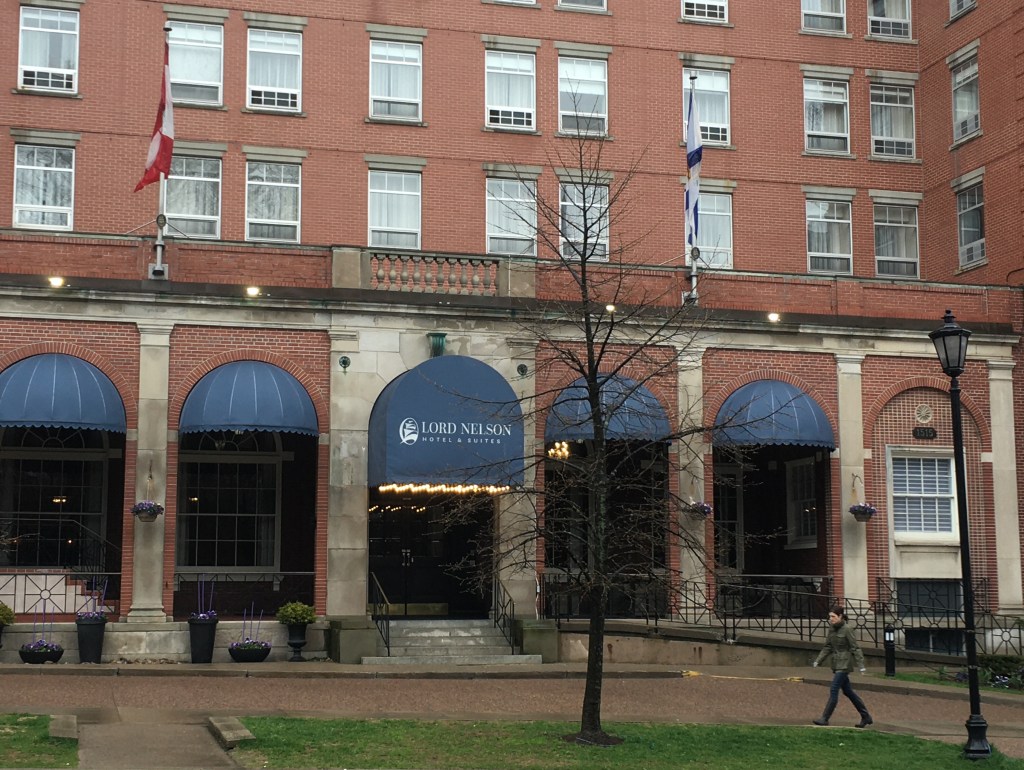 The Lord Nelson is one of three Halifax hotels being used to house the formerly homeless. Photo: Halifax Examiner

The provincial government has stopped paying for hotel rooms for dozens of people who were moved out of a temporary homeless shelter last month following a confirmed case of COVID-19. And while federal funding is now covering the bill, the local association tasked with doling it out says the money will only last till the end of June.

In late March, the provincial and municipal governments opened two pop-up shelters in municipal buildings to reduce the number of people in the permanent shelters. Then in early April, 20 people were moved into a hotel from the Out of the Cold shelter because it was impossible to maintain social distancing in that shelter’s space.

On April 23, there was a confirmed case of COVID-19 in one of the pop-up shelters. The infected person was quarantined, and everyone else in that shelter was moved into a hotel — about 35 people. For 10 days, the provincial government covered the cost.

“When the quarantine period ended, the province said it wouldn’t pay for the hotels anymore,” Jim Graham, executive director of the Affordable Housing Association of Nova Scotia (AHANS), said in an interview Thursday.

“They’d all have to go back to the shelter. At that point, the decision was made by AHANS … that those people were safer where they were, in the hotel.”

There are now more than 100 people in rooms spread across the Lord Nelson Hotel in downtown Halifax and two other undisclosed hotels.

Graham said AHANS is using federal money, from the Reaching Home program, to pay for the hotel rooms, food and support staff. That funding is typically used for housing programming and the federal government has lifted some restrictions on its use during the pandemic. About $1.5 million was allocated for the Halifax area, and AHANS is tasked with administering it.

“At the end of June, we will be out of money,” Graham said.

“We’ve already served notice to the province that that’s the situation. They know that’s what’ll happen.”

And if anything changes for the worse, the funding won’t last even that long.

“Heaven forbid we get a positive case in another shelter, all those folks have to go to a hotel. Is the province going to pay? I don’t know,” Graham said. “Will they move them all back to the shelter and expose them to risk again? I don’t know.”

Graham was also working on Thursday to arrange for 23 immunocompromised people in three different hotels to be moved to one to allow for better support staffing. The provincial Department of Community Services is currently paying for those rooms, but Graham wasn’t sure it would continue to do so after May if they moved.

As talk begins to swirl around loosening up restrictions, sheltering people won’t get any easier.

“I guess our fear would be that the last thing that’s going to loosen up is the requirement for social distancing, and you can’t social distance in a shelter,” Graham said.

“Best practice across the country seems to be, get these folks out of the shelter … Lots of folks are doing this in quite a different way than we are.”

The Halifax Examiner asked the provincial government why it’s no longer paying for those rooms, what happens if there’s another positive case, and what its plan is to keep the city’s unhoused population safe as restrictions loosen.

In an email on Thursday, Department of Municipal Affairs and Housing spokesperson Krista Higdon said the government has been “working with our community partners, public health officials, municipalities and the federal government to protect people experiencing homelessness from exposure to COVID 19.