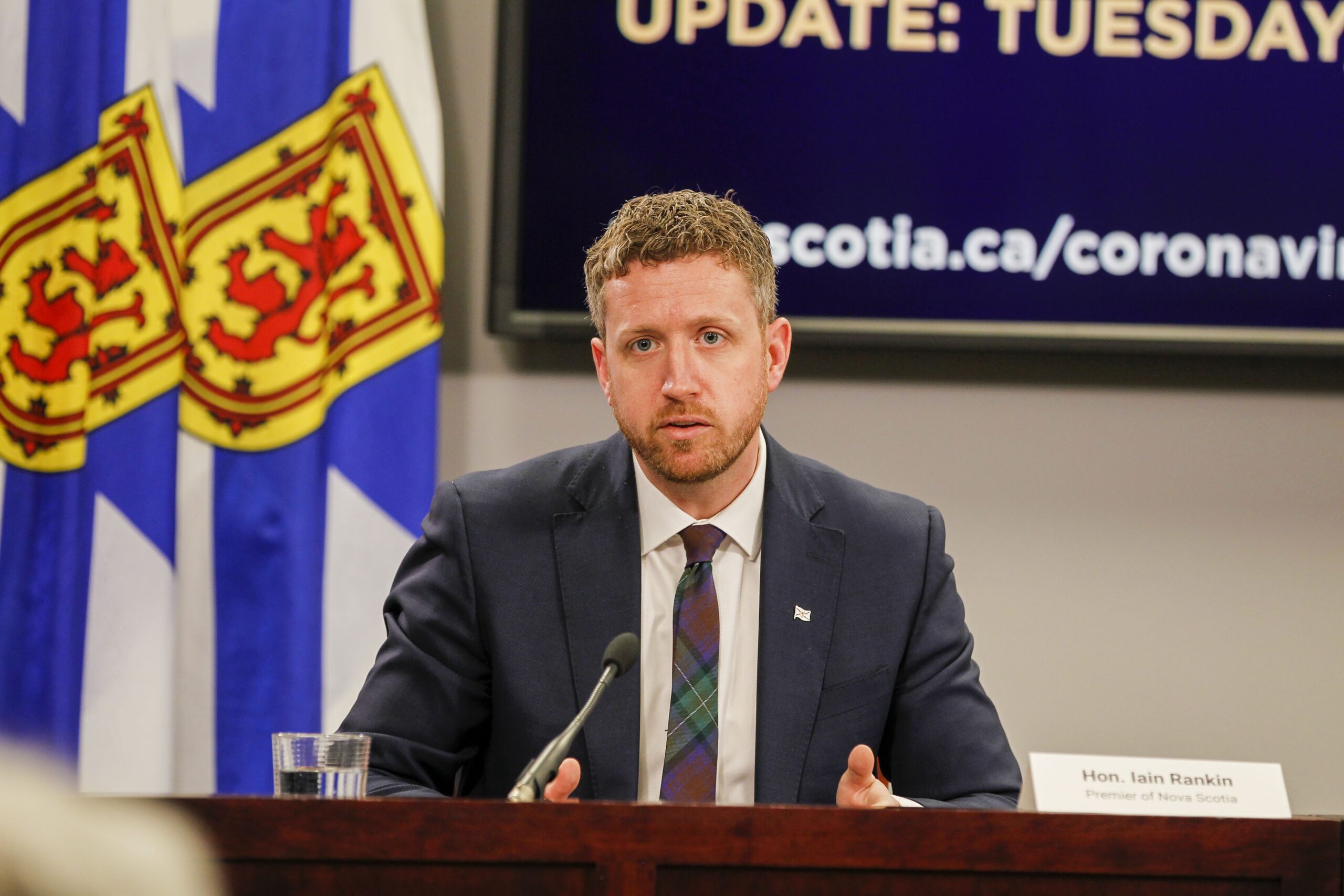 Just before yesterday’s COVID briefing, Extinction Rebellion members demonstrated at Department of Lands and Forestry offices around the province, and as well at One Government, where Premier Iain Rankin’s office is located.

At the briefing, Examiner editor Tim Bousquet asked Premier Iain Rankin about the demonstrators’ concerns, and about the proposed Goldboro LNG plant:

Bousquet: It’s impossible to miss that there was just a large demonstration or at least a loud one before the meeting. As I understand it, the folks demonstrating are upset that the Lahey recommendations haven’t been implemented and they call it “talk and log,” and that the Biodiversity Act has been gutted. What do you say to people who say that you’ve simply caved to the big forestry companies?

Rankin: So I did go up and get the letter and I haven’t read it yet. Just before entering the room, I’ll have a look at it. And I listen to all views on this matter. I’ve been the minister in the past and I know that there’s been some challenges getting through different recommendations, but some recommendations actually have been implemented. We actually just fulfilled another one by introducing the Crown Lands Act, first time getting into the legislature. We brought that in. That’s a foundational piece. We’re going to continue to implement the report. The report does not ask for a moratorium on clearcutting, nor does it actually recommend eliminating clearcutting. So I think that for those that are really interested in evolving to ecological forestry, they should read the report and they should go over the different aspects that actually allow us to get to ecological forestry by working together and by sustaining the industry in the long run.

Bousquet: I’ve asked you previously about the Goldboro LNG plant proposal. In the wake of that conversation, some people who have expressed their democratic opposition to the plant were sent letters basically threatening them with legal action for expressing their democratic right to speech. Will your government support and introduce anti-SLAPP legislation [laws that prohibit companies from filing so-called “Strategic Lawsuits Against Public Participation] to prevent these kind of cases?

Rankin: I think that the democratic process should allow for that type of criticism, protest. I think that’s all healthy to democracy. We can look at legislation, but I haven’t really reviewed what that would mean. But I think that sometimes conversations need to happen when there’s projects like this and there’s going to be different views, different opinions on matters of this magnitude. But we do need economic development in the province. We do need better laws to protect the environment. I think we can do both. I’ve ran on a platform that respects the way that we grow the economy, that uses our natural resources. But I think there’s a lot of work we need to do to ensure that they’re utilized more sustainably. That speaks to forestry, that speaks to energy. And I have a commitment and I’m going to meet my commitments to getting off coal by 2030, of reducing clearcutting, ensuring that we have industry for the long run in this province. And I think that Nova Scotians, by and large, want to see both, action on both files.

“Words are important and we think this is a meaningful change,” said Burrill. He then went on to question Rankin about his previously stated support for the LNG project, which would make it impossible for Nova Scotia to meet its greenhouse gas (GHG) reduction targets — the plant by itself will mean that Nova Scotia will exceed its 1990 level of GHG emissions, while the provincial target is a 10% reduction from those levels by last year.

Burrill: In order for titles to be more than just for show, they have to flow from a consistent framework. It is difficult to see much consistency when this premier has indicated his support for the Goldboro LNG project, a project that would, as one expert put it, blow a hole through Nova Scotia’s emissions ceiling. Will the premier admit that his support for this LNG project is inconsistent with Nova Scotia’s greenhouse gas emission reduction goals?

Rankin: “We on this side of the House believe that we can grow an economy and protect the environment at the same time. We have committed to a number of environmental platform pieces that will continue to reduce greenhouse gas emissions. We introduced cap and trade, which the members opposite voted against. We introduced programs that will continue to reduce emissions, modernize our transportation, and continue to protect more land in the province so that we can sequester more carbon. I do support economic development in the province.”

After Question Period, Bousquet asked Burrill whether the NDP would support or even introduce anti-SLAPP legislation. Burrill said he couldn’t recall, but he believed that such legislation is in the party platform, and said he would be open to visiting the issue.

Will the real Mr. Bishop please stand up?

Jeff Bishop, the executive director for Forest Nova Scotia since 2013, was one of 12 volunteers appointed yesterday to the Round Table on the Environment and Sustainable Prosperity.

The 15-person group advises the premier and the minister of Environment and Climate Change on protecting the environment and how that links with strengthening the economy and supporting social goals. The advisory group has not met for two years because the government has not acted to fill the vacancies.

Claudia Chender, the NDP Member for Dartmouth South, sits on the legislature’s Human Resources Committee, which approves appointments to government Agencies, Boards, and Commissions. Chender noted the world is grappling with a climate crisis and said she was “pleased” to see the government finally make the appointments.

However, Chender questioned the choice of Bishop to sit as a member of the Roundtable. Bishop is an employee of Forest Nova Scotia, which waged an expensive and effective ad campaign across the province to persuade voters to call their MLA and request changes to the proposed Biodiversity Act — which under “emergency” circumstances would have allowed the province to restrict some uses of privately owned land to protect endangered species of plants and wildlife.

The emergency circumstances had not yet been spelled out in regulations, and Forest Nova Scotia used that ambiguity to sow doubt and mistrust among private landowners. On Monday, the Law Amendments Committee, of which Chender is also a member, voted to kill almost half the proposed Biodiversity Act and restrict it to Crown lands.

“I think one of the themes that came forward in that conversation is the influence certain industry and lobby groups have on government policies and priorities,” said Chender. She noted Law Amendments heard from a diverse group of landowners — some of whom were skeptical of the Act as well as landowners who considered themselves ecologists and sustainable foresters. 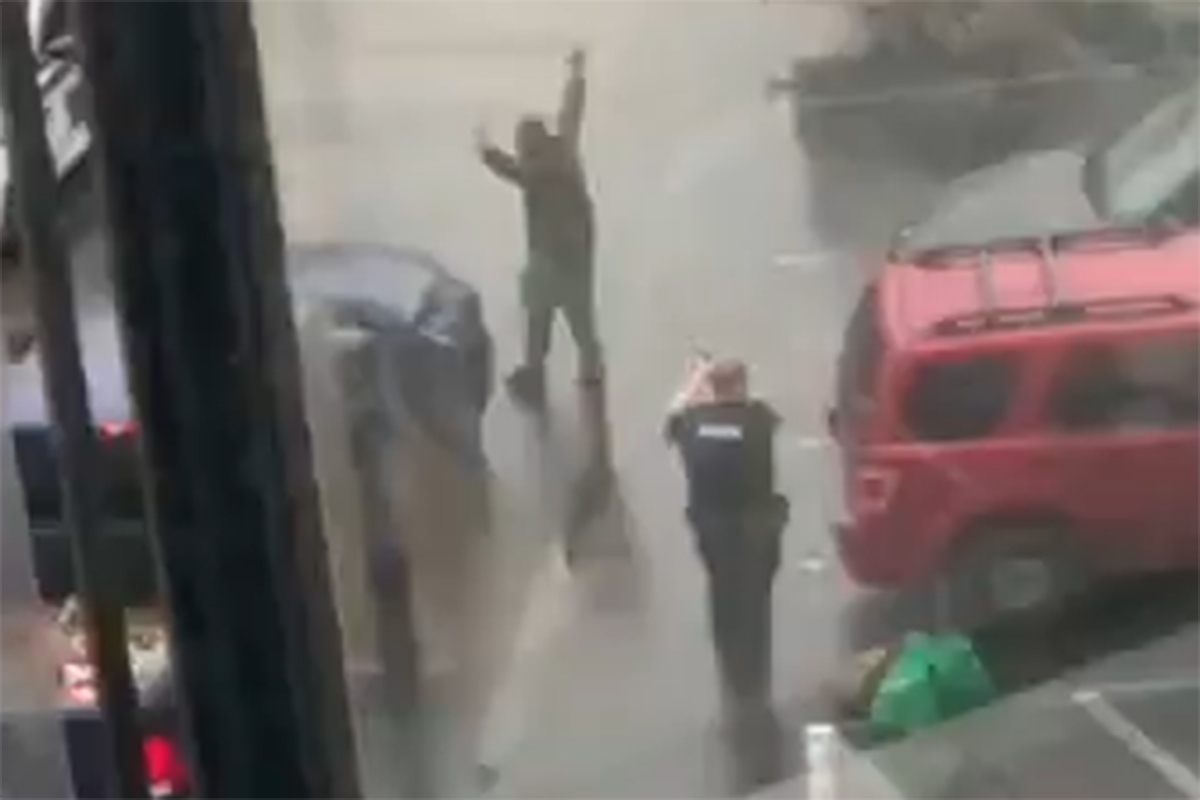 A still from the video of a Halifax Regional Police officer threatening to shoot a Black man. — DeRico Symonds/Twitter

Dartmouth North MLA Susan Leblanc thinks the Serious Incident Response Team (SIRT) ought to look into the behaviour of an HRM policeman last Friday (caught on cellphone video) who drew his gun and taunted/threatened to shoot a Black suspect if he ran from the scene. The police officer has been placed on administrative leave while the local police force looks into what happened. SIRT can’t investigate unless it receives a complaint.

Leblanc: “Will the premier be directing the minister of Justice to refer this incident to the Serious Incident Response Team for an investigation?”

Rankin: “I think it’s important to allow that (local) investigation to take place. I did speak to the minister of Justice to discuss what our options are and we will continue to have those discussions.”

Progressive Conservative leader Tim Houston challenged the premier and the Minister of Health to explain how a budget that boasted the most money ever for mental health services actually saw its allocation as a percentage of the total health budget decline from 6.7% last year to 6.3% for 2021-22.

Houston: “How do you justify spending less on mental health?”

Rankin: “We are spending $20 million more on mental health and establishing a new Office for Mental Health and Addictions.”

Health Minister Zach Churchill: “Last year we hired over 35 clinicians. This year we do have the largest mental health budget the province has ever had. The overall percentage has dropped marginally and that’s because of the major dollars going into COVID-19 vaccination and our long-term care facilities — which I believe is close to $400 million between them.”

Far less controversial was the appointment of a new chair for the Board of Nova Scotia Health (formerly known as the Nova Scotia Health Authority). Nova Scotia Health employs 23,000 people in the province and the board chair is the top governance position. Janet Davidson has been appointed to replace Frank Van Schaayk who has served since 2018.

Davidson’s name may sound familiar. She filled in as acting CEO of the Health Authority immediately after Janet Knox retired. Davidson oversaw the de-centralization of the large health bureaucracy into four regions or “zones.” Davidson is a nurse by profession who has retired to Nova Scotia after a career that includes working as deputy Health minister in Alberta as well as top health administration jobs in both Ontario and B.C.

Also appointed as volunteer directors to the Nova Scotia Health Board are OmiSoore Dryden, an associate professor in the Department of Community Health and Epidemiology at Dalhousie University and also the James R. Johnston Chair in Black Canadian Studies. Gary Osborne is the chief financial officer at Chorus Aviation Inc. Jacquelyn Thayer Scott is a former president and vice-chancellor of University College of Cape Breton and Dr. Rex Dunn is a surgeon with 40 years experience who works in the Eastern Zone. 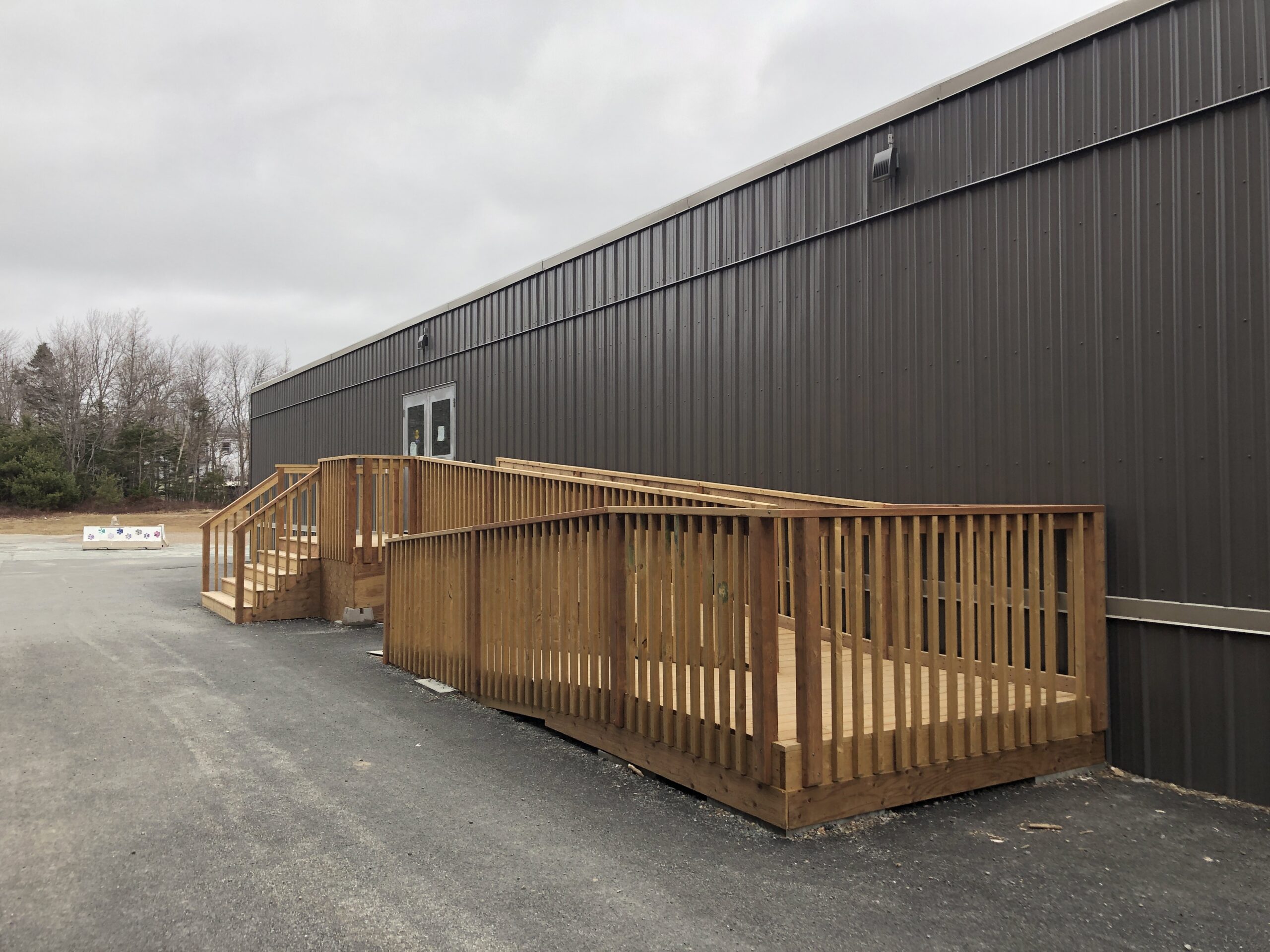 The population of Halifax is growing and schools in the Fairview-Clayton Park-Bedford area are bursting at the seams. The government has announced 47 modular classrooms will be purchased and built at the following schools:

Modular classrooms are different from portables because they can be connected by a hallway to the school and they have washroom facilities within the structure, a good thing during a pandemic. The price tag is $24 million and will be shared between the federal and provincial government because the expenditure qualifies under the COVID Resilience program.

With files from Tim Bousquet.