About 200 people gathered at Victoria Park in Halifax at noon Monday for a general strike intended to draw attention to demands for a public inquiry into the Nova Scotia mass killing.

The event was slated to run from noon to 12:22, a 22-minute strike to pay homage to the 22 people whose lives were taken during the weekend of April 18-19.

“This is something that all sectors of society have asked for,” Martha Paynter, founder and coordinator of Women’s Wellness Within, told reporters before the event started.

Her organization works for reproductive justice, prison abolition and health equity. It was one of several feminist community activist and advocacy groups behind Monday’s ‘Strike back: Demand an inquiry’ event. 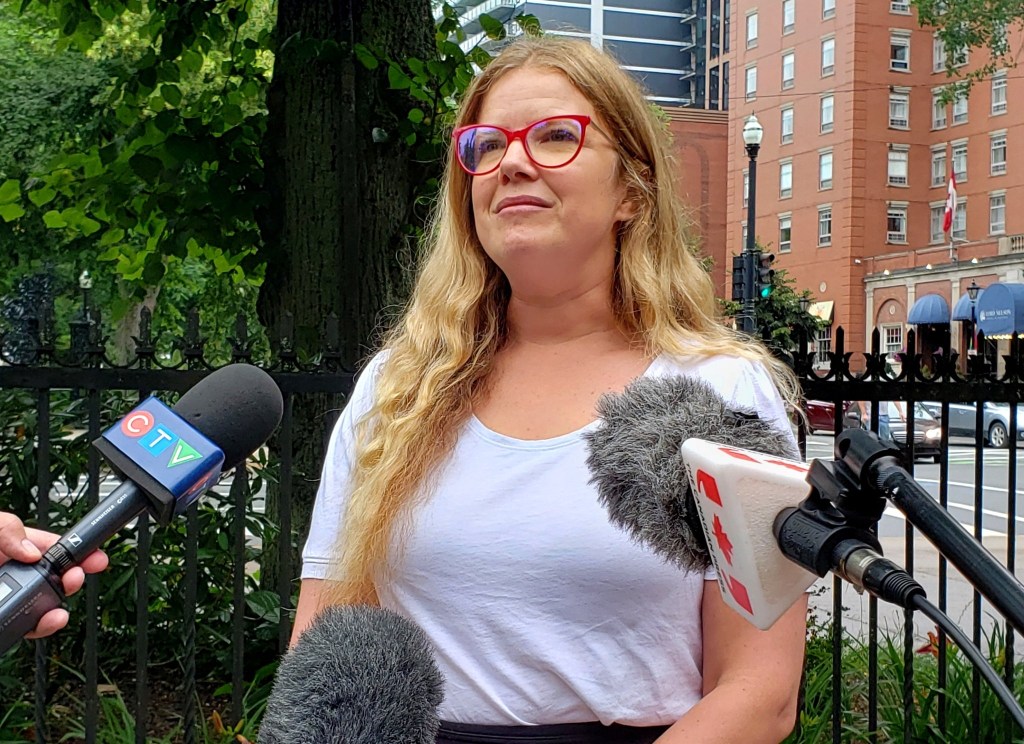 Martha Paynter, founder and coordinator of Women’s Wellness Within, speaks with reporters before Monday’s 22-minute event to draw attention to demands for a public inquiry into the Nova Scotia mass killing. — Photo: Yvette d’Entremont

“This is really a minimum response to the largest massacre in Canada in our lifetimes and it’s required to even begin to deal with the trauma this province has experienced,” she said.

On Thursday, the provincial and federal governments announced a joint independent review would be conducted into the tragedy rather than a public inquiry. That’s what victims’ families, national women’s organizations, senators, and many others had asked for.

Condemnation of the decision was swift. A petition started Thursday night demanding a public inquiry into the tragedy already has more than 14,000 signatures. The Facebook group ‘Nova Scotians for a Public Inquiry’ was started around the same time and already has 15,000 members.

Halifax resident Sylvie Boisvert was one of the people who attended Monday’s event. In an interview in French, she said she felt compelled to support the families and their united call for a public inquiry. Boisvert described the decision to hold a review instead of a public inquiry as “horrifying” and adding further heartbreak to the families of the 22 victims.

“When they announced this last week it was like when a company says, ‘We are reducing our hours of service to better serve you.’ I had the impression that they (government) think we’re a bunch of idiots,” Boisvert said.

“They want to make it look like they’re doing something, but in reality it’s all hidden and we know nothing will come of it. Since all of this happened, I have felt much less safe and I’ve lost all confidence in this government … I am heartbroken that on top of everything else, these families now have to fight for what should be obvious.” 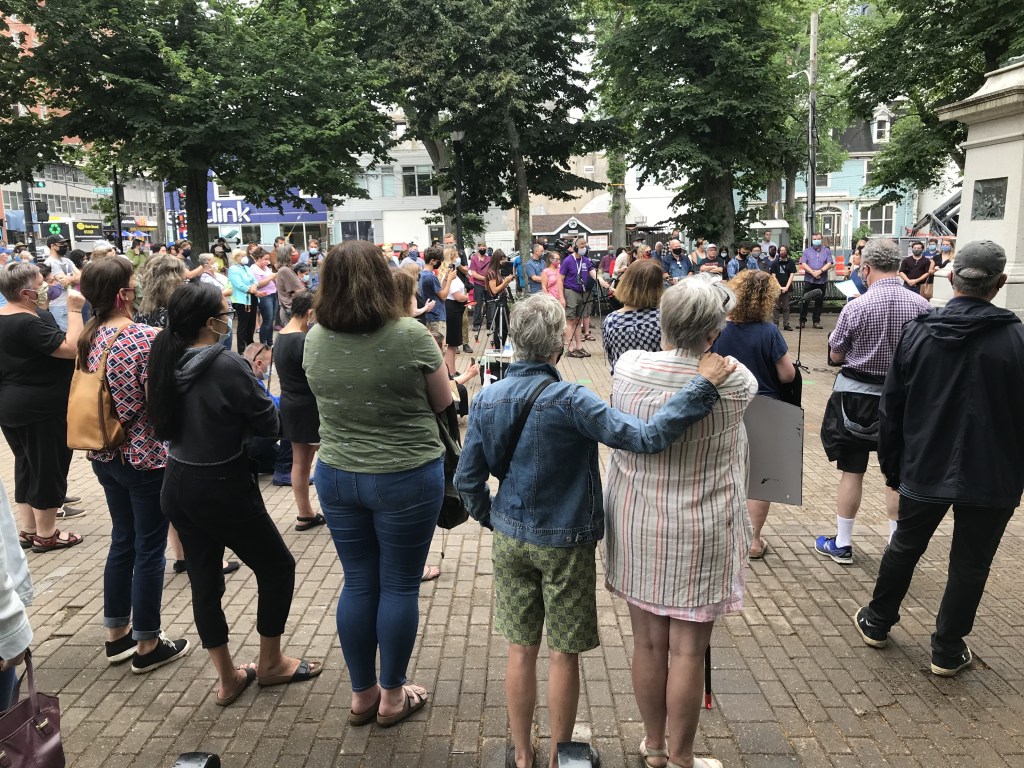 About 200 people descended on Victoria Park Monday to participate in a 22-minute event to demand a public inquiry–not a review–into the Nova Scotia’s mass shooting. — Photo: Jennifer Henderson

The event began with Paynter naming each of the 22 victims killed in the massacre. She then listed 22 reasons why Nova Scotians were demanding a full and transparent public inquiry. Many of the reasons listed were met with applause.

They included: because 22 people including a pregnant woman were murdered in less than 24 hours and each of those murders were preventable; because the victims’ families asked for a public inquiry and were denied; because the murders are rooted in gender-based violence and misogyny; because only recommendations from a public inquiry can be enforced; because this is the largest mass shooting in Canada in our lifetimes; because the police and the government are public servants and they are accountable to the public; because we deserve to know what happened.

A table was also set up onsite for people to sign pre-printed letters to mail themselves. Paynter also urged those present to email Premier Stephen McNeil and Prime Minister Justin Trudeau and demand an inquiry.

Sheri Lecker, executive director of Adsum for Women and Children, was one of seven speakers to directly address the crowd. She said this was an exercise in which all Canadians needed to share and participate. She described it as “shocking and paternalistic” of government to try and determine what information the families of the victims could and could not handle, adding that the families have asked for a public inquiry and deserve nothing less.

“We like you are very concerned that it appears that for years, red flags, whispers, even outright complaints to police about the perpetrator’s domestic violence and accumulation of guns went unheeded,” Lecker said.

The event closed with a poem written by Halifax poet, professor, writer and activist El Jones. In the wee hours of Monday morning, she wrote a powerful piece about the need for a full and transparent public inquiry. The two and a half minute delivery was met with great cheers and applause.

The sentiments expressed by the speakers at Monday’s event were echoed by members of the public who spoke with the Halifax Examiner. James Misener said he believed the decision to hold a review rather than a public inquiry was “a total cop out” by the federal and provincial governments.

“There are many things that are hidden and the victims’ families will never get the answers they require this way. A review is just a way to put it under the rug,” Misener said.

Judith Scrimger came to Halifax from Ashdale, Hants County to lend her support to the families of the victims who have been vocal in their demands for a public inquiry. She believes the families–and all Nova Scotians–deserve to know what happened not only during the massacre, but the events leading up to it. She said to move forward and learn, we need to know what failures and missteps led to the tragedy. 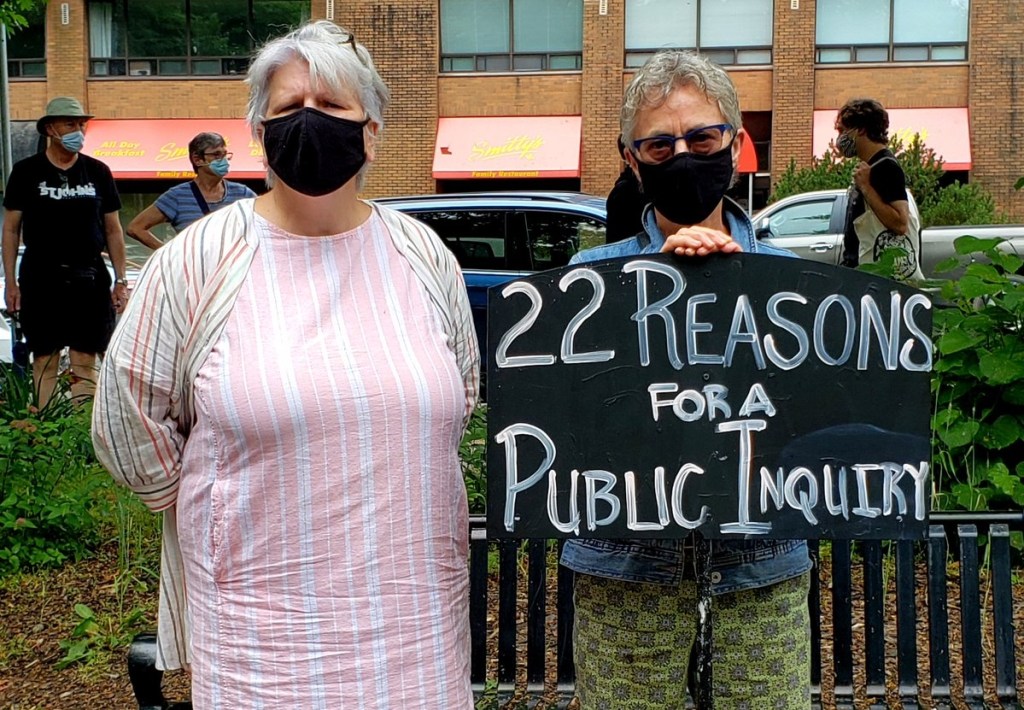 Susan Larder and Carol Millett were among about 200 people who attended Monday’s 22 minute event to demand a public inquiry into April’s mass shooting. — Photo: Yvette d’Entremont

Carol Millett echoed the comments of many others who attended, noting that she believes a public inquiry is the only way to get accountability from politicians, decision makers and the RCMP.

“They have to be held accountable, and the only way to do that is to get to the truth and we can only get to the truth if we require them to speak under an oath to tell the truth, simple as that,” she said.

There was also a peaceful march held in Bridgewater at 11 a.m. Monday outside of provincial Justice Minister Mark Furey’s office. Among those who participated in the march demanding a public inquiry were the families of victims Joey Webber and Joy and Peter Bond.

A peaceful march to support the victims’ families in their demand for a public inquiry is taking place on Wednesday. At 10 a.m., family members and their supporters will march from the ferry terminal to Province House. Their stated goal is a reversal of the decision to hold only a review.