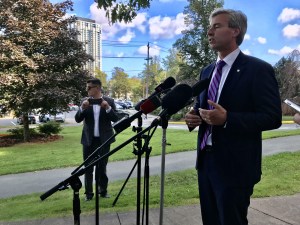 Premier Tim Houston says COVID numbers are “creeping up again,” adding, “like everyone else, I’m anxious about that.”

As of Thursday, Nova Scotia reported 41 new cases of COVID-19 and 20 recoveries. There are now a total of 147 active cases in Nova Scotia. A woman from Central zone in her 80s has died. Ten people have been hospitalized and one patient is in ICU.

“COVID-19 is still in our province and the actions of Nova Scotians are critical right now,” Houston said. “Please get vaccinated, stay home if you are sick, and continue to follow public health protocols.”

Houston spoke to reporters late Thursday afternoon after he, Health Minister Michelle Thompson, and senior NSH executives completed four days of meetings with front-line health workers across the province. Journalists asked Houston if the latest rise in COVID cases has him considering requiring masks be worn indoors after the province moves into Phase 5 on Oct. 4, when most restrictions are due to be lifted.

“That’s a full discussion we will have with Dr. Strang,” Houston. “If he (Strang) suggests that we move to kind of a modified Phase 5 where masking remains, he will have our support on that.”

Houston said the latest epidemiology is not moving in the right direction and “more and more the proof of vaccine policy is necessary.” The Department of Health confirms the federal government is developing a scannable code for cellphones that Nova Scotians may eventually be able to download to gain access to leisure activities such as restaurants, bars, gyms, concerts, and sporting events. Until then, a hard copy of the email sent by Canimmunize listing the vaccines you have received will be accepted on Oct. 4.

The Progressive Conservatives ran on a platform to “fix” health care. Houston says he has been “inspired” by the hard work and suggestions provided by health care providers he met with over the past four days. Houston says his commitment to them involves “short-term actions” his government will implement in about three weeks. Other fixes will take much longer, he warned.

One “longer-term” fix involves recruiting and retaining doctors and nurses who are leaving the profession because of burnout or dissatisfaction with being able to do their jobs properly. Currently, 75,000 Nova Scotians don’t have a family doctor and that means hospital emergency departments are flooded with patients. In response to those issues, Houston announced what he hopes will be “a first step in ensuring every Nova Scotian has access to a form of primary care.”

Starting in December, people without a doctor in Nova Scotia Health’s Central and Eastern zones of the province who have registered online with the Need a Family Practice Registry, will be eligible to book an online video appointment with a family doctor or nurse practitioner. If the problem can’t be addressed through a virtual visit, patients will be referred for a face-to-face consultation.

This type of virtual healthcare has been offered since May for people living in the Northern and Western parts of the Province. 4,900 people signed up for an appointment and the Health Department says 1,500 virtual visits have taken place. That rollout has been slow because only eight family doctors and three nurse practitioners have been providing it. The online appointments are covered through MSI but many health care professionals are already carrying a full roster of patients whom they see in person.

The expansion of virtual health care this December hinges on signing up an additional 30 family doctors and nurse practitioners to provide online consultations. The Progressive Conservative government is prepared to spend $1.3 million to pay for more virtual care in the absence of in-person visits. Houston acknowledges “virtual care is not for everyone” but sees it as one way to improve access to the health system for people who are currently shutout. All the consultations will be with health professionals licensed in Nova Scotia.

Houston also confirmed he met with paramedics and is prepared to work on ways to address shortcomings in the emergency health system that have resulted in long (and occasionally fatal) waits for ambulances. A report done for the province in 2018 found 47% of the time spent by paramedics was on transferring or moving patients between hospitals and nursing homes who were not critically ill or urgent medical cases. This often means ambulances are not available to respond in true emergencies. Houston says he is also open to expanding the scope of practice for health-care professionals such as paramedics, pharmacists, and others to relieve some of the pressure on nurses and doctors.