You are here: Home / Featured / Premier Stephen McNeil and Business Minister Geoff MacLellan say good-bye to each other, and to us 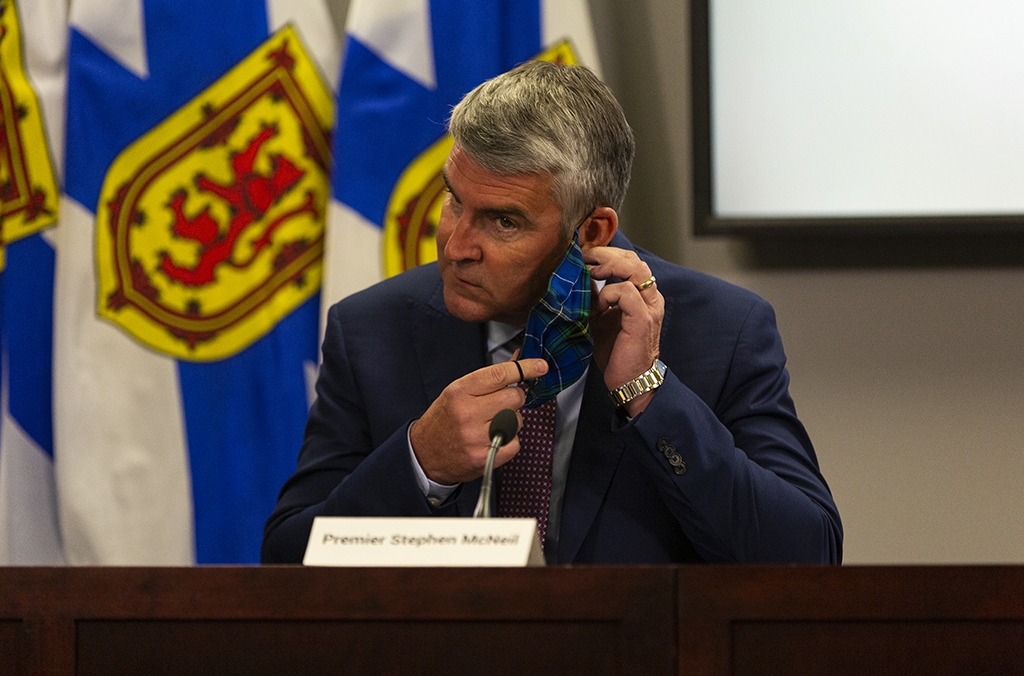 The scrum with reporters was preceded by an announcement by Business Minister and Glace Bay MLA Geoff MacLellan that he does not intend to re-offer when the next election is called. “It feels like the end of the road,” said MacLellan. “I came in with the boss and I’m going out with the boss.” 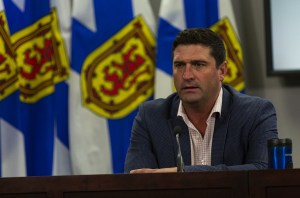 MacLellan said he is returning to private life to spend more time with his wife and two children. MacLellan said “if you are good at this job, it wears you down. Other parts of your life suffer. That said, I don’t regret a moment of my time representing the people of Glace Bay.”

MacLellan said the pandemic has allowed Nova Scotians to see what a “genuine, hardworking, loving guy Stephen McNeil is.” McNeil returned the favour when he addressed reporters, saying “I love that guy.” McNeil noted that MacLellan had joined him when McNeil’s own leadership was under review by the provincial party. McNeil has been in provincial politics 18 years, since being first elected MLA for Annapolis before becoming opposition leader.

Like MacLellan, McNeil fought to keep his emotions under control as he thanked his staff and political colleagues for their commitment and support over what were sometimes unpopular times in office, as he battled various public sector unions and doctors and even judges to keep spending in check. Today he acknowledged he often felt misjudged.

“For all of you out there who thought all I cared about was balancing the budget, you couldn’t be further from the truth,” said McNeil testily. “I wanted to balance the budget so I could invest in your kids and pre-primary. I wanted to invest in children with autism. I want to make sure the entrepreneur who had an idea, knew they could create a job here. I wanted to invest in Graduate to Opportunity so young people and our own sons and daughters saw a future for themselves in this province. I’m also very proud of the fact that the face of this province looks very different than when I became premier in 2013. There are more new Nova Scotians and our population has never been higher and more diverse.”

It’s true McNeil’s popularity has never been higher after having shepherded the province through the shock and aftermath of a mass shooting and 10 months of a pandemic.

McNeil thanked the media for “holding his government accountable” even though there he often took issue with the reporting or held back information journalists believe the public is entitled.

Questions from the scrum

After cabinet, McNeil predicted the deficit for the budget that will be tabled this spring will be closer to $500 million than the $800 million Finance Minister Karen Casey predicted last fall.

McNeil was asked for his opinion on the “best case scenario” for the unfinished business involving Northern Pulp. The company that owns the mill is still threatening to re-open it and sue the province for tens of millions of dollars for breaking the lease that allowed Northern Pulp to continue dumping effluent.

“To have Boat Harbour closed and cleaned up,” said McNeil, without skipping a beat. “We are on our way to do that. What the company decides to do is their decision to make.”

McNeil was also asked if he believes the Yarmouth ferry — which will be docked for a third straight season at a projected cost of $13-$16 million in 2021 — is good value for money.

“One hundred percent,” replied McNeil stubbornly. “This is our international connection. I fully committed to this service and I hope future governments will be as well. I believe the decision that was made by a previous government to sever the tie was wrong. There’s no question I wish we could have done it for less money. I believe it is sustainable. In the long run, there will be a subsidy of some sort. I don’t believe it needs to be as high as it is now. But we need some confidence in the tourism and business sectors that it will be there for the long haul.”

“I can’t sugar-coat it any longer,” said Progressive Conservative leader Tim Houston who took questions from reporters via Zoom. “It was a stupid deal that hasn’t been good for Nova Scotians.” Houston said he believes the recent blizzard of government announcements in the past 10 days — money for long-term care beds, new schools, affordable housing, more protected spaces — is simply an attempt to shore-up McNeil’s legacy and make amends for past inaction on a number of files.

By the way, new regulations take effect March 1 that will ensure married and common-law couples will be able to live together in the same nursing home or veteran’s unit in a hospital. This includes same-sex partners. The change to the Life Partners in Long-term Care Act occurred after many stories in the media about couples being separated in part because partners required differing levels of care or the scarcity of accommodations.

Houston said while he admires McNeil’s commitment to public service and has never doubted his motivation, he’s hoping the new premier Liberals will choose this weekend will be more open to listening to suggestions and working with the opposition.

“In many ways, this has been a government of one,” noted Houston.

As McNeil heads for the door and a well-deserved rest, he’s taking a large number of Liberal MLAs with him. Those who will not re-offer in the upcoming provincial election include Karen Casey, Margaret Miller, Gordon Wilson, Bill Horne, Leo Glavine, and Geoff MacLellan.