You are here: Home / Featured / Power is still out for thousands, and the power outage map is sowing confusion

This story was updated Friday morning.

Three-and-a-half days after Dorian knocked out power for more than 400,000 homes and businesses in the province, Nova Scotia Power issued a news release Tuesday evening, Sept.10, saying it had restored electricity for 75% of these customers. “We have the most crews working in Nova Scotia history,” boasted the release.

Meanwhile, more than 60,000 people still literally in the dark with food rotting in their freezers were being told it would be 11 pm Wednesday or possibly as late as 11pm Thursday before their service will be restored.

The elephant in the room is whether this is the best we can hope for in a province where the transmission lines are owned and maintained by a private company which has a monopoly on service. It rankles to know that in the week prior to Dorian hitting Nova Scotia, two top executives with Nova Scotia Power’s parent company Emera — Emera CEO Scott Balfour and Tampa Power CEO Nancy Tower — cashed in their stock options worth a couple of million dollars when the share price was just below its 52-week high and before it would drop $2.50 post-Dorian. Emera also owns 100% of the Grand Bahama Electric Company on the island decimated by Hurricane Dorian where 50 people died.

Nova Scotians still waiting for service to be restored may be upset to learn NS Power declined an offer of assistance from PSEG (Public Service Enterprise Group) based on Long Island, New York. PSEG is the contractor that does much of the work for the Long Island Power Authority, which serves over two million customers.

Utilities in North America have a mutual assistance agreement that allows them to ask for help due to storms or natural disasters. NS Power did not ask the New York company for help but according to PSEG media relations advisor Jeremy Walsh, the American company reached out and offered assistance on Sept.6 before the storm arrived. “Nova Scotia Power reported on some of the efforts they had made to secure resources from within their parent company,” said Walsh. “No additional requests for manpower were made through NAMAG (North Atlantic Mutual Aid Group).”

That account was confirmed in an email from Patti Lewis, a media relations advisor with NS Power. “We did not seek crews from the North American Mutual Assistance Group because we were more quickly and effectively securing crews through direct outreach. There were numerous contract crews returning from the United States, where they had staged for Dorian but were not required. We were able to redirect them to Nova Scotia.”

Prior to Dorian, NS Power told the public it was bringing in power line technicians from Ontario, Quebec, and Nova Scotia. Yesterday, Sept.11, The Halifax Examiner asked how many crews were brought in specifically to help restore power and what is the total number working on that assignment.

“We have 370 power line crews, 81 forestry crews, and 67 damage assessment teams dedicated to the restoration effort as of Wednesday Sept. 11,” said NS Power’s Patti Lewis in an email received shortly after 5pm yesterday. “This includes approximately 564 Power Line Technicians who are not Nova Scotia Power employees. Additionally, we have supervisors, engineers, planners, and our entire customer care team devoted to this work. It’s a very common practice in the utility sector to collaborate and support the restoration effort of others. In this case, crews come from New Brunswick, Newfoundland & Labrador, Quebec, Ontario, Maine, and Florida. We continue to add more.  On Thursday, we will be up to 470 crews, including 34 from New Brunswick Power. That means there will be 200 additional Power Line Technicians for a total of 764.”

Essentially, NS Power relies on bringing in workers to restore the lines after a storm because the utility made a decision many years ago to no longer keep as many Power Line Technicians on staff. There are presently 179 full-time PLTs on staff.*

In my Dartmouth neighbourhood, the lines came down before the storm really got going, shortly after 2pm Saturday. Service was restored 30 hours later; we consider ourselves most fortunate. 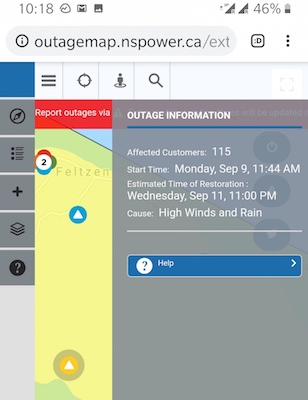 A friend outside the town of Lunenburg has been told his power will be back late Thursday night. Same for a relative in a small community outside Wolfville.

What they want to know — and I forwarded their concerns to NS Power early yesterday —  is why the Outages map on the NS Power website has changed the “Start” time for when the power failures began. It’s frustrating enough to see the estimated “Restoration Time” move further away but how to explain changes to the actual time your power went off and stayed off?

You can check any number of small places in Nova Scotia — I tried Mount Uniacke (not so small), Mader’s Cove outside Mahone Bay, Feltzen South in Lunenburg County, and Scots Bay in the Annapolis Valley near Wolfville. In all cases, NS Power shows the outages starting Sunday or Monday, which seems highly suspect considering the storm roared through Saturday afternoon and evening.

A family member in Scots Bay has no internet so she hasn’t been able to check the Outages map herself. But that family of five has been powerless (no pun intended, it’s not funny) since 1pm Saturday even though the Outages map now shows service was lost Sunday at 2:06pm. 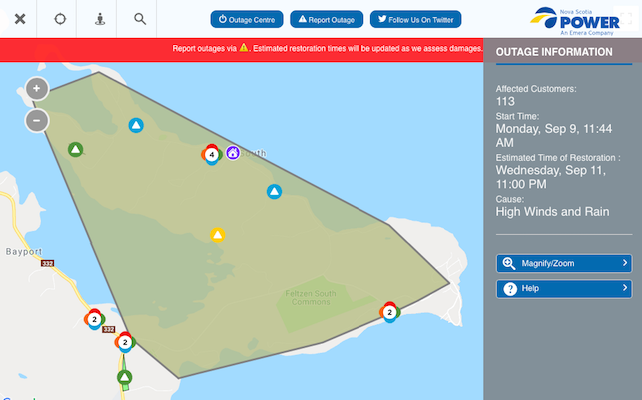 Near Feltzen South, a friend reports he lost electricity at around 10pm Saturday night. Initially, restoration was promised by Tuesday night but that changed to Thursday night. What exasperates and puzzles him is that the start time for when he lost power has changed on the Outages map provided by NS Power. Tuesday night the start time posted was 11:44 am Monday…. a day and a half later than when his home actually lost its service on Saturday night.

The Halifax Examiner asked NS Power to provide an explanation for why the clock appears to have been re-set on power failures that occurred hours and even days earlier than what shows up on the Outages map. Here’s the response:

“The outage information can fluctuate due to weakened trees that have fallen onto power lines since Saturday’s storm,” emails Patti Lewis, a NS Power media relations advisor. “We treat that as a new outage which is why a new start date is assigned on our outage map, even though the cause is still related to Saturday’s hurricane”.

“Additionally,” continues Lewis, “a number of the instances you cite relate to situations where transmission outages impact a large area of customers. After the transmission is restored, there were still distribution level repairs impacting smaller groups of customers within the transmission area. Our automated data management system identifies these as new outages in some situations which results in the outage map posting a later start date. We can go into the system and manually adjust those for the outage map but our resources are focused on planning, managing and carrying out our Dorian recovery, so this has not been a priority. To be clear, though, those outages definitely started Saturday during the storm and we understand that. We appropriately reconcile such outage start times in our reports to the Utility and Review Board.”

Despite that reassurance, I wouldn’t want to bet the farm on the accuracy of those numbers around power outages and their duration. While waiting for an answer from NS Power, I looked up the Performance Standards established by the provincial regulator which came into effect November 2016 following a series of power disruptions during severe winter weather. The company can be fined by the regulator if it  doesn’t perform up to expectations, although everyone knows paying up to a maximum fine of one million dollars is a heck of a lot cheaper than spending tens of millions of dollars strengthening the grid or aggressively trimming trees so lines don’t crash down during bad weather.

Following an “extreme storm,” NS Power is supposed to reconnect 68.7% of its customers within 48 hours. That’s the performance standard. For a “major storm,” the company is expected to restore service for 88.4% of its customers. (These benchmarks were set by experts in the field).

Last night, four and-a-half days after Dorian hit, the company says 85% of its 400,000 affected customers now have electricity restored. The question The Examiner asked NS Power is what percentage had service restored after 48 hours, as mandated by the performance standard. The following answer lacked specifics and is a variation on “trust us.”

“By the end of 48 hours, we had restored more than the Performance Standards requirement,” said Patti Lewis. “Results will be reported to the UARB.”

Interestingly, the performance standard for 2019 states that customers in Nova Scotia should expect to be without service twice a year for up to four hours at a time. Good to know. With global warming leading to more frequent and intense storms we can expect more of the same unless changes are made.

* We initially incorrectly reported that NS Power has no Power Line Technicians on staff.

This article has been updated with responses from Nova Scotia Power.