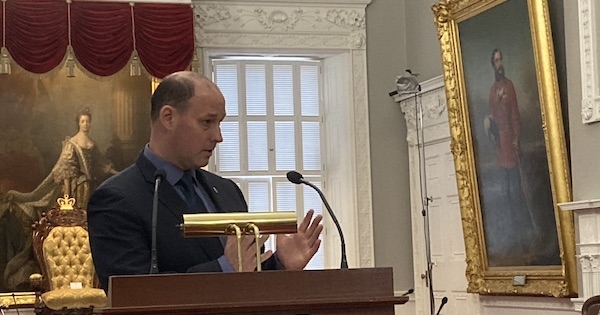 The Houston government is today tabling a “Environmental Goals and Climate Change Reduction Act,” which is in essence of an updated version of the previous Liberal government’s Sustainable Development Goals Act of 2019, with some important differences.

Most notably, the 2019 Act was never proclaimed because the Liberals said they needed to go out for consultation on the goals and necessary regulations. The new act legislatively establishes 28  goals, and so will be proclaimed as soon as it makes its way through the legislature.

Among the legislative goals are some specific to climate change, including:

To reach the ambitious renewable electricity goal, Nova Scotia’s electrical grid will have to be integrated into the “Atlantic Loop,” which will give this province access to Quebec hydro power.

The Atlantic Loop is “a fundamental component,” of the new legislative goals, said Environment Minister Tim Halman in a press briefing this morning. “I believe that has the potential for transformative change in terms of how we we produce electricity here in the province.”

Department staff added that the Atlantic Loop will also allow renewable electricity generated in Nova Scotia — for example, by offshore wind — to be exported to other provinces.

The new legislation includes a goal to “implement an ecological forestry approach for Crown lands” — i.e., the recommendations of the Lahey Report — but not until 2023. The Lahey Report was issued three years ago.

Asked about the reason for the delay at the press briefing, Halman punted the question to Tory Rushton, the minister of the Department of Natural Resources and Renewables; Rushton was not present for the briefing.

By next spring, a “Climate Plan for Green Growth” will be developed, which will spell out specific ways to implement the goals.

The legislation require an annual update on progress meeting the goals by July of each year, starting next year, and a five-year review of the act itself, with the possibility that goals will be strengthened.

“It meets everything that was in the [PCs’] election platform,” said Noreen Mabiza, the Energy Coordinator at the Ecology Action Centre (EAC) in a phone interview. “We’re happy to see these goals embedded in the legislation.”

“Of course more work has to be done,” she added. “We’re in a climate emergency, so there’s more work to done — we need to get rid of offshore oil, for example.”

Overall, however, the EAC is supportive of the legislation.

The NDP had a more nuanced reaction.

“While it is encouraging to see environmental goals moved out of regulation and back into law, the Conservatives’ plan lacks the urgency that this moment requires,” said NDP MLA Susan Leblanc in a press release.

“The plan announced by the Conservatives today holds greenhouse gas emission reduction goals at the same level set by the past Liberal government – which we know will not be enough to avoid the catastrophic impacts of climate change.

“As the UN Climate Change Conference (COP26) begins this weekend, jurisdictions around the world must level up their efforts to meet the climate emergency head on. To do our part to hold global warming to 1.5 degrees we must reduce emissions to 50 per cent below 1990 levels, which is 58 per cent below 2005.”