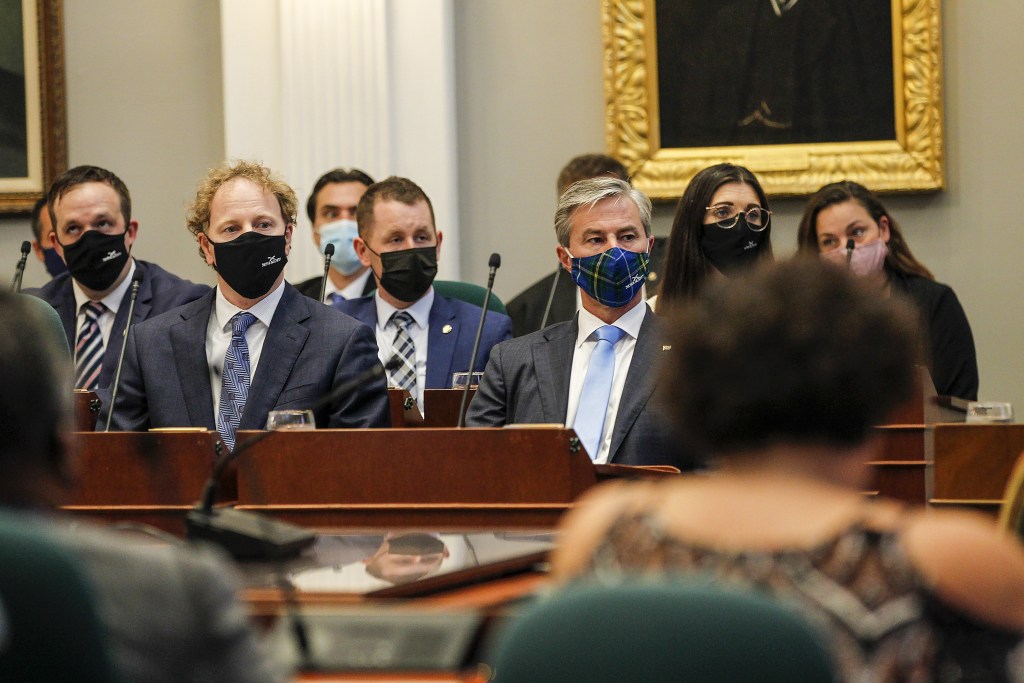 Premier Tim Houston and Progressive Conservative MLAs listen to the speech from the throne on Tuesday. — Photo: Communications Nova Scotia

Premier Tim Houston continued to signal a focus on health care during his government’s speech to the throne, but failed to offer any specific commitments to fix the province’s housing crisis.

Lt.-Gov. Arthur LeBlanc delivered the speech at Province House on Tuesday, marking the beginning of the first full, in-person sitting of the Nova Scotia Legislature since the pandemic began.

The speech is the new Progressive Conservative government’s way of signalling what it intends to accomplish during the coming sitting of the legislature, in this case the first session of the 64th assembly. And it’s no surprise that fixing health care was the dominant focus.

“Our government isn’t focused on simply saying what they think people want to hear to improve healthcare. We are actually interested in improving the lives and health of Nova Scotians,” LeBlanc said.

“We will continue to do the work and the research, putting forward solutions for Nova Scotians.”

The speech committed to boosting the recruitment of healthcare workers, helping foreign-trained doctors get credentialed in Nova Scotia, offering telehealth for everyone on the waitlist for a family doctor, changing the way patient transfers work to free up ambulances, and increasing surgical hours.

Another key commitment from the speech: universal mental health care.

“Access should not be exclusive to those who are fortunate enough to have insurance coverage or who can afford private care. Access should be truly universal,” LeBlanc said.

“If you don’t qualify for private mental health coverage, under our plan you will.”

It’s unclear how that will work, but the government said it will reduce wait times for mental health care and attract more mental healthcare workers to Nova Scotia.

To help seniors, the government said it will build “new, single bed long-term care rooms to begin to meet the demands of those on the waiting list and seniors who will need beds in the future,” hire “more long-term care staff to support residents and to support current staff,” and increase “the minimum standards of care in longterm care properties.”

Tax commitments, but no real solution to housing crisis

The speech from the throne repeated the PCs’ campaign pledge to refund corporate taxes for businesses who give their employees raises.

“Our government will give employers a choice: leave the money they paid as corporate tax in the hands of the government or ask for it back on the condition that they distribute those same dollars to their team. That’s an easy decision, and it will mean more money in the hands of those who earned it: Nova Scotians,” the speech said.

“This isn’t a plan for the rich, this is a plan for the middle class and those struggling to join it. If you want to stay competitive, you will pay a competitive salary. This means better paying jobs and growing businesses.”

Another campaign pledge, the speech committed to waiving income tax on the first $50,000 for tradespeople aged 30 and under.

That same section of the speech includes the one and only use of the word ‘housing,’ with the government suggesting bringing in more tradespeople and increasing supply is central to its plan.

“There is a housing crisis in Nova Scotia. We have a plan to address this crisis — and attracting and training more trades people is critical to its success,” the speech said.

There’s no specific housing-related commitment in the speech.

On the environment, the speech reaffirmed Nova Scotia’s commitment that “80% of energy will be supplied by renewable energy by 2030.”

Finally, the speech committed to create fixed election dates in Nova Scotia, the only province without them, and to restoring the power of the public accounts committee. Former Premier Stephen McNeil limited the scope of the topics the committee could discuss, and reduced the frequency of its meetings.

Liberal leader and former premier Iain Rankin responded to the speech in the chamber, saying his caucus would hold the government to account, particularly on its commitments to fix health care.

“There is no need to wait for the budget to inject the half billion dollars that was promised in the election into the system,” Rankin said. “We will be asking questions to see when that money will be spent and the resources needed to take on these issues that were promised to Nova Scotians, but we will be there to support the government when they make positive changes in the system.”

Rankin highlighted the lack of commitment around housing in Tuesday’s speech.

“That had a total of one paragraph attention in this speech from the throne,” Rankin said, noting the speech did say the government has a plan.

The NDP also noted the lack of urgency on the housing crisis in the government’s speech.

“It is startlingly disappointing to see virtually no mention of housing, and zero policy initiatives to address the housing crisis, in today’s address,” NDP leader Gary Burrill said in a news release.

“We must address the considerable problems in our heath care system. One part of addressing people’s health care needs is to acknowledge that safe, secure, accessible housing is part of having a healthy Nova Scotia.”