You are here: Home / Featured / Opposition critics on the Advisory Council on the Status of Women call for an inquiry into mass murder, but McNeil government demurs

A provincial public inquiry into the April mass shooting that resulted in the deaths of 22 people in Nova Scotia is “absolutely a must,” says Karla MacFarlane, Progressive Conservative MLA for Pictou West and critic for the Advisory Council on the Status of Women.

In recent weeks, as more questions arise over how the RCMP handled the events, both during and well before the murderous rampage of April 18 and 19, there has been mounting pressure for Premier Stephen McNeil to commit to such an inquiry.

On May 15, more than 30 law professors at Dalhousie University wrote an open letter to the premier, saying the time had come for him “to act” and call a public inquiry into the events, given the “recent accounts that reports had been made to the RCMP about violence against his [the shooter’s] intimate partner and his possession of illegal firearms prior to the April 2020 murders.”

So far, McNeil has refused to commit to an inquiry. On CBC’s The Current this morning, the premier once again insisted it was up to Ottawa to lead any inquiry into the shooting.

In a telephone interview, MacFarlane told the Halifax Examiner that part of an inquiry may need to happen in Ottawa, but the inquiry itself “definitely needs to happen” in Nova Scotia:

… we recognize that a public inquiry isn’t going to take away all the sadness and anger and frustration and hurt, but it’s certainly going to assist in that. It will be therapeutic in many ways for the survivors and the communities. 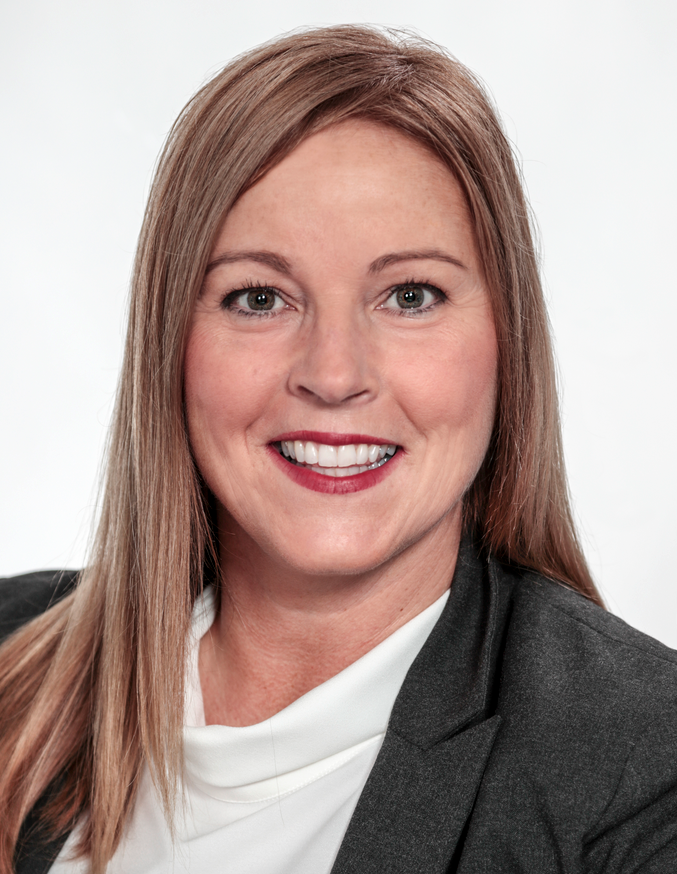 Asked if she thought an inquiry would be therapeutic if it revealed that lives could have been saved had the police had acted differently, she replied:

I think the truth always eventually heals … That’s why it’s extremely important to have the inquiry here because of the fact that it happened here. And I think that we must recognize that this is the time for us to be most transparent and allow ourselves to be vulnerable in providing all the truth in this matter. And that’s why an inquiry has to happen so that we can identify why did it happen and now how do we move on?

MacFarlane said she supports a public inquiry that adopts a feminist lens. However, she thinks it should be broad enough that it looks at the history of the shooter, and that there could be “a lot of lenses” used.

She believes that were the legislature were now sitting, MLAs would be talking about the shooting and debating laws to prevent such a thing from ever happening again.

“An inquiry would go a long way in helping draft future legislation,” she said. “And I would say 100 percent that you would have bills introduced from all three parties around this.”

MacFarlane hasn’t had the chance to speak to the whole PC caucus about the federal government’s recent ban on “military grade assault weapons,” but she said she personally supports it, even if it is a federal matter.

“There is absolutely no reason for anyone to have an assault weapon or rifle,” she told the Examiner. “An assault rifle has one purpose: to kill as many people as possible in the quickest time possible.”

MacFarlane’s views on the firearm ban are in stark contrast to that of another prominent politician from Pictou County, namely Peter MacKay, who is a leadership candidate for the federal Conservative Party and formerly minister of justice and of defence in the governments of Stephen Harper. 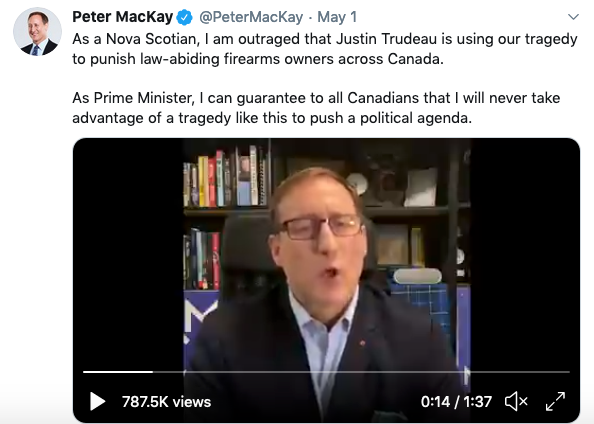 Peter Mackay has tweeted his strong opposition to the firearms ban. When he was federal minister of justice in 2014, he was photographed wearing a t-shirt with half of the Canadian maple leaf transformed into an assault weapon, over the words “No Compromise.”

The Canadian Coalition for Firearm Rights (CCFR) has also billed MacKay as one of four Conservative Party leadership candidates participating in its “live, virtual, interactive town halls where gun owners can join in, bring their questions and get involved.” On May 26, the CCRF filed an application in Federal Court in opposition to the recent firearm ban. In its application, the CCFR said it has a membership of 28,300, which would account for about less than 1.3% of the estimated 2.2 million Canadian gun owners.

MacFarlane clearly differs from the federal Conservative leadership candidates on the federal government ban on military-grade assault weapons. She said she thinks that the question of how the shooter managed to get his weapons is another reason an inquiry is important.

She understands that there is a need to allow the RCMP to complete its investigation, but added:

But there’s no reason why we still can’t call one … and start putting parameters around what that would look like, while not interfering with the ongoing investigation by the RCMP. I think Nova Scotians need to hear right now that their leaders from all parties are endorsing an inquiry to happen … I think what Nova Scotians want to hear from the premier is that an inquiry is going to happen.

MacFarlane said she has heard some comments about what the cost of such an inquiry would be for taxpayers, to which she responded: “I think the question really is: what is the bigger cost going to be if we abandon an inquiry?”

“A hard curtain to peel back”

In a telephone interview with the Halifax Examiner, MLA Claudia Chender, NDP house leader and critic for the Status of Women, said that she also thinks the provincial government needs to take the lead on a public inquiry. 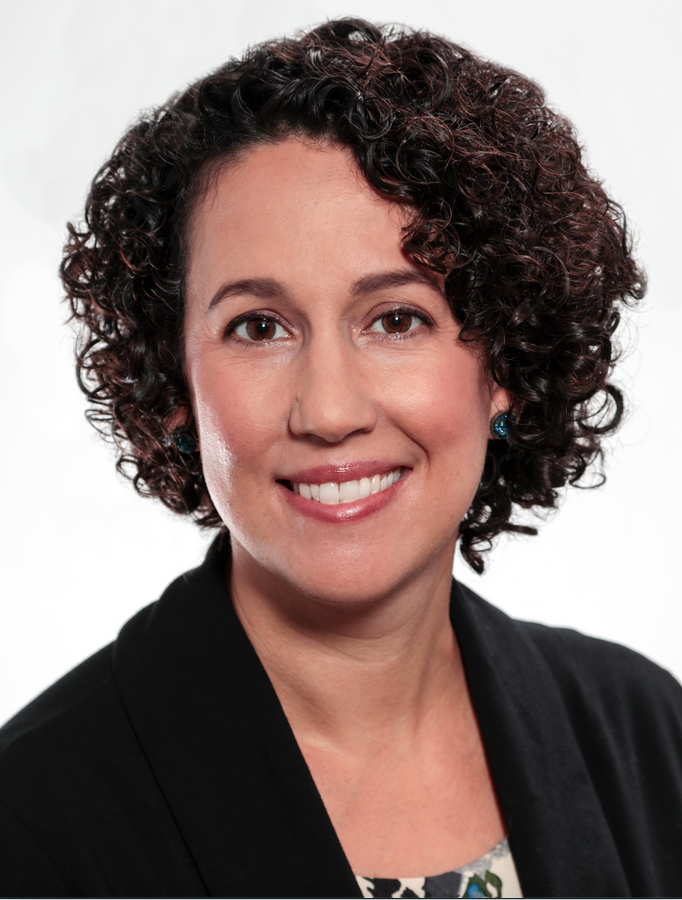 “We join the call for a provincial inquiry, including a gendered lens,” Chender said. “I definitely think that the provincial government needs to take the lead on that. If the federal government wants to join an inquiry, that’s great.”

Chender disagrees with Premier Stephen McNeil that there is a jurisdictional reason to have Ottawa take the lead, and says that his argument has been countered “very persuasively by a number of legal scholars and others.”

She is particularly concerned about things that are specific to Nova Scotia and the administration of justice in the province, and the “really troubling systemic gender-based violence that goes on in our province.”

“I think we have to look at misogyny and intimate partner violence in a really, really specific and clear and detailed way, and how that did or didn’t play a role in the events of last April,” Chender told the Examiner.

An inquiry, she said, would get at “tacit acceptance and looking the other way” when someone witnesses abusive behaviour. “What all of this is pointing to is the need for a culture change.”

While gender-based violence is certainly and sadly universal, it’s also very specific and it manifests in really specific ways in different communities… We have a lot of systemic misogyny, and in some cases violence here in Nova Scotia. And that’s a really hard curtain to peel back, especially right now when I think the whole province is in mourning.

However, Chender is not saying that Premier McNeil should call the inquiry today.

We would like to see the premier say that there will be an inquiry. I don’t think that those terms of reference need to be established now. But I think we need a firm commitment from the provincial government that that inquiry will happen.

The Halifax Examiner also requested an interview with Kelly Regan, Liberal MLA and provincial minister responsible for the Advisory Council on the Status of Women Act. So far none has been granted, nor has there been a reply to emailed questions about the calls for a public inquiry.

As we were about to publish, we received this statement from Regan’s office:

“Kelly Regan, Minister responsible for the Advisory Council on the Status of Women, will respectfully decline the request for an interview. Please see the statement below.

We recognize that Nova Scotians are looking for answers about the tragic events that happened in and around Portapique. My colleague, Minister Furey, is working collaboratively with his federal colleagues to get the answers that Nova Scotians deserve and to achieve learnings from this tragedy, to help ensure a similar event does not occur again anywhere in Canada.

We need to provide the time and space for the RCMP to conduct a thorough investigation into this complex tragedy.

I want to assure women experiencing domestic violence that help exists. I encourage anyone who needs help or information about domestic violence to call toll-free 1-855-225-0220. Help is available 24/7. And if you’re in immediate danger, please dial 9-1-1.” 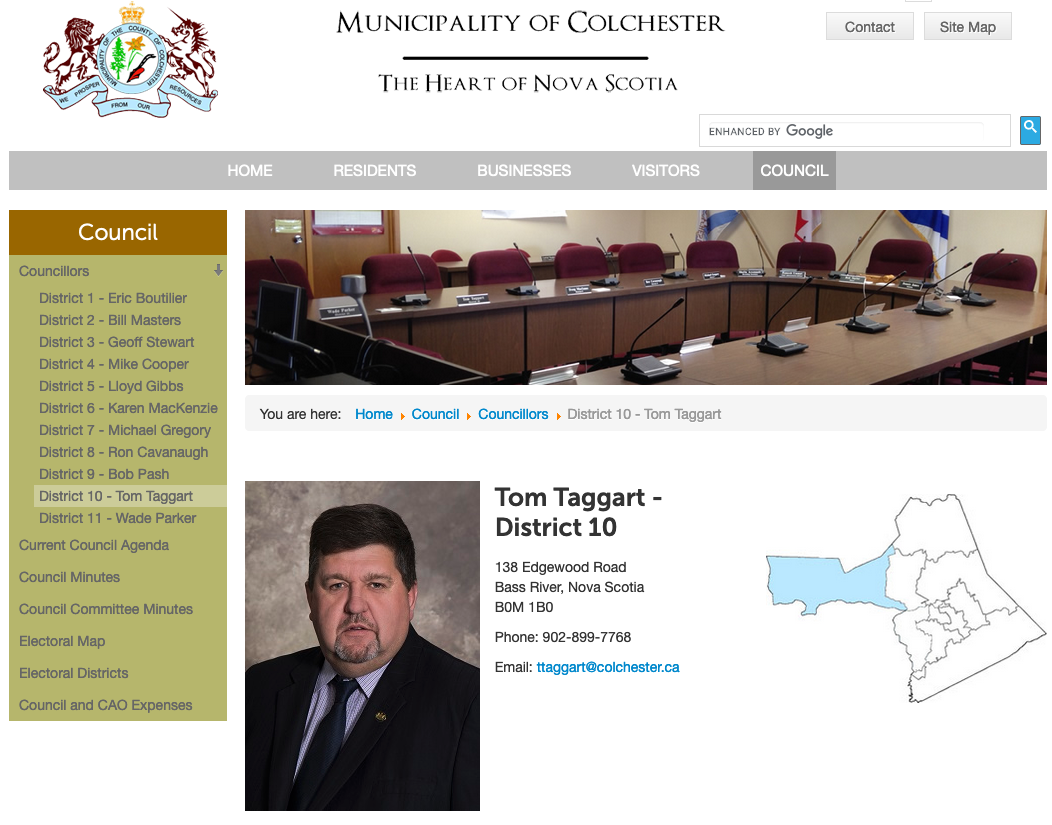 Councillor Tom Taggart, who is serving his third term in District 10, which includes Portapique where the shootings began, told Jennifer Henderson that she was not the first reporter to ask whether he thought there should be a public inquiry into the conduct of the RCMP before and during the tragedy. He said he had been asked that “a million times.”

“I’m staying out of that altogether for now,” he said in a phone conversation with Henderson. “My whole focus has been about the families [in Portapique] and can I get things back to normal in there. So I don’t want to comment on those things at all.”

As for his own views on whether an inquiry should be called, Taggart said, “I’ll be honest. I’ve urged Council to respect the community and families there for now. There will be lots of time for those discussions, any questions that need to be answered. But certainly I’m not ready to jump into that right now.” 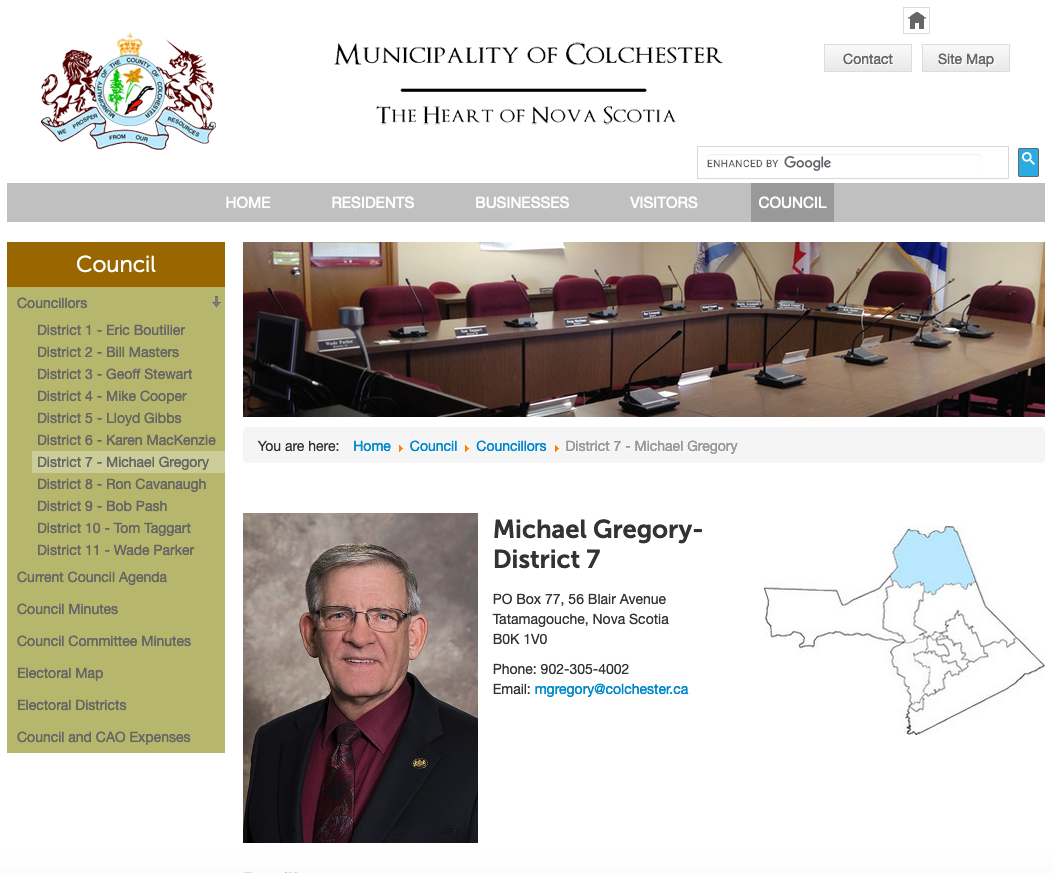 The Examiner also asked another Colchester County Councillor, Michael Gregory, a retired RCMP officer of 25 years, for his views on calls for a public inquiry. While he didn’t grant an interview, he did respond to some questions emailed to him:

Had Councillor Gregory granted the Examiner a phone interview as requested, his response that “all we know about the incident is what we read in the news” would definitely have prompted a follow-up question. That question would have been to the effect that surely he had just provided the best reason of all for holding a public inquiry, shown why one was needed.

Unfortunately, he didn’t grant such an interview.