You are here: Home / City Hall / Open Street Sundays are back, but still too costly for organizers 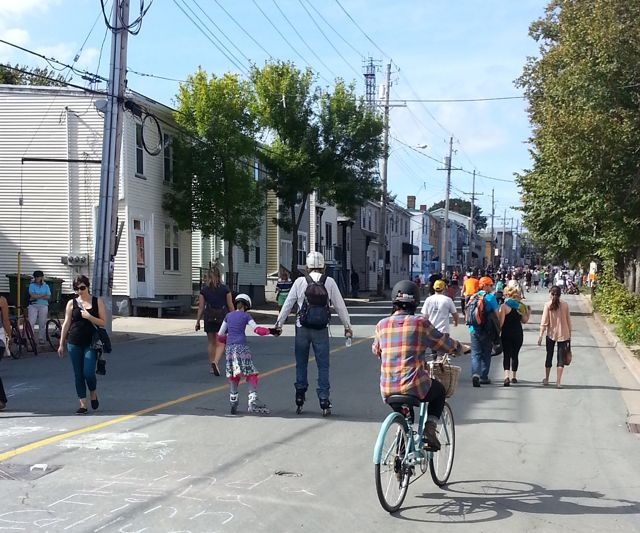 Agricola Street getting Switched in 2014.

I’ve said it before and I’ll say it again: I love Switch.

What’s not to like about a pop-up linear park in the middle of the city on a Sunday afternoon?

On June 5th, Switch returns to Dartmouth, opening up a two-kilometre stretch along Portland Street and Prince Albert Road to walkers, cyclists, skateboarders, and basically anyone outside of a car. Businesses will set up shop along the corridor, and community groups and artists will animate the route with everything from music to bouncy castles to yarn crafts.

The idea, besides providing outdoor recreation opportunities on a summer Sunday, is to change our attitudes towards the city and our streets.

Gil Penalosa, former Parks Commissioner of Bogota, Columbia and pioneer of Open Streets initiatives, visited Halifax back in 2013. “When you look at any city from the air,” said Penalosa, “the biggest public space is the streets. And the streets belong to everybody.”

Open Streets are “almost like an exercise in social integration,” said Penalosa. “Great for developing a sense of belonging, for improving physical activity and public health, and also from the point of view of mobility. All of a sudden people realize how close things are within their cities.”

Of course Penalosa’s Open Streets initiatives tend to have two things going for them that Switch is still working towards: length and frequency.

Open Streets routes need to be long enough to connect neighbourhoods and amenities, according to Penalosa. Then “it starts being something that you use as a means, not as an end in itself.” And then there’s frequency: Open Streets events need to happen on a regular basis, so they work into the rhythm of city life.

Eliza Jackson, director of the Planning and Design Centre, the founders and major organizers behind Switch: Open Street Sundays, says that more frequent events continues to be the long term goal. Having something every Sunday would mean “it’s something people can get used to or come to expect,” says Jackson. “Something that’s more normal, and that provides a venue for people to explore their city on a weekly basis, rather than this once or twice a year event.”

Back in 2012, when it first came to Halifax, the original Switch concept was for a five-kilometre route running the length of the Peninsula, eventually connecting Africville with Point Pleasant Park, in a weekly Sunday afternoon active transportation corridor. But the red tape involved in such a lengthy route proved a barrier, as did the cost. The red tape has since been relieved somewhat by the city, but the cost remains a problem.

Closing a street for a festival or event is a costly business, and it’s mainly because of a technicality in our Motor Vehicle Act (MVA).

Right now, organizers with Switch and loads of other street events (races, parades, markets, or festivals) are required to hire police officers to handle traffic control, which can be costly due to overtime costs. This, despite the fact that the MVA has a licensing system for traffic control persons. (You know the folks with flags and pilons that steer you around road work? For $100, you can take a one-day course to qualify as one.)

But our licensed traffic control workforce can’t handle traffic for events like Switch, because the MVA limits them to construction projects only.  Which means that street events are required to hire police officers for extra duty, at much higher rates than your average traffic controller. 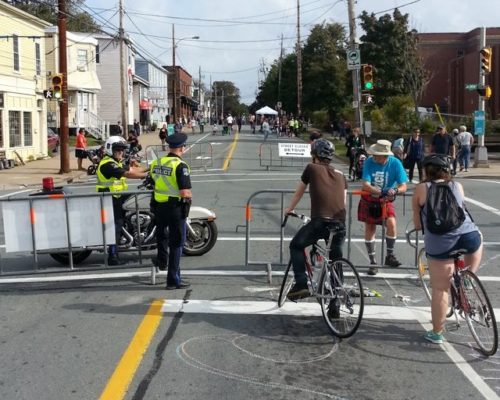 Police officers on extra duty patrol one of the intersections affected by Switch Halifax in 2014.

“It really is just a quirk in the MVA that should be corrected,” says former cabinet minister and now independent MLA Andrew Younger, who put forward an amendment to do just that in April.

“I don’t think anyone was being nefarious when they wrote this however many years ago,” says Younger. “It’s just somebody realized they needed traffic control professionals for construction sites and put that in the Act, and the way it was worded limited it to just construction.”

Despite years of organizers and city officials looking for solutions to the high cost of Switch, a Facebook post by Tim Rissesco, who heads up the Downtown Dartmouth Business Commission, seems to be the source of the simple fix. After some quick social media interactions by Rissesco, Younger, and city councillor Waye Mason, an amendment was born. 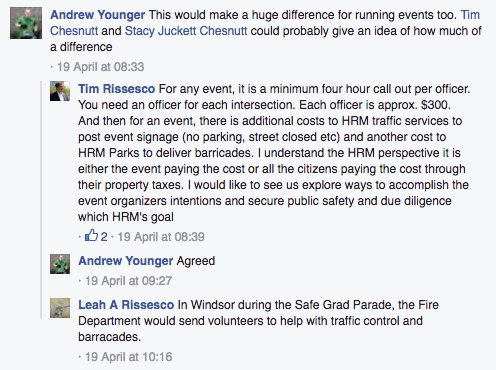 It turns out Facebook can be a productive use of time. This comments thread is in response to an article posted by Tim Rissesco about Toronto plans to move their traffic control from police to trained controllers.

Unfortunately, our provincial government seems poised to ignore Younger’s fix, as the legislature is expected to wind up by the end of the week, with the amendment sitting motionless after a first reading.

“I was hoping they would pass it this session because it could have the immediate effect of saving a lot of events across the province money this summer,” says Younger.

The bill, or a similar one put forward by the government, stands a good chance of success in the fall, particularly if the public support keeps up, and if municipal councils come on board, says Younger.

“We’ve been getting pretty regular emails from people, and some of them have been copied to the Department of Transportation and the minister, so my hope is they will see this as something valuable.” Support from municipal councils “would probably guarantee that it would move forward,” he says.

Eliza Jackson is positive about the possible effects of the legislative change. “If we can have some really well-trained volunteers who can act as traffic control persons in place of police officers, that’s something that will help us move to a more sustainable model for Switch, and hopefully more frequent events,” says Jackson.

Switch is proposing an expanded Halifax route for this fall, connecting the Hydrostone Market to Spring Garden Road, then heading back north along Barrington to Grand Parade. The route still needs to be approved by Halifax’s special events task force. Financial support is coming from the business commissions on the route, and the organizers have also applied for a community events grant from the city.

“A lot of the grants that are going out to these events really go to pay for the policing costs,” says Younger. “It’s great that they get funding, but wouldn’t it be nice if everyone could work together to reduce their costs, then we could be more cost effective, and potentially have more events.”

Switch is one of many open streets events across the continent inspired by Ciclovia in Bogota, Columbia, where every Sunday over 115 kilometres of streets are closed to cars, and upwards of 1.5 million people walk, bike, skate and participate in a host of exercise classes and activities.