You are here: Home / City Hall / Of Citizens and Taxpayers

I wrote a book about Canadian political history, and some booksellers are shelving it in the business section. Why? It’s about tax politics.

That’s a problem, and not just for my marketing strategy.

If business people are the only citizens who engage in an informed way with tax, then our tax politics and policy are going to be one-sided.

Of course “business people” are a varied lot. But the ones who start in by saying “As a taxpayer…” are almost certainly going to complain about big government wasting their money. Gazebos. Senators. They’ll point out that they spend money to do useful things, create jobs, deliver Christmas trees. But, they’ll emphasise, their money should be their own. They’ll point out that if a lust to buy Porsches or pumpkins is what gets them out of bed in the morning, then the government shouldn’t undermine their incentive to work by taking so much of what they earn.

“Why can’t we think like citizens?” someone else chimes in. “I like paying taxes! They’re the price of civilization.” Almost certainly, though not always, this speaker is salaried or a wage-earner, someone whose income tax payments are made by payroll deduction, money that’s never really in hand before it goes out again. They speak of paying for schools and roads, hospitals and recreation programs. Enjoying a library, grateful for a surgery, this person would never buy a vanity plate with TAXPAYR on it.

I can’t tell you how many times people have told me they dislike being addressed by governments as “taxpayers.” They’re citizens.

But “citizen” in that sense — the broad thinker who sees taxes as the seed of all good things social – is a newish kind of citizen. Look at these cartoons from the 1920s: 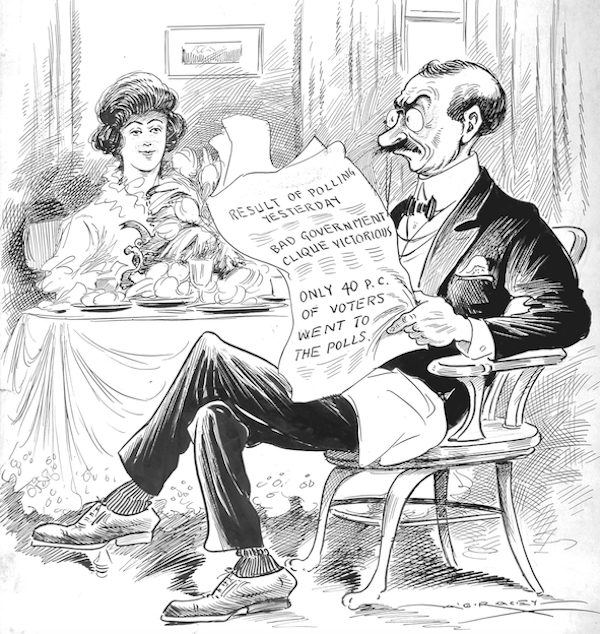 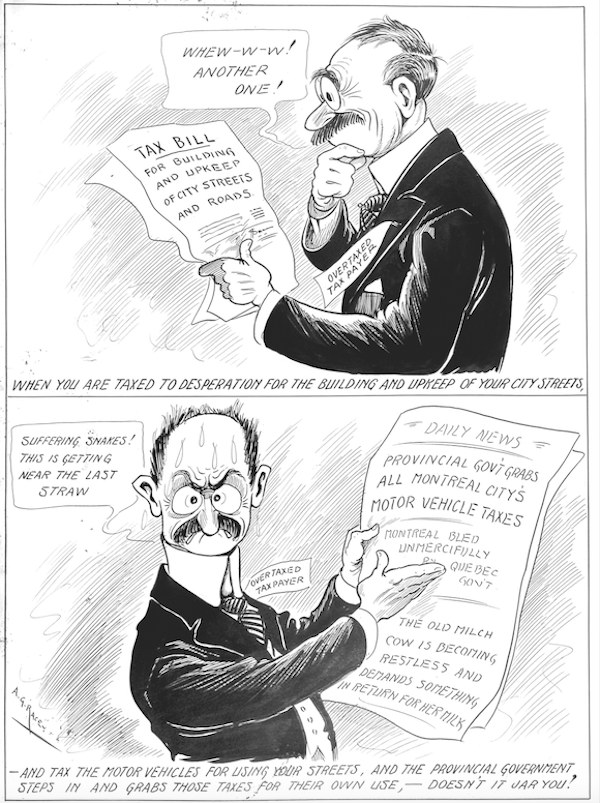 That’s “the citizen” back in the day. A shareholder in the business of the city. A patrician, one of the men in charge, in his starched collar and spectacles and posh suit.

A “citizens” committee ran the strikebreaking program against the Winnipeg general strikers in 1919. Those citizens saw themselves as the responsible few, the executive committee of the propertied people. And they were the “over-taxed taxpayer,” too. In the 1920s and 1930s, the “Citizens Research Institute of Canada” was the leading voice against “high taxes.”

Those folks were citizens precisely because they were taxpayers. In many Canadian cities and provinces, and in Halifax and Nova Scotia in particular, the right to vote was based in having paid taxes. There was no provincial income tax in Nova Scotia before 1962, so the taxes that counted for voter qualification were the municipal ones: property taxes and sometimes head taxes (usually known as poll taxes).

You showed up to vote with your tax receipt in hand. The tax roll was in effect the voters list.

The reason that paying taxes and the citizen’s right to vote were so closely tied was that, for a long time, elected governments had only one purpose – to make property secure and profitable. If you owned no property, you had no stake in public affairs and therefore no right to a voice in government.

But not everyone shared that view of the state. In the 19th century in Britain and Canada, men without property fought for a taxpayer franchise, the right to vote as taxpayers. Of the many battles for voting rights, this one is probably the least well known. When these mostly working-class, mostly white men won their fight, it was an early victory for electoral democracy.

In 1920, the property and taxpayer qualifications were removed from the federal franchise law and from Nova Scotia’s provincial elections statute. Oh, and most women got the vote, too. Voting in province and nation was now based primarily on being a resident and a British subject.

But the effects of the older definition of “qualified” voters lingered on. In the 1950s, inmates of Nova Scotia’s poorhouses or of any “unemployment relief camp,” “lodged and fed” by government, were deemed not to be “residents” of the province. For the purposes of provincial voting, the county and city poorhouses were foreign territory.

And in municipalities, the old Victorian idea of the citizen also continued. The taxpayer franchise hung on in the NS municipal franchise statute until 1953. It lasted even longer, and with a gender twist, in Halifax, which is governed by a City Charter. In the rest of the province’s unchartered towns and villages, a married woman could vote if her husband paid taxes and could vote. In Halifax, not so. Only if she herself paid city taxes on property that she herself owned could Mrs. Halifax vote.

So it came to be that Kentville had a woman mayor, Mrs. Gladys Porter (1946-1960), before many married women in Halifax could even vote.

The city also had a poll tax which allowed the non-propertied to vote, but not if you were poor. After 1931, if you earned under $750 a year, you didn’t have to pay the poll tax. Great. But here’s the bad news. That exemption had been $400 before 1931. Canada’s average annual industrial wage was approximately $830. Raising the poll tax exemption to nearly that average wage meant that many people who had paid only a poll tax lost their municipal vote. In effect, the 1931 City Charter amendment disenfranchised a whole swathe of working class voters. In Halifax (and elsewhere), a move like that was a tactic in the politics of unemployment relief.

A slogan of propertied voters in the 1930s was “No representation without taxation!” Yes. The reverse of the old revolutionary cry for fair taxation.

In 1963, Halifax finally caught up with modern electoral democracy. The City Charter was revised to give the vote to all adult Haligonians. Poll taxes were collected until 1970, but their point was largely gone.

On a national scale, millions of working class Canadians joined the ranks of federal income tax payers in 1942. For the first time, all income above subsistence ($660 for a single person) was taxed by the nation. Hundreds of thousands of voters in federal elections were now also payers of a federal income tax.  The power wielded by these new voting taxpayers, many of them new union members, went into the push for social security. The 1944 family allowance (a per-child cash payment) was something in return for lower-income Canadians’ contributions to the public revenue.

Like those patrician citizens in starchy collars who ran Canadian cities, Canada’s new taxpayers expected a benefit in return for their tax dollars. Like them, they grew angry when they thought governments were misspending any of the dollars they contributed. But they also understood social insurance – the unemployment insurance won in 1941 and the health insurance that came in 1968.

They knew that, as with commercial insurance, you might pay and never claim. But knowing that you could claim if you needed, and knowing that your payments would help someone else if not you, made these programs not just a source of personal security, but a means to a more stable society. Social security would prevent a return of the near-revolutionary misery of the 1930s. It seemed like a fair deal for a taxpayer and a citizen.

Tax history isn’t just business history. It’s about these bigger deals and the political work of building understanding and consent. It’s about the shared history of citizens and taxpayers. I like to join the two with a hyphen. Citizen-taxpayers are people who contribute, who expect a good return, who participate in decisions about the deal, and who think about their interests – but not narrowly. Citizen-taxpayers think about about the fiscal basis of government, but they think pragmatically, without the knee-jerk attitudes of left or right.

The hyphen that joins citizens and taxpayers can do good work in building democracy. 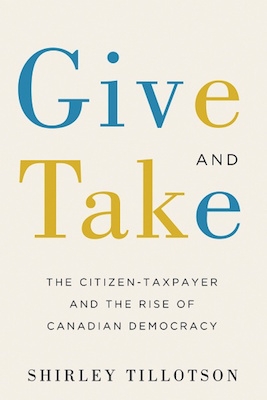 Shirley Tillotson is an Inglis Professor at the University of King’s College and an Adjunct Professor (Retired) in the Department of History. She is the author of Give and Take: the citizen-taxpayer and the rise of Canadian Democracy. The book is available at Chapters and Bookmark.