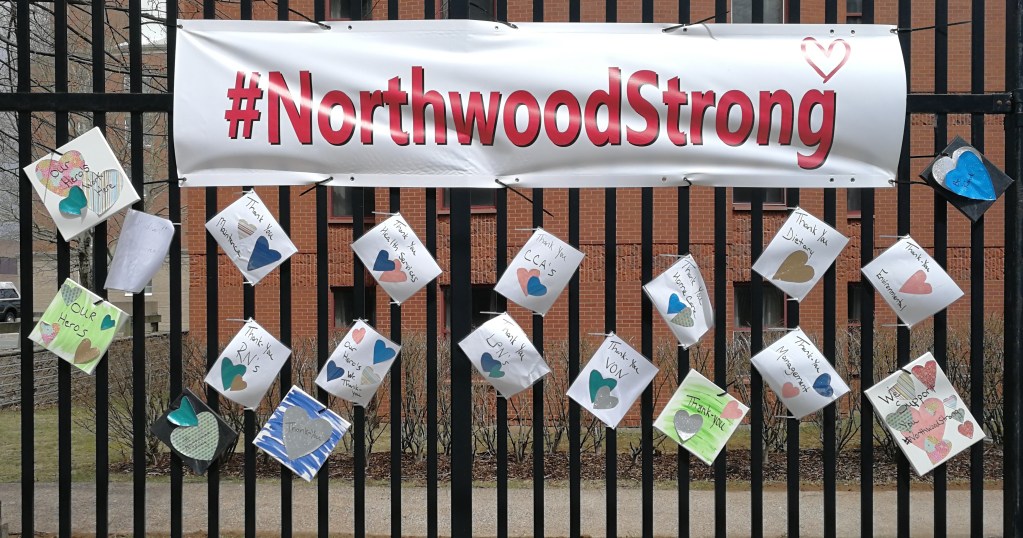 Signs of appreciation for frontline workers are attached to the fence outside the Northwood seniors’ complex in Halifax on April 22, 2020. Photo: Erica Butler.

Despite renewed calls from the president of the largest public-sector union in the province, Premier Stephen McNeil is not prepared to call a public inquiry into the deaths of 53 residents at the Northwood nursing home. But in a new development, the Premier says he will look into whether the president of the Nova Scotia Government Employees Union (NSGEU) could be permitted to make his remarks public without fear of being prosecuted.

It’s a bizarre situation which has arisen since the government chose to use the Quality Improvement Information Protection Act to explore what happened at the 485-bed nursing home in Halifax. 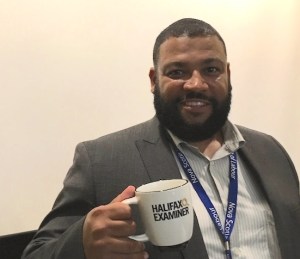 As president of the NSGEU, Jason MacLean represents registered nurses (RNs) at the Halifax Infirmary who were called to respond to an emergency at Northwood during the outbreak of COVID-19.

In a news release on Thursday, the NSGEU announced MacLean will not be taking part in that review, saying it “restricts anyone who appears before the committee from sharing that same information publicly, and threatens them with risk of fines and prison time.” The release said:

Last week, MacLean was invited to speak with members of the review committee about our members’ experience working at Northwood during the first wave of COVID-19. Just hours before that meeting, the NSGEU received an email from a committee staff person stating that, “Any quality improvement information, is protected from disclosure under the Quality Improvement Information Protection Act.”

This means that any information provided to the committee immediately becomes a secret and cannot be provided to the public in any form, not even through the province’s Freedom of Information Act. A person releasing information is subject to a maximum fine of $10,000 and up to six months in prison.

“The NSGEU accepted the invitation to work with the review committee so we could share the experiences of our members. The NSGEU stands with the 53 families who lost loved ones during the first wave of the COVID pandemic,” says MacLean. “We strongly believe that the public interest is best served by holding a public inquiry, fully disclosing all information, so the families, seniors, staff and Nova Scotians get the answers they deserve.”

In light of the secrecy surrounding the current review process, President MacLean made the difficult decision to decline speaking with the committee. Instead, the details he was prepared to provide to the committee are being compiled into a detailed report, which we plan to release publicly next week, along with an 800+ page FOIPOP document. The report and FOIPOP document outline not just the events at Northwood in April of this year, but also provides a context into government’s decisions leading up to the spread of COVID-19 in Nova Scotia.

“The residents of Northwood, as well as their family members, facility staff, and all Nova Scotians, deserve to know what led up to the tragic deaths at this facility,” says MacLean.

In light of the Provincial government’s newfound support for public inquiries, the NSGEU is renewing its call for Premier Stephen McNeil to also launch a full public inquiry into the deaths of 53 residents at Northwood this spring.

That call was supported by NDP leader Gary Burrill, who says MacLean’s unusual situation shows the review process is inadequate to deal with an experience that caused a lot of people a lot of pain, including the 7,000 seniors in Nova Scotia’s long-term care facilities who lived through the lockdown, as well as the families of the COVID-related victims. He says the same arguments apply that were used to demand a public inquiry into the mass shootings last April.

“The central difference between an inquiry and a review is that a review is conducted in secret and  it doesn’t carry the authority and scope to match the gravity and scale of what was a terrible experience,” said Burrill. “A great price has been paid in the long-term care sector and from my point of view, a public inquiry is the only way to honour it.”

The NSGEU’s president told the CBC the decision by the province to enlist a review of Northwood instead of a public inquiry amounts to “a coverup.”

The premier was asked to respond to the use of that term. “That’s Jason,” McNeil told reporters after Thursday’s cabinet meeting. “What can I say? We brought in people to find the answers the families want. It’s not helpful when the rhetoric starts. These are people’s lives in the health-care system we are trying to improve.”

Burrill was critical of the premier’s response.

“I thought that was patronizing and disrespectful,” said the NDP leader. “I think people hearing that said of the president of their union — who is speaking for them in their experience of having worked through the pandemic — I think they would rightfully feel very cross.”

MacLean says in the absence of a public inquiry, he is preparing to compile his remarks for the panel — along with an 800+ page FOIPOP document — which he plans to make public in the next week or so. MacLean claims this will provide context for the Province’s decisions leading up to the emergence and spread of COVID-19.

Meanwhile, McNeil says he will do some research on whether MacLean needs to worry about being penalized if he shares his knowledge. “I will go back and ask the question why that provision of the Act (around prosecuting people who speak publicly) needs to be enforced,” said McNeil. “We may be able to allow anyone who wants to participate to make their own testimony public. We may be able to make that happen. I’ll get back to you on that.”